When we think of Samuel van Hoogstraten, several memorable paintings come to mind, and also his treatise, one of the key texts on art of the period. His significance is further heightened by the fact that he was a pupil of Rembrandt. He was evidently an enthusiastic presence in the studio, absorbing theory, technique and style. He developed a formidable dedication to the art of painting. He went on to share his knowledge as he worked and taught in various cities in the United Provinces, as well as abroad, and through his treatise. In 2024-25, the Rembrandt House and the KHM Vienna in cooperation, together with several partners, will be presenting his life and work in two exhibitions, accompanied by various publications.

Van Hoogstraten came to Rembrandt at the earliest in 1642 with considerable training already under his belt, from his father the painter Dirck van Hoogstraten. He stayed on as a pupil until 1646, and probably as a teaching assistant, until around 1648. In 1651 he embarked on a journey to Italy, by way of Germany and Austria, working along the way, and rounding off his education. He famously received a gold chain from Emperor Ferdinand III in Vienna for the delightfully deceptive illusionism of a trompe-l’oeil painting. Periods in England and in The Hague followed, but otherwise he lived and worked in his native Dordrecht. In his final years, he wrote the Inleyding tot de hooge schoole der schilderkonst: Anders de zichtbaere werelt (Introduction to the Academy of Painting; or, The Visible World), published in the year of his death, 1678. 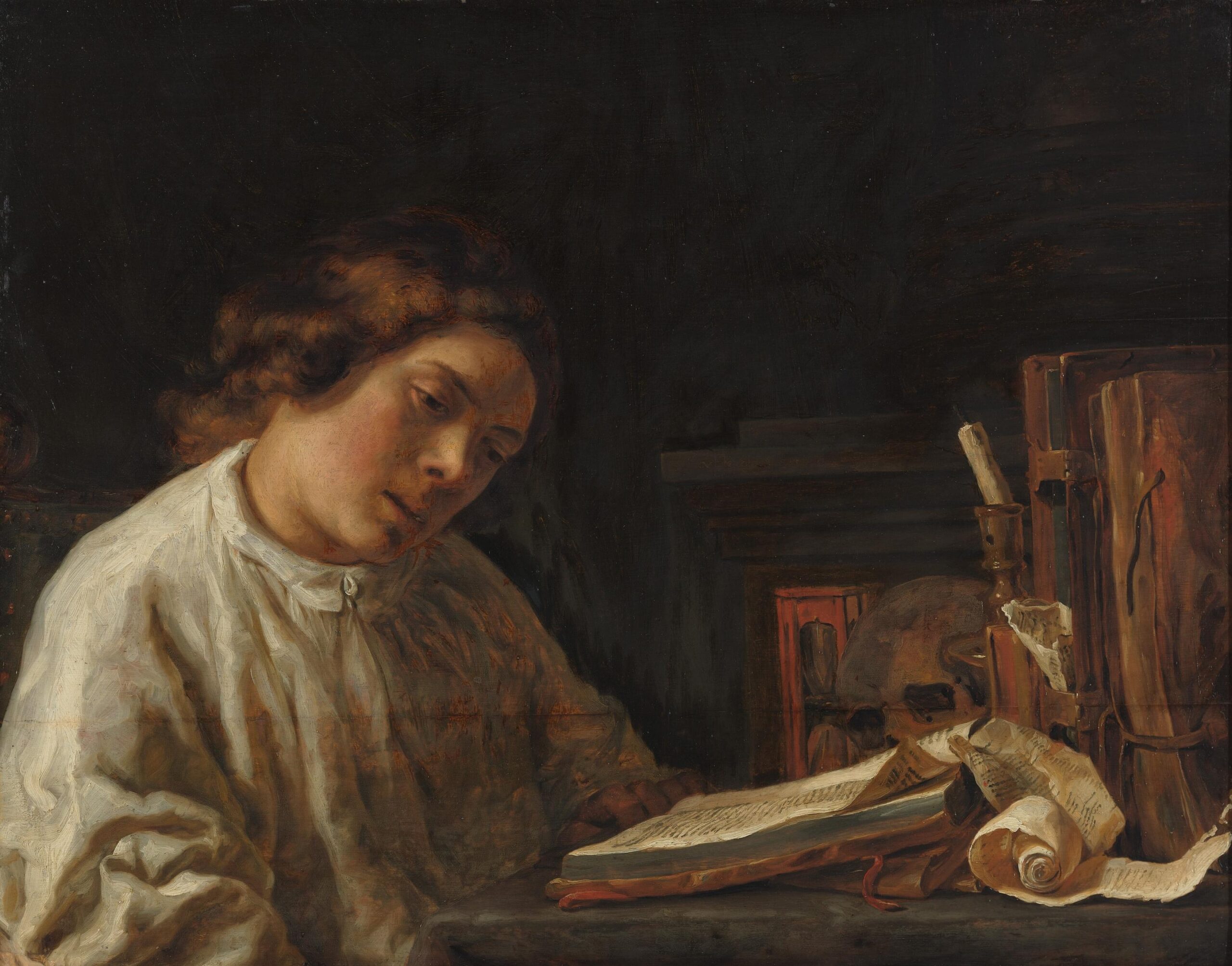 Van Hoogstraten created a number of iconic works, such as his Perspective Box in London, The Slippers in Paris, and his Head of an Old Man in a Window in Vienna. Also well known are his architectural perspective views, genre scenes and letter racks. He saw himself as a universal artist, depicting the entire visible world, including history and allegory. Houbraken claimed that he obsessively sought to outdo all specialists at their own game. In each case, Van Hoogstraten focused on conjuring the pictorial illusion of visible reality. At the same time, he was no stranger to idealization, which is most evident in his portraits and allegories. As a draftsman he produced numerous narrative subjects, continuing an established practice in Rembrandt’s workshop. Some of the famous male nude studies from Rembrandt’s studio from the 1640s are by his hand. 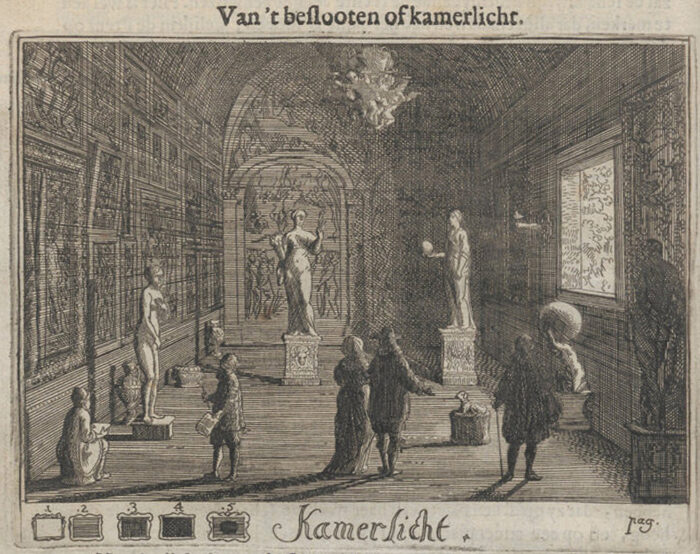 However, Van Hoogstraten is primarily known for his treatise, in which he presents the sum total of his knowledge of painting, likely based on notes accumulated during a lifetime of work, study, and teaching. He organized his insights into nine chapters, or “shops”, each presided over by one of the Nine Muses. History painting, for example, falls under Thalia, the Muse of Comedy. Memorable passages include his description of theater performances to enhance our understanding of emotions in historical scenes, his illustration of chamber light using numbered tonal values, and his recommendation of a “shadow theater”, also illustrated. His text is equally known for criticizing his teacher Rembrandt, often from a classicist standpoint, for example with respect to his realistic, unidealized nude studies.

Samuel van Hoogstraten: a Collaborative Project actually comprises several components. Parallel to the exhibition, we are working on a number of additional projects, for which we have sought collaborations with other institutions and professionals. These include technical research into the paintings by Van Hoogstraten, a catalogue raisonné in collaboration with the RKD, and a partnership with the Kunsthistorisches Museum in Vienna.

Rembrandt’s pupils became part of a new trajectory on which the Rembrandt House Museum embarked in 2015 with the exhibition Rembrandt’s Late Pupils. That exhibition explored Rembrandt’s role as a teacher, and the contribution and achievement of his pupils. Not long after, the museum hosted an overview of the life and work of Ferdinand Bol and Govert Flinck, in collaboration with the Amsterdam Museum. By then the idea had also formed of an exhibition devoted to Van Hoogstraten as artist, thinker and teacher. 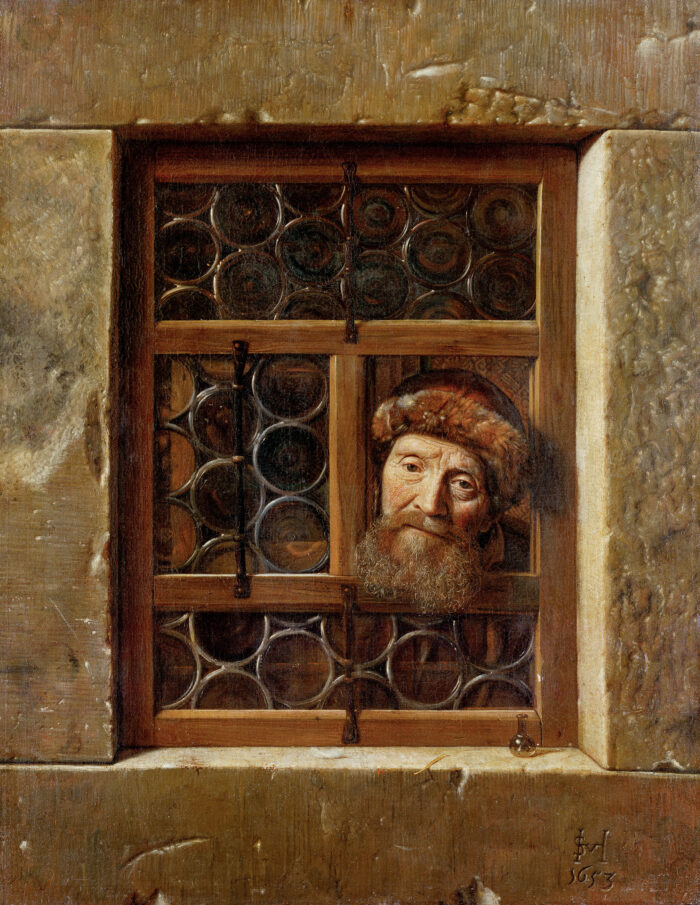 At the Rembrandt House Museum, paintings, drawings, prints and books will tell the story of the artist’s life and work, in a mixed presentation. Loosely following chronology, it will open with the young Van Hoogstraten, starting under his father in The Hague, encountering Rembrandt’s teaching first hand and adsorbing the master’s aesthetic and theoretical lessons. It will address Van Hoogstraten’s distinctive focus on the convincing illusion of depth in a shallow space, from its likely inspiration in the Night Watch to its evident application in his famous letter rack paintings. It follows Van Hoogstraten’s subsequent propagation of these ideas in various masterpieces created on travels in Vienna and London, including his remarkable Head of an Old Man in a Window. The famous Perspective Box in London will also appear, in facsimile. A third section will show the artist established in his native city of Dordrecht, covering a wide range of subjects, expanding to architectural views and jumping into the competitive market for interior genre scenes. Hoogstraten’s treatise will be introduced with the help of didactic texts and visuals that highlight his main contributions, and point to some of the lessons he had learned from Rembrandt, such as Kamerlicht. 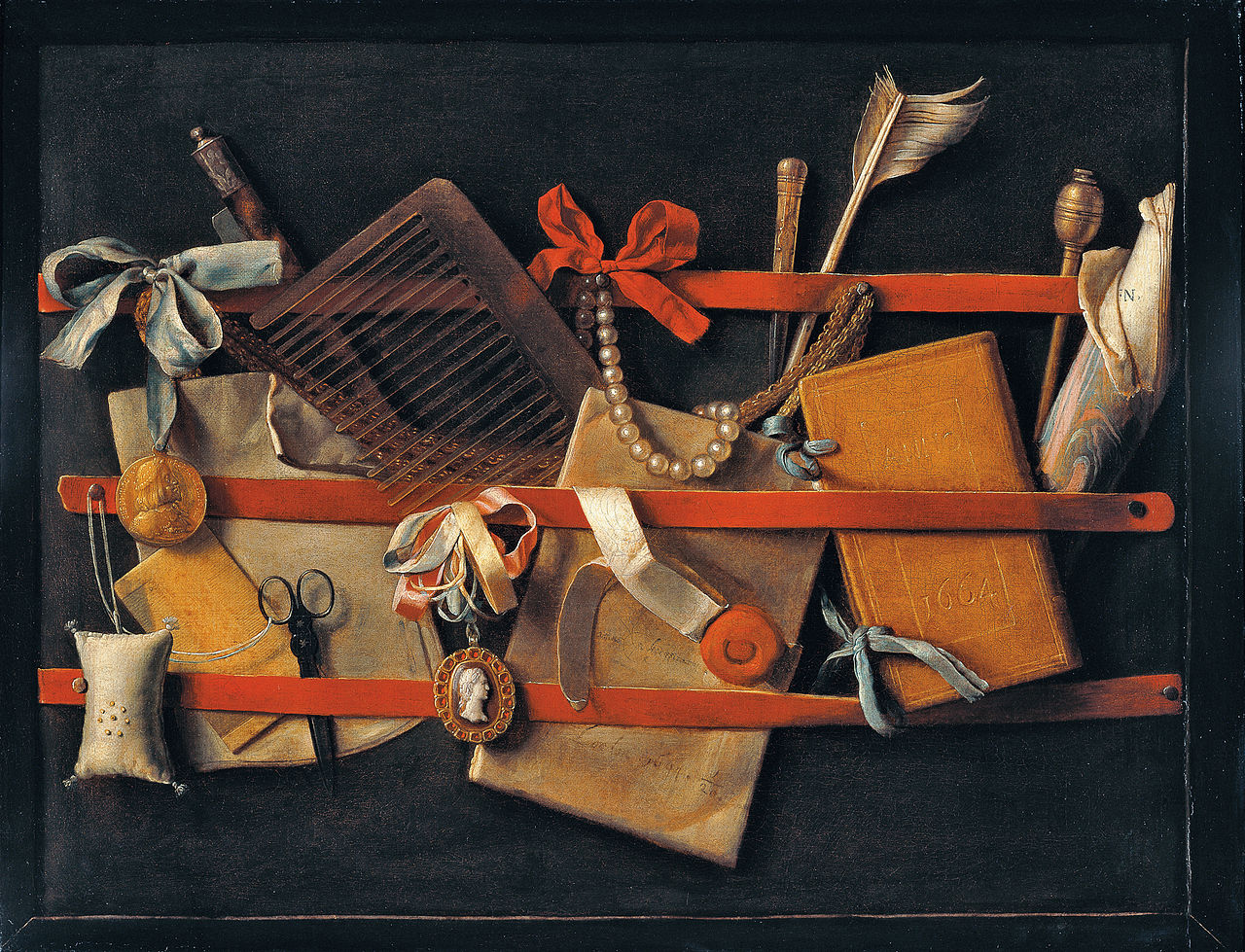 For the first time, the Kunsthistorisches Museum in Vienna is dedicating an exhibition to Rembrandt and has chosen to present the master from the vantage point of his important pupil Samuel van Hoogstraten. In Inleyding tot de hooge schoole der schilderkonst, Van Hoogstraten reflects on his time as a pupil in Rembrandt’s studio, giving us unique insights into the master’s oeuvre, workshop practices, training methods, and art theory. The show offers a critical appraisal of Rembrandt’s art, particularly with respect to the force of his color and strong illusionism of his paintings. 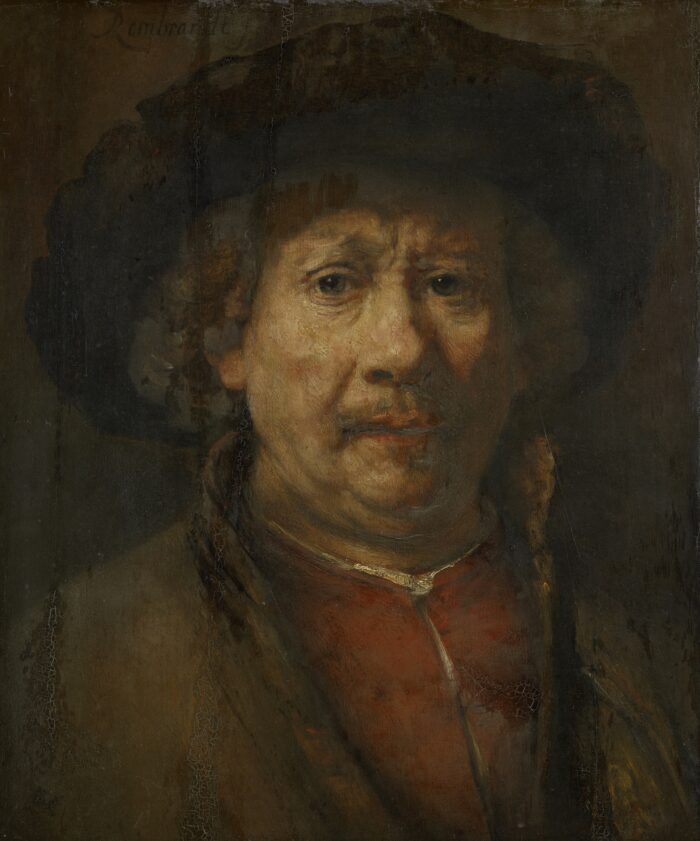 The exhibition begins with Rembrandt’s early years in Amsterdam during which the master became the city’s foremost portrait painter. Next are examined the years c. 1642-1648, when Hoogstraten worked in Rembrandt’s studio. Works in which each artist explores his own image and stages a stunning virtual reality are shown side by side. The next section is dedicated to Van Hoogstraten’s stays in Vienna, where shortly after his arrival in 1651 he was granted an audience with Emperor Ferdinand III, a pivotal event in his career. Van Hoogstraten is the only seventeenth-century Dutch painter to report on his experience of a camera obscura. In collaboration with the Austrian Academy of Sciences, we will examine A View of Hofburg Palace to determine if and how Van Hoogstraten used optical devices, and explore the research on perspective carried out by the Jesuits in Vienna in the mid-seventeenth century. Van Hoogstraten’s interest in perspective culminated in the creation of perspective boxes and large-scale perspectival views. The KHM will show a 3D reconstruction of the Perspective Box in London in an interactive room so that visitors to the exhibition can experience it in its full glory.

The final section illustrates Van Hoogstraten’s critical appraisal of his master and considers his role in spreading Rembrandt’s fame. Special attention is given to Rembrandt as ideal painter of passions and the inventive Rembrandt’s specific use of colors, light, and shadows until his late period.

The exhibition offers new insights into Rembrandt’s oeuvre, exploring themes, compositions, and handling characteristics of the master from the vantage of contemporary art criticism. It also presents the work of Rembrandt’s eclectic pupil Samuel van Hoogstraten for the first time in this context. Paintings by both artists are juxtaposed, revealing the stylistic evolution of Rembrandt’s pupil as he develops his own manner, retracing the fascination for virtual reality against the background of spiritual currents of the time. The provenance and the original installation of the paintings by Rembrandt and Van Hoogstraten in the imperial collection reveal the contemporary estimation of their art in the courtly context. 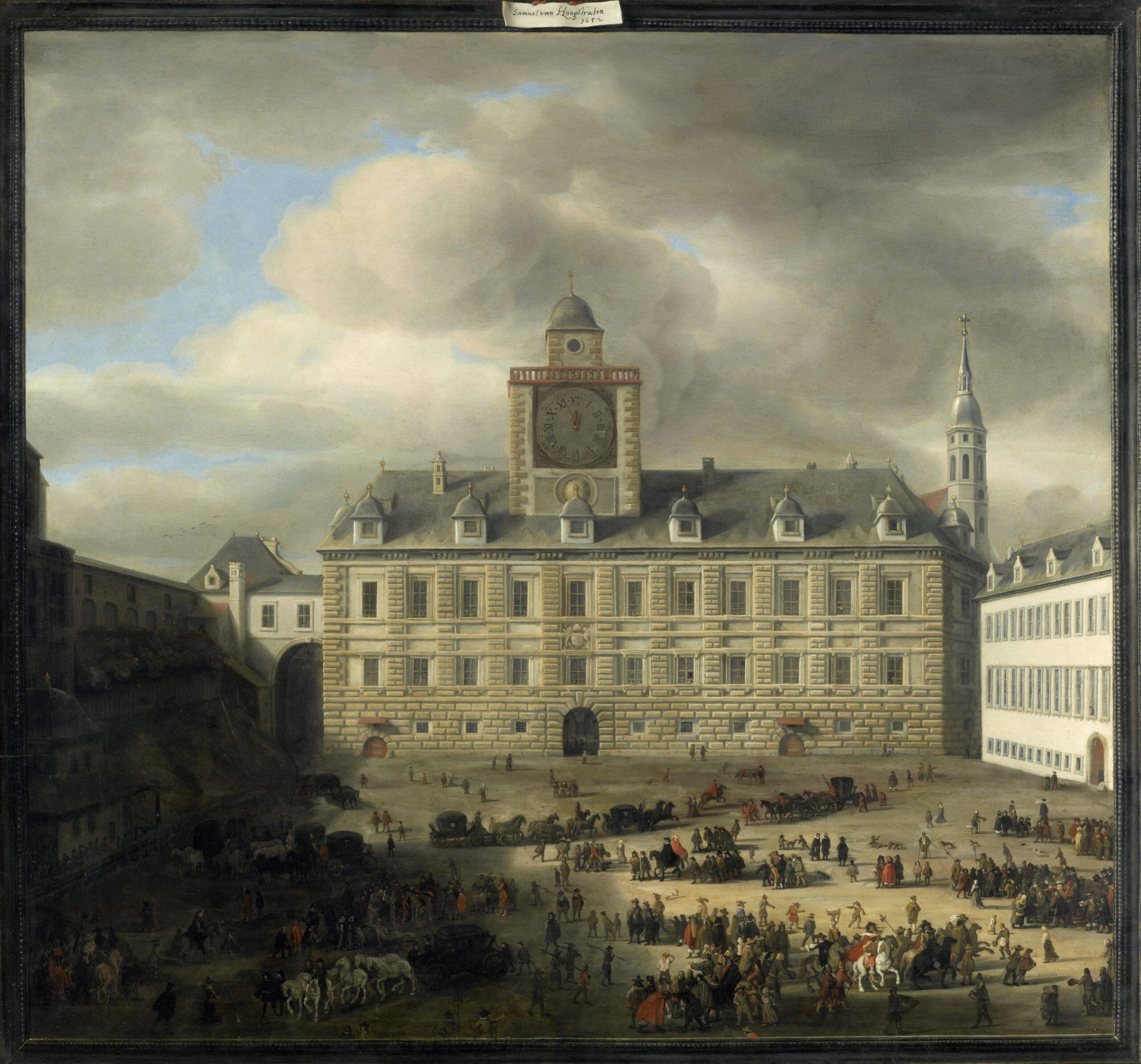 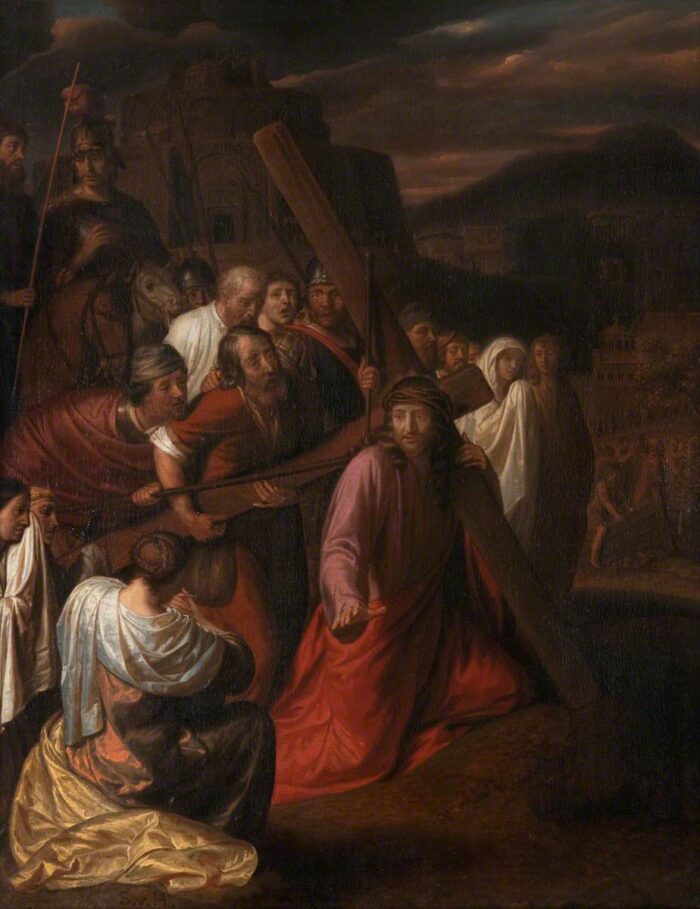 With all the research to date on Van Hoogstraten, it is surprising that his painted oeuvre has never been subject to systematic technical examination, also not in relation to his own writings. Van Hoogstraten’s treatise has a strong practical element which so far received relatively little attention. Technical research of his paintings may provide new insights into the artist’s practice. In fact, in many of his works he seems to explore how to adapt his technique to different types of paintings. Technical research by Erma Hermens and Peter Black of Christ and the Women of Jerusalem (Hunterian Art Gallery, Glasgow) has indicated that he used a quartz ground similar to that in Rembrandt’s Night Watch. This is an interesting result in the light of the more technical descriptions in Van Hoogstraten’s treatise which, as sometimes has been suggested, may reflect Rembrandt’s practice. A selection of Van Hoogstraten’s works will be subjected to a range of analytical and imaging techniques such as Ma-XRF scanning, IR-imaging, X-radiography, as well as paint cross-section analyses. The results will hopefully give insights into the context of how Van Hoogstraten’s manner of painting developed and how they relate to his theoretical ideas, his education under Rembrandt, his travels abroad, and his interaction with Dutch artists after his return to Dordrecht. This will allow us to delve deeper into his technical experiments. Prof. dr. Erma Hermens, director at the Hamilton Kerr Institute and deputy director at the Fitzwilliam Museum, will be in charge of the Van Hoogstraten technical research project.

Simultaneously the KHM Vienna has started a campaign to analyze the works of both Rembrandt and Van Hoogstraten in the Kunsthistorisches Museum Vienna. The aim is to expand our understanding of the artists’ intentions (e.g. the works’ original colors). Technical analysis of the works of both painters will be put into the context of Van Hoogstraten’s art theoretical writings on perspective, color and light. With this initiative we hope to motivate institutions holding paintings by Van Hoogstraten to join us in our research, and we hope it will inspire further research in the future.

To date, there has been no complete overview of Van Hoogstraten’s oeuvre. As happens more often with the works by Rembrandt-pupils, every now and then works of art appear on the market which were not known before. New insights yield new attributions, and for this reason a more fluid form for an oeuvre catalogue seems to be appropriate. In order to achieve this we have engaged in a collaboration with the RKD. We are aiming to update all the data which are already available via the RKD-website and databases, as well as other sources, and rework this material into a comprehensive and easily accessible online catalogue, including not just his paintings, but also his drawings and prints. All sections will be accompanied by short essays. If available, technical data will also be included.