This article was originally published in the CODART eZine, no. 6 Summer 2015

The painting of Saul and David shows two figures against a dark background. At left is Saul, seated, holding a spear and wiping his eye on a curtain. David, playing his harp, kneels before him at right. The subject is usually considered the moment before the frenzy of King Saul, which twice caused him to hurl his spear at David (I Samuel 18:9-11). This was an unconventional choice of subject, as most other artists opted to show Saul’s fury (fig. 1). 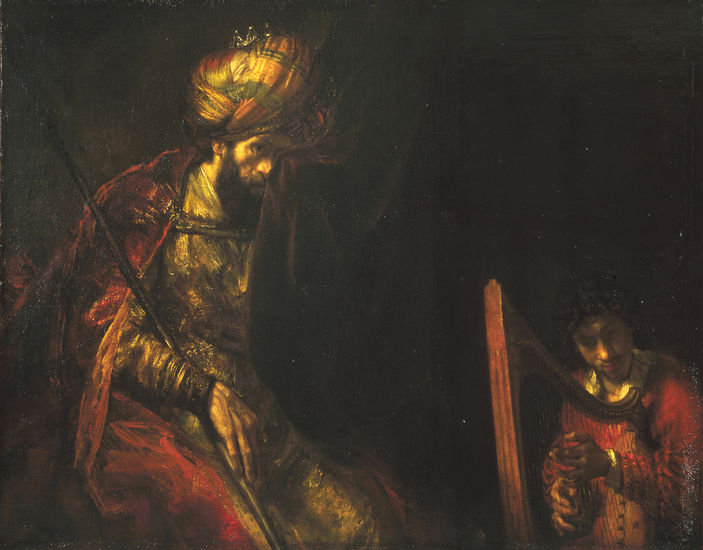 We can trace the provenance of Saul and David to 1830, when it was sold as a painting by Rembrandt from the collection of the Austrian Duke of Caraman in Paris. It remained in Paris, sold on through various auctions, until it ended up with the dealer Durand-Ruel in 1869. It then passed from collection to collection, until it was back with Durand-Ruel between 1891 and 1898. The dealer apparently had trouble selling the painting, and in his search for a buyer, he even took it to the United States, where it was exhibited in New York and Chicago in 1893. It was not until 1898 that Abraham Bredius, then director of the Mauritshuis, bought Saul and David and immediately placed it on loan to “his” museum, which received it by bequest upon his death in 1946.

The authorship of Saul and David was a bone of contention before it entered the collection of the Mauritshuis, but it became one of Rembrandt’s most admired works, mainly because Abraham Bredius championed it. The bubble burst in 1969, when Horst Gerson de-attributed the work. To no small extent, this assessment was due to the painting’s condition. Although structurally sound, it looked the worse for wear. As is well known, at some point in the past the figures of Saul and David had been cut apart and rejoined, and a large piece of canvas had been added above the head of David. The picture was dark and uneven in texture.

Saul and David was studied thoroughly in the 1970s, and much valuable technical information appeared in a book titled Rembrandt in the Mauritshuis.1 In 2007, the Mauritshuis initiated a new scientific examination of Saul and David in order to understand the true condition of the painting before embarking on conservation treatment. The Mauritshuis assembled an international committee of experts to provide advice.2 Petria Noble – formerly Head of Conservation at the Mauritshuis, who initially led the research project – started the conservation treatment. Carol Pottasch and Susan Smelt took over when Petria assumed her current position at the Rijksmuseum in September 2014. Much of the research described below was conducted as part of an NWO-funded project on non-invasive imaging techniques used to examine late Rembrandt paintings (“ReVis Rembrandt”).

We now know that the format of Saul and David was originally different from what it is today, but reconstructing it proved to be a challenge. Discrepancies in the measurements of the paintings listed in auction records tell us that the picture must have been fashioned into its current format at some point between 1830 and 1869.

Re-examination of X-radiographs taken in the 1970s revealed that the painting currently consists of no fewer than fourteen separate pieces of canvas. When the figures of Saul and David were rejoined, a large square measuring 53 x 52/51 cm was added above David’s head in order to replace the lost piece. Gregor Weber of the Rijksmuseum identified this canvas, which had clearly been cut from an old painting, as a piece – turned upside down – of an early copy after Anthony van Dyck’s Portrait of the Archduchess Isabella Clara Eugenia, Regent of the Netherlands, Dressed in the Habit of the Poor Clares.3 The three pieces were assembled using a very unusual notched join that is, so far as we know, unique in the history of restoration. Narrow strips of canvas – added to the upper, lower and right edges in order to enlarge the picture – are held in place by the lining. An original horizontal seam, clearly visible in the X-radiograph, runs through the figures of both Saul and David, indicating that the two parts of the painting were properly aligned when the pieces were assembled (figs. 2 and 3). 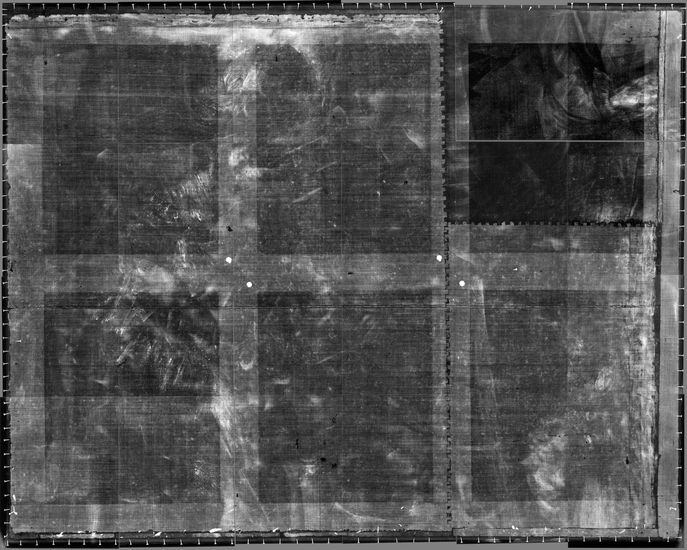 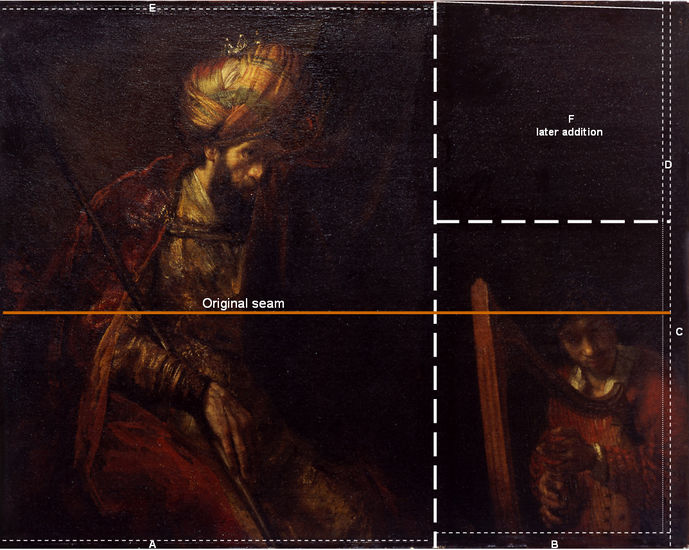 3. Construction of Saul and David. Added strips are labelled A,B,C,D,E and the later insert, F.

The X-radiograph also reveals on three sides substantial deformations known as “cusping,” caused by the initial stretching of the linen support on a frame. Computer analysis – using “false-color weave angle maps,” which graph the deviation of the angle of the warp and weft threads in the linen support respective to the true vertical and horizontal – indicates that the bottom of the canvas was cut down by at least 10 cm, but that only a few centimeters were trimmed from the top edge. A comparison of the pitch of the cusping at the left and right edges of the weave angle map of the weft threads suggests that about 5 cm has been lost at the left and that the original right edge of the David segment is intact (fig. 4).4

The height of the upper piece of canvas without the added strip measures 71 cm, corresponding to a standard loom width of one ell, whereas the lower piece measures 55 cm. This makes it likely that the painting originally consisted of two pieces of linen, each one ell in width, joined by a horizontal seam, and that most of the missing canvas was at the bottom. It was previously assumed that anywhere from 10 to 15 cm were missing between the two pieces of canvas, but close examination of the vertical seam revealed that the brushstrokes over the join are almost continuous, leading to the conclusion that approximately 2 to 5 cm are missing − a result of dividing the figures and later rejoining them.5 At the time of writing, we are still working on a plausible reconstruction of the original format. This, in turn, will have a significant impact on our perception of the figures of Saul and David and their spatial orientation in the composition (fig. 5). 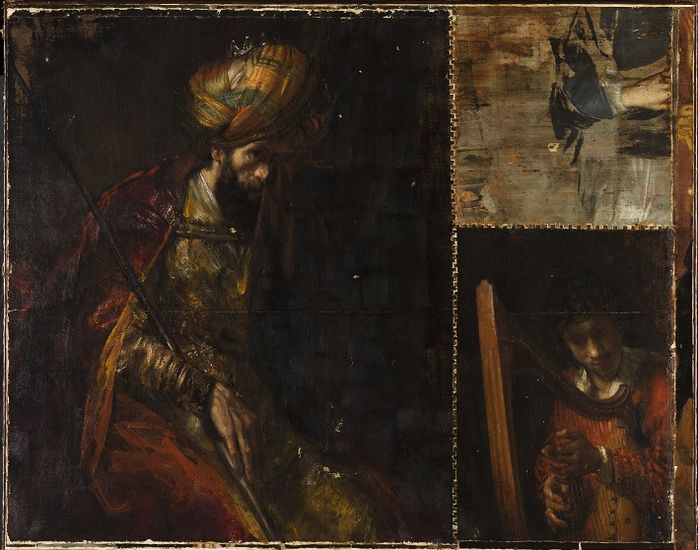 5. After removal of varnish and overpaint, before retouching.

Horst Gerson, who de-attributed Saul and David in 1969, was particularly critical of the curtain between the two figures. Rembrandt scholar Volker Manuth initially doubted the authenticity of the curtain on iconographic grounds. Two investigative techniques proved useful in assessing this issue. First, paint sample analysis demonstrated that the ground characteristic of paintings produced in Rembrandt’s studio in the 1650s and 1660s and the build-up of the paint – containing smalt, red lake and earth pigments − were the same in the entire area of the curtain. Secondly, macro X-ray fluorescence analysis (MA-XRF), carried out with a mobile device developed by the universities of Antwerp and Delft, provided elemental distribution maps of the curtain area. Distribution maps of the elements cobalt, nickel and arsenic – present in smalt – were particularly effective in providing an image of the curtain that is literally hidden below the overpaint and discolored varnish. The results exceeded all expectations. They established that a curtain is part of the original design and, except for a few scattered losses at top and bottom, is still largely intact. Since cleaning, the curtain is very much visible (fig. 6). 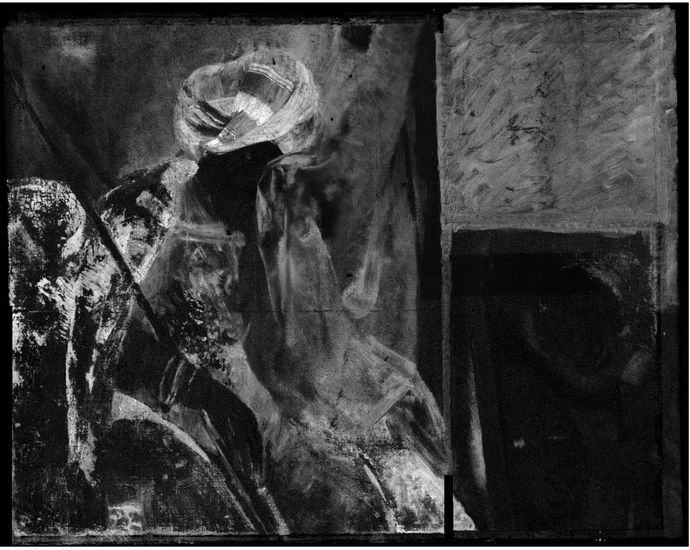 In 1969, many eminent scholars, including Jakob Rosenberg, criticized Gerson’s rejection of the painting. In 1978, De Vries, Tóth-Ubbens and Froentjes argued that the stylistic inconsistencies in the picture could be explained by the fact that Rembrandt painted it in two phases, in the mid-1650s and the mid-1660s. Yet weaknesses in the painting convinced other scholars that it could not have been painted by Rembrandt. Given the results of paint sample analysis, we can be certain that the picture was painted in Rembrandt’s workshop, since the ground and composition of the paint are consistent with other works by Rembrandt and his workshop. Ernst van de Wetering, a member of the international advisory committee for Saul and David, has published the work as entirely by Rembrandt, executed in ca. 1646 and ca. 1652, in the most recent volume of A Corpus of Rembrandt Paintings.6

There are, however, still some unanswered questions concerning the dating and the authorship of the second campaign. We know of several collaborative paintings or paintings retouched by the master, and this idea has increasingly gained acceptance among Rembrandt experts. Ongoing research is intended to address the possibility that Saul and David was finished in the workshop by a pupil. The results of all the conservation treatment and the research, including the authorship question, will be made known in an engaging, interactive exhibition that will make use of new media technologies (fig.7). The story will be presented as an exciting “crime scene investigation” that is intended not only to unveil the newly conserved painting, but also to engage a broad public with the latest in investigative techniques in our field. “Rembrandt? The case of Saul and David” will take place at the Mauritshuis from 11 June to 13 September 2015. Emilie Gordenker was Director of the Mauritshuis until 2020. She has been a member of CODART since 2003.