This article was originally published in the CODART eZine, no.6 Summer 2015.

The Patrimonio Nacional tapestry collection is comprised of 3,000 pieces, ranging from Flemish tapestries treasured by the Hapsburg monarchs and Spanish tapestries made for the House of Bourbon, to preserved collections from the Royal Monasteries and Palaces of Las Huelgas (Burgos), Las Descalzas (Madrid), and the Colegio de Doncellas Nobles (Toledo).

Since the nineteenth century, scholars and historians have considered this collection to be the most representative of Flemish production in the whole of Europe. It includes more than five hundred masterpieces from the main workshops in the Netherlands: Brussels, Bruges and Antwerp. It also includes worksfrom French factories in Paris and Beauvais, the Arazzeria Medicea in Florence and the factory at the St. Michael’s hospital in Rome.

The Hapsburg and Bourbon monarchs who ruled Spain considered the tapestries to be treasures representing royal authority, and saved them from being dispersed in the regular sales that took place during the execution of wills. The tapestries from the Renaissance period date from the reigns of Isabella I of Castile (1451-1504), Joanna of Castile (1470-1555), Holy Roman Emperor Charles V (1500-1558) and Philip II (1527-1598). These monarchs enlarged the collection with the celebrated devotional pieces known as the Golden Tapestries, and with monumental series such as The Honours, The Conquest of Tunis and The Apocalypse – tapestries more than five by ten metres in size. These tapestries have historical and allegorical subjects, based on iconography catalogued by humanists, historians and painters of the Court, and were conceived of as reflections of princes andchronicles of their conquests.

The Royal Collection was continuously enriched through inheritance and commissions. Its unity was maintained thanks to legal provisions established by Philip II who linked the Collection to the Crown. The tapestry series added during the reigns of his successors Philip III (1578-1621), Isabella Clara Eugenia (1566-1633) and Philip IV (1605-1665), show the Baroque style of the Counter-Reformation. They include The Triumph of the Eucharist, demonstrating the change in taste and the introduction of new techniques associated with the tapestries designed by Rubens.

The second large group, comparable to the Flemish collection, consists of 800 pieces produced in Spain itself. The tapestries woven at the Royal Tapestry Factory in Madrid, founded by Philip V (1683-1700), were to become part of the decorations of the royal living quarters in the Royal Palace in Madrid and in the seasonal palaces at La Granja de San Ildefonso, Aranjuez, El Escorial and El Pardo. Francisco de Goya’s continued work as a painter between 1775 and 1792 nationalised the Factory’s work and highlighted the importance of its contribution in relation to that of other factories in the eighteenth century. This eighteenth century collection also includes woven carpets made for Charles III (1716-1788), Charles IV (1748-1819) and Ferdinand VII (1784-1833) to cover the marble floors of the royal family’s seasonal palaces at Aranjuez, El Pardo and El Escorial.

Tapestries of The Story of Noah and Ovid’s Fables provide the backdrop for a military ceremony featuring the Regimiento del Rey de Madrid (King’s Regiment of Madrid), presided over by Alfonso XIII and Victoria Eugenie of Battenberg, King and Queen of Spain, along with Alfonso, Prince of Asturias, Madrid, 4 July 1924. Royal Palace archives, FODI, 34725.

The tapestries played an important role in the decoration of the court in various displays of public life and royal etiquette. The tapestries were essential to a wide variety of ceremonies and festivals, from triumphal entrances and coronations to banquets, tournaments, canonisations, baptisms and royal betrothals.They also enjoyed a special status both in public and private spheres, which has endured to this day.

From the sixteenth century onward, special conservation measures were taken in order to protect this precious collection from the deterioration it suffered as a result of ageing and the continuous use in royal and liturgical ceremonies. According to Burgundian etiquette, the cleaning, beating, lining and repair of the tapestries were the responsibilities of the Real Oficio de la Tapicería (Royal Wardrobe). This Office was charged with keeping the tapestries. It hung and took down the tapestries in the royal chambers according to the change of the seasons, transported them when the court left for other palaces and hung them on the façades for events such as the Corpus Christi procession.

From the eighteenth century up to the middle of the twentieth, these important tasks were executed by the Royal Tapestry Factory, which was in turn replaced in 1941 by the Fundación Generalísimo Franco-Industrias Artísticas Agrupadas (General Franco Foundation-Unified Artistic Industries), later known as the Fundación de Gremios-Industrias Artísticas Agrupadas (Guilds Foundation-Unified Artistic Industries). This situation meant that Patrimonio Nacional did not have its own tapestry restoration workshops, so since the transformation and eventual disappearance of these institutions in 1995, the restoration of the Royal Tapestry Collection has been carried out by private businesses under the supervision of Patrimonio Nacional. 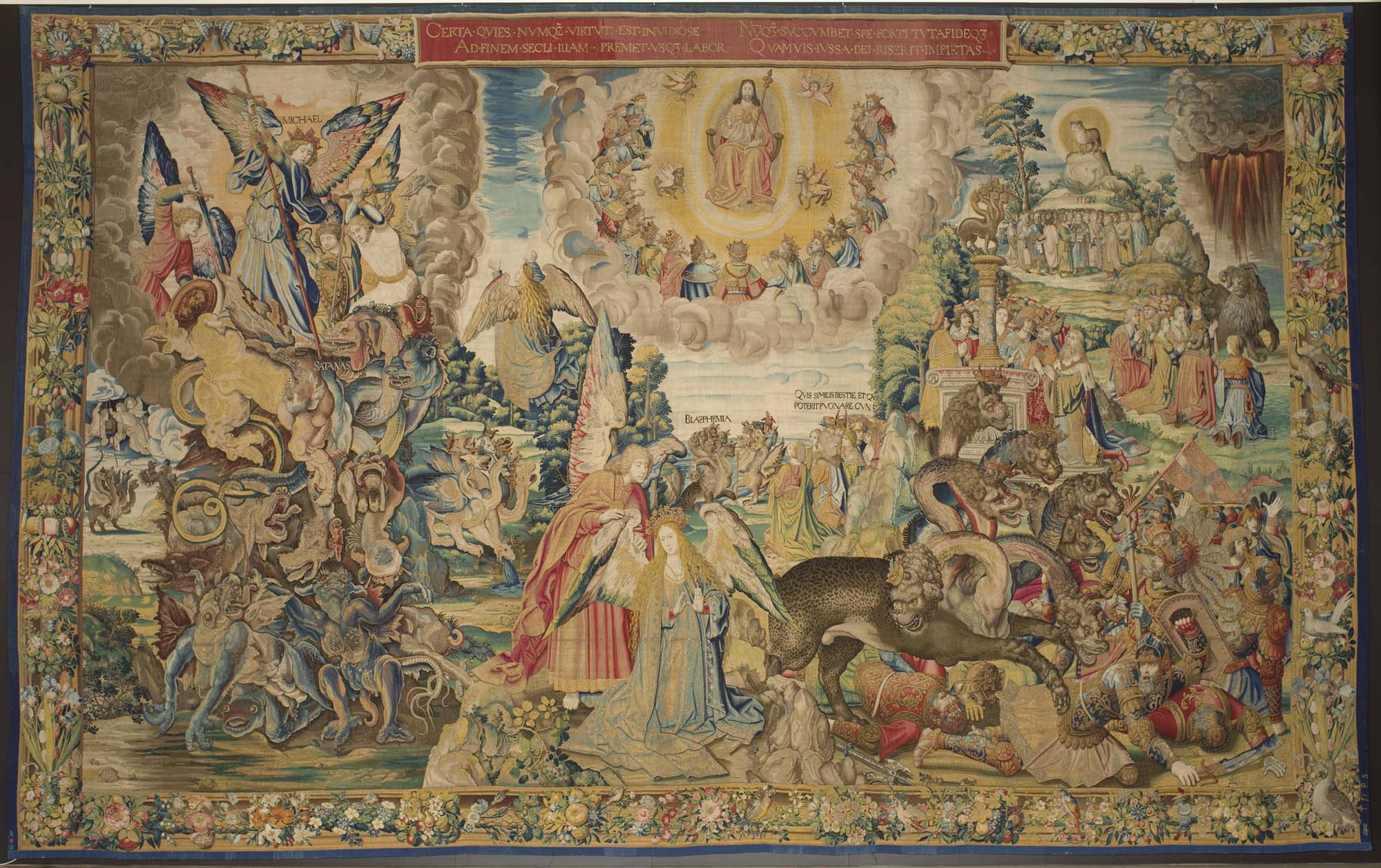 The quality and resilience of the wool and silk fibres, the purity and structure of the metallic threads and the solidity and boldness of the dyes used are important characteristics of this collection, as they are the principal reason for its durability and resistance to ageing. Nevertheless, some deterioration (currently irreversible) can clearly be observed and has been caused by the use and treatment of the tapestries. This deterioration includes some fading of the colours on the front of the tapestries, due to exposure to daylight for generations, and the oxidation of silver alloys and metallic threats woven into the works. The structures of the textiles are slighly deformed due to the way in which they used to be, which also perforated the fabric. They have also been warped and creased as a result of the old storage system which was in use until 1986.

Recent years have seen more efficient conservation methods come into use, such as the creation of a Tapestry Warehouse at the Royal Palace with compact storage cases made up of anti-tilt cylinders and drawers designed to ensure risk-free storage. The reinstitution of the permanent exhibition spaces at the Museo de Tapices at La Granja de San Ildefonso, the Salas de Honor at the San Lorenzo del Escorial monastery and the Salón de Tapices at the Descalzas Reales monastery have been are designed for both educational exhibition and conservation purpose. Furthermore the participation in international, interdisciplinary research projects like Monitoring of Damage to Historic Tapestries (Historic Royal Palaces, Institut Royal du Patrimoine Artistique (Belgium), University of Manchester, National Museum of Scotland, University of Edinburgh, Birbeck College (University of London) and Patrimonio Nacional) and Effects of LED Illumination on Decorations in the Royal Palace, Madrid (CSIC, Instituto Daza Valdés and Patrimonuio Nacional). These projects have highlighted the artistic and material quality of the Spanish Crown’s tapestry collection, while developing protocols and have obtained results which can be applied to monitoring deterioration of the fabric and colours of these celebrated works of art.

Aerial view of Madrid, with the Royal Palace, the Almudena Cathedral and the Royal Collections Museum in the foreground.

The tapestries included in these exhibitions are first-rate cultural documents and true masterpieces. Patrimonio Nacional will give them pride of place in El Museo de las Collecciones Reales (the Royal Collections Museum), which is currently under construction. It was designed by architects Emilio Tuñón and Luis Mansilla, and will be located in the Campo del Moro park, the gardens of the Madrid Royal Palace. It is expected to be opened in the autumn of 2016.

Concha Herrero Carretero is Curator of Tapestries at the Patrimonio Nacional, Madrid. She has been a member of CODART since 2000.