This article was originally published in the CODART eZine, Tefaf-Special no. 0 Spring 2012.

Driving into the small industrial zone in the Veluwe region of the Netherlands, you have no idea that Old Masters are within easy reach, and even after entering Gregor’s premises, it isn’t immediately clear what kind of workshop this is. The production line of a picture frame for a Cuyp from the Dordrechts Museum or for a Rembrandt from the Hermitage fits nicely into one large, well-ordered workspace. 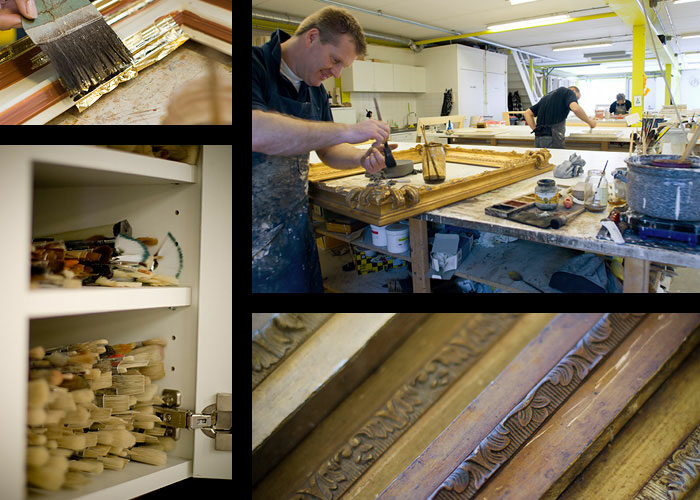 In the Netherlands serious research has been going on since the 1980s on seventeenth-century Dutch picture frames, research that resulted in 1984 in the catalogue Prijs de lijst and an exhibition of the same name in the Rijksmuseum in Amsterdam. The English translation of this publication appeared in 1995 under the title Framing in the Golden Age. Over ten years later, in 2009, the then ICN (now the Rijksdienst voor het Cultureel Erfgoed, or the Cultural Heritage Agency of the Netherlands) launched the four-year research project Picture Frames in The Netherlands. The project has established a platform for organizing bi-annual meetings, where presentations are given on the history and restoration of frames and discussions take place about the way frames are handled in museums (for the blog and the wiki, visit www.collectiewijzer.nl).

Exactly ten years after the appearance of Prijs de lijst, Gregor Simoons set up his frame-making business in a small industrial premises in Spankeren. He and his team of six assistants make frames for museums, private collectors and art dealers. In 2009 he received a large commission from the Hermitage in St. Petersburg to produce eighteen frames for paintings by Dutch masters. This project, partly financed by the Dutch Friends of the Hermitage, was set up in cooperation with CODART member Irina Sokolova. The result was a special exhibition, mounted by the Hermitage at the end of 2011, on the frames themselves and Simoons’s company. It was also in 2011 that Gregor Simoons decided to become a patron of CODART, which is reason enough for us to interview this exceptional craftsman.

How did you happen to start up such a specialized business?

“I come from a family of framemakers, and I’ve been fascinated by frames since I was a child. But it soon became apparent that my fascination for picture frames went much further than what I could learn at home. There’s no formal course of education for framemakers, so I decided to train for a time with a number of framemakers in the Netherlands and abroad. I spent about six years doing this, learning the craft like a true journeyman: each workshop had its own specialism, and I mastered them all. Not only that, but I was constantly experimenting with my own formulas and compounds, and so I learned to make frames that closely resemble authentic frames.”

“Of course! Whenever I walk around a museum, or visit a depot, first I look at the frames and afterwards the paintings. If I have permission, I take photos of the picture frames and use them later as models. I also collect molds: my collection of molds and ornaments for picture frames is probably the largest in the Netherlands. A couple of years ago, for instance, I received a bequest from Mr. de Jong of Amsterdam that consisted of hundreds of molds from the nineteenth and twentieth centuries. By making silicon impressions of them, I can reconstruct frames and ornaments very precisely. For seventeenth-century frames I consult publications, such as the book Framing in the Golden Age. Customers can also choose from existing models here in the workshop.”

Apart from museum curators, are there people who notice the difference between any old frame and a real Simoons frame?

“I have three kinds of clients: museums, private collectors and art dealers. All my clients receive personal treatment. Private collectors often choose a frame that suits their furnishings or matches the frames of other paintings in their collection. An art dealer will ask for a frame that makes a painting look as spectacular as possible. Museums, on the other hand, are mainly interested in the historical appropriateness of the frame. That development started years ago; today more and more museums are aware of the historical context of the picture frame. Together with a museum, mostly with the curator in charge, I design a frame which, historically seen, is best suited to the painting they want framed. The kind of wood, the ornamentation and the color all play an important role. Naturally it is museum people who first notice the quality of a frame, but I’m sure that museum-goers are also receptive to quality, even if they aren’t always aware of it: a good frame enhances the ‘aura’ of a painting.”

In your opinion, what are the characteristics of a good frame?

“I think it’s important to enhance the painting’s ‘aura.’ It’s hard to describe how to bring that about, but I can see immediately whether or not a painting has a good frame. I want people to be able to look inside a frame. That’s why its construction is important, the type of wood, the colors. It often takes a long time to agree on something with a museum, but again and again it proves possible to supply a museum with a frame that I can put my hallmark on. It might be a very simple oak frame, or a gilded frame with specific ornamentation from the period and the country where the painting originated.”

So you actually represent the Formula One of framemaking.

“Yes, that’s what I’m striving for. That’s why we are always doing research and I often travel around to study old frames. And I always consult my assistants about ways to improve the production line and the working environment. For instance, we’ve developed a special technique for gilding. We do as much as possible by hand. I personally put the finishing touch on a frame by fashioning and adapting the frame to the painting it was made for, by giving it a coat of patina, for instance. The result is a custom-made frame that is perfectly suitable in color and feels right for the painting. I’m convinced that this personal treatment adds a lot to my frames. There is one thing I can’t reconstruct, though, and that is time itself, which is why I can achieve only 97% of the effect of an original frame – even though I strive for 100%.”

You’ve expanded your trade into an international business that collaborates with important museums. How did you succeed in doing that?

Those contacts were initially established through my customers, particularly private collectors. It was a collector who put me in touch with Irina Sokolova of the Hermitage in St. Petersburg, a museum with which we’ve built up a close and very special working relationship. In consultation with Irina, I suggested replacing the gilded and richly ornamented frames that had been commissioned by Catherine the Great with the plain black and dark brown frames that seventeenth-century paintings originally had. We’ve meanwhile provided new frames for twenty-seven Dutch paintings, and it’s incredible to see what such a frame adds to an Old Master. It was a great honor to have the Hermitage in St. Petersburg devote an exhibition to my frames in late 2011. What made this exhibition so special were the wall texts accompanying the frames, which provided information about their production. For that matter, it’s certainly no coincidence that Irina Sokolova is a member of CODART, because CODART also played a role in consolidating my contacts in the museum world.”

“Yes, because CODART enables me to do targeted networking. I like to attend CODART meetings and events, where I’m also welcomed as a patron, such as the CODARTfocus meeting in Antwerp last October, or the ‘friends afternoon’ organized at the Rembrandthuis in December. I not only see other CODART friends, but also meet kindred spirits, such as curators, with whom I can share my ‘eccentricity.’”

Are we standing beside the production line of a future multinational company?

“I’d very much like to go on expanding and perfecting my collaboration with museums. What I find particularly inspiring is being on the same level with art historians and being able to discuss my obsession with them, and I’m happy that my frames can give an added dimension to their collection. But I don’t care about getting rich and heading a large international company. What really makes me happy is to put my hallmark on a frame that is historically sound and lends luster to a splendid work by an Old Master.”