View on Room XI, with a painting of Ludolf Backhuysen (1630-1708) as centrepiece

For the first time in the history of the Alte Pinakothek, the traditional hanging scheme, developed along chronological and geographical lines, was consciously challenged, resulting in a new reordering of about 200 works. Featuring dialogical juxtapositions and thematically arranged clusters of works, the new display invites visitors to rediscover familiar masterpieces.

Many of the museum’s best-known works, previously shown in separate galleries far apart from each other, are now direct neighbors, despite belonging to different epochs and styles. Their unusual juxtaposition reveals hidden parallels and directs our attention to rarely thematized connections and shared qualities. This opens up new perspectives on the paintings and their creators, on the content and form of the depictions as well as on the contexts in which they were produced. 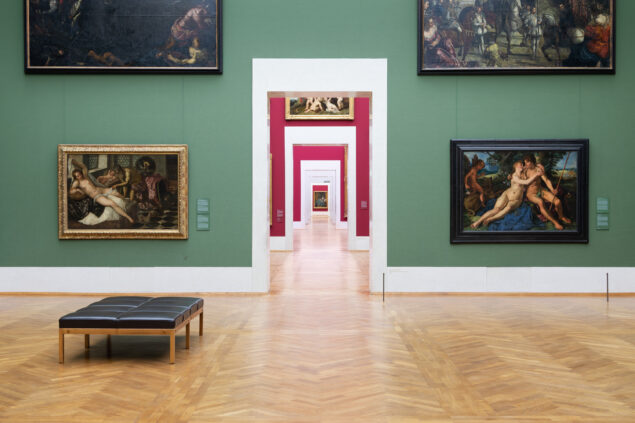 Many of the new compositions give rise to broader thematic groups that not only reflect key genres in painting – history painting, portraiture, landscape, and still life – but also underscore recurring compositional devices and narrative structures and illustrate prominent motifs: for example, the relationship between interior and exterior space, the monumental draped figure, lighting effects, Marian images and scenes from the life of the Virgin, the female nude, the discourse between man and God, or representations of violence and suffering. Occasionally, questions of execution, such as colour or brushwork, also come into focus. These thematic clusters result in some unexpected pairings, for example: Dürer and Botticelli, Pacher and Ghirlandaio, Perugino and Bellini, Grünewald and El Greco, Tintoretto and Goltzius, Titian and Hals, Velazquez and Van Dyck, Murillo and Rembrandt, Koninck and Lorrain, Tiepolo and Boucher. 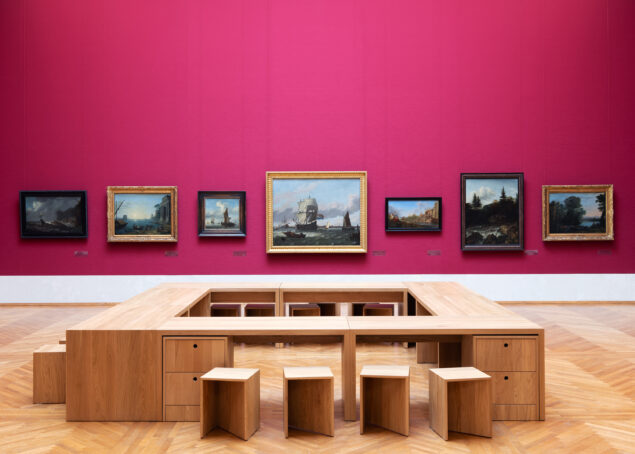 Display in room XI (an art education and study gallery) centered around a marine painting by Ludolf Backhuysen (1630-1708).

The new hang is most notable in two galleries in particular: in what was once the Venetian gallery and in the room previously reserved for Dutch painting. Both now unite artists and styles from various countries and centuries in an extraordinarily dense display that vividly demonstrates how, beyond the established system of so-called schools in European painting, local origin and political borders never stopped artists from communicating with each other through their art.

Despite the many changes, certain ensembles of paintings remain unaffected, however, and are presented in their usual context, for example the Rubens display at the heart of the museum. The north-facing galleries, also currently unaltered, are due to be rehung in the coming months.

The new installation was curated by Bernd Ebert and Andreas Schumacher, with assistance from Elisabeth Hipp and Mirjam Neumeister.