The Rijksmuseum has acquired a rare amber gamebox that was once owned by the Van Oranje-Nassau family. The game box is shaped like a treasure chest and holds four smaller boxes for tokens. It is virtually the only remaining amber object that can be connected with certainty to the House of Orange. It bears the combined family crests of the stadholder Prince William IV and of his wife Anne of Hanover, and was given to them by the Prussian king for their wedding in 1734. The box will be on show in the new Rijksmuseum presentation.

Amber is found on the Baltic coast and was a popular gift for royal weddings in the 17th and 18th centuries. In 1734, prince William IV of Orange-Nassau married the daughter of the British king George II at St James’s Palace in London. It was probably the Prussian king Friedrich Wilhelm I who sent them this costly amber box, used during card games, on the occasion of the royal wedding.

Strikingly, the game box, as well as the four smaller boxes it contains, are all encrusted with the combined coat of arms of William and Anne. When Anne died in 1759, “A large and a smaller amber box, each with four quadrille boxes and their tokens” are mentioned in her inventory. Through inheritance the box disappeared to Germany but with the support of the BankGiro Loterij, de Vereniging Rembrandt, Mondriaan Stichting and VSBfonds, it has again been re-acquired for Holland. The box will be displayed prominently in the 18th century galleries of the new Rijksmuseum.

Femke Diercks, curator of applied arts: "The game box is an excellent example of amber art, but also has some important historical stories to tell. Through the coats of arms, that connect the object directly to the House of Orange, it is a tangible reminder of the once extensive amber collections of the House of Orange and of the popularity of amber as a diplomatic gift." 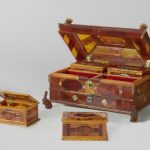