In 2010 the Deposition from the cross, an early work (ca. 1620-23) by Jacob Jordaens (1593-1678), was transferred to KIK-IRPA in Brussels to undergo an in-dept technical examination, followed by an extensive restoration. Now, two years later it is back on display in the Maagdenhuismuseum in Antwerp in its full splendor.

Information from the Maagdenhuismuseum, 30 July 2012

The painting is one of the earliest works by Jordaens and was produced in two phases. The original middle part was painted in 1620-23 and the enlargements on all four sides were added in ca. 1650. In 1679 it was brought to the Maagdenhuis from Jordaens’ home. In 1691 it functioned as an altarpiece in the Maagdenhuismuseum. It remained there ever since.

An X-ray of the canvas and microscopical paint samples show that Jordaens prepared the original canvas with a double ground: a first, beige chalk-based layer, and a second lead-white and charcoal based grey layer. This is a typical technique for Antwerp in the first half of the seventeenth century.

Around 1650 he had the painting enlarged by small strips of canvas along the sides. These enlargements were then prepared with a simpler ground, chalk and earth pigments-based, which occurs more often in paintings of the later period. The enlargement was executed carelessly and the seems between the two phases were already visible originally. This somewhat reckless changes in size occur more often in the workshop of Jordaens.

Through aging of the materials and the accumulation of dirt, the different pieces of canvas have become even more visible. The study of the canvas has also brought forward that the paintlayer had become very fragile and was in urgent need of conservation. An old vertical rip along the left side had been repaired in the past by lining the painting. The enlargements, who are painted much thinner and loose then the first phase of the painting, were heavily overpainted to cover worn areas and damages and to mask the technical and stilistic differences between the two phases. The painting was also covered in an artificial grey patina, probably to dim the intensity of some colors.

The old restaurations and layers of varnish had darkened and were discolored. After consolidation of the paint layer the heavy old restorations were removed to regain the full effect of colors and composition. The grey patina was kept partially to prevent an even clearer difference between the two phases. By removing the overpaintings the painting has regained much of its spatiality and depth.

Research has also showed that Jordaens himself also retouched large parts of his first composition. Regrettably his own, often discolored retouches were interpreted as later restorations and partially removed. After cleaning old damage was restored and a new layer of varnish was applied to the painting. 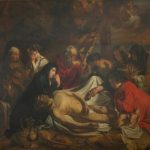 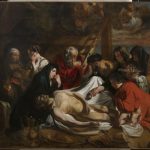