Netherlands Historical Maritime Museum Association celebrates its 100th anniversary in 2016 with the purchase of View of the River IJ with ‘s Lands Zeemagazijn by Reinier Nooms (1623/1624-1664). The painting depicts ‘s Lands Zeemagazijn, the present-day location of Het Scheepvaartmuseum (The National Maritime Museum), as seen from Buitenkant, the present-day Prins Hendrikkade.

Reinier Nooms is one of the more important maritime painters of the seventeenth century. Because of his many sea voyages he was given the nickname Zeeman (‘sailor’ in Dutch), with which he signed this painting. Nooms depicted maritime and nautical details with the eye of an expert, and his work is an important source of information about seventeenth-century Dutch seafaring.

The museum plans to display this masterpiece by Reinier Nooms for the first time this autumn as part of a major exhibition covering the 100-year history of the museum collection. The painting makes a particularly interesting pair together with a recently acquired seventeenth-century model ship.

The Scheepvaartmuseum was able to acquire the work thanks to the support of the Vereniging Rembrandt and its Acquoy-Nairac Fund, the BankGiro Lottery, the Mondriaan Fund, Het Compagnie Fonds and the Vereeniging Nederlandsch Historisch Scheepvaart Museum. 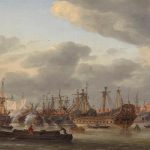 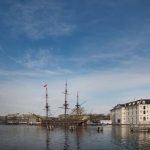