Information from the museum, 22 September 2015

Today Her Majesty Queen Máxima will be present at the opening of the renewed Museum Ons’ Lieve Heer op Solder. This day marks the official completion of the new entrance building and the restoration and restructuring of the 17th-century canal house with its clandestine church in the attic. The new entrance building will be open to museum visitors from Wednesday 23 September.

The new entrance building contains several facilities which the public have come to expect from a modern museum, such as a museum shop and restaurant. A room has also been set aside for future educational programs on themes such as religious diversity and tolerance. The historic house on Oudezijds Voorburgwal has been renovated and restored to its original essence: a 17th-century house where people lived, worked and practiced their faith. In its new layout, the museum focuses on the various people who lived in the house. Throughout the entire restoration and restructuring, the museum remained open to the public. The new entrance building, designed by architect Felix Claus, is linked to the historic house by an underground passage and has expanded the museum to twice its original size.

In connection with the celebratory opening, the museum will be closed to the public on 22 September 2015. 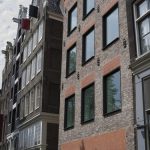 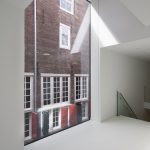