The new Plantin-Moretus Museum, a UNESCO World Heritage Site, opened today. The museum plans to draw visitors into the remarkable story of the pioneering publisher Christophe Plantin and the Moretus family into which he married. With cinematic interventions, soundscapes, and hands-on activities, the house, the publishing business and the family are brought to life more than ever before.

Parts from the press release, 29 September 2016

Christophe Plantin was originally from Saint-Avertin, near Tours in France. The sixteenth-century publisher settled in Antwerp around 1550 and ran his business like a modern CEO. His publishing house, the ‘Officina Plantiniana’, grew into a multinational with branches in Leiden and Paris. With the multilingual bible, the Biblia regia, he was able to convince King Philip II of Spain of the quality of his printing, and was given exclusive rights to export liturgical works to Central and South America. He became the founding father of the Plantin-Moretus publishing dynasty. ‘De Gulden Passer’, the family home and publishing business on Antwerp’s Vrijdagmarkt, remained in the family for nine generations.

Plantin was a trendsetter when it came to design. He created a new market for books with refined engraved copperplate illustrations. The Frenchman introduced a variety of elegant French typefaces to the Southern Netherlands, such as Garamond. Today, this font can be found on every computer. With his childhood friend Peter Paul Rubens, Plantin’s grandson Balthasar developed the lay-out of the Baroque book.

Upstairs, the focus is on the publishing house with which Plantin and his descendants put Antwerp on the map. The main achievements are divided into four themes: language, science, religion, and people and society. Leading authors and scientists found their way to Antwerp’s Vrijdagmarkt, and Plantin was able to spread their ideas throughout the world.

The exhibition layout puts ten major exhibits in the spotlight, real bestsellers that have left their mark on history, such as Ortelius’ maps or Stevin’s mathematical works.

The exhibition design is the work of Studio Caroline Voet and Leen De Brabandere, who have already demonstrated their abilities at Castle d’Ursel in Hingene. Voet-De Brabandere is an agency that is conscious of the need for sustainability and the value of a UNESCO site, and attaches great importance to the authenticity of the historic house. By involving designer Geoffrey Brusato, they have also managed to give a place to the rituals of handling a book in the museum visit. Digital media will be present, but will play a subordinate role: the book is central.

To increase visitors’ comfort, the museum has created more rest areas, improved reception areas, better workshop spaces and a more attractive museum shop with a wider range of products. The museum’s presence on Vrijdagmarkt will be even more prominent thanks to improved illumination and signage.

The depot with the new reading room is the work of noAarchitecten. The building of the depot means that the collection can be packed up and stored away properly to be carefully preserved for future generations.

UNESCO has welcomed this initiative by the city, which allows the collections to be preserved in a responsible manner on location. The organisation also appreciates the fact that the new building is a contemporary functionalist creation which interprets the essence of the traditional architecture without explicitly quoting it.

The collection will also be looked after better in the permanent exhibition. Paper is like textile: it cannot withstand lengthy exposure to light and temperature fluctuations. 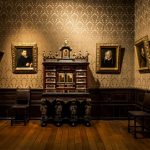 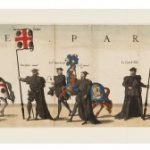