The project to restore Hans Memling’s Christ with Singing and Music-making Angels has finally been completed after sixteen long years. The only way a brown crust of dirt could be removed was with a scalpel and microscope. But the result was definitely worth the wait: at last the original colors and magnificent motifs as Memling had intended are back on the surface. 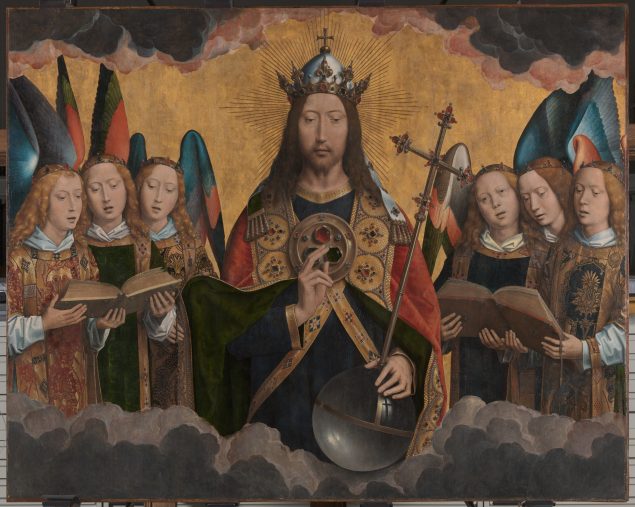 The three monumental paintings depicting Christ with singing and music-making angels are attributed to Hans Memling (ca. 1430-1440 – 1494) and were executed at the end of the fifteenth century. The three panels, which together account for a surface area of 110 880 cm2, are ‘only’ a fragment of what must have been a gigantic altarpiece. It hung in the monastery church of Santa Maria la Real in Nájera in Spain. The three scenes from the Royal Museum of Fine Arts Antwerp (KMSKA) collection probably formed the upper register, with a life-size Assumption of Mary underneath, flanked by saints, apostles and martyrs. In all probability those pieces were lost. Underneath the monumental retable there may also have been a predella or decorated shelf and two reliquaries. The retable was one of the most important commissions Memling ever received. Given its size, assistants would almost certainly have helped execute it.

Over a period of more than 500 years the ravages of time took their toll with the result that the conservation of these paintings was threatened. The layer of paint had started to flake in a number of places and the work was in danger of falling off the wooden support. Blocked back frames restricted the panels’ freedom of movement and this could have caused damage. Aesthetically, too, the condition of the paintings left much to be desired. In 2001 Lizet Klaassen and several colleagues started work on the restoration process. The sixteen years after that brought many changes: the original Memling team thinned out, the museum building closed and the restoration workshop moved to an external depot together with some 5000 paintings, sculptures and works on paper. But the main reason the restoration of the Memling masterpiece took so long had to do with the sheer size of the panels and the complex nature of the treatment. 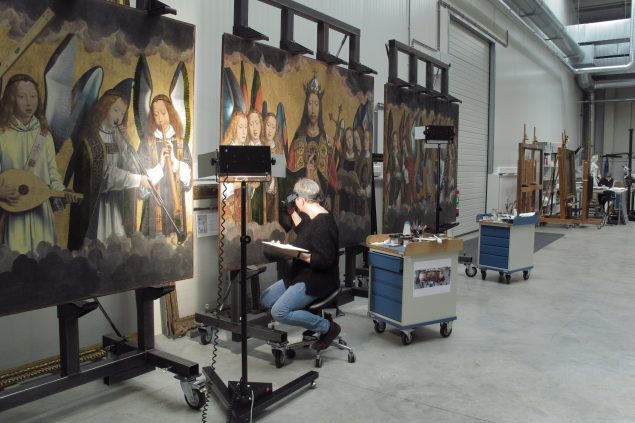 During an extensive preliminary examination, as much information as possible about the condition of the artworks and the painting technique was gleaned with the help of various investigation techniques. The paintings were studied and documented in normal light but also in X-ray, infrared and ultraviolet light. The first step was the fixation of the layer of paint so that the restoration work could continue safely without losing the paint. The next job was to unblock the back frames so as to restore freedom of movement to the panels. The restorers then removed the yellowed layers of varnish and discolored retouches. This was the most precarious and time-consuming stage of the restoration because a thick crust of stubborn dirt proved insoluble with solvents. The restorers could only remove it millimeter by millimeter with a scalpel and under the microscope. Once cleaned, the damage in the original layer of paint was visible. Gaps were filled in and retouched. Last month a new layer of varnish was applied. Interestingly, the gold on the panels was not varnished; tests had shown that the effect was more beautiful without.

The effect of the restoration is spectacular. One of the most satisfying results was the discovery of the original colors under the dirty crusts, and seeing the wonderful motifs resurface as Memling had intended them. Lizet Klaassen, restorer KMSKA: “With every centimeter of dirt you scraped off, you gained a centimeter of color. You start with a brown crust and end up with brocade and magnificent patterns!” An interesting discovery was the preparatory layer or ground, which consists of chalk and gypsum. To the north of the Alps chalk and lime were used, in the south gypsum. The combination of chalk and gypsum is unusual. The polyptych was a Spanish commission so while it is tempting to think that is was made in Spain, Memling could equally well have painted it in Bruges.

An Arttube film about the restoration project has been created; view it here: http://www.arttube.nl/videos/de-memling-restauratie-een-marathon