From the museum press release, 19 February 2009

The Rijksmuseum has acquired 45 drawings from the collection of Prof. J.Q. van Regteren Altena (1899-1980), who was an art history professor and director of the Rijksmuseum’s Print Room. The collection is one of the last significant collections of drawings remaining in the Netherlands. Starting 17 February, the 16 most exquisite drawings and one terracotta sculpture, all of which are highly prized for their art historical and cultural value, will be on public display.

The works include outstanding works from the 16th and 18th centuries, including Boerenkermis (Country Fair) by Karel van Mander, a portrait that Jan Cossiers, an assistant of Rubens, drew of his son Cornelis, as well as a magnificent tree study by Roelant Savery. There is also a study of Roman ruins (ca. 1535) from a sketch book by Maarten van Heemskerck, as well as four landscape drawings of the "Spieringshoek" building, which no longer exists, completed by Cornelis Pronk in the mid-18th century near Schiedam.

Also on display from the Van Regteren Altena collection is a unique statue of a young woman standing, attributed to the English sculptor Nicholas Stone (1586-1647). The artist was a close colleague of Hendrick de Keyser (1565-1621), the official sculptor and architect of the city of Amsterdam. It is one of the earliest known terracotta studies in the Netherlands.

Finally, a study by Jacques de Gheyn (1565-1629) of two female nudes that was recently acquired by the Rijksmuseum will also be shown. Although this masterpiece was not part of Van Regteren Altena’s collection, he probably dreamed of owning it, as his doctoral research, which he defended in 1936, dealt with De Gheyn.

In the 1920s, Van Regteren Altena had already begun collecting drawings from various countries and periods, but preferred Dutch drawings from the late 16th to early 17th centuries. Early on, he developed close ties with the Rijksmuseum and occasionally gave away works from his ever-growing collection. After his death in 1980, Van Regteren Altena bequeathed works to the museum and after his widow passed away, his children also decided to donate drawings to the Rijksmuseum. In making this special donation, they were able to benefit from the Successie betalen met kunst tax scheme to pay inheritance tax using works of art, as part of which heirs are granted remission of inheritance tax levied on the estate up to 120% of the value of objects of artistic or cultural-historical significance. 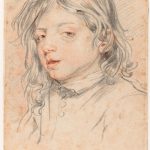