From 4 November 2011 visitors are welcome in the new gallery on the ground floor of the Royal Castle, which was previously taken by the Courtiers’ Lodgings. These rooms now house the works of art given to the Royal Castle by professor Karolina Lanckorońska in 1994. It was her heirloom, earlier owned by Kazimierz Rzewuski. Now the paintings from one of the best private collections in Europe are accessible to the public. After being previously displayed in different rooms of the Castle, they were now given a special arrangement in the newly adapted interiors. Apart from the portraits of the founders and creators of the collection – members of the Rzewuski family – the collection includes two Rembrandt’s paintings (out of three present in Polish collections) – Girl in a picture frame and Scholar at his writing table. Visitors also have a chance to admire art works from the collection of the last king – Stanisław August. There are also examples of painting of the 16th and 17th centuries, amongst other Dutch and Flemish, as well as decorative arts: ceramics, gold, glass, jewellery and miniature painting from the collection of the Royal Castle dating back to the period between the 17th and 19th centuries.

The new gallery at the Royal Castle is located on the groud floor of the Eastern wing, as well as in part of the ground floor of the Southern wing. It has replaced the old room furnishings, which consisted mostly of objects deposited by the National Museum in Warsaw. The old arrangement, dating back to 1970s, has lost its appeal over time, which was proven by visitor numbers decreasing year in and year out. As a result, the rooms on the ground floor were predominantly used for education activities. This has inspired the idea of looking for a new proposition for that part of the Castle interiors, to make them as attractive for visitors as the Royal Apartments on the first floor. Another important factor was the fact that the Castle collection has been growing for the last 30 years and needed more space, as many precious acquisitions were kept in storage.

The old concept of the ground floor rooms was based on historical arrangement, which did not, however, have a substantial basis in the sources or surviving historical material. The new plan was to turn those rooms into a gallery.

The main part of the gallery (by the Riverside) is devoted in full to the collection that professor Karolina Lanckorońska gave to the Royal Castle in 1994. The collection consists of 35 invaluable paintings, amongst them as many as 15 paintings from the Stanisław August’s collection, including two masterpiece by Rembrandt (two out of three in Polish museums) – Girl in a picture frame and Scholar at his writing table, which are the focal points of the gallery. The second part of the gallery is composed of the best and the most interesting paintings from the 16th and 17th centuries (55 of them), which were either not exhibited before or only displayed as part of the interior decoration, usually difficult for the visitors to appreciate. There are also examples of decorative arts (circa 150 objects), furniture and sculpture (over 50 objects).

The new gallery is accompanied by several rooms that retained the character given to them at the turn of 1970s and 1980s. These are the Former Deputies’ Chamber, the Bedchamber and the Closet of the Riverside. This will allow for some of the museum lessons to continue.

Other Dutch or Flemish works of art in the new gallery are by Corneille de Lyon, Ludolf Backhuysen, studio of Joos von Cleve, Cornelius Norbertus Gysbrechts. 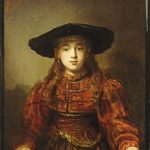