Today some of the results from a forthcoming publication by the Royal Institute for Cultural Heritage (KIK/IRPA) in Brussels by researchers Christina Currie en Dominique Allart are presented. One of the most striking findings in the book The Brueg(H)el phenomenon is that one of the top pieces in the Royal Museums of Fine Arts in Brussels, the Landscape with the fall of Icarus, is not a Bruegel. The attribution of the work had been subject of debate for a long time, but the research presented today shows that the remains of the original canvas dates from 1600. Bruegel died in 1569. It is suspected that the work in Brussels is a copy after a now lost original by the master.

Twenty years of scientific analysis dedicated to the painted works of Pieter Bruegel the Elder and the copies by his son Pieter Brueghel the Younger have come to fruition in this volume, the culmination of a long-term research program carried out by the Royal Institute for Cultural Heritage in partnership with the University of Liège; it has benefited from the generous collaboration of 19 Belgian and foreign museums and numerous private collections.

CODART-members will get the chance to discuss the painting at the upcoming CODART VIJFTIEN congress in Brussels from 18-20 March 2012. Registration starts tomorrow. 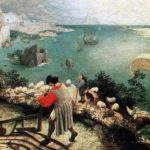