For the first time in the 10-year history of the Max Stern Art Restitution Project, a German museum has returned a work to the estate of the late German-Canadian art dealer of Jewish heritage. Concordia, acting on behalf of the executors of the Estate of Max Stern and its three university beneficiaries (Concordia and McGill Universities in Montreal and Hebrew University in Jerusalem) announces the restitution of an early Northern Renaissance painting belonging to Stern.
At a ceremony held at the Canadian Embassy in Berlin, in the presence of representatives of the Government of Canada, the State of Baden-Württemberg and the Staatsgalerie Stuttgart, a painting of the Virgin and Child attributed to the Master of Flémalle (1375-1444), was received by Concordia University’s Clarence Epstein, who leads the restitution project.

Credit is due to the researchers at the Staatsgalerie, along with the dedicated team at the Holocaust Claims Processing Office (HCPO) of the New York State Department of Financial Services, which has taken an active role in pursuing Stern claims since the inception of the project. “We are grateful for the ongoing support of the HCPO, as well as international auction houses and agencies, such as Interpol and the United States Department of Homeland Security,” says Concordia President Alan Shepard. “With more than 400 paintings yet to be recovered, the most immediate challenge lies in encouraging a number of other museums currently in possession of Stern paintings to follow the lead of the Staatsgalerie.”

The Stuttgart recovery comes on the 100th anniversary of the founding of the Galerie Stern in Düsseldorf by Max Stern’s father, Julius. It was once one of the most important commercial galleries in the city, having developed relations with museums across Germany. By the middle of the 1930s, with the rise of Nazism and the expulsion of Jewish members from the Reich Chamber of Fine Arts – a division of Goebbels’ Reich Culture Chamber – the gallery’s fate was imminent. The Virgin and Child painting was one of several works sold to secure an exit permit for Max Stern’s mother, Selma.

During World War II, Max Stern was interned in England and Canada before settling in Montreal in 1941. In the following decade, he began his own art restitution efforts. Canadian government officials provided him with letters of introduction to European diplomats, while members of the Canadian military stationed in Germany helped recover two of his paintings. Stern was to become one of the most important art dealers in Canadian history, building bridges between artists and collectors in Europe and Canada.

“The confiscation and forced sale of cultural property that occurred on an unprecedented scale during World War II was not only a theft, but the undermining of a cultural identity,” says Citizenship, Immigration and Multiculturalism Minister Jason Kenney, who attended the restitution ceremony. “The Government of Canada is committed to raising awareness of the Holocaust and to continue its fight against anti-Semitism.”

The official return of the Stuttgart painting was part of a larger event in which the Chair of the International Holocaust Remembrance Alliance (IHRA) was passed from Belgium to Canada for the next year. The IHRA is an intergovernmental organization that positions the support of political and social leaders behind the need for Holocaust education, remembrance and research.

Photos of the reclaimed artworks and looted works still claimed by the Max Stern Art Restitution Project can be found on Pinterest. 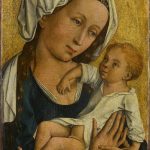