The Mauritshuis’s successful touring exhibition, which includes the Girl with the Pearl Earring, will be extended by 3.5 months and will conclude its two-year run in Italy. A selection of forty important highlights will be on view from 8 February to 25 May 2014 in the Palazzo Fava in Bologna. The directors of the Mauritshuis signed an agreement this morning with exhibition organisers Linea d’ombra.

Emilie Gordenker, Director of the Mauritshuis: ‘We have always wanted to show a great selection of paintings in Europe, as well as in Japan and the United States. The Palazzo Fava in Bologna is a superb, historic location, and will be the perfect ending for the Mauritshuis’s world tour.’

A selection of major works have been on tour to Japan and the United States during the renovation and expansion of the Mauritshuis. The paintings were on view in the Tokyo Metropolitan Museum and the Kobe City Art Museum in Japan, where they attracted almost 1.2 million visitors.

An exhibition of thirty paintings from the Mauritshuis, entitled Girl with a Pearl Earring: Dutch Paintings from the Mauritshuis, is currently on view in the deYoung Museum, of the Fine Arts Museums of San Francisco. These works will travel on to the High Museum of Art in Atlanta. The US tour will end with a smaller selection of paintings at The Frick Collection in New York. The Palazzo Fava in Bologna has now been added to this impressive list of museums.

The income from the travelling exhibition will be used toward the expansion and renovation of the Mauritshuis. The museum is entirely responsible for the management and financing of this major building project. The renewed Mauritshuis will reopen mid-2014. The permanent collection will then return to The Hague and will be on view its former location, the city palace, which will by then have been completely renovated. 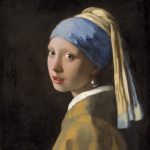