A detailed still life with flowers and fruit by Cornelis de Heem (1631–1695) has returned to its historical home after sixty years. The picture was purchased by the builder of Dyrham, William Blathwayt, in the 1690s. It stayed in the house until it was sold at auction in 1956.

The painting, A Still Life of Flowers and Fruit arranged on a Stone Plinth in a Garden, dates from the mid-1680s when the artist was living in The Hague. It depicts a wide variety of flowers, such as viburnum, roses, lilies, carnations and peonies, foods such as peapods and physalis, and fruit such as peaches showing the first blooms of mould, and a large melon cut open to reveal the ripe flesh.

The vivid use of color and display demonstrates the influence of Cornelis de Heem’s father Jan Davidszoon. The wooded garden setting suggests the influence of Abraham Mignon (1640-79), another of Jan Davidszoon’s pupils, who specialized in the forest floor sub-genre of still life. Other proponents include Melchior d’Hondecoeter (1636-95), of which Dyrham has six works in its collection.

Rupert Goulding, National Trust curator, said: “It is always exciting when an item from an original collection can come back to the place for which it was first acquired and we are indebted to those organizations and individuals whose generous donations have enabled us to bring the de Heem home to Dyrham.”

The painting has been bought by the National Trust, through dealer Johnny van Haeften, with funds from the National Heritage Memorial Fund, the Mr and Mrs Kenneth Levy bequest, the Art Fund, a fund set up by the late Hon. Simon Sainsbury, the Royal Oak Foundation’s Ervin-DesChamps Fund, and a private donation. 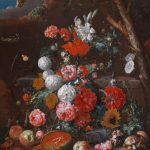 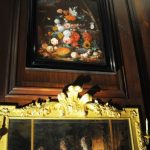