The Scottish National Portrait Gallery has recently acquired its first portrait by the important 17th-century painter Cornelius Johnson. Johnson, who was born in London to a Flemish/German migrant family, painted many celebrated sitters, including King Charles I, who made him his official painter in 1632. In 1635, Thomas Bruce, Lord Elgin, commissioned a portrait of his 7-year-old son Robert, which is now on display. Johnson worked on every scale – from the tiny miniature to the great full-length – to produce delicate, sympathetic portraits which, like young Robert’s, often emphasised his sitters’ luxurious clothes.

The museum celebrates the latest acquisition with a talk by Karen Hearn, Historian of British Art and Culture c.1500-c.1710 at University College London. It will take place Tuesday 24 June 12.45-1.30pm in the Hawthornden Lecture Theatre in the Scottish National Gallery. 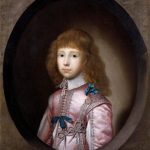