Yesterday the sad news reached us that the eminent art historian Seymour Slive has passed away last Saturday, 14 June at the age of 93. He will be remembered as one of the great connoisseurs of Dutch Art of the past century. We express our condolences to those close to him.

Slive was born in 1920 in Chicago. He attended the University of Chicago and also received his PhD from that university, with his dissertation Rembrandt and his critics 1630-1730 (1953). In 1954 he was appointed at Harvard University, ultimately receiving the position of Professor of fine arts in 1961. In those years he also compiled, together with Jakob Rosenberg and E.H. ter Kuile, the  Penguin volume Dutch art and architecture 1600 to 1800 (1966). In 1995 a revised re-issue followed. From 1975 until 1991 he was director of the Fogg Art Museum. 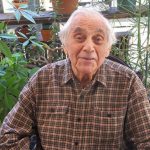