The Portugese Synagogue in Amsterdam will be officially reopened today in the presence of Queen Beatrix. The “Esnoga”, dating from 1675, has been extensively restored in the past two years. The synagogue is still in use and its interior is still as it was in 1675.

Restoration became a necessity when the foundations appeared to be in such a bad state that the annexes around the synagogue became endangered. The restoration also gave the opportunity to strengthen the public function of the synagogue.

Public access to the collections has been provided by a new staircase leading from the courtyard to additional public areas in the annexes. The original shallow cellars in the annexes have been deepened to allow for normal working height. This has resulted in new public spaces: the treasure chambers. Here, visitors may roam the hallways and take a look inside the repositories of the ritual objects. Rows of historical textiles, the finest silver and gold specimens, prints and manuscripts are made visible through glass walls.

Additionally, in the near future, it will be possible to view the rare manuscripts in the Ets Haim-Livraria Montezinos-library. 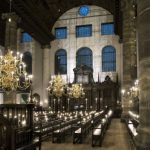 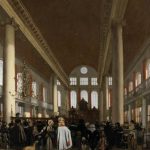