The association of Flemish art museums, the Flemish Art Collection has launched a website dedicated to the Flemish Primitives: www.vlaamseprimitieven.eu. the website is aimed at both the interested general public and the specialized art historian. Earlier this year a similar website was dedicated to James Ensor.

Painting of the 15th and early 16th Century in the Southern Low Countries is a brilliant high point in the history of Art. These painters are generally referred to as the ‘Flemish primitives’. It is an artistic flourishing period that is distinguished by a highly-permeating refinement of oil painting and by an assiduousness to reproduce the visible world in as detailed manner as possible. This realism is also applied to the religious imagery or iconography. Moreover, the Flemish primitives emphasize a previously unseen religious expressivity that ushers in a new tradition in painting. The commissions not only came from the various courts and religious institutions, but also from the cities and their citizenry. For the first time, the painter received a very prominent position in the society. Through contacts amongst Flanders, Northern Italy and other regions on the continent, this typical Flemish art of painting influenced all of Europe. 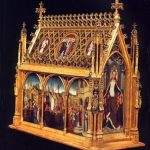