City walking tour: The art of Amsterdam in its historical and topographical context

The production of art in Amsterdam is closely connected to the structure and growth of the city through the ages. In this walking tour Norbert Middelkoop (Curator of paintings, prints and drawings at the Amsterdam Museum) and Tom van der Molen (Webmaster of CODART and assistant curator at the Amsterdam Museum) will give a broad outline of why the city center of Amsterdam looks the way it does. While walking, participants will be lead along some of the canal houses and other places where the paintings were originally hung.

The tour will start from the Cromhouthuizen (also known as the Bijbels Museum, Herengracht 368), the impressive classicistic canal houses built by Philips Vingboons for wealthy merchant Jacob Cromhout on Herengracht. Last year, its well-preserved interior has been enriched by/with many artworks. During our stroll through the city center we will also visit the still lavishly decorated governors’ room of the former City Orphanage (now part of the Amsterdam Museum). On Nieuwmarkt, in the very old part of town, the St. Anthoniswaag or Weighing House used to house the Theatrum Anatomicum, as well as the assembly rooms of the Surgeons’, Masons’ and Painters’ Guilds. Further on, at the former Oudezijds Huiszittenhuis (a charity institution active from 1655 to 1808), we’ll admire some interesting paintings in situ in the old Reception Room, before we end the tour at Museum van Loon to take part in the opening reception. 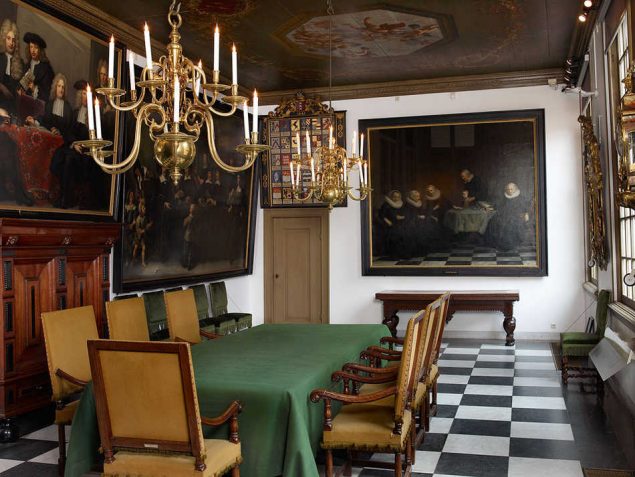