Manfred Sellink studied history and art history at Utrecht University. After graduating he obtained a research and teaching position at the same university. In 1997 he received his Ph.D. for his research on the Antwerp and Haarlem engraver and print publisher Philips Galle (1537-1612). Already while studying Sellink developed ties with the museum world interning with Jan Piet Filedt Kok at the Rijksprentenkabinet, Amsterdam. In 1990 he shifted allegiance from academia to the museum world when he became curator and later senior curator of the department of prints and drawings at the Museum Boijmans Van Beuningen in Rotterdam. During his time at the Boijmans Sellink became increasingly interested in the organizational side of the museum. Instead of just complaining about the strategic “errors” directors were making, he was willing to assume the responsibility himself and “get his hands dirty.” This opportunity came when he was appointed director of the Musea Brugge in 2001.

You are an acclaimed expert on the 16th-century Antwerp print world and Pieter Bruegel the Elder. As the director of a large organization, is it difficult to find the time for your own research?

I conducted my most important research while at university, for the sake of my Ph.D. thesis, and during my early years at the Boijmans. I still publish regularly, but most of what I write is based on the research from this period. While I keep up with new developments in the field, I can no longer undertake fundamental research. This is inevitable; I suppose the same applies to university professors who have to spend a lot of time on administrative and organizational duties. It is very important for me to keep publishing, though. Not only does it gives me great pleasure, I also feel I can still contribute to the scholarly debate, even if I have to work on it at night and in the weekend. I am not saying that every director should publish, but for me art historical research is the foundation of so much that happens in the museum. It is an added value that I can participate in the scholarly process within the institution. While I no longer do the actual handwork, I can certainly give constructive input and function as a critical touchstone for my curators. Furthermore, I have an extensive network in the museum world as well as the academic community that I can call upon to further our research.

The Musea Brugge are a conglomerate of 16 museums with very different characters. How do you divide your attention between them?

By not doing it all myself. In my opinion, the significance of a director is highly overrated. Of course, to the outside world I am the face of the organization. Together with my senior staff I establish the long-term strategic goals for the entire organization and make sure that projects developed by the different institutions agree with this vision. However, the day-to-day business and carrying out of the actual projects are left to the managers and curators of the individual institutions and an excellent staff of about 200 employees. I am not, nor would ever want to be, the type of director that micromanages. The museum does not have just one, but many very capable faces.

You just held a CODARTfocus conference in Bruges focusing on a discussion of the plans for the future permanent exhibition of the St. Janshospitaal. Part of the criticism of the current installation is that the combination of the building, the historical objects and the Memling masterpieces does not result in a harmonious entity, but rather one in which these three aspect conflict with one another.

In my opinion they do not conflict at all. In fact, the combination of the architectural, historical and art historical context is what makes the St. Janshospitaal unique. It is not a museum in the strict sense of the word, and should perhaps not be treated as such. It is rather a lieu de memoire where the material history of the building and collections, and the immaterial history of over 800 years of care for body and soul together tell a unique story. The challenge for us is to transfer this layered history into an exhibition showing how the paintings and objects are indissolubly linked to the stories and the building.

Most of the visitors to the St. Janshospitaal come to see Memling’s masterpieces. The goal of the new installation is to help them understand the whole story. The current display, which reflects museum philosophy of the late 1990s, does not provide that story in keeping with today’s standards. By the same token, our installation will bear the mark of our time.

For the past two years a think tank with experts from different fields – not only art historians, but historians and architectural engineers as well – has analyzed the strengths and weaknesses of the St. Janshospitaal and generated a new concept. At this stage discussions, for instance with our CODART colleagues, can only strengthen this concept.

These discussions help us create public support for our plans and also identify where we might meet resistance. Taking this process beyond the walls of the museum was a natural step. Without outside voices, there is a real risk of developing tunnel vision. The think tank, as well as the meetings with other stakeholders, enables us to keep the discussions open. Ultimately however, the museum will make the decisions about the new installation. 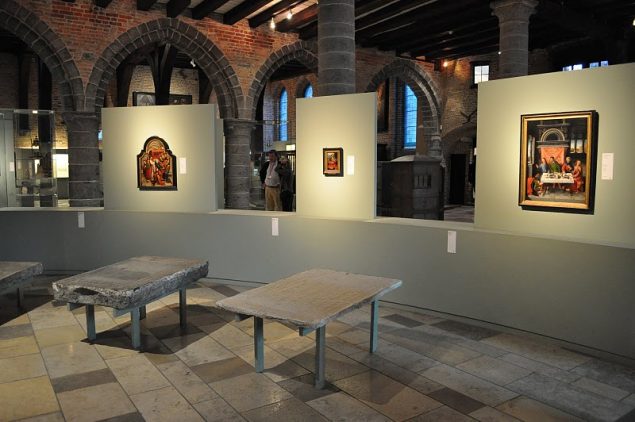 On October 29 the Van Eyck to Dürer exhibition opened in the Groeningemuseum. It gives an overview of 15th and 16th-century Central European painting and its relations to the Early Netherlandish School. The exhibition is highly ambitious in its dual theme and scale. Do you think there is a risk of it being too complex for the general public?

There seems to be a tendency in the museum world to underestimate the public! Besides, the Groeningemuseum has a long-standing tradition of mounting “blockbuster” shows addressing complex subjects that goes all the way back to the exhibition Les Primitifs Flamands in 1902. In fact, I think it is a museum’s duty to recount these complex histories, to take the road less traveled and not hide behind the more often told tales and the names of artists sure to attract crowds. With this exhibition we are telling a completely new story. The art of Central Europe in this period and in this broad international context is truly terra incognita. As far as we know no extensive exhibition has ever been devoted to this subject.

Furthermore, there is no such thing as the public. Some visitors will be drawn to the show by names such as Van Eyck, Rogier and Schongauer. While they might not necessarily absorb all of the layers of the exhibition they will appreciate the main ideas. Others will become familiar with the subject by means of the audio guides or smaller publications. Because of the theme’s complexity we invested heavily in education and marketing and communication. Many visitors also come to see a show like this more than once.

The “blockbuster” nature of these shows is never a goal in itself. Any project we undertake, from the biggest to the smallest exhibition, is content-driven. However, there is nothing wrong with attracting a large public, even finding new audiences, and (although it may sound old-fashioned) educating visitors. When organizing an exhibition this expensive and labor-intensive, flying in paintings from all over the world, we have to make sure it is seen and appreciated by as many people as possible! The scale of the exhibition (12 galleries and over 300 works of art) is also crucial to the story we are telling. Displaying fewer objects would have diminished the subtlety of the overview we are trying to give of the Central European schools. For other types of shows, such as monographic exhibitions, “less is more” can be a blessing, but a concept like the one under discussion simply cannot be related in 130 objects.

Of course, there is a catch. To mount these major exhibitions, the Groeningemuseum has to entirely dismantle its permanent collection, which often elicits disgruntled reactions from tourists; and they are absolutely right. The museum is working on finding exhibition space, but this is no easy task in Bruges’ historic center.

In the CODART Courant Summer 2009 (no. 18) issue you stated that the Musea Brugge was not hit nearly as hard by the economic crisis as other institutions. What is the situation six months later?

As I explained in that column, in Bruges neither tourism in general nor the museums in particular have really suffered from the crisis. In fact, our visitor numbers are up. Of course, it has been harder to find third party sponsoring. Before the crisis, banks were our largest sponsors. This has changed, obviously. However, our own revenues and our budget from the city have remained unaltered.

It is difficult to speak about the financial positions of museums in general terms. The situation is different in every country, city, and museum. I am very glad we are still a municipal organization. I have watched the development of many museums (in Holland and elsewhere) toward privatization with some trepidation. In times of economic prosperity, when there are sufficient resources overall, privatization can provide additional funds. However, when the conjuncture fails, the extra elbowroom is lost completely, often with unfortunate consequences for the collections and staff.

During the height of this privatization hausse in the 1990s, museums as well as governments only saw the benefits of greater (financial and operational) independence, and ignored the downsides. Even privatized museums still get most of their resources from national or local governments, but they are much less visible to the taxpayer thus reducing the political sense of responsibility and public support. One of the benefits of remaining a municipal body is that the organization remains part of the public debate, and thus public awareness. This fact has been largely overlooked in the past 15 years or so by museums and governments eager to privatize. There are detriments as well; the bureaucracy can be a challenge, and there are more restrictions in attracting sponsoring. Still, I think I am able to run the Musea Brugge in a very business-like way. Here in Bruges neither the museum nor the municipality feel any need for privatization. There is a consensus that the museums – which are at the very heart of the city’s identity and crucial for its economy – belong to the public domain.