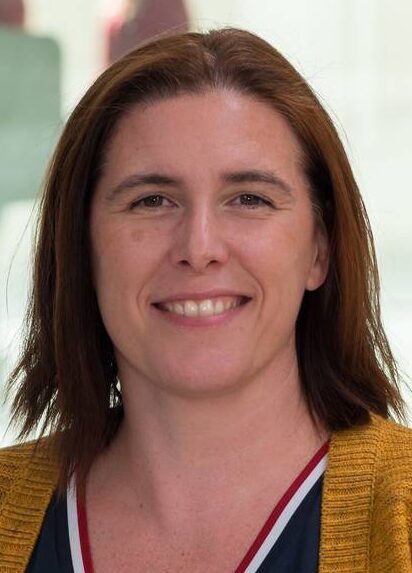 Curator of the exhibition
Marjan Debaene studied Art History and Cultural Studies at the Catholic University of Leuven. She is currently Head of Old Masters a.i. at M Leuven. She specializes in late gothic sculpture from Brabant. She published the first collection catalogue of M’s sculpture’s department and curated several exhibitions for the museum including Sculptures from Bruges (2015-2016), Crossing Borders: Medieval Sculpture from the Low Countries (2017-2018), Bormand and Sons. The Finest-Image Carver (2018) and now Alabaster (2022) in collaboration with Musée du Louvre. She wrote and coordinated various publications  about medieval sculpture and in 2014 became the coordinator of ARDS, the platform for medieval sculpture. In her own doctoral research she takes a closer look at sculpture from Leuven around 1500. 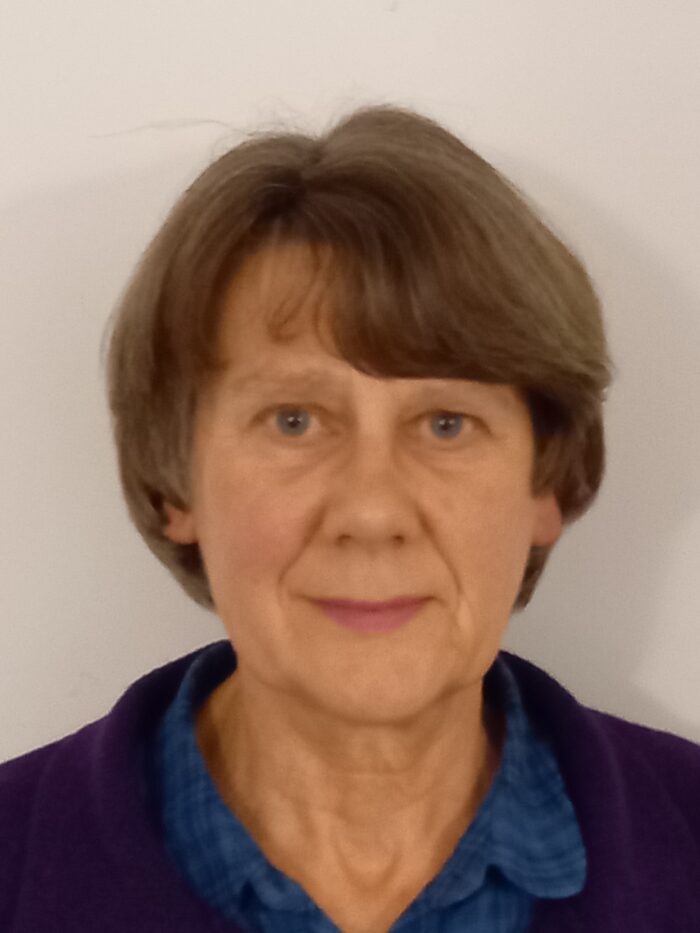 Speaker
Dr. Kim Woods is a specialist in northern European late Gothic sculpture (ca. 1330-ca. 1530), materials of sculpture and cultural exchange. Alongside many research articles she has authored Imported Images (Shaun Tyas, 2007) and Cut in Alabaster, a material of sculpture and its European traditions 1330-1530 (Harvey Miller, 2017). She is now writing Speaking Sculptures in Late Medieval Europe: A Silent Rhetoric, to be published by Lund Humphries as part of the Northern Lights Series edited by Walter Melion. Until her early retirement in 2018, she was a senior lecturer in Art History at the Open University and is now an Honorary Associate.

Lecture abstract: Perspectives on late Medieval and Renaissance Alabaster Sculpture in 2022
This lecture aims to revisit some of the ideas and issues explored in Cut in Alabaster in the light of the Leuven alabaster exhibition, the accompanying conference and recent scholarship. Significant new findings on alabaster provenance have shaken assumptions on the location of workshops and resolved some long-standing debates about materials. Focus on art in private collections and elsewhere in the field remind us that sculpture in museums is just a fraction of surviving work in alabaster and that what survives is just a fraction of what once existed. Pressing questions are still to be addressed around the operation of markets and mechanisms of sale; trade routes and the export of works in alabaster; and the values, traditions and dynasties governing alabaster sculpture. 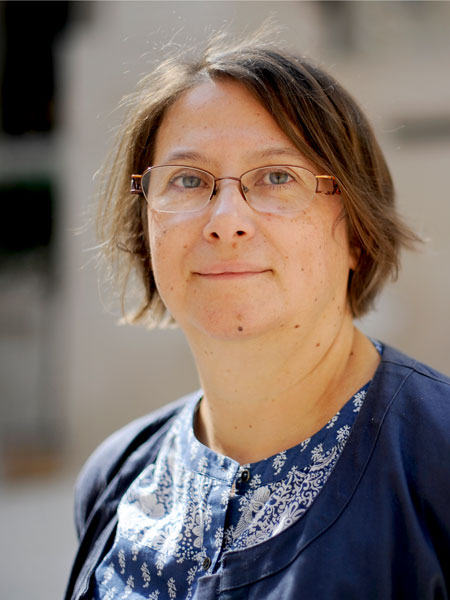 Curator of the exhibition and speaker
Sophie Jugie was trained at the École Nationale des Chartes, the École du Louvre and the Institut National du Patrimoine. She served as curator at the Musée national de la Renaissance in Écouen in 1988-89, then at the Musée des Beaux-Arts in Dijon in 1992 before becoming the director of this museum in 2004. In 2014 she was appointed director of the Sculpture Department of the Musée du Louvre.

At the Louvre, she is responsible for sculpture from France and Northern Europe of the 15th-16th centuries, with a special focus on works from 15th-century France. For the Louvre, she heads a research program on alabaster in France from the fourteenth to sixteenth centuries. In collaboration with M Leuven, she prepared a colloquium in January 2022 and an exhibition for October 2022, which will present the latest research findings on this material in various European countries.

Lecture abstract: After the Turmoil of the Revolution: in Search of the Alabaster Statues of the Cathedral of Cambrai
Cambrai, the seat of a major bishopric, suffered some of the most savage destruction of the French Revolution. Cambrai was the centre of an ecclesiastical principality that was dependent on the Holy Roman Empire until its annexation by France in 1678. Nothing remains today of the cathedral, a remarkable building from the twelfth and thirteenth centuries. Very few of its rich sculpted decorations have survived and most of its historical documentation has been lost. The 24 alabaster statues that may have originated from the cathedral – today scattered among institutions in Cambrai and Paris – have never been the subject of a comprehensive piece of research. Made of English alabaster, they derive from different monuments, between the late fifteenth and mid-seventeenth centuries. It is therefore useful to reread the publications dedicated to them with a critical eye. This may help to clarify the routes they followed and to get a better idea of the artistic context of the Low Countries to which they belong. 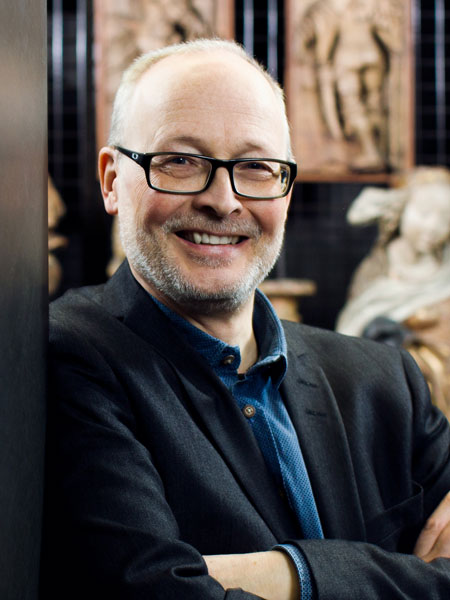 Speaker
Dr. Stefan Roller is the Head of the Department of Medieval Sculpture at the Liebieghaus Skulpturensammlung in Frankfurt. In 1994 he defended his dissertation “Nuremberg: Sculpture of the Late Gothic Period. On the Art of the Imperial City in the Second Half of the Fifteenth Century” at Berlin University of Technology. From 2000 to 2006 he worked as Curator of Ancient Art at the Ulm Museum. In September 2006 he was appointed to his current position at the Liebieghaus, where he has been responsible for multiple exhibitions, the most recent of which include Niclaus Gerhaert. The Medieval Sculptor (2011—2012) and Mission Rimini: Material, History Conservation. The Rimini Altarpiece (2021—2022).

Lecture abstract: The Rimini Altarpiece
In 1913, the director of Frankfurt’s municipal sculpture gallery, today’s Liebieghaus Skulpturensammlung, made a spectacular purchase, the so-called Rimini Altarpiece. This ensemble of small-scale alabaster sculptures, named after the last place where it had been installed – the sanctuary of Santa Maria delle Grazie in Rimini-Covigano – displays the twelve apostles, standing, and a crowd on Mount Calvary. Given its size as well as its artistic quality and craftsmanship, it soon became one of the most popular works of medieval alabaster. Indeed, it would become one of the most famous sculptural objects of the period around 1430. It soon attracted scholarly attention and provided the definitive frame of reference for numerous alabaster works.

The four-year conservation of the altarpiece, completed in 2021, included a thorough technological examination of the sculptures. This process brought to light numerous new and more far-reaching findings, which in turn prompted new art-historical research. While some existing theories were corroborated, the research also generated new questions. 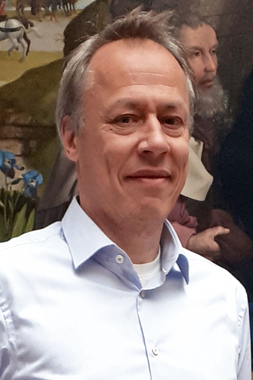 Discussion moderator
Dr. Stephan Kemperdick studied fine arts at the Kunstakademie Düsseldorf 1983-87 and art history at the Free University Berlin. He graduated in 1992, and obtained his Ph.D. in 1996. He was assistant curator at the Städel Museum in Frankfurt and researcher at the Gemäldegalerie Berlin. In 2005 he became curator of old masters at the Kunstmuseum Basel and since 2008 he is curator of early Netherlandish and early German paintings at the Gemäldegalerie in Berlin.