The church tour on Wednesday afternoon will take us to three different churches in Mechelen. Valérie Herremans, Curator of Sculpture at the Koninklijk Museum voor Schone Kunsten in Antwerp, and Bart Stroobants, Curator at Museum Hof van Busleyden, will be your guides.

The first stop on the program is the Sint-Janskerk (St John’s Church). The foundation for this church was laid in the thirteenth century when it started as a chapel dedicated to Saint John the Baptist. One of the highlights of the Sint-Janskerk is Peter Paul Rubens’s Adoration of the Magi triptych from 1616-1617, commissioned by the church. In the eighteenth century, the triptych was placed in the altarpiece we see today, made by the Mechelen sculptor Pieter Valckx after a design by his teacher Theodoor Verhaegen. The pulpit and the two churchwardens’ benches are by Theodoor Verhaegen himself. In 2008, two fourteenth-century wall paintings of Saint Christopher and Saint George were discovered behind the organ case.
More information >>

We walk south and cross the river Dyle towards the second destination: the Onze-Lieve-Vrouw-over-de-Dijlekerk (Church of Our Lady-across-the-Dyle). Although the oldest mention of this church dates back as far as 1236, the year in which the parish was established, nothing is left of the first building. The current Gothic church was built during the fourteenth, fifteenth and sixteenth centuries. Also in this church we can admire an altarpiece by Peter Paul Rubens in situ, namely The Miraculous Draught of Fishes from 1618-1619. In addition, the church holds a baroque high altar with The Last Supper (1690) by Jan Erasmus Quellinus, a sixteenth-century mural with the parable of the prodigal son and a pulpit made by the Antwerp sculptor Willem Ignatius Kerricx in 1718.
More information >>

The last stop of this excursion is the Onze-Lieve-Vrouw-van-Hanswijk basilica (Church of Our Lady of Hanswijk), one of the first domed churches in the Low Countries. The baroque church was designed entirely by the Mechelen sculptor and architect Lucas Faydherbe and built between 1663 and 1681. Under the dome we find two large reliefs made by him, as well as two of the four busts of the church fathers, Ambrose and Augustine. The other two, Gregory and Jerome, are the work of sculptor Jan-Frans Boeckstuyns, also from Mechelen. Unique to the church is the imposing pulpit from 1746, executed by Theodoor Verhaegen.
More information >>

The second excursion on Wednesday afternoon is a visit to the De Wit Royal Manufacturers, the world-renown fabricator and conservator of tapestries and textile. The family company was founded in 1889 and is housed in the late fifteenth-century abbey of Tongerlo. During the excursion we take a look behind the scenes and visit the restoration studio, where we will be given a demonstration of the weaving process and we will learn more about the restoring of tapestries. Besides restoring tapestries, De Wit Royal Manufacturers also acquires them. The remarkable private collection will also be part of the tour that we will take this afternoon.
More information >> 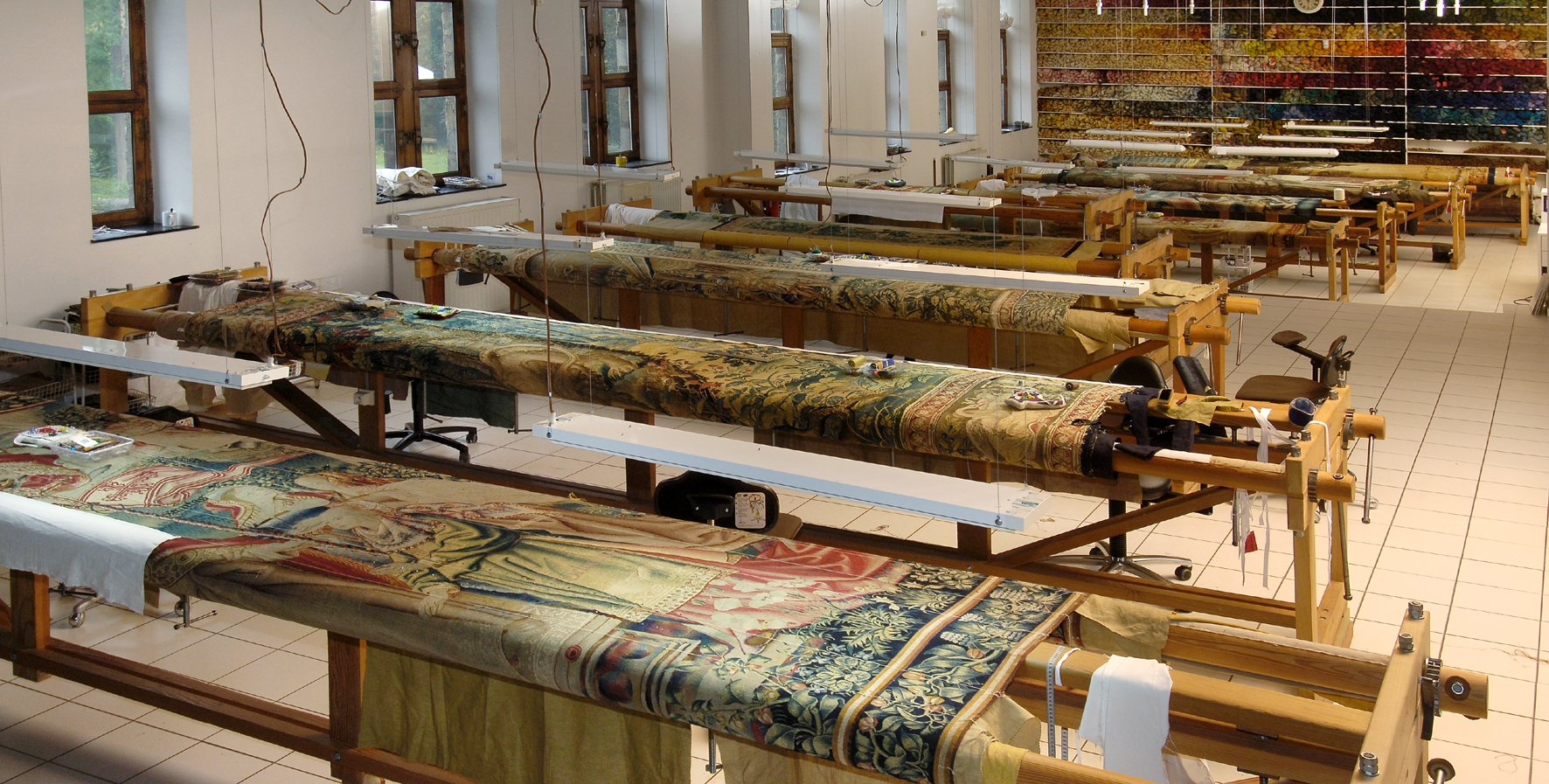 The architectural city walking tour will take you back in time, to the late fifteenth and sixteenth century, when Mechelen functioned as the capital of the Habsburg-Burgundian Netherlands. The establishment of the Parliament of Mechelen, later Great Council and presence of the court of Margareth of Austria, not only attracted artists and noblemen but caused an extensive ‘building mania’ within the city. Because ‘to be noble was to live noble’.

Helena ten Berge, historian with a master in conservation of Monuments and Sites, will walk you through narrow streets, over former rivers, through the botanical garden and along the river Dyle on a 4 km walking tour. We might even climb a staircase tower with views over the city. We will discover and visit several known and less-known, monumental or rather hidden city palaces and early Renaissance houses. Including the garden of the residence of Margaret of Austria (Hof van Savoye) and the former residences of the lords of Nassau (Hof van Nassau) and de Lalaing (Hof van Hoogstraten).