It is with great sadness that we announce the passing away of Willem Baron van Dedem. Willem van Dedem (1929 – 2015) was a passionate and successful collector of art. At the age of 35 he started an art collection that has been recognized as the most important collection of Dutch and Flemish seventeenth-century cabinet-sized paintings in the United Kingdom.

Well known among art dealers and collectors, Van Dedem was a fitting President of the Board of Trustees of TEFAF, a position he held since 1997. Together with his wife Ronny, he also made substantial donations of Dutch and Flemish paintings to renowned museums such as the National Gallery in London, the Rijksmuseum and the Mauritshuis.

Last January, during CODART’s congress in London, Willem van Dedem kindly invited a small group of CODART members to his home near London for an introduction to his outstanding collection of Old Masters. Two months later, during CODART’s Patrons Salon at TEFAF, he generously shared his knowledge with Patrons of CODART while lecturing on the challenges of lending to a museum as a private collector.

Our deepest condolences go out to his wife Ronny, his children and grandchildren. 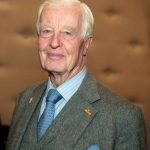