Information from the Centrum, 10 November 2010

The Centrum voor de Vlaamse Kunst van de 16de en de 17de eeuw and the Rubenianum are proud to announce the publication of a new volume in the Corpus Rubenianum Ludwig Burchard series, written by Jeremy Wood, a leading expert on Rubens’s drawings. The presentation of XXVI (2), part 2: Copies and Adaptations from Renaissance and Later Artists: Italian Artists. II. Titian and North Italian Artists will take place at the Kolveniershof (Rubenianum) in Antwerp on 1 December 2010. Part 2 highlights Rubens’s creative copies and interpretations of works by Titian and other North Italian artists such as Veronese, Correggio and Tintoretto. CODART members are kindly invited to this event (see invitation).

The extensive volume on Rubens’s copies and adaptations from Italian artists is divided into three parts: I. Raphael and his School; II. Titian and North Italian Artists; and III. Artists working in Central Italy and France, containing approximately 300 entries in total. The complete volume will thus focus on Rubens’s extensive study of Renaissance art of the sixteenth century. This lasted throughout his life, and not just when he was a student in Antwerp during the 1590s, when he relied on engravings as reference material to make enlarged painted adaptations from Raphael and Michelangelo. The core of Rubens’s full-size painted copies were made in the late 1620s, when he was in Madrid and London and wanted records of Italian works, mostly by Titian, that he could not buy for his own collection.

The bulk of the catalogue entries deals with Italian drawings that Rubens bought during his travels and which, it will be argued, were kept and retouched by him throughout his career. This material documents Rubens’s extensive knowledge and interest in the work of Raphael, Titian, Michelangelo, Giulio Romano and Correggio among many others.

The entries on the retouched drawings reconstruct one of the earliest and largest collections of graphic art assembled by a late Renaissance painter, as well as revealing Rubens’s sophisticated and complex dialogue with Italian art. The first part, Rubens after Raphael, was published in January 2010. Part 2 will be launched in Antwerp on 1 December 2010. The third and last volume is scheduled for July 2011. 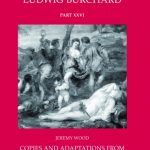