The Flemish research centre for the arts in the Burgundian Netherlands, Musea Brugge, the Museum Hof van Busleyden, the Royal Museum of Fine Arts Antwerp, the Ghent Legal History Institute, jointly organize The Art of Law: Artistic Representations and Iconography of Law & Justice in Context from the Middle Ages to the First World War.

The conference will be held at the Groeningemuseum in Bruges, from 16 through 18 January 2017. The organizers invite junior and senior scholars from various disciplines, as well as museum professionals, to send in a paper proposal by 1 June 2016.

In his Rechtsboek van Den Briel written in 1405 for the Dutch town of Den Briel, Jan Matthijsen, a court clerk, specified what a proper court or deliberation room should look like. “…[T]he courtroom will be made clean inside and filled with paintings and inscribed with good old wise words, from which one can acquire wisdom and cleverness, as one says: to behold is to be aware”. The phrase convincingly illustrates the link, in the late medieval and early modern Low Countries, between law and the visual arts in general, and the use of court room decorations in particular. From town hall decorations depicting the Last Judgement and so-called exempla iustitiae, via the allegory of justice in the figure of a woman and her depiction on frontispieces of books, to the nineteenth-century Palaces of Justice, time and again it becomes clear how the practitioners of law used art and the visual in order to function and reach their ideal: justice.

From 28 October, 2016 through 5 February, 2017, the Groeningemuseum in Bruges will host the exhibition The Art of Law. Three Centuries of Justice depicted. This art exhibition will feature about 100 artworks from over 30 national and international museums and libraries and will focus on themes related to justice as expressed in artworks of various media from about 1500 through 1800. In 2018, from 23 March until 24 June, the Museum Hof van Busleyden in Mechelen, in collaboration with the Royal Museum of Fine Arts Antwerp, will organize the exhibition Call for Justice. Art and Law in the Burgundian Low Countries. This exhibition will focus on the ways in which artworks from the ‘long’ Burgundian period (1450-1650) have negotiated the concepts of ‘justice’ and ‘injustice’. Both exhibitions will be accompanied by respective academic conferences.

The first conference will be organized on 16, 17 and 18 January, 2017 in Bruges and is entitled The Art of Law. Artistic Representations and Iconography of Law & Justice in Context from the Middle Ages to the First World War. Recent years have witnessed a clear rise in scholarship on law and the visual, mostly originating in the wider field of law and the humanities. The Bruges conference wishes to contribute to this scholarship by focusing on imagery in its legal and art historical contexts. The organizers seek to bring together original and interdisciplinary scholarship that questions the role of art in the practice of law, jurisprudence and justice administration from the Late Middle Ages through the nineteenth century.

The exhibitions and the Bruges conference coincide with the fifth and final year of the Belspo Interuniversity Attraction Pole Justice and Populations: The Belgian experience in international perspective 1795-2015 (2012-2017) and its work package (WP4) Long-term self-representations of Justice. A substantial part of the Bruges conference will be devoted to the 19th and 20th centuries, in order to present the research results of the mentioned WP4 to a critical public of peers. The proceedings of the conference will be published in the IAP subseries of Springer’s Studies in the History of Law and Justice.

Paper proposals in English may deal with – but are not limited to:

The second conference, to be held in Mechelen in June 2018, will focus on places where justice was administered as centers of artistic production.

Paper proposals of 20 minutes should be sent as 300 word abstracts including one or two images, together with a short academic CV and publication list, to Stefan.Huygebaert@ugent.be and Vanessa.Paumen@brugge.be by 1 June, 2016 at 17:00. The organizers invite junior and senior scholars from all disciplines involved (art history, legal history, political and/or institutional history, archeology, architectural history and other fields from the humanities) as well as museum professionals. 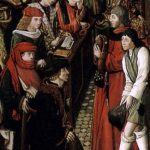