Tummers, who defends her PhD-thesis next Wednesday 16 September, did research on the arguments that 20th-century connoisseurs used for attributing or deattributing works of art. It appeared there was no verifiable method, theory or handbook. Nevertheless, assumptions about an artist’s stylistic development, and the degree of variation in style and quality one can expect in a painter’s oeuvre inevitably play a major role in attribution issues. Seeing is thinking. In order to provide a clearer frame work for attributions to seventeenth-century masters, Tummers studied what  quality criteria were used in the 17th century, and what we could learn from these.

David and Jonathan accepted as a Rembrandt in the 17th century

David and Jonathan is a unique case, since the provenance of the painting can be traced back to the seventeenth century. The first known owner, Laurens van der Hem, was a contemporary of Rembrandt and a renowned art collector. This painting was accepted as a Rembrandt by Van der Hem and other contemporaries. Looking at 17th-century quality criteria in a painting by Rembrandt reveals why. It was exactly those criteria that did not play a role in the deattribution of 1989.

These criteria concern the expression of emotion, the masterly brushwork (loose and highly effective) and the way Rembrandt formed space and hierarchy with light and colors in the scene. An artistic feature critical to Rembrandt can also be found in the painting according to Tummers: Eygentlickheyt (‘lifelikeness’). This quality was highly celebrated by Philips Angel in 1641 as he praised Rembrandt in particular for infusing his biblical scenes with convincingly naturalistic details, which resulted from his careful reading of the Bible and the master’s subsequent ‘high and deep thoughts’ (hooge en verre na-ghedachten).

In the Hermitage painting, David’s rich attire indicates that the artist had carefully read the Bible before he conceived this scene and that he used the passage about the royal garments which Jonathan had reputedly given David to improve upon the traditional depiction of this story. Since David fled from the court with no intention to ever return, it seems likely he would take with him some of his most precious garments, which would, moreover, remind him of his loyal friend Jonathan. Besides, this attire gave the artist the opportunity to create the dramatic contrast between on the one hand the rich clothing of David and his fragile posture, and on the other hand the sparkling colours in the foreground and the dark greys and browns in the background. 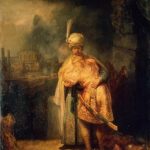