15 and 16 May, the Frick collection will host a symposium about collecting Dutch art in America. The full program has now be announced and can be read here.

Papers will be presented by both American and Dutch scholars, with an interdisciplinary emphasis. Peter Sutton, Executive Director of the Bruce Museum, will deliver the keynote address and presentations will be offered by Walter Liedtke, Ronni Baer, Quentin Buvelot, and Peter Hecht, among others. The symposium will conclude with an interview of a present-day collector of Dutch paintings of the Golden Age. 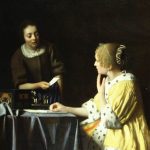