On Tuesday 25 October The masters of the goldsmith guild in Amsterdam from 1701 by the Dutch portrait painter Juriaen Pool II (1665-1745) was restituted to the estate of Dr. Max Stern at the Amsterdam Museum. Concordia University in Montreal, Canada, acting on behalf of the executors of the Estate of Dr. Max Stern and its three university beneficiaries (Concordia, McGill University/Montreal, Hebrew University/Jerusalem) announced the restitution on their website, which includes more information on the Max Stern Art restitution project.

The location for the ceremony is particularly significant as the Dutch museum has just opened a children’s wing in a space that was once occupied by the very orphanage in which Juriaen Pool was raised. The figure of this artist from the Dutch Golden Age now serves as a “guide” for visitors through the exhibitions. Pool married Rachel Ruysch (1664-1750) – one of the most prominent women artists of the time. The couple became court painters to the Elector Palatine, Johann Wilhelm.

The Pool painting is the ninth Nazi-looted artwork to be returned to the university heirs. It was learned that this large-scale painting of some of Amsterdam’s most important citizens had been with the Galerie Stern in Düsseldorf as late as 1937, when it moved to the Galerie Heinemann in Wiesbaden. In the years after the Second World War it was acquired by a casino in southern Germany, where it has been ever since.

In 2004, Sotheby’s contacted representatives of the Max Stern Art Restitution Project regarding the status of the painting. During six years of rigorous research which included the discovery of key archival records in the Netherlands Institute for Art History (RKD), the Holocaust Claims Processing Office (HCPO) of the New York State Department of Financial Services pressed for its restitution.

“We are extremely grateful to all the important stakeholders — the HCPO, the RKD and Sotheby’s — who were critical to the restitution of this work from a German corporate collection,” says Frederick Lowy, President and Vice-Chancellor of Concordia University. “We are in ongoing discussions with a number of German museums regarding works they hold that were taken from the Stern collection, and remain hopeful that more good news will follow.”

Dr. Max Stern (1904-1987) was forced to dissolve his Düsseldorf art gallery during the Nazi period. Following the Second World War, he settled permanently in Montreal, Canada where he became one of the country’s most important art dealers and collectors. He bequeathed the bulk of his estate to three major universities. The Max Stern Art Restitution Project is spearheaded by Concordia through the Office of the President, working in close collaboration with the HCPO as well as with numerous institutions and government agencies worldwide including the Art Loss Register, Interpol and U.S. Immigration and Customs Enforcement. 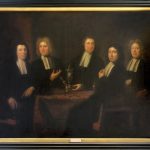