82nd & Fifth, an online feature of the Metropolitan Museum of Art website now features Rembrandt’s Christ Crucified between the Two Thieves: The Three Crosses, 1653 as seen by Nadine Orenstein. It also allows the visitor to make detailed comparisons between the Met’s three states of the print. The feature can be found here.

82nd & Fifth is the Met’s address in New York City. It is also the intersection of art and ideas. We’ve invited 100 curators from across the Museum to talk about 100 works of art that changed the way they see the world. Eleven Museum photographers interpret their vision: one work, one curator, two minutes at a time.

82nd & Fifth is a year-long series of 100 episodes. Throughout 2013, new releases will appear every Wednesday. Sign up for email announcements so you never miss one. 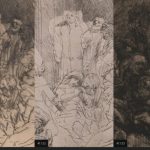