The Royal Museums of Fine Arts of Belgium published the proceedings of the international symposium Animateur d’art, organized by the museum in 2012. This symposium was devoted to the figure of the “animateur d’art”, a driving force on the artistic scene, a person who facilitates the development of the art in all its shapes.

Information from the museum, 10 February 2015

Dealer, collector, critic, publisher… : The animateur d’art and his multiples roles. Pluridisciplinary research of these disregarded cultural mediators of the 19th and 20th centuries

This book gathers new studies, which enlighten the role of the animateur d’art in the development of the arts. The animateur d’art actively participates in the defense of the arts and in the stimulation of the artistic creation in a certain period. He is a key figure positioning himself as a mediator between the different art worlds as well as between the different agents of the cultural environment. His work also consists in building bridges between the artists and his own cultural environment in order to ease the reception of the works and to promote art movements. The authors who contributed to this publication offer a first portrait of this cultural actor who influenced the art scenes from the 19th century to the present. 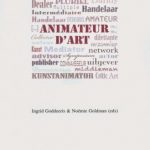