On 10 June 2010 in Istanbul the Van Gogh Museum and the Huygens Institute-KNAW took the Grand Prix in the research category of the European Heritage Awards for the Van Gogh Letters Project. They are delighted to receive this highly prestigious award. The European Heritage Awards jury said, “The Jury greatly admired this fascinating project carried out by the Van Gogh Museum on the Van Gogh letters and the incredible opportunity this project has given to an entire community of researchers and enthusiasts. Thanks to the digitalisation and free internet access of the research, it is now possible to read the entire archive of letters of the painter in their original version and in translation. It was truly exciting to see the reproduction of the original letters and their iconographic references. The project is an example to the world of how effective it is to diffuse and spread significant items of cultural heritage, contributing to the safeguard of the original autograph material.”

Every year the European Commission and Europa Nostra (www.europanostra.org) gives European Heritage Awards to projects that maintain and preserve Europe’s common heritage. The 2010 winners were selected from almost 140 projects in 26 countries. The Van Gogh Letters Project was one of the four winners in the research category. Yesterday evening it was also announced that, in addition to the Award, the Letters Project has also won a Grand Prix, with an award of 10,000 euros.

The international reputation of Van Gogh’s correspondence is based upon its immense value as a document humain and on the enormous wealth of biographical and art historical information it contains. The 900 letters, around 820 by and 80 to Van Gogh, constitute the story of Van Gogh’s search for his destiny: of the close bond with his brother Theo, who supported him unconditionally, of his sometimes troubled friendships, his need for recognition and, above all, of his passion for art and literature. In both the new digital and print editions the letters are reproduced exactly as Van Gogh wrote them, without textual refinements, re-translations, amendments or excised passages.

The Van Gogh Museum would like to thank the Turing Foundation, the Prins Bernhard Cultuurfonds, the International Music and Art Foundation, Linea d’Ombra and the Vincent van Gogh Foundation – which has given the vast majority of the letters on long-term loan to the museum – for their exceedingly generous financial support. The contribution and expertise of Metamorfoze, the National Programme for the Conservation of Heritage on Paper, enabled us to record the entire letters collection digitally. In addition the Letters project was made possible with the aid of the Orentreich Family Foundation and donations by Shigeru Myojin and Sherif Nadar, as well as by Ernst Nijkerk, in memory of Inge Nijkerk – von der Laden. 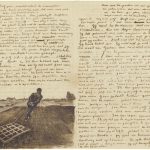