Ferdinand Bol (1616-1680),
The council of the Gouda militia under the command of colonel Govert Suijs, 1653
Museum Gouda, Gouda

A little personal background to start off with. I grew up near ‘s-Hertogenbosch and was introduced to the world of art, culture, and history when very young. Despite my unflagging interest in this entire field, I didn’t decide to study art history until I turned twenty-six. I continued working for the Dutch government during my first year, but then resigned to focus entirely on my studies. It was a big step, but I was utterly convinced it was the right thing and have never regretted it for a moment. 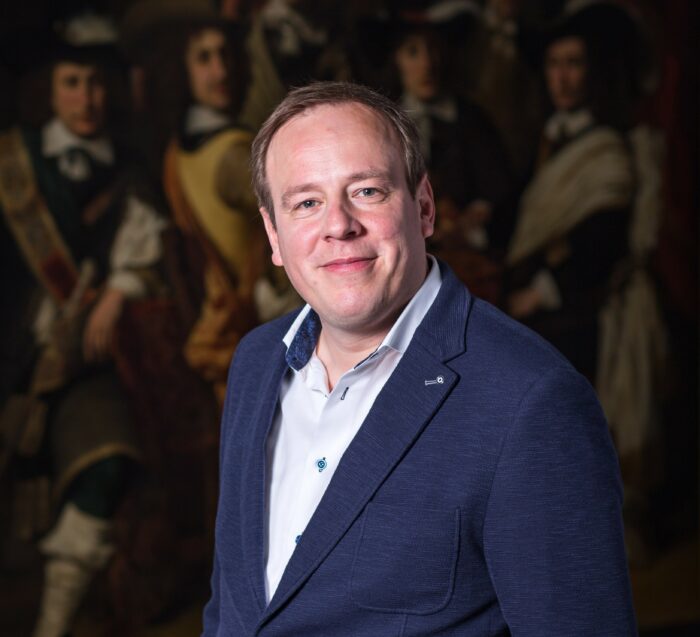 Ingmar Reesing in front of The council of the Gouda militia under the command of colonel Govert Suijs by Ferdinand Bol, 1653, Museum Gouda, Gouda (photo: Billy-Jo Krul)

In 2008 I gained a Master’s degree in Art History before 1800 with distinction. My thesis focused on devotional sculpture from the Low Countries. I followed this up with a research master’s in Art History of the Low Countries in its European Context in 2009, with a thesis on late medieval tomb sculpture in the Northern Netherlands. After graduating I spent several years working at the Van Gogh Museum and in association with the Rijksmuseum. From 2013 to 2018 I dedicated my time to my PhD at the University of Amsterdam. My doctoral research focuses on the function, production and distribution of late medieval portable devotional items in the Low Countries, including micro- and ivory carvings. I am particularly interested in early sixteenth-century microcarvings, including boxwood prayer nuts and miniature retables. These intriguing gems were long thought to have been made in the Southern Netherlands, but my research shows that the craftsman who made them, Adam Dircksz, was based in the Northern Netherlands – his workshop was in Delft. My PhD research is part of the publication Small Wonders (2016) and led to the exhibition of the same name that was shown in 2016–2017 at the Art Gallery of Ontario in Toronto, The Metropolitan Museum of Art in New York, and the Rijksmuseum in Amsterdam. 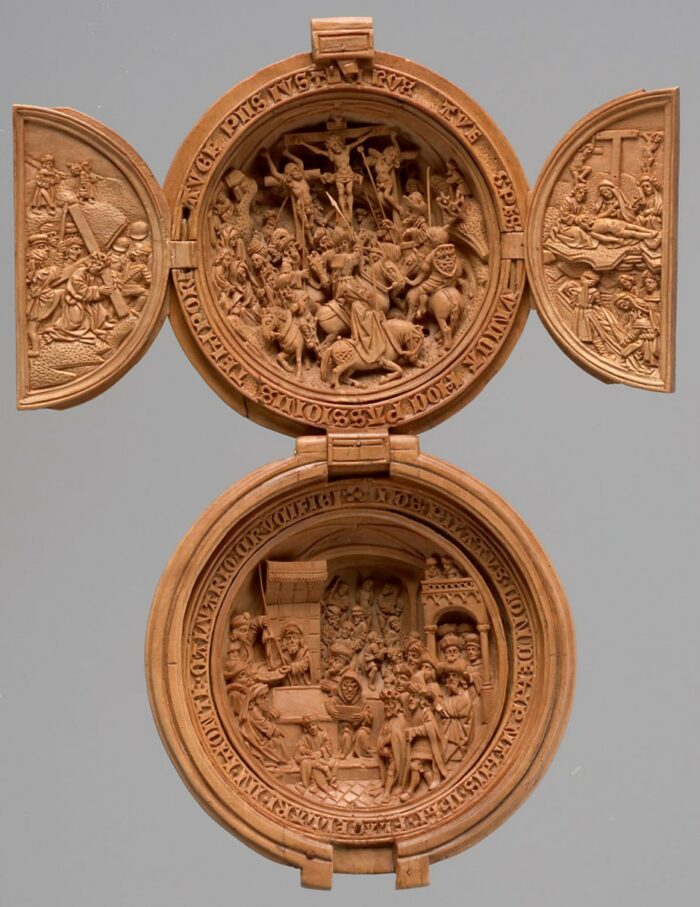 Besides my appointment at the University of Amsterdam, I worked on exhibition and research projects and published articles. Recent contributions appeared in Collection Neutelings (2016), Prayer nuts, private devotion, and early modern art collecting (2017) and Netherlandish sculpture of the 16th century (2017). I also acted as project curator at Museum Krona (formerly the Museum of Religious Art), where I created the exhibition Meditation, initiated the exhibition The City as a Convent and helped redesign the museum.

Since May 2018 I have held the position of curator at Museum Gouda, with responsibility for an unique and diverse collection – Old Masters as well as modern and contemporary art, and an applied arts section. One of the exhibitions I organized in my current position is Painting Outdoors, focusing on the nineteenth-century artists’ villages of Barbizon in France and its Dutch counterpart of Oosterbeek. In 2019 I worked with great enjoyment on the Still Life exhibition and the catalog (in Dutch) Still Life: Dutch and Belgian still life from 1870 to present (WBooks). The publication and exhibition provide an overview of modern and contemporary art in the Netherlands and Belgium – surprisingly, it is the first study of this size to be published on this important subject. 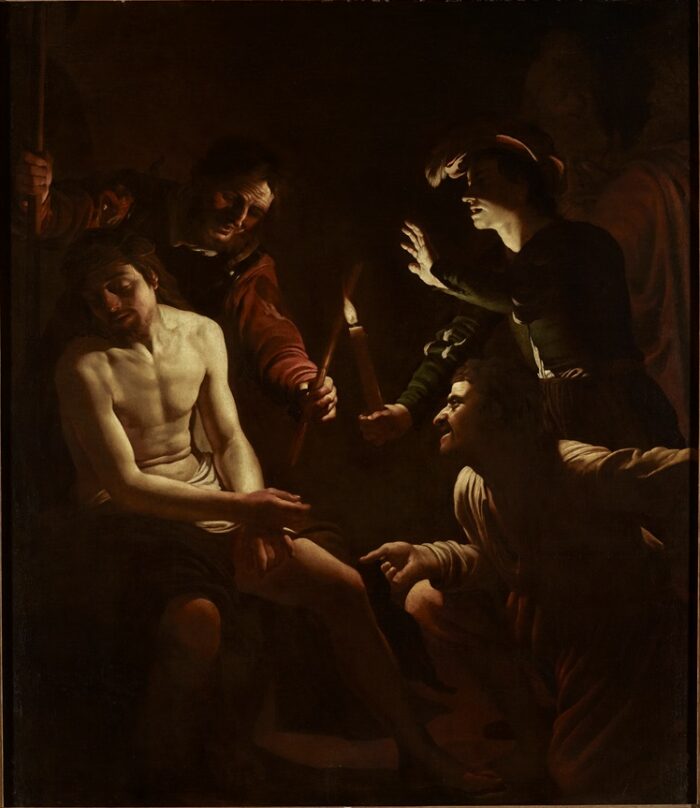 I am currently preparing two exhibitions for 2021. The first is Koele Wateren (“Cool Waters”) about the Netherlands as a land of water, based on a large number of loans from the Rijksmuseum collection. In the autumn of 2021, Museum Gouda will present the exhibition Kaarslicht (“Candlelight”). This large-scale show will highlight paintings of evening and nocturnal scenes stretching back over four centuries. In their encounters with the masters of candlelight, visitors will be transported to an intimate world full of nocturnal tension and drama. Loans from home and abroad will come to Gouda, including works by Van Honthorst, Rembrandt, Schalcken and the nineteenth century artist Van Schendel. The exhibition will be accompanied by a publication.

Museum Gouda is one of the oldest museums in the Netherlands and is located in Gouda’s historic city center in the former Catharina Gasthuis, a shelter for the poor and homeless. It manages the versatile collection of the city of Gouda, among other things. This includes the monumental altarpieces from the adjacent St. John’s Church, commissioned by local guilds and fraternities in the latter half of the sixteenth century. Many who worked on them were among the most influential artists of the day. An absolute masterpiece from the city’s collection is the militia piece The council of the Gouda militia under the command of colonel Govert Suijs by Ferdinand Bol. The museum possesses a large collection of work by artists from The Hague and Barbizon schools, such as Bonvin, Daubigny, Vollon, Tholen, Weissenbruch and Israels. It also has work by painters of the Amsterdam School, the Tachtigers (“artists of the 1880s”) movement and symbolists such as Redon and Degouve de Nuncques. Another section of the collection contains Gouda pottery. Around 1900, Gouda grew into one of the most important centers for decorative pottery. Masterpieces from Gouda’s main pottery factories are on display: from Art Nouveau to the Amsterdam School and from classical items to pieces made in modern times. 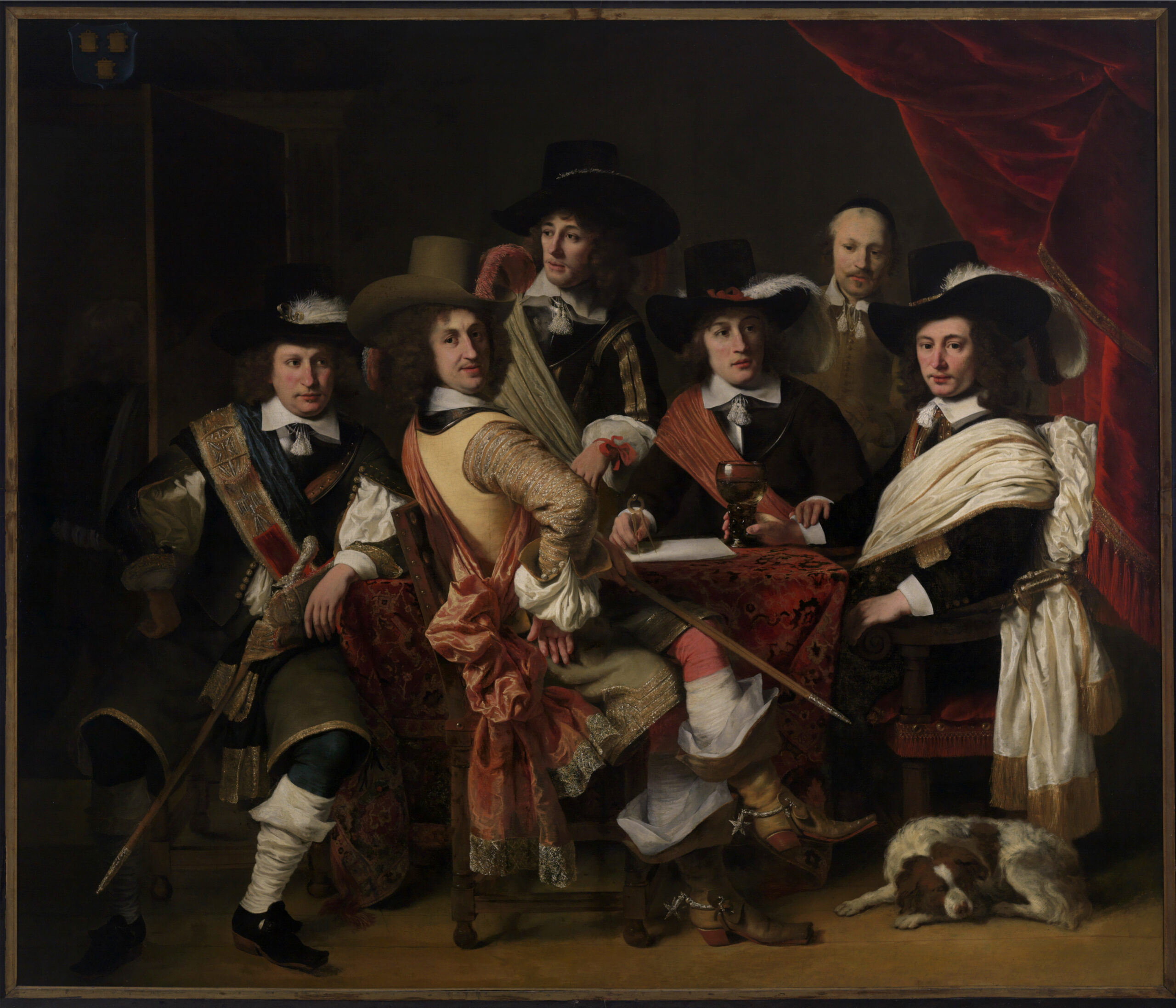 Ferdinand Bol (1616-1680),
The council of the Gouda militia under the command of colonel Govert Suijs, 1653
Museum Gouda, Gouda

Gouda preserves a heritage ensemble that is unique in Europe and unknown to the general public to this day. It was made by the best artists of the sixteenth century. However, it is divided up and managed by two parties. St. John’s Church has magnificent stained-glass windows from the sixteenth and seventeenth centuries and the preparatory working drawings or cartoons. Museum Gouda has an unique collection of sixteenth-century altarpieces from the church. The windows, cartoons, and altarpieces survived the turbulent eras of Iconoclasm and Reformation and together form a peerless art ensemble. Museum Gouda and St. John’s Church now plan to reunite the different parts of this heritage, to enable a wider public to become acquainted with these treasures. This is to take place in 2022 when Gouda will host elaborate celebrations to mark the city’s 750th anniversary. We will convert St. John’s Church, which has been a Protestant church for centuries, characterized by its relative austerity, back into a sixteenth-century, pre-Reformation Catholic church. We will repair the “broken ensemble” by reinstating the altar paintings in their original places, on reconstructed altars. We will bring back the statues and the sixteenth-century organ and revive the late-medieval splendor of colors on pillars, walls, and vaults. Visitors will be spirited back in time and be able to experience the late-medieval church with all their senses. In preparation, we are currently conducting a major research project to establish what the church looked like before 1572 and how the objects in it were used. 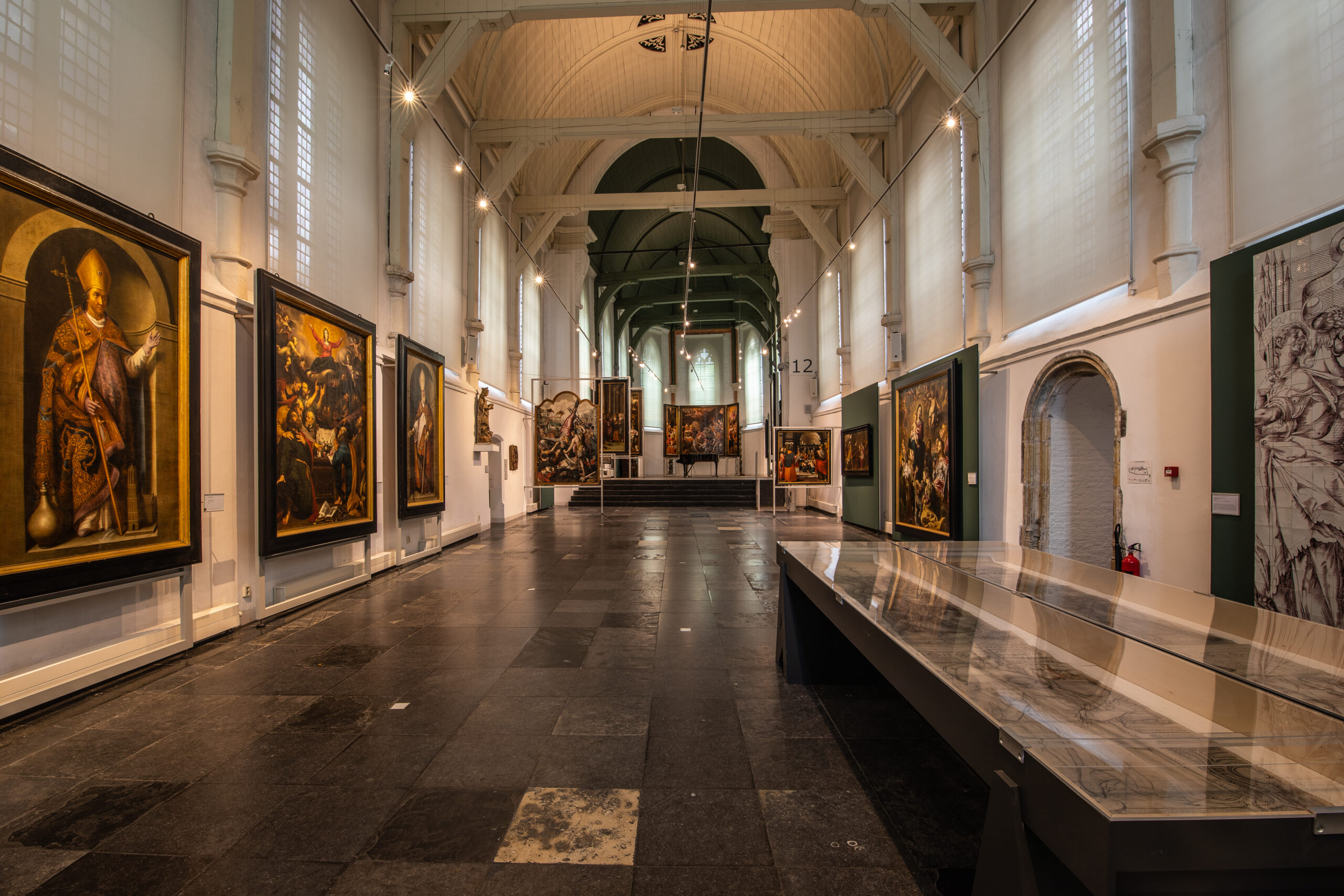 The chapel of Museum Gouda with sixteenth and seventeenth century altarpieces and two cartoons from the Church of St John (photo: Hans Tibben)

In 1552 St. John’s Church was almost completely destroyed by fire. It was soon restored and endowed with new, monumental stained-glass windows. Some of the windows were donated by important rulers, such as Philip II of Spain and Margaret of Parma, Governor of the Netherlands. When Gouda became Protestant in 1572, the windows were not destroyed, as they were elsewhere. In consequence, roughly half of all the sixteenth-century stained glass in the Netherlands is to be found in St. John’s Church. More astonishingly still: more panes continued to be added from 1594 onwards! This created an ensemble of stained glass spanning the period before and after the Reformation. And that is unprecedented in the Netherlands.

To make the stained-glass windows, that artist starts by making preparatory drawings known as cartoons. These are beautiful, life-sized and meticulously detailed charcoal and chalk drawings – for windows that in some cases are as much as 22 meters in height. If we were to lay out these drawings from the sixteenth and seventeenth century end to end, the resulting strip would extend for an astonishing 1.77 kilometers. The cartoons were made by artists including Dirck and Wouter Crabeth, Lambert van Noort, Joachim Wtewael, and Hendrick de Keyser. These cartoons too somehow survived the turbulent times. They can undoubtedly be considered part of our world heritage, and are justifiably included in the CODART Canon.

After the devastating fire in 1552, guilds and religious fraternities commissioned new altarpieces from famous artists such as Anthonie Blocklandt van Montfoort, Dirck Barendsz. and Pieter Pourbus. Monumental baroque paintings and triptychs adorn the altars. Altarpieces like these were lost during the Reformation in all parts of the Netherlands – but once again, Gouda was the exception. The council went in search of a good place in which to preserve these precious objects, such as the town hall. In 1872 they were assembled in one location for a historical exhibition. This exhibition eventually led, two years later, to the founding of a municipal museum. It is there that they can be admired to this day.

Conducting research and creating exhibitions are not tasks to be done alone. It is incredibly important that you are able to contact fellow curators and other professionals at home and abroad with your questions, ideas, and requests. That is why a network organization such as CODART plays such an essential role. This applies all the more in times of crisis, such as in today’s COVID-19 pandemic, which is placing such strenuous demands on us as curators and museum organizations. And it is particularly in these difficult times that we see so much evidence of this heartwarming spirit of fellowship. So I very much hope that we will soon be able to meet again – and in good health!

Ingmar Reesing is a curator at Museum Gouda. He has been a member of CODART since 2018.