My participation in the CODARTfocus held in Mechelen in the spring of 2018 was important to me in many ways. Following an extensive, multi-year reconstruction of the Museum of Fine Arts in Budapest, a historic building that first opened to the public in 1906, our permanent exhibitions will be cast in a substantially restructured form. We are reorganizing our collections within a fundamentally new conceptual framework. It was immensely valuable and instructive to see how a comparable transformation had been effected in the even older building of the Museum Hof van Busleyden, in Mechelen, where a sixteenth-century city palace and its permanent exhibition had to be reshaped to meet the professional standards and visitor needs of the twenty-first century. At the time of our visit, we were fortunate enough to witness the finishing stages of the installation. 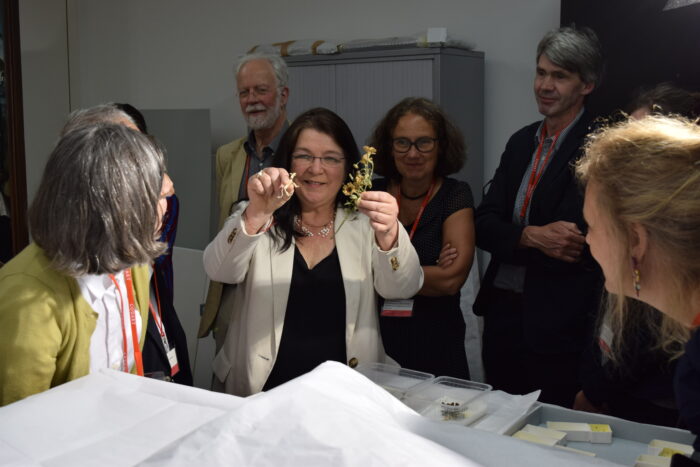 In the restoration workshop we had the opportunity to see the museum’s unique sixteenth-century collection of retable cabinets, the Enclosed Gardens (Besloten Hofjes). The collection of Seven Enclosed Gardens belonged to the former convent of Mechelen’s Hospital Sisters. Enclosed Gardens were mainly produced in the city of Mechelen. Only a handful have survived. They are sublime examples of artistic skill, religious handicraft, and devotional tradition. For the Hospital Sisters, these retables provided a vehicle through which to express devotion and spirituality. In consequence, besides textiles, metals, glass, painted panels, and altarpieces with polychrome figures, they also contain relics. Today they help us to enter the conceptual world of religious communities. These art objects were created by the Mechelen sisters from precious materials with meticulous elaboration, primarily for private devotion. Yet they display striking similarities, in terms of spiritual content, to the Hungarian convent artworks of the seventeenth and eighteenth centuries, of which the Christian Museum in Esztergom contains several fine examples. Though far apart in space and time, both sixteenth-century Flanders and Baroque-era Hungary were under the dominion of the Catholic Habsburgs.

Besides being treated to an inside view of the preparations for the new permanent exhibition of the Museum Hof van Busleyden and a visit to its restoration workshop with the Enclosed Gardens on display, the CODARTfocus program also included a visit to a temporary exhibition, organized by the Museum Hof van Busleyden in partnership with the Royal Museum of Fine Arts, Antwerp. The special exhibition Call for Justice: Art and Law in the Burgundian Low Countries highlights the fascinating interaction between art, the practice of law, and the concept of justice in the geographical region under the jurisdiction of the Great Council of Mechelen during its heyday, from the mid-fifteenth to the mid-seventeenth century. The exhibition is structured around three themes: “justice,” “the judiciary,” and “injustice.” Call for Justice sets up comparisons between Netherlandish artworks on law and justice and places them within their original juridical, historical, and cultural backgrounds. Besides showing how they interacted with this context, it also shows how they powerfully visualized one of the most fundamental and universal human aspirations: the longing for justice, and its complex confrontation with reality. Call for Justice shows masterpieces by numerous artists, including Quinten Metsys, Maarten van Heemskerck, Pieter Bruegel the Elder, Maerten de Vos, Peter Paul Rubens, Anthony van Dyck, and Philippe de Champaigne. These works traveled to Mechelen from diverse museums and from national and international private collections. 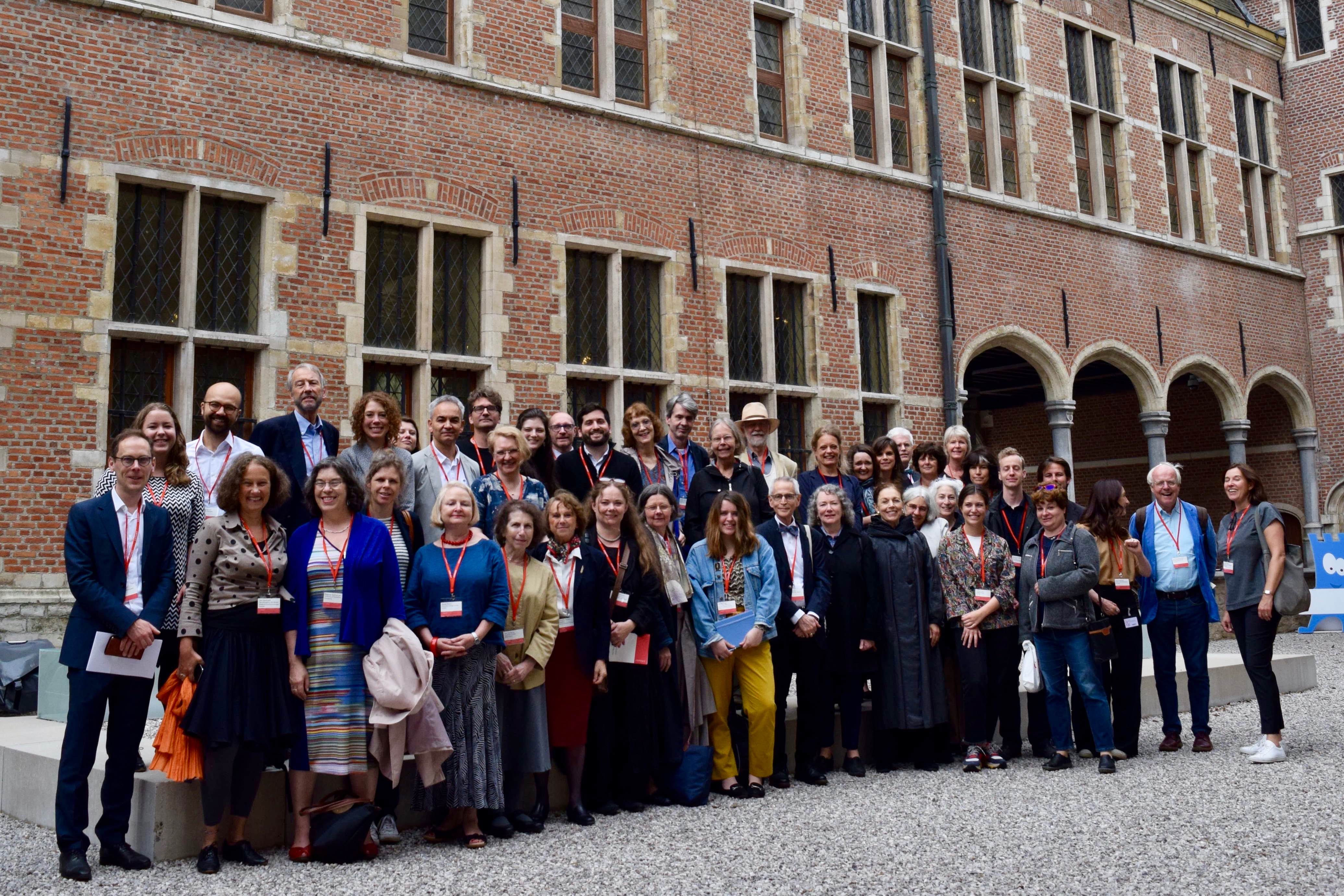 A Merry Company. Participants of the CODARTfocus Mechelen

The CODARTfocus agenda also included a tour of several churches, a highlight of which was a visit to the St. John’s Parish Church (Sint-Janskerk). This parish had no shortage of funds in the seventeenth century, an affluence that is reflected in the church’s many treasures. Built in above the altar is Peter Paul Rubens’ famous triptych of The Adoration of the Magi. Behind the side panels is a mechanism for turning the paintings at regular intervals so that all the scenes can be admired. To me it was a particular pleasure to see this altarpiece in situ, because one of Rubens’s studies for Caspar’s head is preserved in our collection. The Budapest museum purchased this oak panel in 1908 from the Firm J. Goudstikker. 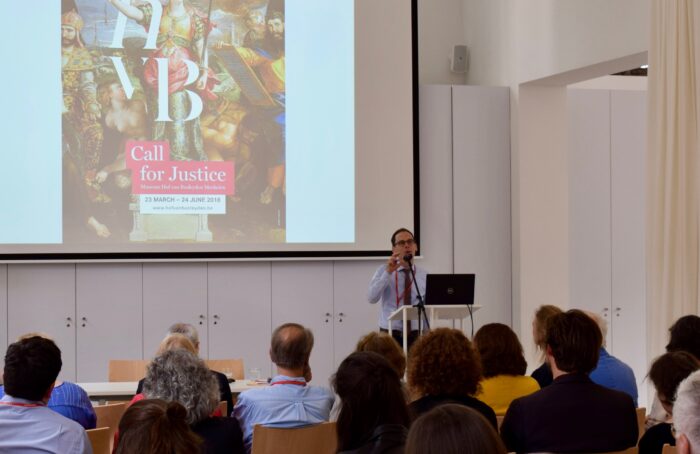 Samuel Mareel, Curator at Museum Hof van Busleyden, during his lecture about the exhibition Call for Justice. Art and Law in the Burgundian Low Countries

At the same time as working on the reconstruction of the Museum of Fine Arts building, the creation of a new storage space, and the renewed design and installation of the permanent exhibition in the Old Masters’ Gallery, we have also been hard at work for over two years developing our upcoming special show Rubens and His Age: The Century of Flemish Baroque Painting, which will run from October 2019 to February 2020. Our most important partner is the Liechtenstein Princely Collection, Vienna, which has agreed to provide on loan inter alia part of Rubens’s grand Decius Mus cycle (“The Interpretation of the Victim”), beside which we plan to hang the special tapestry woven after the painting (Palacio Real, Madrid), enriched with gold and silver threads. This will be the first time that the canvas and the tapestry will be on display together. The Budapest Museum of Fine Arts collection also holds a large tapestry woven from wool and silk by Jan Frans van der Hecke in 1690 after Rubens’s composition depicting the encounter of Abraham and Melchizedek. The oil sketch for the tapestry will be provided on loan  for our exhibition by the Fitzwilliam Museum, Cambridge. The program of the Mechelen CODARTfocus also included a visit to the De Wit Royal Manufacturers, where we had the opportunity to see both the collection and the weaving mill, and I concluded an agreement with the institution’s staff on the restoration of the tapestry mentioned above. The generous funding offered in support of our Rubens and His Age show by Mr. David Maenaut, head of the Flemish Delegation to Hungary, will make it possible to accomplish the professional cleaning and restoration of the tapestry, which may therefore be one of the featured items of the show.

Júlia Tátrai is Head of the Department of Old Master Paintings at the Szépmüvészeti Múzeum in Budapest, Hungary. She has been a member of CODART since 2003.