The great Flemish artist and entrepreneur Peter Paul Rubens was famous for dictating letters in one language while having someone read literature to him in another, even as he stood at his easel to paint. This early multitasker foreshadows our own age, not only in the multiplicity of tasks that he was prepared to embrace at once, but also in the abundance of channels through which he communicated with a range of interlocutors. Rubens’s visual communications are renowned.

Yet verbally, too, Rubens was an avid communicator. He exchanged letters with close friends and distant colleagues, princes and businessmen, and with many of the international leading lights of his time, such as the Dutch humanist and diplomat, Constantijn Huygens. Rubens’s interlocutors hailed from a range of locations, and so any consideration of his correspondence is necessarily imbricated in both the local histories of numerous places and in the interconnected, international network these letter exchanges created. Just as Rubens’s images communicate via a diversity of styles and approaches, so too do his letters. His linguistic choices themselves display a broad range: written at times in his native Dutch, his letters also communicated extensively in Italian and sometimes French, frequently with a smattering of Latin. Their verbal form also shows great breadth and diversity. Through Rubens’s letters—letters he wrote, alongside those written to him and those that mention him—we can trace an international network of thinkers, weighing in on a wide array of topics of concern in their time.

Investigation of Rubens’s correspondence intersects with numerous themes that have interested scholars in recent years. Issues related to artists’ biographies, the early modern culture of friendship, the Republic of Letters, exchanges of knowledge, artistic theory, word-image relationships, and mobility, to mention just a few, have driven numerous scholarly studies. Questioning how individuals communicate has rarely seemed more topical than it does today, in our age of Tweeting world leaders, Instagramming teenagers, and myriad professionals corresponding digitally with colleagues across the globe.

Recent books assert that the culture of letter-writing and letter-reading was intimately bound to that of making and viewing images (Shira Brisman, Albrecht Dürer & the Epistolary Mode of Address, Chicago: University of Chicago Press, 2016) and that this culture of scholarly knowledge production and exchange was as visual as it was textual (Tine Meganck, Erudite Eyes: Friendship, Art and Erudition in the Network of Abraham Ortelius (1527–1598), Leiden: Brill, 2017). This is all the more reason—in our own era of massive communication via both text and image—to closely preserve and examine the letters of someone who was also a great visual communicator: investigations of how Rubens communicated so abundantly visually and verbally allow for an exploration of questions about communication itself, and about the varied ways and means used across time and space to transmit ideas.

Beyond Rubens’s own correspondence, there are also the many letters of his contemporaries that shed light on his life and career. These, too, reveal the richly textured ways in which letters functioned in Rubens’s circle. A timely example is the correspondence of Balthasar Moretus, Rubens’s lifelong friend and colleague and head of the Plantin Press. Moretus kept a copybook of the letters he sent, which is preserved in the Museum Plantin-Moretus in Antwerp. This example is timely not only given this museum’s forthcoming exhibition, Baroque Book Design: A Tale of Friendship and Collaboration, opening September 28, 2018 and tracing Moretus’s relationship with Rubens and other artists, but also given the evidence of several of these letters, which relate closely to Rubens’s Martyrdom of St. Andrew (Madrid, Real Diputación de San Andrés de los Flamencos—Fundación Carlos de Amberes). This painting has recently been on loan in the Rubenshuis in Antwerp (through September 17, 2018) and I discuss it further in a publication accompanying the loan (Rubens’s St. Andrew “de los Flamencos”: Altarpiece Enframed by a Spanish-Flemish Community / Altaarstuk omkaderd door een Spaans-Vlaamse gemeenschap, Antwerp: Rubenshuis/BAI, 2018).

From Moretus’s letters to Jan van Vucht, a Flemish merchant living in Madrid, we learn that in 1630 the merchant was eager to commission a painting from Rubens. Although Van Vucht hoped to negotiate a lower price, Moretus was not encouraging. He informed Van Vucht that what the merchant was willing to pay would not get him much, perhaps a piece with one or two figures. Several months later, he mentioned having spoken with Rubens and that, for the amount Van Vucht was prepared to pay, Rubens could not possibly do any of the three desired subjects, which are not specified. At best Van Vucht might acquire a “Diana with two nymphs” or another subject with two or three figures.1 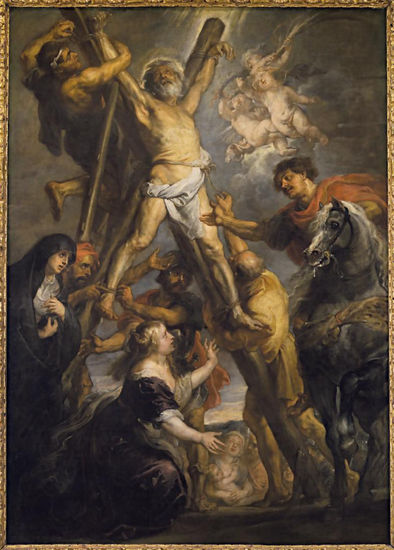 By the time Rubens painted The Martyrdom of St. Andrew for Van Vucht in 1638–39, Van Vucht had no doubt resigned himself to paying a far higher sum, since the composition is richer, more complicated, and more densely peopled than Moretus’s proposals almost a decade earlier. Rubens’s compelling rendering of the apostle’s crucifixion at the orders of a Roman proconsul and against the wishes of the populace is a far cry from a blithe scene of Diana and her nymphs.

There is consensus among scholars that Rubens’s correspondence and others’ letters that intersect with his career are a critical yet rather inaccessible trove of primary material, scattered across numerous countries and institutions. While some sources are digitally available (e.g. the letter excerpted above), many are not. Fortunately, there is now a digital resource that enables scholars to apply more varied approaches when conducting research on Rubens’s letters: Early Modern Letters Online (http://emlo.bodleian.ox.ac.uk/home), an initiative of Oxford University, its Bodleian Library, and the Oxford-based research project “Cultures of Knowledge.” This online catalogue—an ongoing project—has already produced an extensive online database of letters digitized from published and unpublished sources. The letters have been scanned and presented with metadata (transcription, writer and location, sender and location, date, language), rendering them easily searchable. In addition to presenting more than 900 letters to, from, or mentioning Rubens, EMLO includes short explanatory essays about Rubens’s life, correspondence, and its content, as well as a short list of relevant sources.

EMLO provides a repository and meeting point for data about Rubens’s correspondence with that of other early modern letter writers. Consequently, it brings scholars in fields normally somewhat removed from one another into closer contact, with searches based on names, places, and other keywords triggering surprising results and revealing little-known connections. Given Rubens’s broad range of activities and connections, his network intersected with some of the most remarkable, court, diplomatic, and intellectual networks of his time. 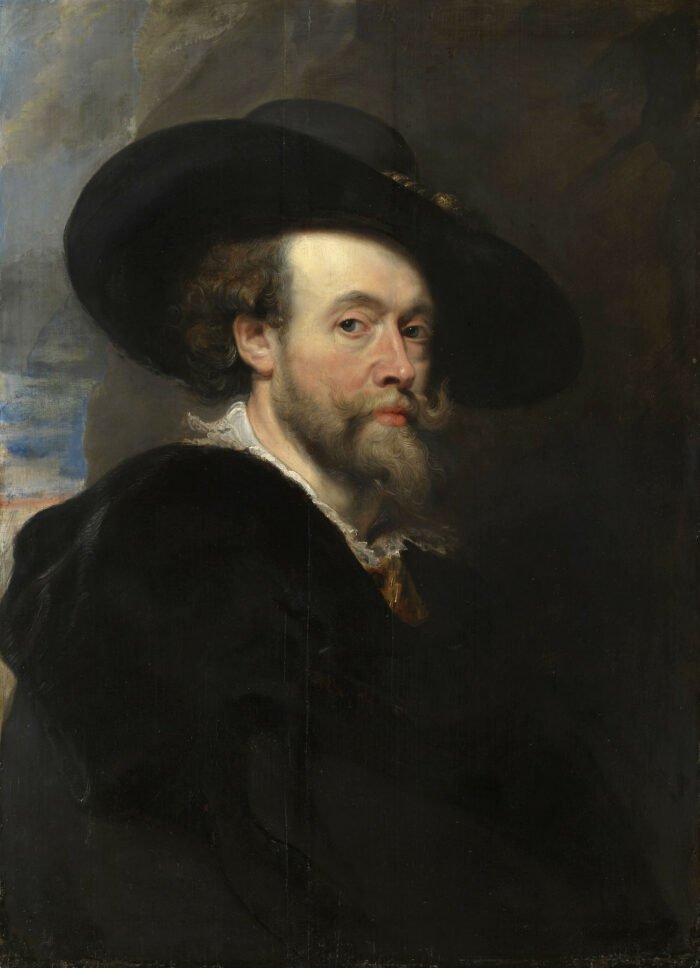 The letters included in EMLO are principally those published in Rooses/Ruelens, without scans of the original archival documents. It is thus critically necessary to update and enrich the preliminary online catalogue of Rubens’s letters by fully documenting these letters via digital photographs of the original letters and investigation of their material properties. Attention to the material qualities of Rubens’s correspondence, thus far a little studied field, would allow his letters to be considered as both objects unto themselves and vehicles carrying ideas. Scholars have recently begun to attend more closely to the material qualities of letters: what kind of paper and ink they employ, their watermarks and dimensions, the writer’s folding techniques, visual flourishes or illustrations included in the letters, handwriting, seals and crossed-out words or phrases, among other characteristics. Investigating such qualities illuminates broad questions about social history—the sourcing, cost, and distribution of paper, for example—but can also reveal letter writers’ highly personal tendencies.

In the next few years, the Rubenianum hopes to initiate the fundamental on-the-ground research and documentation of Rubens’s correspondence in order to provide an important resource for scholars and the public. Archives are cultural repositories that are ripe for new exploration, documentation, dissemination, and interpretation in our digital age. Building on the “art history of the archive” that some scholars have begun to invoke, the Rubenianum aims to contribute to an even broader “cultural history of the archive,” whereby such archival materials as letters are viewed for their own material properties and as conveyers of information, with both the material and immaterial qualities pointing outward toward a range of questions of relevance in cultural history and modern society. By viewing the archive in this way, the Rubenianum would hope to achieve its goal of gathering, preserving, and making accessible the raw materials of Rubens’s correspondence, contextualized with documentation to facilitate study.

Abigail D. Newman is Research Advisor at the Rubenianum in Antwerp and Professor at the University of Antwerp.