This article was originally published in the CODART eZine, no. 10 Autumn 2018.

For this eZine issue, Micha Leeflang, curator of the recent Magical Miniatures exhibition at Museum Catharijneconvent, was interviewed by Sarah Van Ooteghem, Assistant Curator at the Print Room of the Royal Library of Belgium in Brussels. 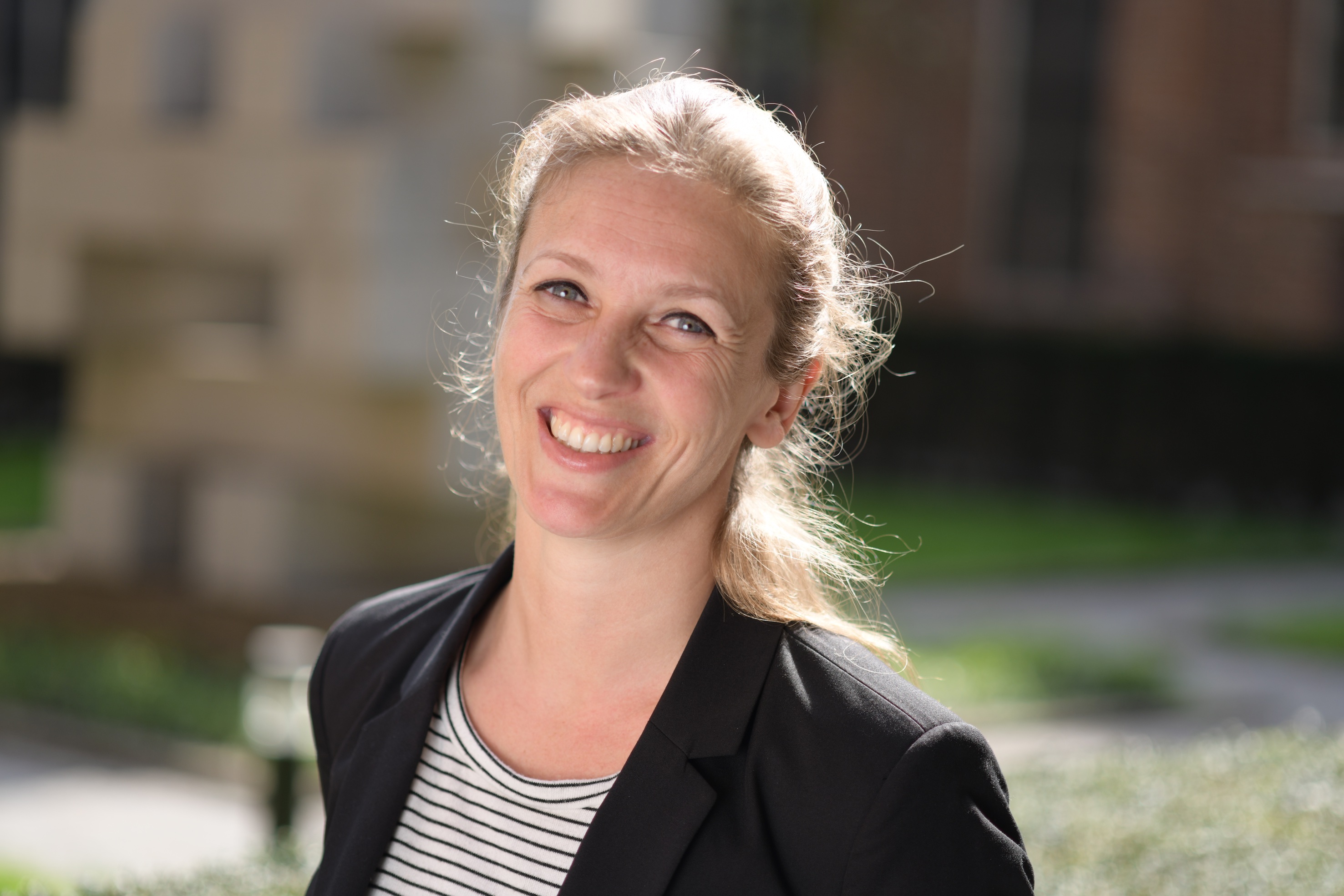 Micha Leeflang has been working at the Museum Catharijneconvent in Utrecht for twelve years now. As Curator of Medieval Art, she is responsible for the collection of manuscripts and paintings, sculptures, and liturgical textiles of the 15th and 16th centuries. She is also an authority on the technical examination of art objects. She studied art history at the University of Groningen, completing her PhD on the workshop practices of the Antwerp painter Joos van Cleve (c. 1485/90–1540/41) under the supervision of the professors Maximiliaan Martens and Molly Faries. She then worked as a research assistant as part of the Rijksmuseum’s Early Netherlandish Paintings Project, which resulted in the first online publication in the museum’s series of collection catalogues, Early Netherlandish Paintings in the Rijksmuseum, Amsterdam. Volume I: Artists Born Before 1500. For this project, she carried out much of the infrared reflectography (IRR) research and scientific examination.

Micha Leeflang produced her first exhibition at Museum Catharijneconvent in 2008 on the subject of 17th-century painting: Painted with Passion: Masterpieces from the Golden Age. Later she focused exclusively on the museum’s medieval collections, including its manuscripts. In 2009 she delved into this material, which was for her then relatively new, as the curator of the exhibition Masterly Manuscripts: The Middle Ages in Gold and Ink, a wide-ranging survey of medieval book production in Utrecht in the Middle Ages, including over 100 manuscripts. Masterly Manuscripts focused on manuscripts and devotional books from Utrecht monasteries possessed by Utrecht University Library, and was prepared in close collaboration with the institution. 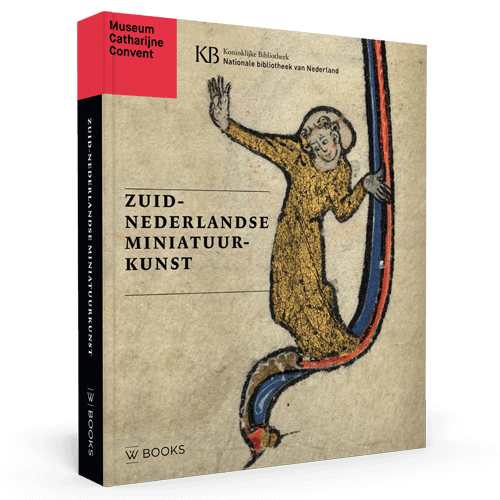 Cover of the book to which the exhibition was linked

What was the background underlying the recent exhibition Magical Miniatures?

An opportunity for a new partnership between Museum Catharijneconvent and a research institute arose after Anne Korteweg, former curator of mediaeval manuscripts at the Dutch National Library completed the A.W. Byvanck project (compiling an inventory of illuminated manuscripts in Dutch public collections and Northern Netherlandish specimens in foreign collections, drawn up between 1987 and 2002). Korteweg then turned her attention to the publication of the most beautiful manuscripts that had been produced in the Southern Netherlands and are now present in the Netherlands. She was assisted in this project by Anne Margreet As-Vijvers, a specialist in Southern Netherlandish manuscript illumination, and thirteen other art historians who were prepared to contribute essays relating to their areas of expertise. The plan of “the two Annes,” as the book’s leading lights were soon being called, shifted into top gear when Museum Catharijneconvent and the National Library decided to support their work by linking the publication to plans for an exhibition and a technical research project.

What was the biggest challenge for the museum in turning a publication into an exhibition?

Together with Ed van der Vlist, the current curator of medieval manuscripts at the National Library, I was asked to flesh out an exhibition concept. It became an extremely interesting partnership, especially since Ed van der Vlist, as a book and manuscript scholar, focuses primarily on the textual aspects of manuscripts. The nature of this material also imposes a particular constraint: you have to choose where – at which specific miniature – to exhibit the opened manuscript.

While we were forging our first plans, and well into the preparations for the exhibition, we had only the book’s table of contents to go by. It listed a total of ninety manuscripts to be presented in six thematic chapters, in more or less chronological order, which would illuminate the wider background of the works in terms of cultural history and book and manuscript history. For the exhibition, we ended up selecting 69 works dating from the 10th to the 16th century, over half of which came from the National Library. These were supplemented with manuscripts from the museum’s own collection and those from other institutions, such as Museum Meermanno, the Rijksmuseum, and university libraries. 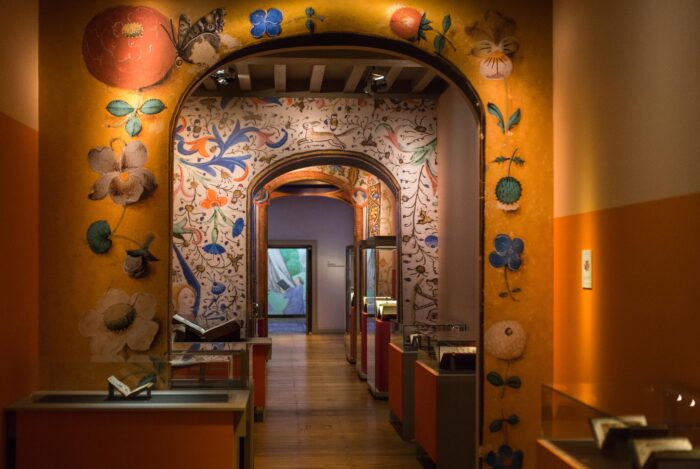 How did you turn your concept into an actual exhibition?

When developing the concept for the exhibition, we initially based ourselves to a large extent on the answers to a questionnaire asking potential visitors about their expectations. These revealed that people’s greatest desire is to understand what they are looking at. They wanted answers to specific questions: Suppose you want to buy a book in the Middle Ages: How do you do it? What would it cost? And how long would it take to produce a book? What did a medieval bookcase look like? Why are miniatures in manuscripts so key to forming our image of the Middle Ages? We made an introductory film in which several experts addressed these and other questions. We also clarified such issues throughout the exhibition, partly with the aid of a booklet containing brief remarks on each object. For the same reason, we set up the exhibition on the basis of three major themes: the books (“a medieval library”), clients (“for the elite”) and makers (“magical masters”).

The catalogue discusses other aspects of the miniatures, besides which there are a number of recurrent themes arising from the chosen structure, with chapters arranged in chronological order. For the exhibition we made the difficult decision of leaving out two interesting themes because they had already been addressed in earlier exhibitions. The collaboration between the Northern and Southern Netherlands is a marvelous subject, but it had already been covered in the exhibition Masterly Manuscripts (2009). For the same reason we decided to omit the subject of pilgrims’ badges, which had been discussed in the exhibition Pilgrims: The Road to Santiago de Compostela (2011).

The museum’s Research and Education Department argued strongly in favor of an exhibition that would be a “total experience.” This meant involving the senses of touch and smell as well as sight, and getting visitors to participate actively, the underlying rationale being: doing helps you to see better. This introduced variety into the experience of looking at the exhibits. After each theme, visitors found themselves at a workbench where they were given a practical assignment, such as composing or coloring in a miniature, that stimulated reflection on what they had seen in that gallery.

What was your most personal contribution to the exhibition?

Besides developing and elaborating a concept for the exhibition, I also worked on the technical examination of the materials of the miniatures with the aid of infrared reflectography (IRR). That was an extremely enjoyable challenge for me because it’s my own specialism and the analysis of miniatures using IRR is still in an experimental phase. Still, this was not exactly virgin territory for me, since for the exhibition The Secret of the Middle Ages we had even analyzed embroidery using this technique! 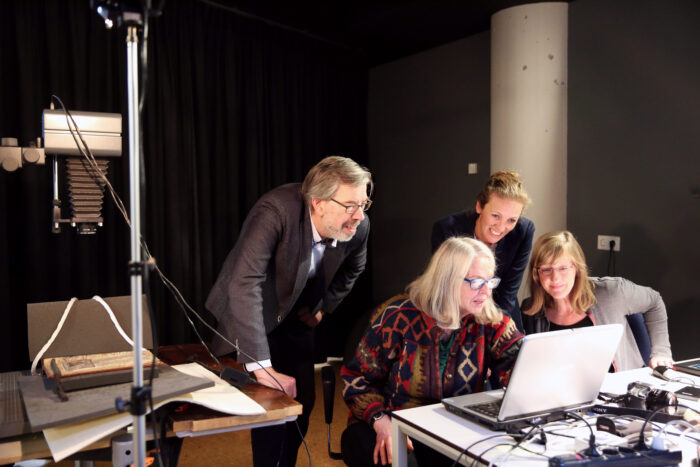 Collaboration with Margreet Wolters (RKD), Claudine Chavannes-Mazel (formerly of the University of Amsterdam) and Jan Bos (National Library of the Netherlands)

Only quite recently has it been possible to inspect the artist’s underlying initial design, the underdrawing, using IRR in the case of illuminated manuscripts, because this technique generally requires the object to be placed in a vertical position. New cameras have now made it possible to image the objects horizontally. We achieved a first in this field, with our pioneering use of IRR to study a large number of manuscripts from the same region, in this case the Southern Netherlands.

Even so, while compiling an inventory, it remains difficult to formulate the questions we want to explore at this early stage of the IRR analysis of miniatures. Some discoveries were made almost by chance. For instance, it may be difficult to inspect the underdrawing because of the impenetrable, gold-containing paint layers above it. This can be remedied by imaging the miniatures from the reverse side. Proceeding thus, we made the remarkable discovery of several trees in the underdrawing of Jacob van Maerlant’s Der Naturen Bloeme. These little trees lay beneath the image of some sea creatures, obscured by a gold background. They had evidently been prepared before the decision was made that their positioning there was illogical. One thing that emerged very clearly from the research is that IRR applied to miniatures and manuscripts can generate new insights about the working methods of miniaturists. We demonstrated this in the exhibition in the form of short videos, which I myself thought very successful. 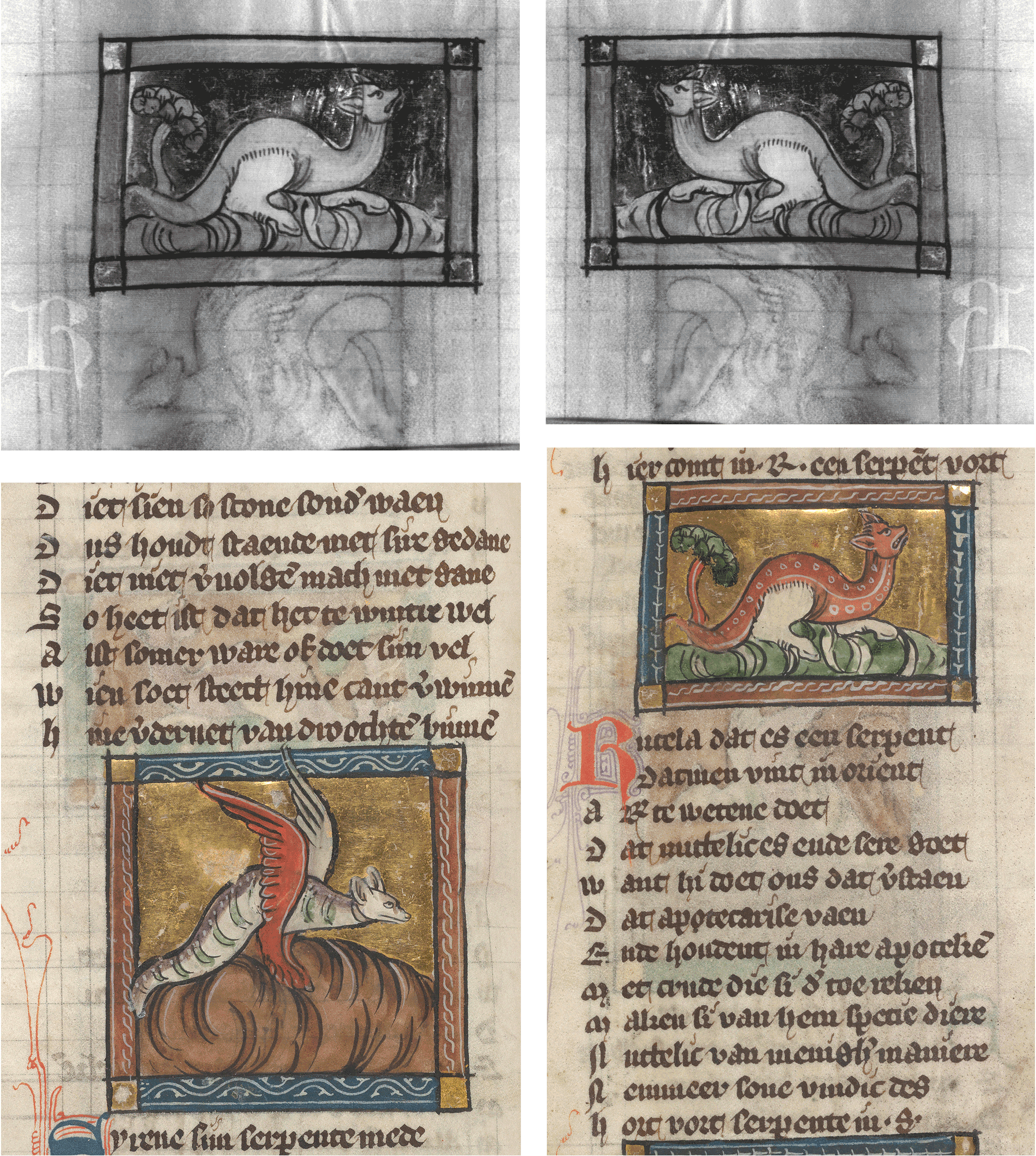 What aspect of the exhibition pleased you most?

In 1989 Museum Catharijneconvent put on an exhibition, in collaboration with the Pierpont Morgan Library in New York, entitled The Golden Age of Dutch Manuscript Painting. That event focused on medieval miniatures from the Northern Netherlands. It is still regarded as the most successful exhibition that was ever organized in the museum. I am therefore extremely pleased with the public’s fantastic response to the exhibition Magical Miniatures. In fact, visitors gave us a score of 9 out of 10! The media coverage was also extremely positive, including a 5-star maximum in the daily newspaper NRC-Handelsblad. But what gave me most pleasure was seeing visitors who were moved to tears by the beauty of the objects on display. It was particularly the colorfastness of the miniatures that moved people, since they transport you directly back to the moment when they were made.

Are any similar exhibitions planned for the near future?

At present we are involved in talks with Museum Meermanno with a view to producing an exhibition of Books of Hours from the Netherlands, with works from our two museums and obviously also from the National Library of the Netherlands.

What other plans do you have as a curator?

For next year we are setting up a very exciting exhibition project. From 24 October 2019 to 26 January 2020, Museum Catharijneconvent will be showing North & South: Medieval Art of Norway and Catalonia in collaboration with the Museum of Cultural History of the University Museum of Oslo (Norway) and the Episcopal Museum of Vic (Catalonia, Spain). By bringing together two of the most beautiful and best-preserved collections of medieval art, we will demonstrate that there was a shared European culture throughout the Middle Ages. Borders were fluid and cultural objects and ideas enjoyed considerable mobility. Although there was practically no direct contact between artists from the outer edges of Europe – due to the thousands of kilometers dividing them – there are striking similarities between the objects from Catalonia and Scandinavia. The lack of comparable objects in Central Europe makes it hard to take on board that the entire western region of Europe once derived inspiration from a shared arsenal of representations, symbols, expressions of belief, and forms of expression. The underlying concept behind the project is the fact that the world-class medieval collections of Norway and Catalonia allow us to see and experience materials that were lost in the central region due to a variety of causes, such as wars, iconoclasm, the French Revolution, and “Baroquification.”

In addition, I’m particularly looking forward to getting back to projects involving 16th-century paintings, my original specialism. Right now we’re working on two ideas related to this subject area. One is an exhibition with an overview of art from Utrecht from the Middle Ages to the present day, to include embroidery and other crafts as well as painting and sculpture. A second project relates to the transition from Catholic to Protestant painting, which I’m currently developing together with my colleague Tanja Kootte, J.G. van Oord Jzn. Curator for Dutch Protestantism. Watch this space!

Micha Leeflang is Curator of Medieval Art at Museum Catharijneconvent. She has been a member of CODART since 2007.

Sarah Van Ooteghem is Assistant Curator of Master Drawings, 1500-1800 at the Print Room, Royal Library of Belgium. She has been a member of CODART since 2012.