The Adoration of the Magi, Utrecht, ca. 1460
Museum Catharijneconvent, Utrecht

The collection of sculpture belonging to the Museum Catharijneconvent is one of the most important in the Netherlands in terms of both quality and quantity. Its core consists of the collections of the Aartsbisschoppelijk Museum Utrecht (ABM, Archiepiscopal Museum Utrecht) and the Bisschoppelijk Museum Haarlem (BMH, Diocesan Museum ), both of which came to be housed in 1976 in the new Rijksmuseum Het Catharijneconvent, together with other ecclesiastical collections. After its privatization in 1995, the museum was given its present name; it has the largest and most important collection of ecclesiastical art in the Netherlands. The sculpture holdings comprise more than 1,800 objects, the majority produced in the Northern Netherlands before 1600. 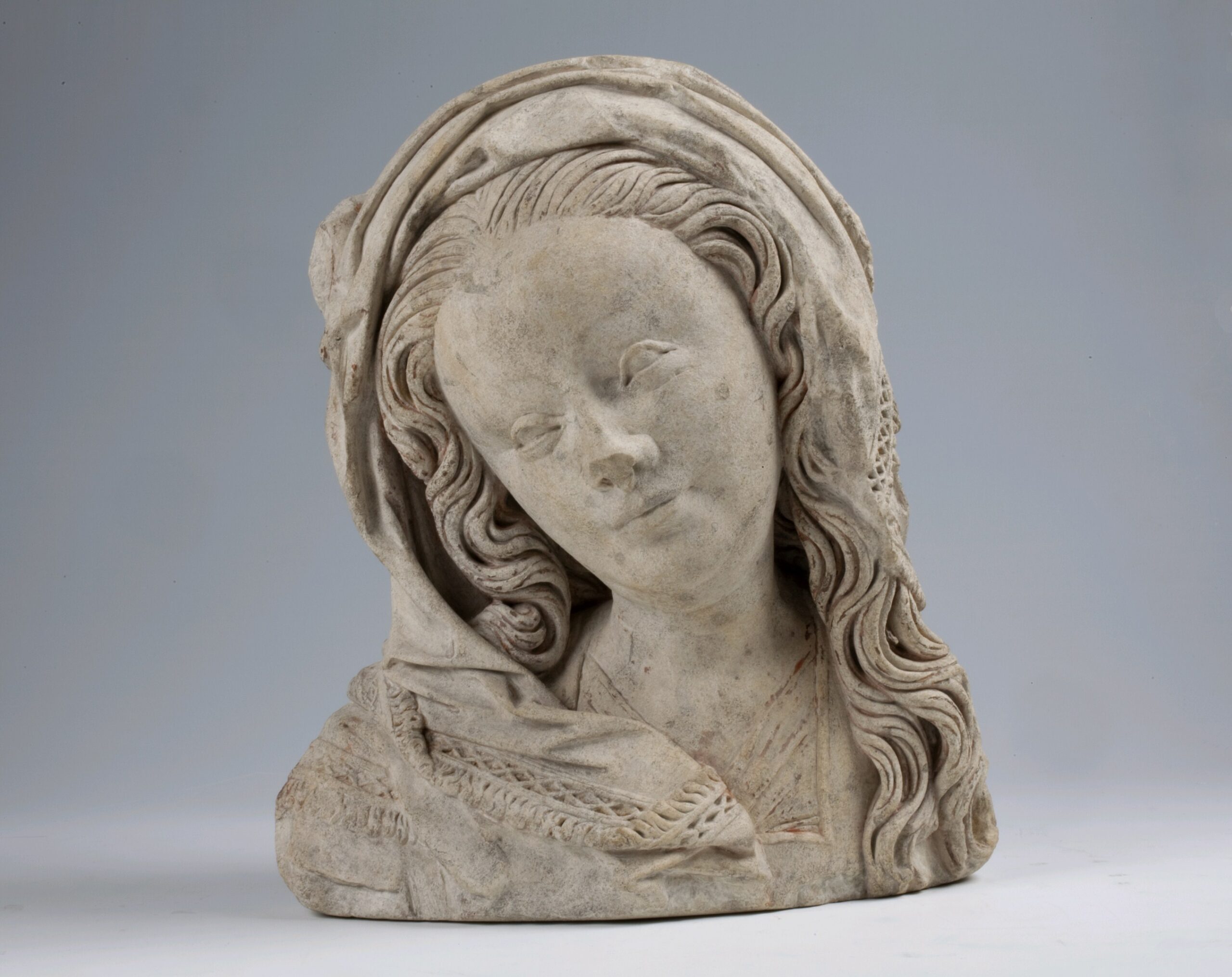 The exhibition Surviving the Iconoclasm: Medieval Sculpture from Utrecht 1430-1530 – which can be seen at the Museum Catharijneconvent Utrecht until 24 February 2013 and then at the Suermondt-Ludwig Museum in Aachen from 14 March to 16 June – includes more than ninety pieces of sculpture made of wood, stone and pipe clay. In addition to twenty-six statues from the Museum Catharijneconvent, more than thirty lenders from the Netherlands and abroad have put objects at the disposal of the exhibition, thereby enabling us to provide an overview of the wealth and beauty of Utrecht sculpture of the late Middle Ages.

To mark the exhibition Surviving the Iconoclasm, a CODARTfocus meeting was held on 28 January, the second in cooperation with the Contact Group Early Netherlandish Art. More than fifty people from the Netherlands, Belgium, Germany, France and Norway took part in this symposium. The program naturally included an enlightening tour of the exhibition, during which various experts clarified selected pieces and there was much discussion about technique, style and attribution. The lectures dealt with the realization of the exhibition, ongoing research, and proposals for future research projects. Several new insights were also shared with the participants.

Marieke van Vlierden, one of the organizers of Surviving the Iconoclasm, presented the plan to set up an international database of makers’ marks – including workshop marks and monograms – on sculptures, furniture and panels made in the Netherlands and the German-speaking regions (Central Europe) in the period 1300-1700. The instigators are Marieke van Vlierden (independent researcher, Utrecht), Michael Rief (curator and head of collections, Suermondt-Ludwig-Museum, Aachen), Seppe Roels (freelance curator, Mechelen) and Micha Leeflang (Curator of Medieval Art, Museum Catharijneconvent, Utrecht). The participants include Ria De Boodt (independent researcher/postdoc research assistant, Artesis Hogeschool Antwerpen and Hogeschool Gent), Marc Peetz (restorer at the Rheinisches Amt für Denkmalpflege) and Kim Woods (senior lecturer in art history, Open University Milton Keynes, UK). The RKD (Netherlands Institute for Art History) in The Hague has already expressed its interest in the project and will engage in the discussions in the near future. 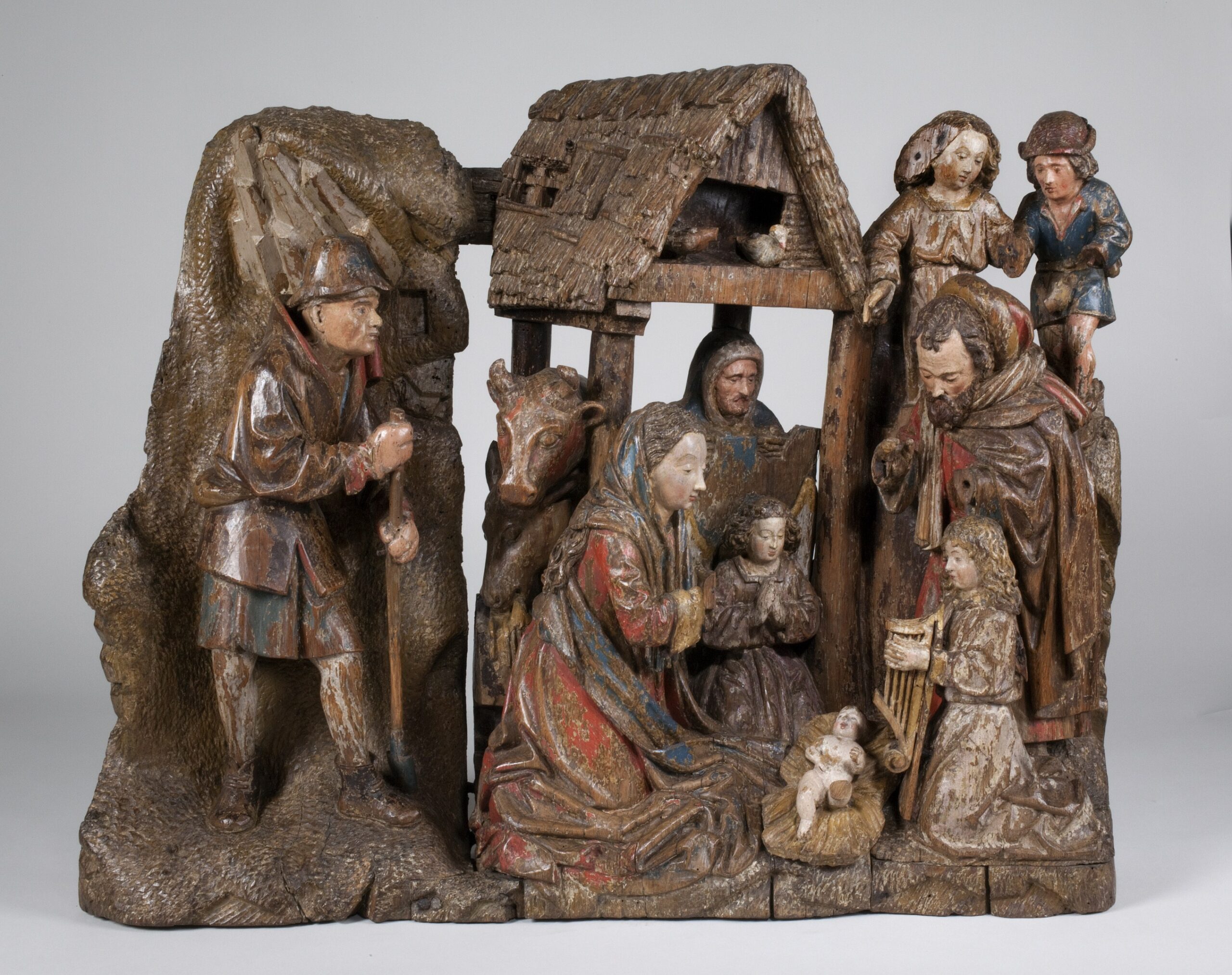 The Adoration of the Shepherds, Utrecht, ca. 1490-1500
Museum Catharijneconvent, Utrecht 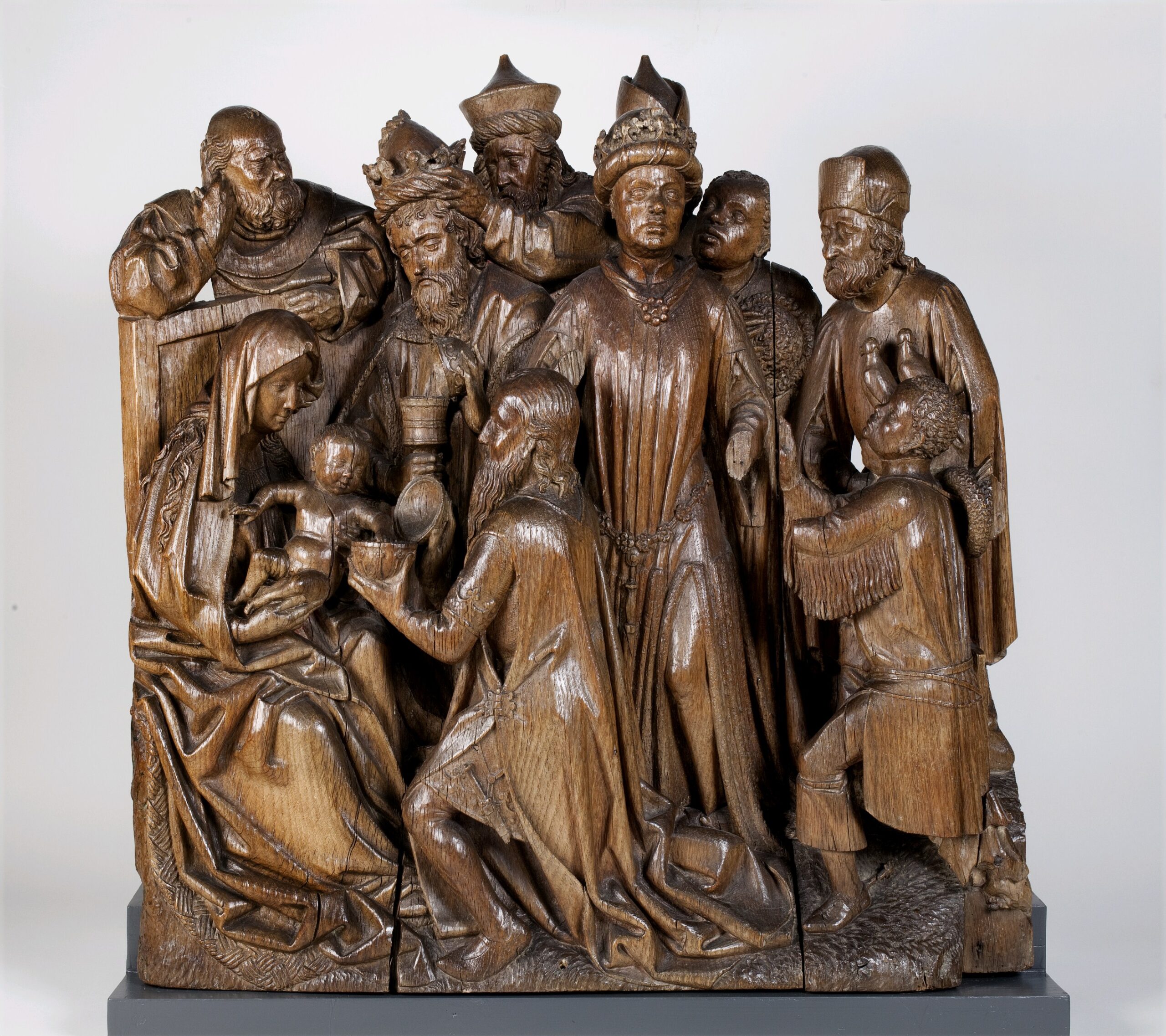 The Adoration of the Magi, Utrecht, ca. 1460
Museum Catharijneconvent, Utrecht

Aleth Lorne, freelance curator of sculpture, and Michael Rief, curator of sculpture and head of collections, Suermondt-Ludwig-Museum, gave a talk with the title “Insight or lack of insight? Questions about the materials and techniques of sculptures in the Late Gothic period in Utrecht.” They stressed the fact that surprisingly little technical research is being done on fifteenth- and sixteenth-century Utrecht sculpture. Although wooden and stone sculpture has been studied to some extent, pipe-clay sculpture has hardly been subjected to technical examination. Two aspects of this were discussed. The first was the construction of wooden and pipe-clay altarpieces and the relationship between these two groups of sculptures, as well as their installation in the altar frames. Were wooden and pipe-clay statues installed in the same way? The pipe-clay fragment with the Swooning of Mary in the collection of the Museum Boijmans van Beuningen displays various holes in the back where it was mounted in the retable. These holes are very similar to those seen in several fragments of wooden altarpieces. Two retable fragments, one displaying the Adoration of the Magi (BMH bh144) and the other the Adoration of the Shepherds (ABM bh275), both in the collection of the Museum Catharijneconvent Utrecht, are composed of various elements held together by small wooden slats and nails. These joinings are most likely original and are somewhat similar to the construction of several fragments of Antwerp altarpieces. Aleth Lorne emphasized that systematic research into mounting holes could be very important for a better understanding of how altarpieces were constructed. 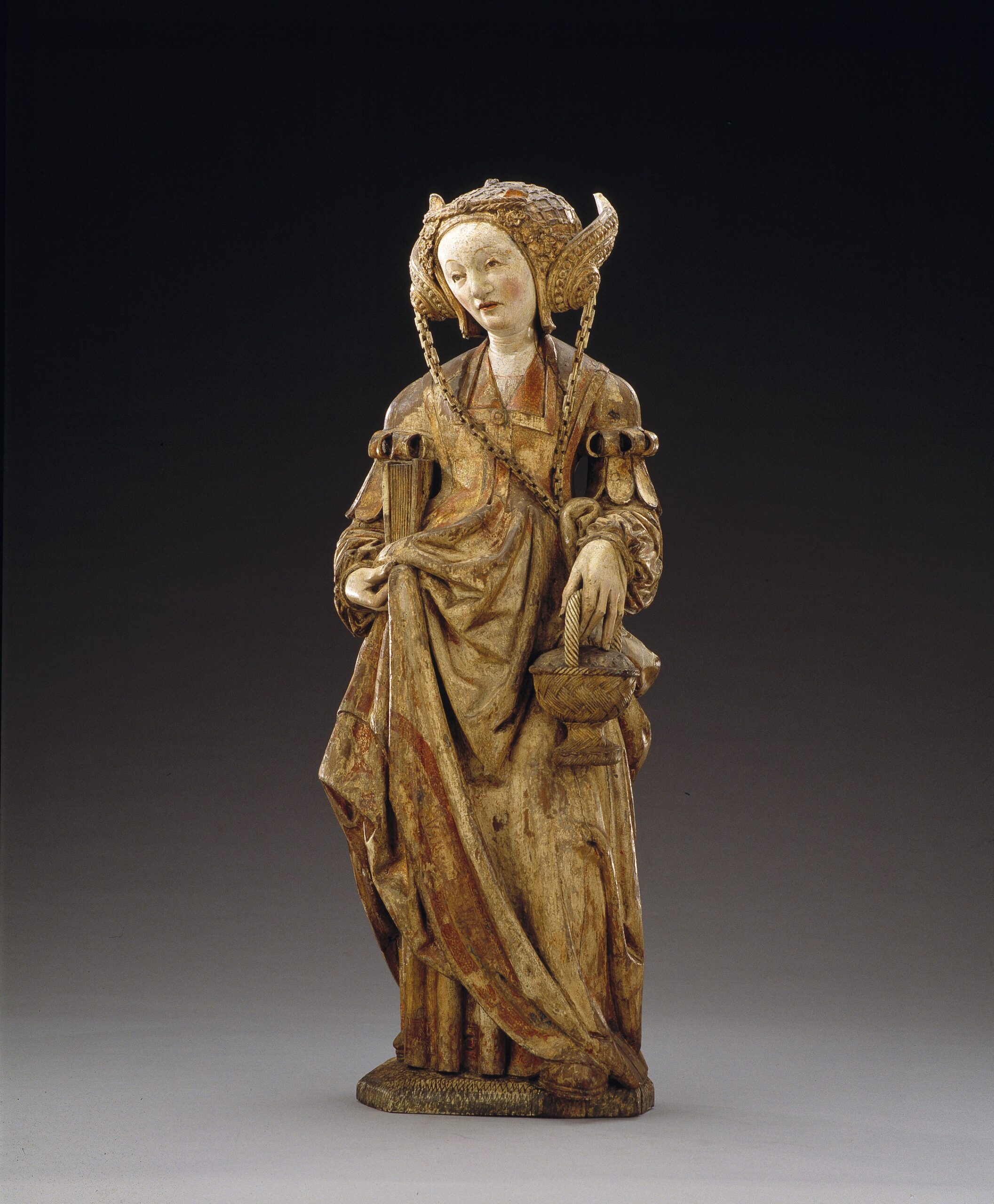 The second aspect discussed by the restorers was the way in which brocade and other textiles was imitated by means of polychromy on wooden and stone sculptures (Aleth Lorne), and the punch patterns on two statues attributed to the Master of the Utrecht Female Head of Stone (Michael Rief). This part of their talk sparked a discussion about which artisans were responsible for the polychromy. Archival documents have shown that statues were often decorated by painters, but in the period preceding Jan van Scorel (1495-1562), Utrecht can hardly be said to have had a school of painting. Were the Utrecht artisans who decorated sculpture with polychromy actually specialists who had devoted themselves completely to painting statues? Or were they book illuminators? Or was there in fact a school of painting of which we know nothing? Another possibility is that artists from elsewhere were hired to do this work. Michael Rief pointed out the similarities in the decorative patterns seen on the Utrecht statues of Mary Magdalene (Münster, LWL-Landesmuseum für Kunst und Kulturgeschichte, Westfälisches Landesmuseum, I 36) and Saint Dorothea (Aachen, Suermondt-Ludwig-Museum, SK 605) to the polychromy on sculptures originating in Antwerp and Mechelen.

Ingmar Reesing’s lecture, titled Handy saints: research into small devotional objects, elucidated his Ph.D. research at the University of Amsterdam. Until now, little research has been done on micro-carvings and pipe-clay sculptures from the Northern Netherlands. Small objects such as pipe-clay statues of saints, ivory pax or portapaz, and prayer beads were intended for private devotion. Particularly little is known about the production of prayer beads – also called “prayer nuts” – which are small, richly decorated boxwood carvings containing minuscule biblical scenes. We know only one wood carver by name: Adam Theodorici (Adam Dirksz), who signed a prayer bead now preserved in Copenhagen. This master’s known work includes other extremely refined objects, such as elaborately decorated knife handles. 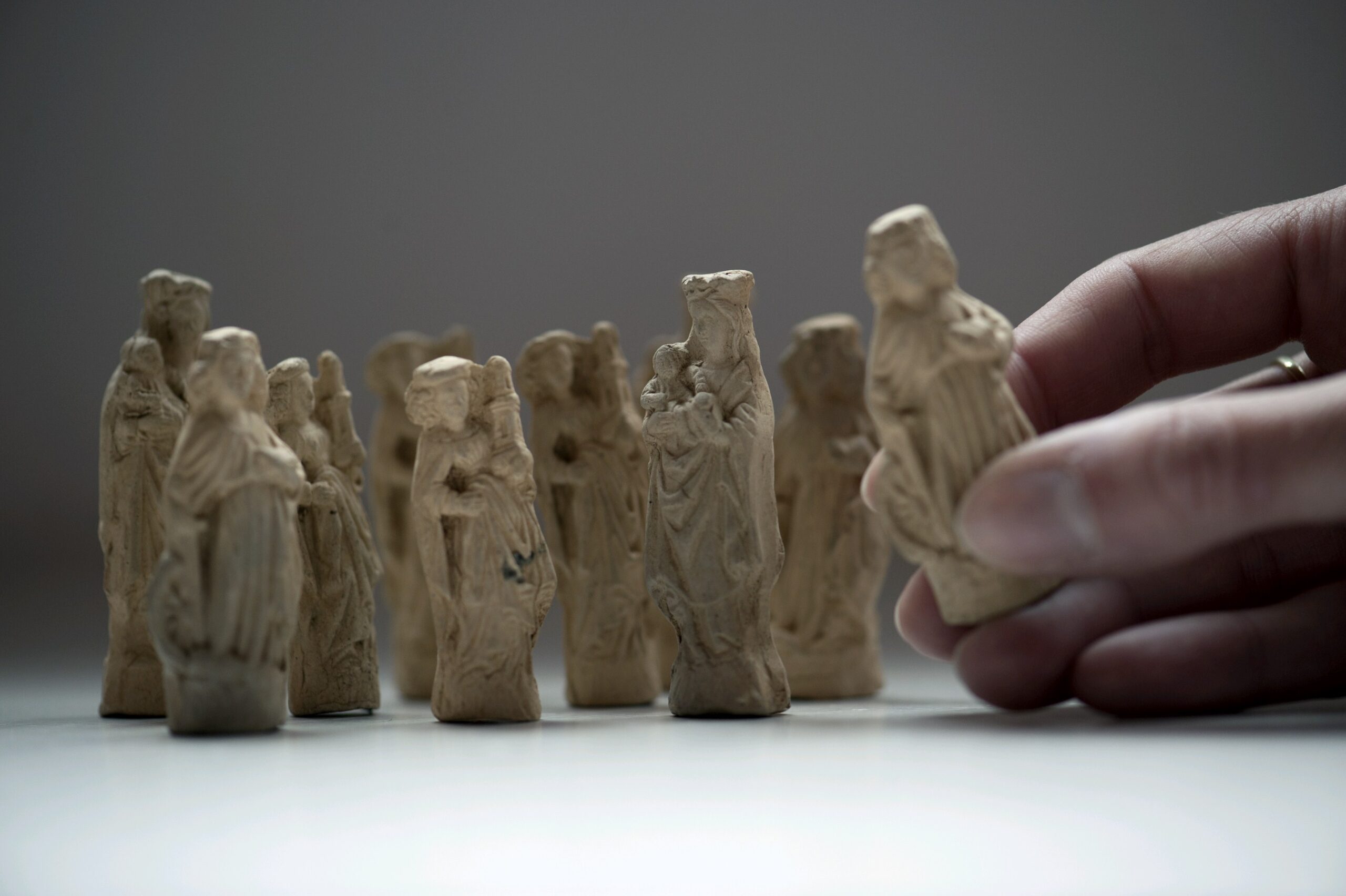 A great many devotional objects made of pipe clay have been found in Utrecht, where numerous statues of saints were made of a type of clay that turns white when baked. Although it was long assumed that pipe-clay statues were produced only in Utrecht, this is certainly not the case. Devotional objects of pipe clay were also made in Delft, Leiden, Amsterdam and Liège. Moreover, wooden statues patterned after Utrecht pipe-clay statues have been found in the Rhineland and Cologne. And it is possible that the pipe-clay statues made in Utrecht served as examples for woodcarvings or metalwork made outside the Netherlands, in places as far away as Slovenia and Poland.

Although it is frequently said that pipe-clay statues were mass-produced, the large and often richly decorated pipe-clay statues – such as the Virgin and Child from Zwolle (Stedelijk Museum, Stichting Emmanuelshuizen collection, 16593-3) and the reliefs made for altars (including Rotterdam, Museum Boijmans Van Beuningen, BEK 1054 B and Amsterdam, Rijksmuseum, BK-1972-156) – seem to have been the work of specialists, particularly their polychromy. The small statues of saints intended for private devotion were possibly the by-products of pottery.

The morning session prompted a discussion about materials. What caused a patron commissioning a sculpture to choose wood, stone or pipe clay? It was concluded that the material chosen depended on the object’s function. As Hans Nieuwdorp and Marieke van Vlierden rightly observed, altarpieces had to be moved frequently, and so could not be too heavy (which explains the choice of wood or pipe clay). Holy Sepulchre groups and pieces connected with architecture – such as vault plates, epitaphs and mantel friezes – were made of stone. Export products were often made of wood or pipe clay because they weighed less than stone and were easier to ship.

In the afternoon Tone Marie Olstad, senior curator of paintings at the Norwegian Institute for Cultural Heritage Research, talked about the so-called Leka Group, an ensemble of five Utrecht altarpieces that were transported from Utrecht to Norway at the beginning of the sixteenth century. She has been researching these retables since 1986, and in this presentation she discussed the usefulness of construction drawings. As part of her research, she took the exact measurements of both the statues and the altar frames. The scale drawings show the front and back as well as the cross-section of the retables, and provide a great deal of insight into the construction of altarpieces. 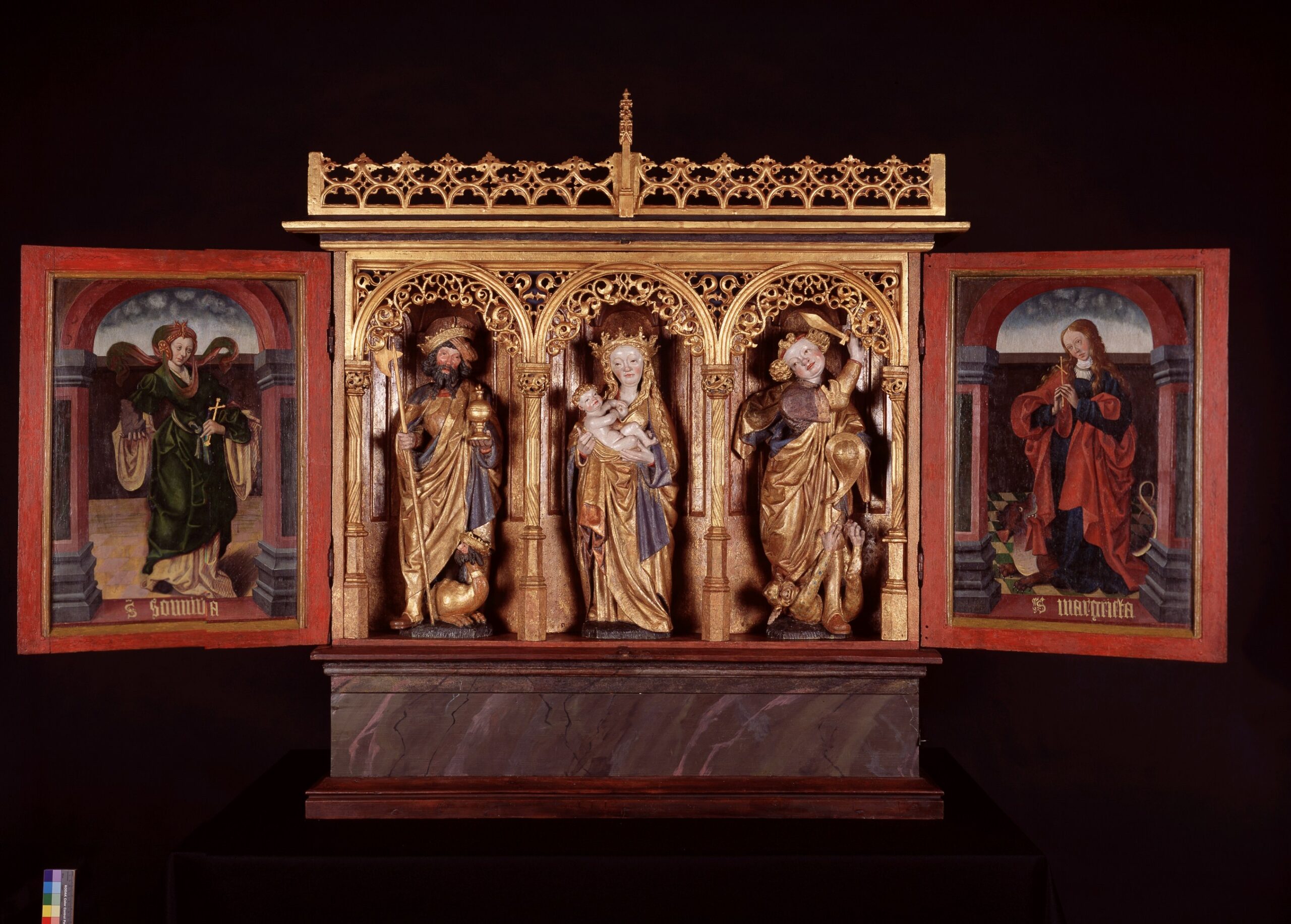 Henri Defoer, former director of the Museum Catharijneconvent, gave a talk titled “Name-dropping and Utrecht medieval sculpture” about the identification of masters with provisional names. Reinhard Karrenbrock’s identification of the Master of the Emmerik Saints as Raebe Lambert Luetszoon (see exh. cat. Middeleeuwse beelden uit Utrecht 1430–1530, Micha Leeflang and Kees van Schooten [eds.], Museum Catharijneconvent, Utrecht, and Ludion, Antwerp 2012) is not justified, according to Defoer. He thinks it highly unlikely that a sculptor active in Utrecht – which can be ascertained on the basis of the corbel displaying an angel bearing a coat of arms, ca. 1475, Utrecht, Ridderlijke Duitsche Orde (RDO), Balije van Utrecht, which was produced by the Master of the Emmerik Saints in Utrecht – the pre-eminent center of sculpture at that time, would choose to move to Emmerik. He thinks it more plausible that the statues were exported from Utrecht to Emmerik, and therefore argues in favor of retaining the name “Master of the Emmerik Saints.”

In the case of the Master of the Utrecht Female Head of Stone, who was active in Utrecht between 1500 and 1530, we have come closer to identifying this individual, thanks to the exhaustive archival research carried out by Jan Klinckaert, director of the Center for Religious Art and Culture in Flanders and Brussels. On the basis of his study of the period in which this master was active, he has come up with three names. The first, Hendrik Hendrikszoon Bontmaker, can be eliminated on the basis of his divergent style. Even though no work is known by the other two important sculptors then active in Utrecht – Jacob Eelgiszoon van Genderen and Claes Engbertszoon van Esbroeck, whose names were also gleaned from archival documents – it is in fact very likely that one of these two sculptors can be identified with the Master of the Utrecht Female Head of Stone. 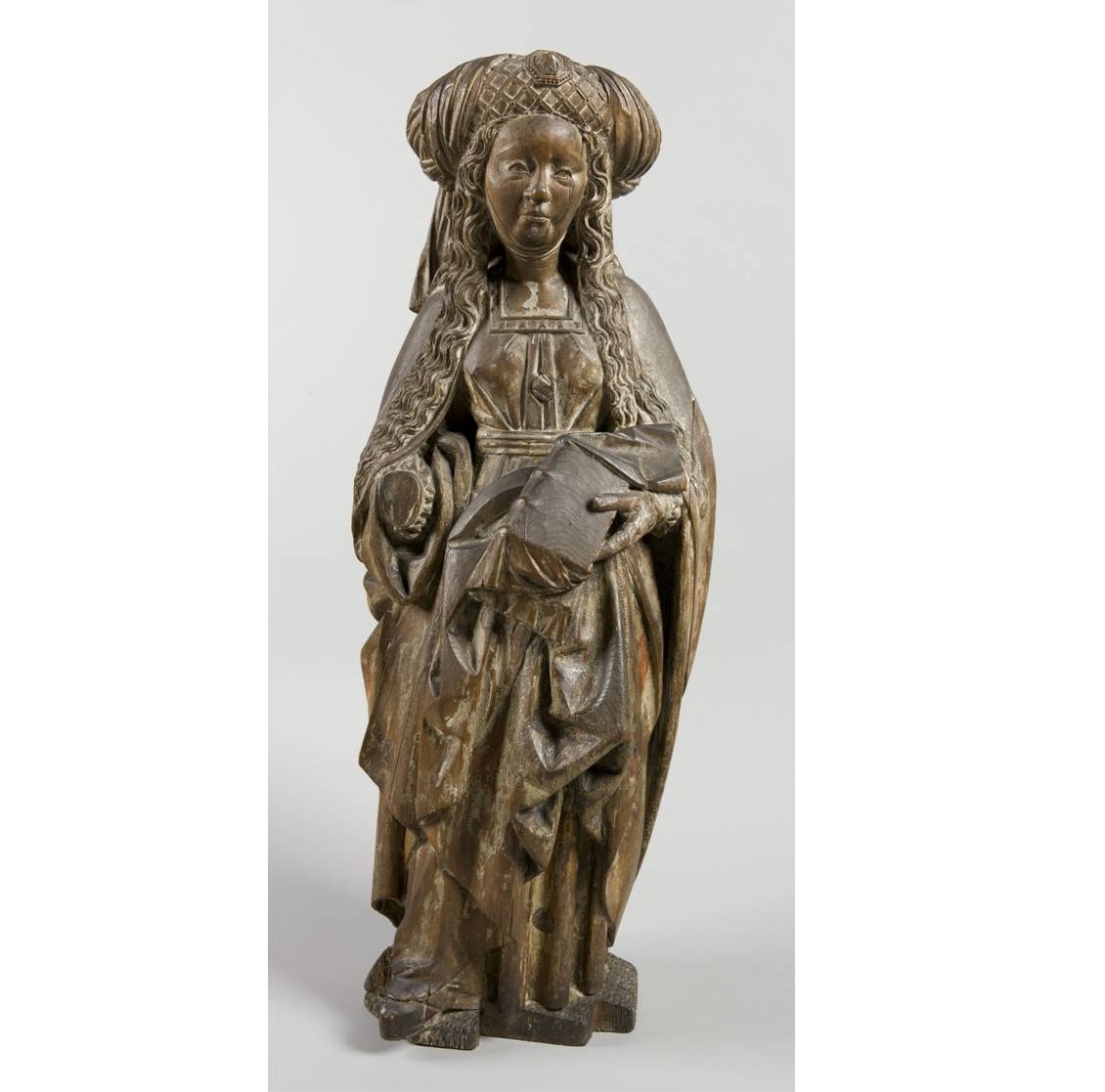 As Defoer indicated, the quality of the oeuvre attributed to the Master of the Utrecht Female Head of Stone is very diverse, which suggests the possibility that a number of workshops were working in a similar style. The Leka Altarpiece, the Saint Dorothea from Aachen and the Mary Magdalene from Münster all bear close stylistic resemblances, but seem to be by a hand other than that of the Master of the Utrecht Female Head (Utrecht, Museum Catharijneconvent, ABM bs604).

By contrast, Dagmar Preising’s recent discovery of a wooden statue of a female saint in the Polish town of Niepolomice, near Krakow, does seem to offer us an important link between the core piece in Utrecht and the pieces from Leka, Münster and Aachen. The Polish statue displays all the stylistic characteristics of the Master of the Utrecht Female Head of Stone, including the moon-shaped eyelids, the double chin, the bulging forehead and the long curly hair. Various technical aspects, however, place the statue closer to the Leka statues and the saints from Münster and Aachen. After all, these statues are made of wainscot and display the same traces of a workbench on the lower side. Preising’s find indicates that there is still a lot to be discovered, and we therefore hope that the exhibition and the symposium will prove to be a springboard for new discoveries and further research.