Of the many examples of fine silver documented as decorating the homes of the local aristocracy in Genoa, the Galleria Nazionale di Palazzo Spinola conserves the only large pieces still remaining in the city. They include a dish depicting The departure of Columbus from Palos by Matthias Meljin and the two vases by Gio Aelbosca, also depicting episodes from the life of Columbus. Both men were established Flemish silversmiths active in Genoa in the early 17th century.

In addition to the works of art, paintings and documents inherited from his father Agostino Pallavicino, Ansaldo Pallavicino, owner of the palace from 1650, also introduced the Columbus silverware he commissioned to the residence. Thanks to a number of portraits, we can follow the various stages of Agostino’s extraordinary public career, which ended with his election as doge in 1637. Two of these portraits are related to the diplomatic roles he played during his lifetime: the first, in 1621, as ambassador of the Republic to Pope Gregory XIV, the second as protector of the Bank of Saint George in 1625. Agostino commissioned Anthony van Dyck to paint both these likenesses, having observed his extraordinary ability as a portrait artist in the very year he arrived in Genoa. Unfortunately, the first of these works, the only one of the Genoese portraits signed by the artist, is no longer found in the palace; it was sold in the 19th century and is now in the J. Paul Getty Museum in Los Angeles. The second picture was cut up in the 17th century and all that remains is the section in which Van Dyck depicted Agostino’s son Ansaldo; the fate of the portion depicting the actual patron is unknown. 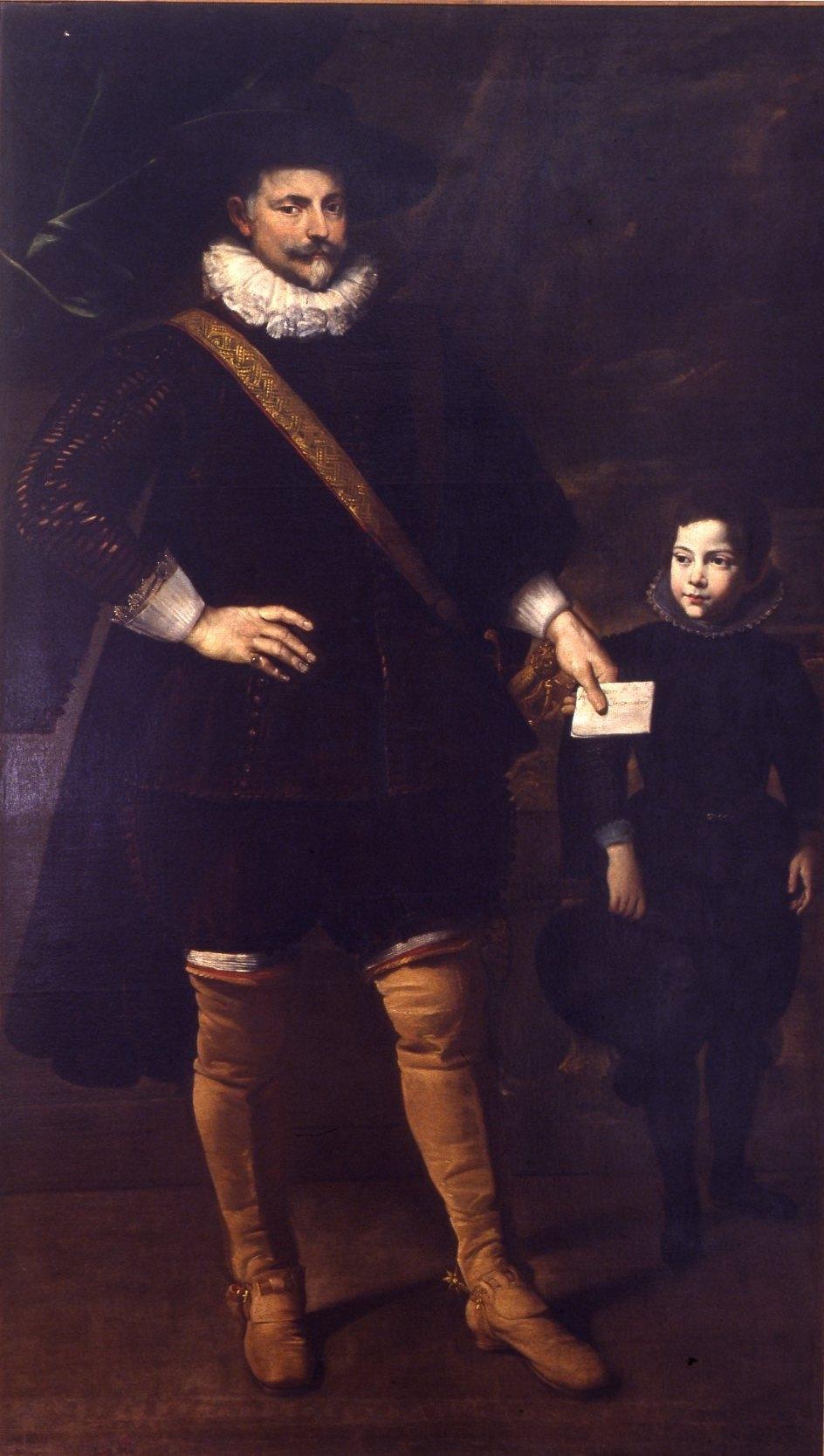 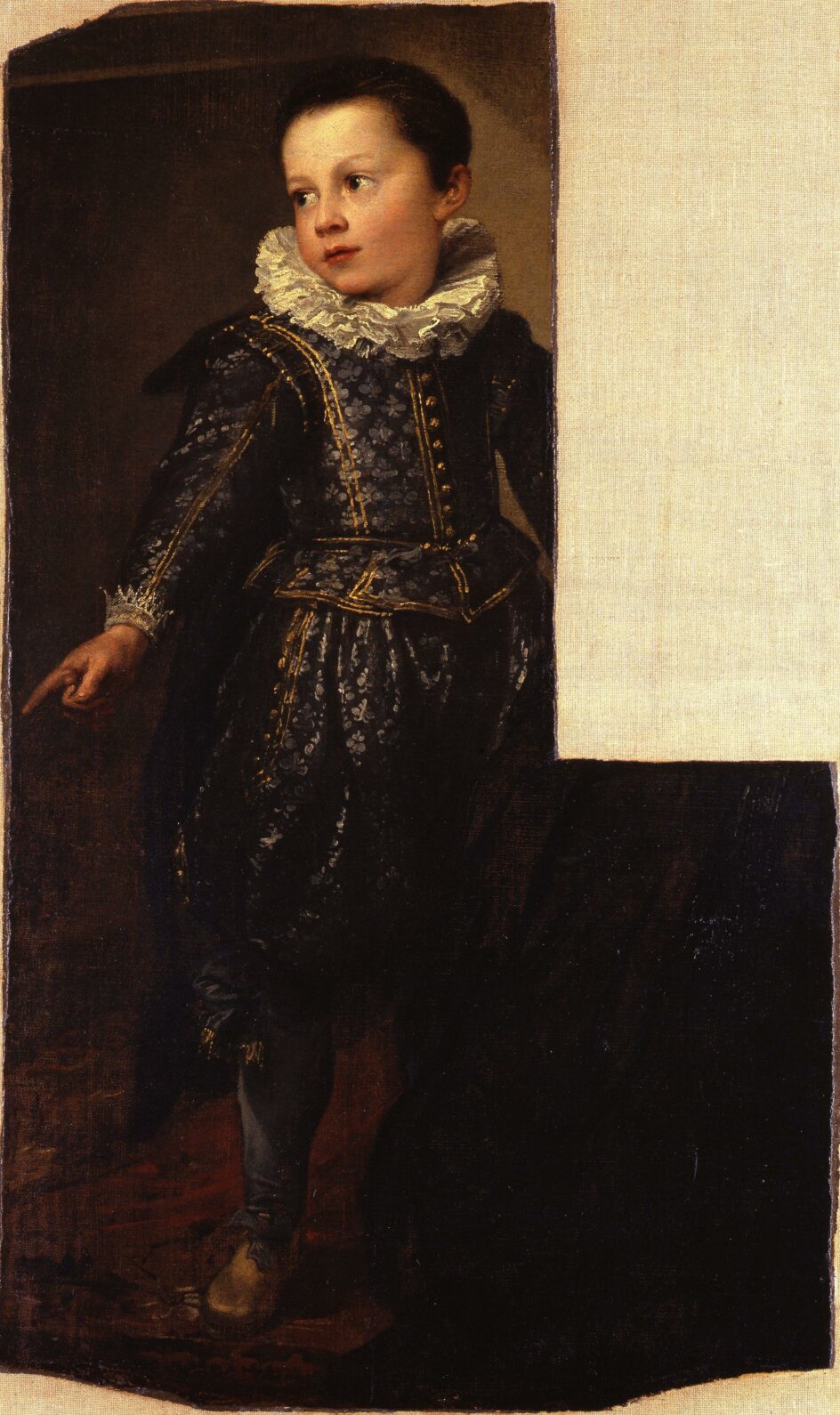 Agostino Pallavicino demonstrated that he was capable of thinking for himself when he commissioned work from a Flemish painter of Van Dyck’s level immediately upon his arrival in Genoa. The commission had its counterpart in a large order of silver during the same period, the years 1618 to 1625, not only from the most well established and esteemed traditional Genoese silversmiths, but above all from the city’s most revered Flemish artisans. All working citizens were subject to taxation, and the fortune and prosperity achieved by this colony of Northern European artists is indicated by the tax rolls of 1630, which record the payments made by each of them, divided into various business categories, including that of the aurifices. From the list of Latinized names, it is possible to identify Io. Baptista Endroch, Matthias Melijn, Gio Aelbosca Belga and Andreas Flamengus, who can be added to the names already documented in previous lists: Cornelius Flamengus, Emilio Brusch, Victorius Flandrinus, Christophorus Stamburger and Anastaxius (or Nastaxius ) Torrexengus.

The existence of a colony of Northern European silversmiths in the city was by no means something new. Indeed, they had been an established presence since the second half of the 16th century, as demonstrated by the names of those involved in the most demanding and prestigious creations of these years, including the monumental silver casket of the Corpus Domini, now housed in the Museo del Tesoro del Duomo di San Lorenzo, to which Thomas Opluten, Ranier Fochs and “Arrigus flamengus” contributed. 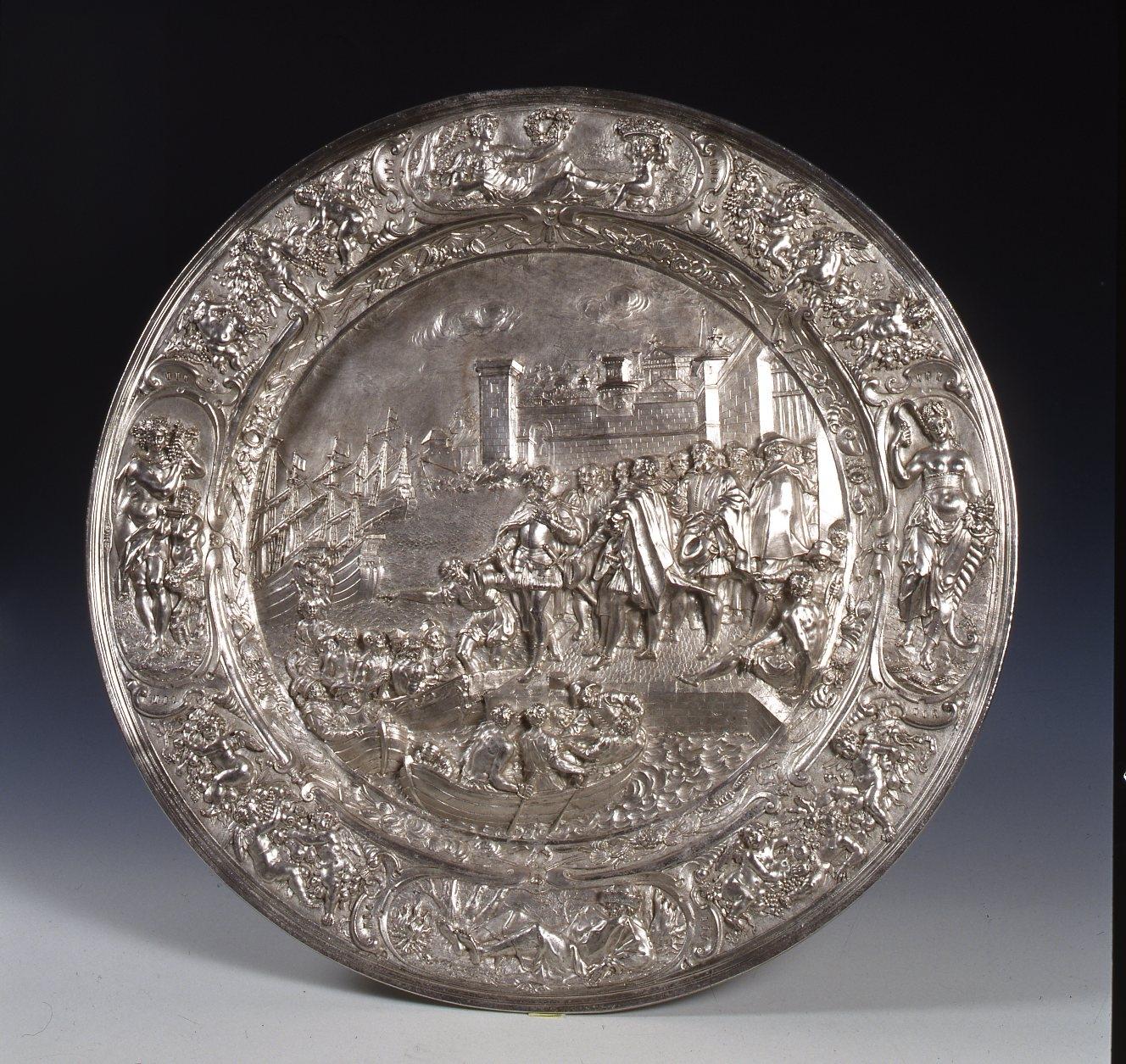 Matthias Melijn, Plate with The departure of Colombus from Palos in the centre and The Seasons on the rim Galleria Nazionale di Palazzo Spinola, Genoa 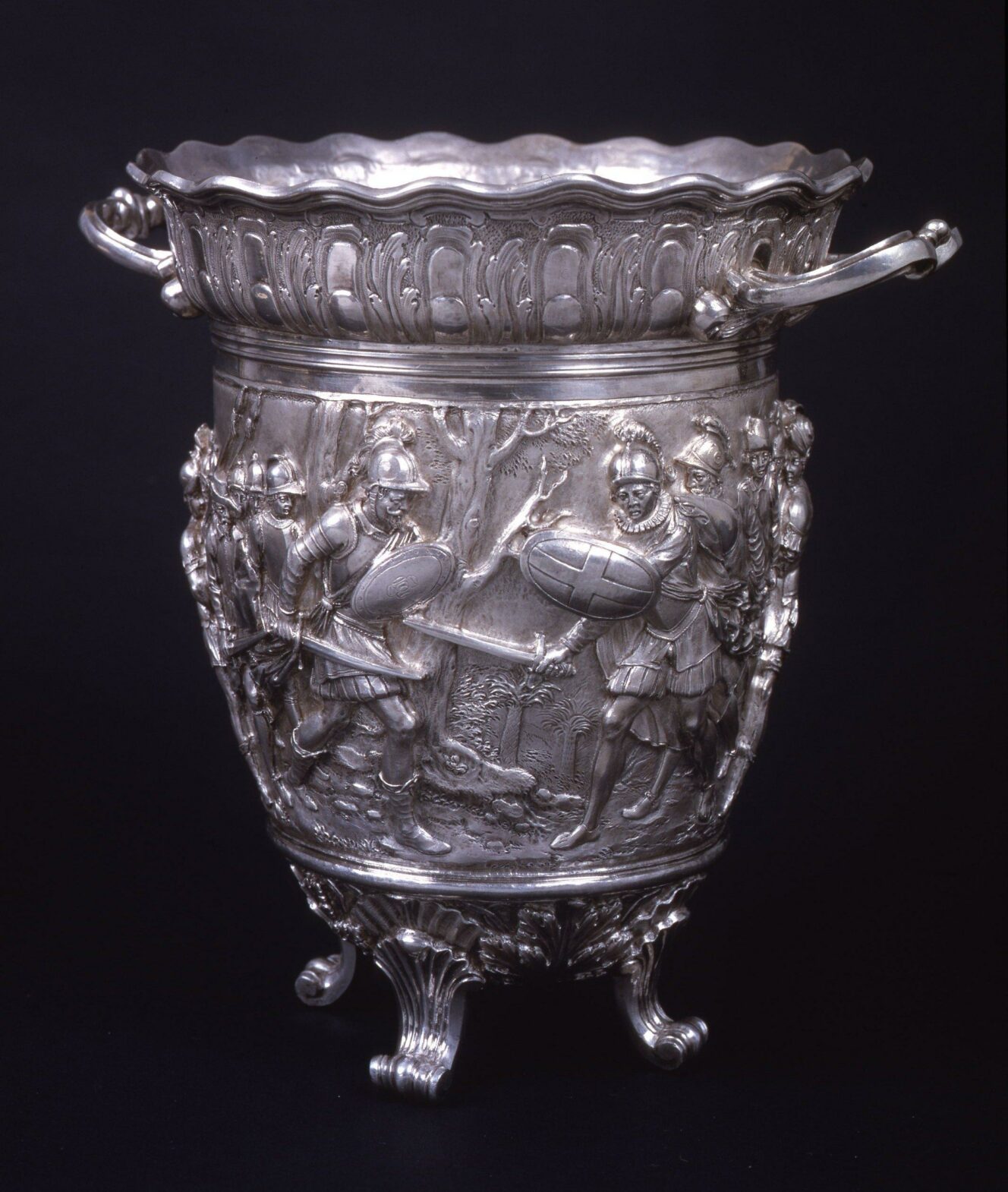 Agostino Pallavicino’s predilection for Flemish artists became evident in the 1630s, when he seems to have commissioned work from one Flemish craftsman in particular, Gio Aelbosca Belga. His first major known work is a basin and ewer dated 1621 and 1622, respectively, each depicting scenes from the Battle of the Po which are now on display in the Victoria & Albert Museum in London. Following this work, executed for the Grimaldi family, came those for Agostino Pallavicino, starting with the basin depicting The arrival of Columbus in America, paid for in 1627. In 1976, Hayward discovered the artist’s personal stamp and the date of 1626 on the piece when he saw it in a Parisian collection. Unfortunately, its current location is unknown and no photographs of it seem to exist 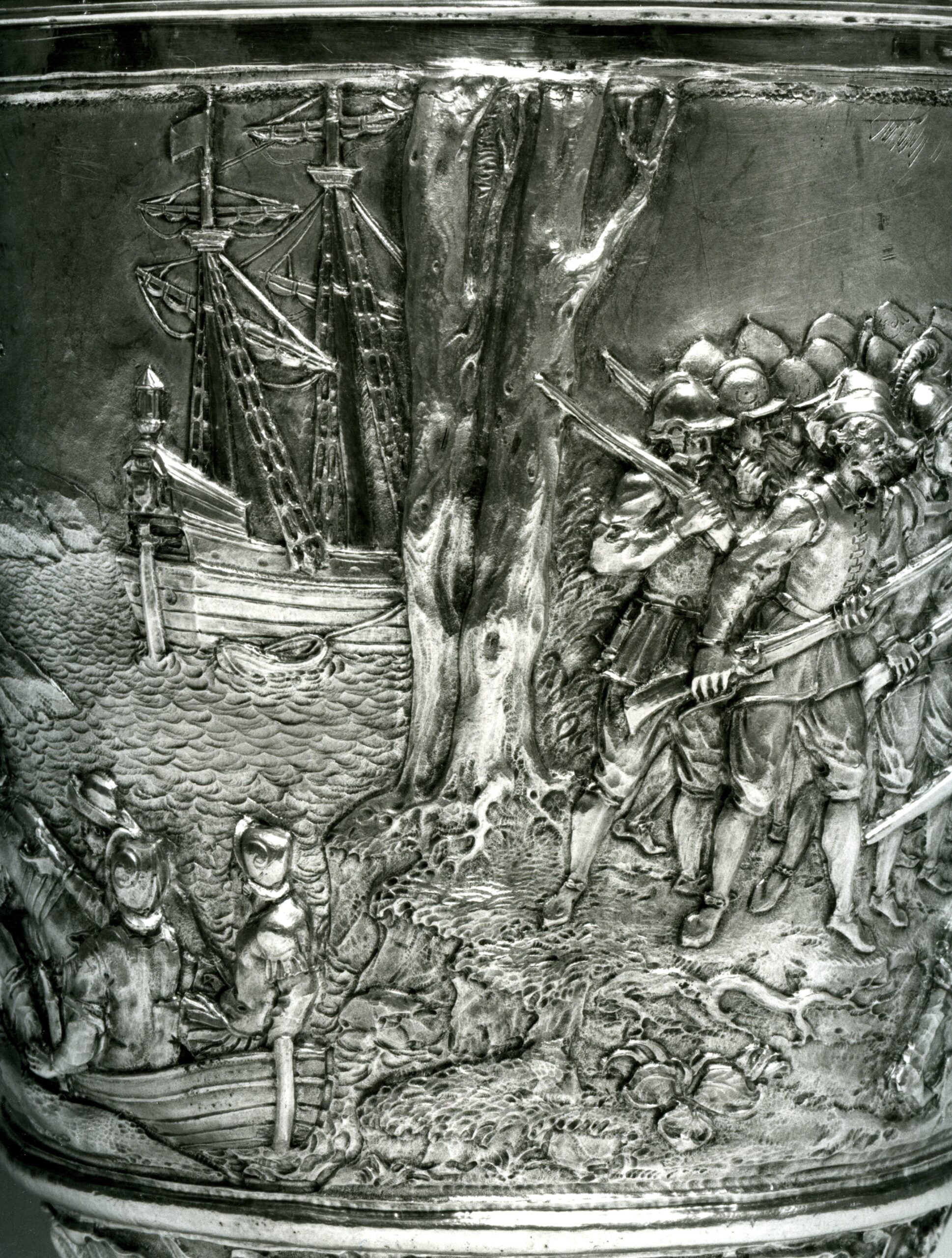 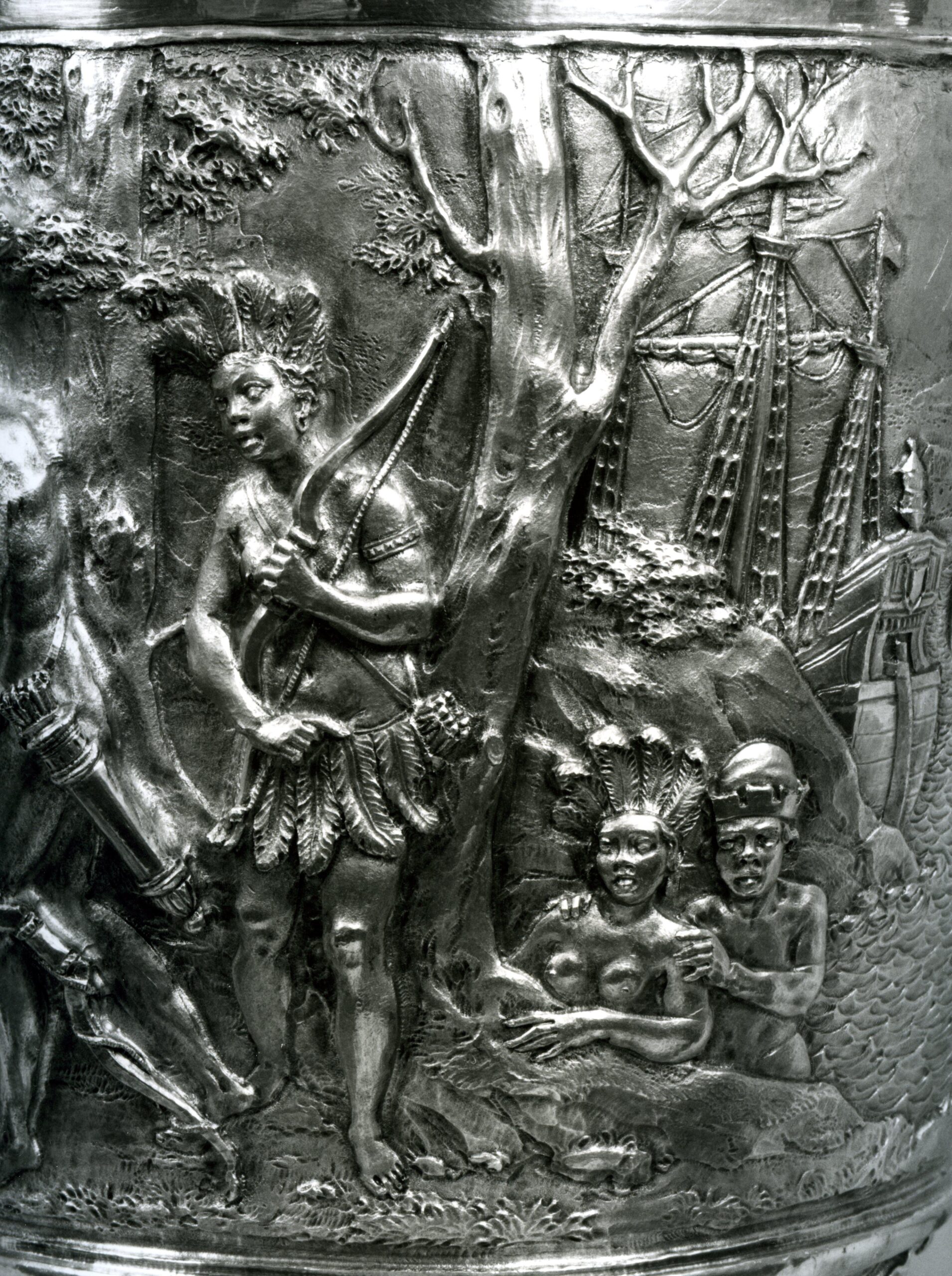 This same payment may also have covered the Columbus vases still in the Palazzo Spinola today. While the figurative band of one of the vases, the remaining part of the original ewers, depicts The natives paying homage to Columbus, the subject of the other vase is far more unusual. It shows the lesser episode of the quarrel between Columbus and Francisco de Porras that occurred during the fourth voyage to the Americas (1502-1504). A rare subject indeed, with the clash between the man from Genoa and the Spaniard used to express the patron’s commitment to the Republic and avocation of greater autonomy for the Republic from Spain, of which Pallavicino was a staunch supporter. His firm political convictions led to his election as doge, and it may well have been this high ducal office, and the need to decorate his apartments in the Ducal Palace, that generated another commission for Gio Aelbosco in 1638, this time for eight monumental candlesticks.

The fact that much of the Columbus silver collection at the Palazzo Spinola is by the same maker and features the same theme throughout, seems to bear witness to Pallavicino’s satisfaction with the Belgian artist Aelbosca. He also turned, however, to another Flemish artist, Matthias Meljin, in 1630, who created a basin depicting The departure of Columbus from Palos. Although it does not bear a signature or personal stamp, the basin is undoubtedly the work of Meljin, as evidenced by its close stylistic resemblance to his signed pieces. This attribution is supported by close comparison with a dish depicting The rape of the Sabines, now housed in the Museo Catedralicio in Toledo; it is signed matia melin f. belgia and dated 1627 and is analogous in terms of the style of the main scene, the decorative style, and the technique. 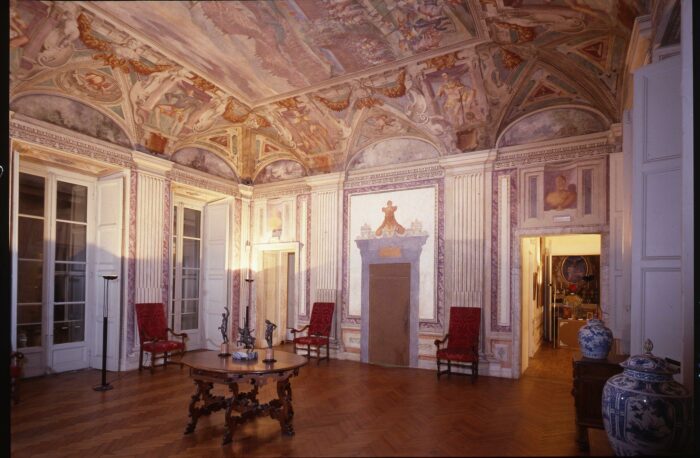 The silver collection, as reconstructed here, appears united by its evident search for subjects particularly effective at emphasizing Pallavicino’s commitment to the autonomy of the Republic. No great care is taken to conceal the anti-Spanish references, features that clearly demonstrate the patron’s desire for subjects with pertinent content, not simply those taken from the international decorative repertoire. In his predilection for Flemish artists, Agostino seems to have been led by a marked appreciation of their exceptional technical ability, but he evidently made a deliberate decision not to ask them to employ their talents in the creation of subjects to which they were more accustomed, such as the oft-repeated theme of the Rape of Europa or the various mythological subjects primarily linked to Neptune and Amphitrite. 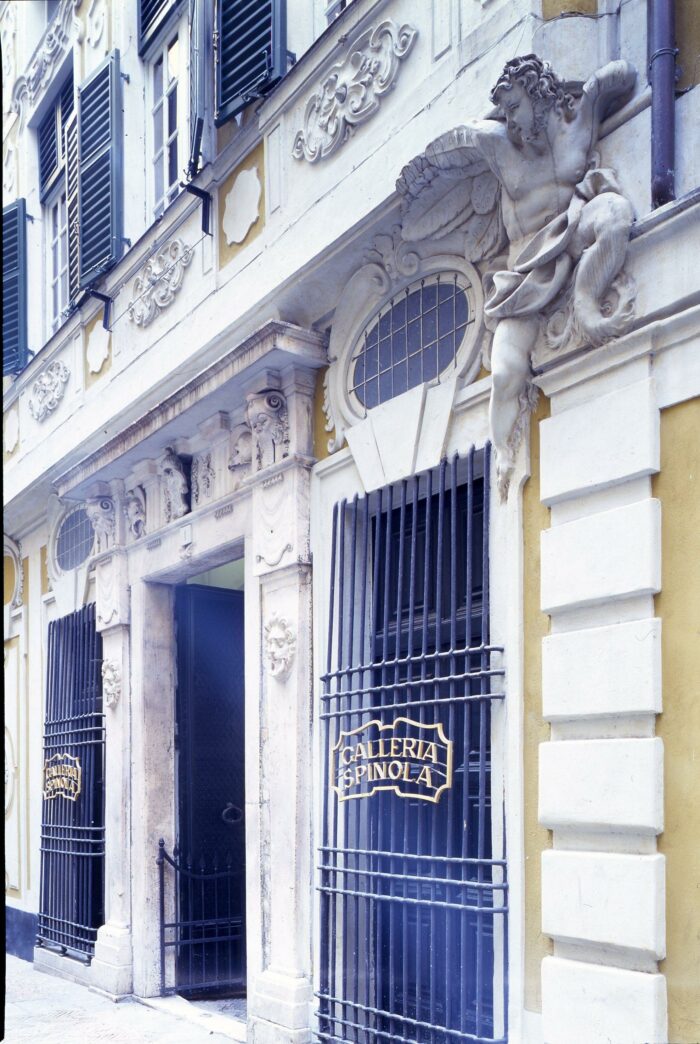 The interest in historical themes and subjects linked to the exaltation of the family, such as that which characterizes the commissions for the great fresco cycles in Genoese residences, also seems to establish a “specific Genoese style” in the fine silver.

The complexity of this “specific Genoese style” is particularly evident in the Palazzo Spinola, where Pallavicino’s pieces of Flemish silver are displayed in rooms which have remained much as they were in the 17th century. This enables us to observe them in a coherent residential context, in which the frescoes, paintings and furniture combine to express the life of the aristocracy in the Republic of Genoa at a time of great cultural splendor and economic power.