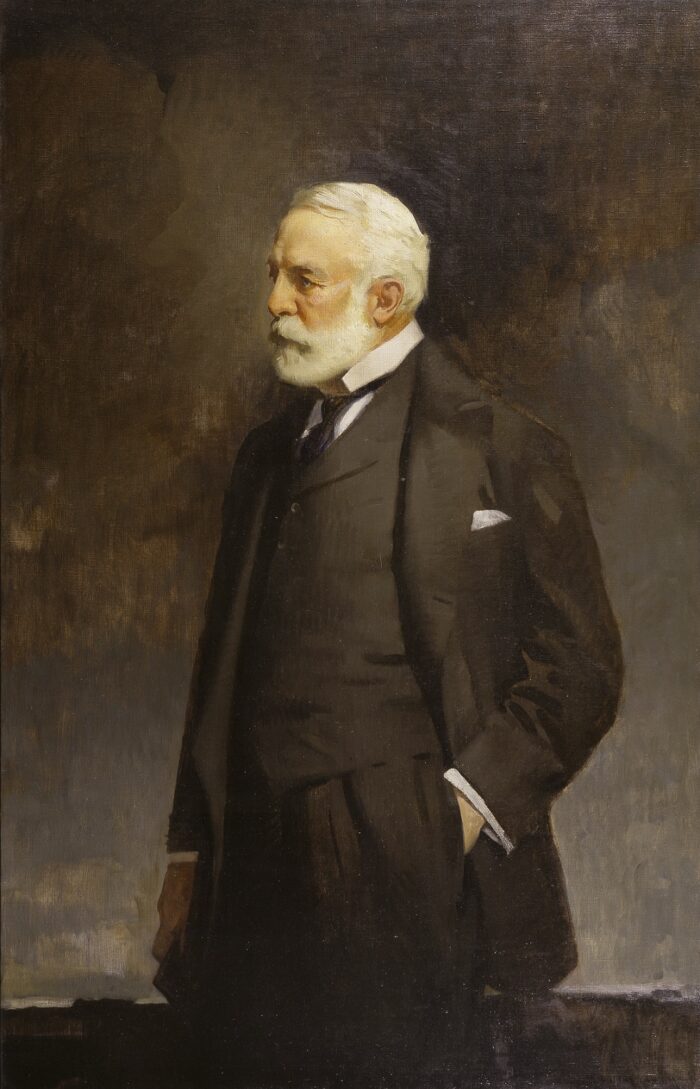 Henry Clay Frick (1849–1919; fig. 1), a pioneer in the Pittsburgh coke and steel industries and a successful financier, amassed one of the most magnificent collections of Old Master paintings of America’s Gilded Age. Born in rural Pennsylvania, he grew up under modest circumstances and had only a brief formal education. At the age of twenty-one, Frick formed a company which used beehive ovens to turn coal into coke, a fuel in high demand by Pittsburgh’s rapidly expanding steel industry. A millionaire by the age of thirty, Frick soon came to dominate the coke and steel business.

Little is known about Frick’s earliest picture acquisitions. His first recorded purchase took place in 1881, when he bought Landscape with River by George Hetzel, a landscape painter from Pittsburgh. It is now part of the collection of Pittsburgh’s Frick Art & Historical Center, where many of Frick’s early purchases remain. In the mid-1880s, when Frick and his family were well established at Clayton, their Pittsburgh residence, he started collecting on a larger scale. Like many American collectors of his day, Frick had a preference for contemporary French artists, such as Bouguereau and Cazin, and for Barbizon landscapes. Later, as his artistic tastes gradually became more sophisticated, he weeded out many of these early acquisitions, often returning them to dealers in exchange for other works or for credits towards subsequent purchases.

In 1896, Frick bought his first Old Master, Still Life with Fruit, by the minor eighteenth-century Dutch painter Jan van Os (Pittsburgh, Frick Art & Historical Center). Frick’s first important Old Master, Portrait of a Young Artist, then given to Rembrandt, followed three years later. By this time, the taste for the Dutch School was well established in the United States. Without doubt, Rembrandt was its most sought-after master, as he had been for years and would remain for decades to come. Collectors on both sides of the Atlantic competed eagerly for Rembrandt’s works; Americans, with their vast new fortunes, often had the upper hand in the market. Portrait of a Young Artist, now attributed to an unknown Rembrandt pupil or follower, was the first of six paintings Frick purchased under the master’s name. It marked a turning point in his collecting career, as his interest shifted to Old Masters.

Over the next years, as Frick’s ambitions for his collection grew, he added more seventeenth-century Dutch paintings. Among these were such works as Philips Wouwermans’s The Cavalry Camp; Aelbert Cuyp’s Cows and Herdsman by a River—the first of three Cuyps; and Meindert Hobbema’s Village among Trees—the first of two Hobbemas. A remarkable early acquisition was Johannes Vermeer’s Girl Interrupted at Her Music of 1658–59, which had only recently come to light in England. Vermeer was still little known in America at the time, and Girl Interrupted at Her Music was only the fourth authentic Vermeer to cross the Atlantic. It was also the first of three Vermeers to enter Frick’s collection.

In the fall of 1905, the Frick family left Pittsburgh and started renting the former home of William H. Vanderbilt at 640 Fifth Avenue in New York. A palatial residence, it boasted an impressive picture gallery suitable for a growing art collection. The Fricks lived at the Vanderbilt mansion until 1914, and it was during his decade there that Frick purchased many of his masterpieces. About this time, the ever-worsening economic circumstances of Europe’s aristocracy played into the hands of ambitious American collectors such as Frick: a veritable exodus of art works had started, and the international market was overflowing with paintings, many excellent Dutch and Flemish pieces among them. 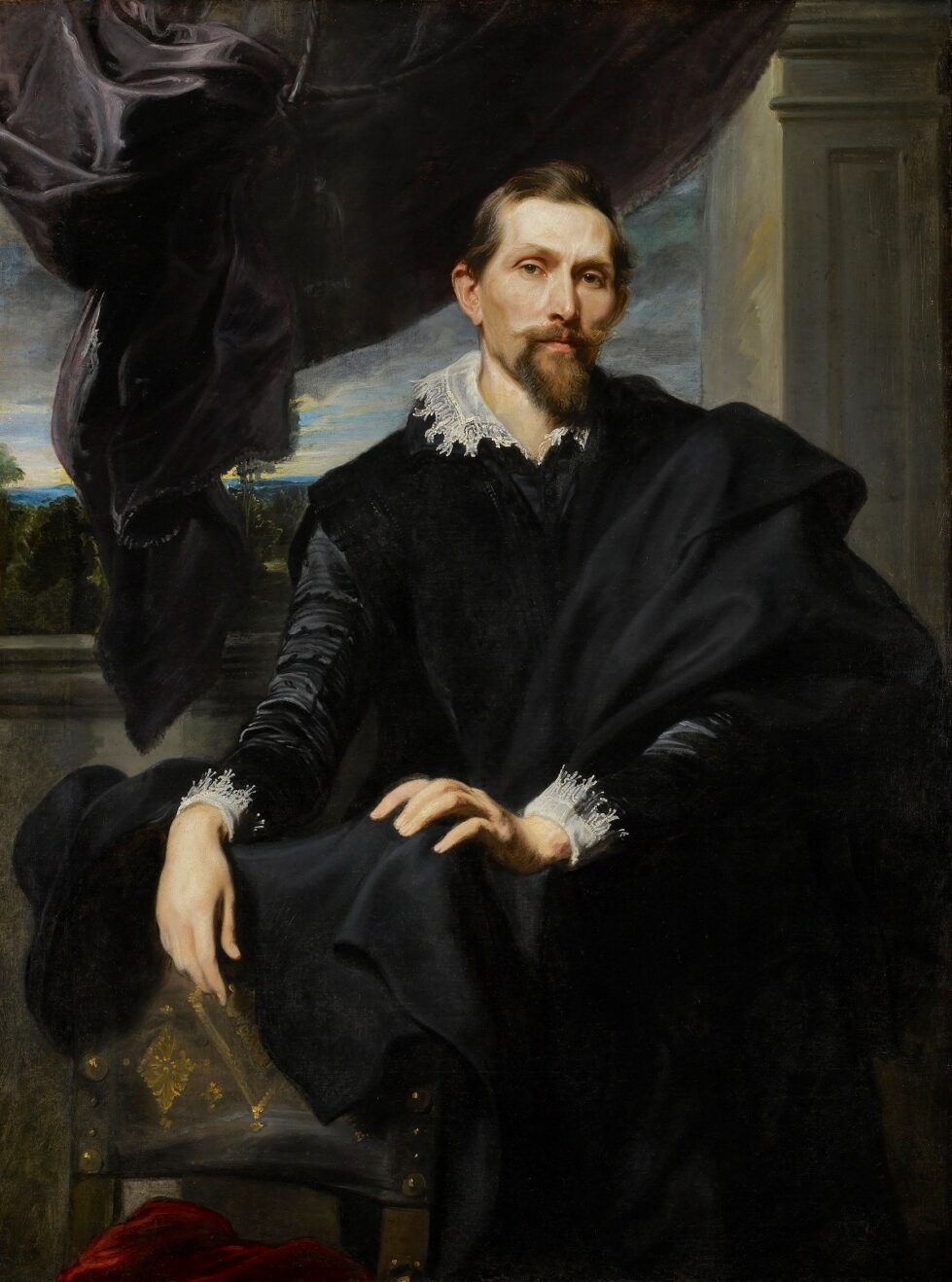 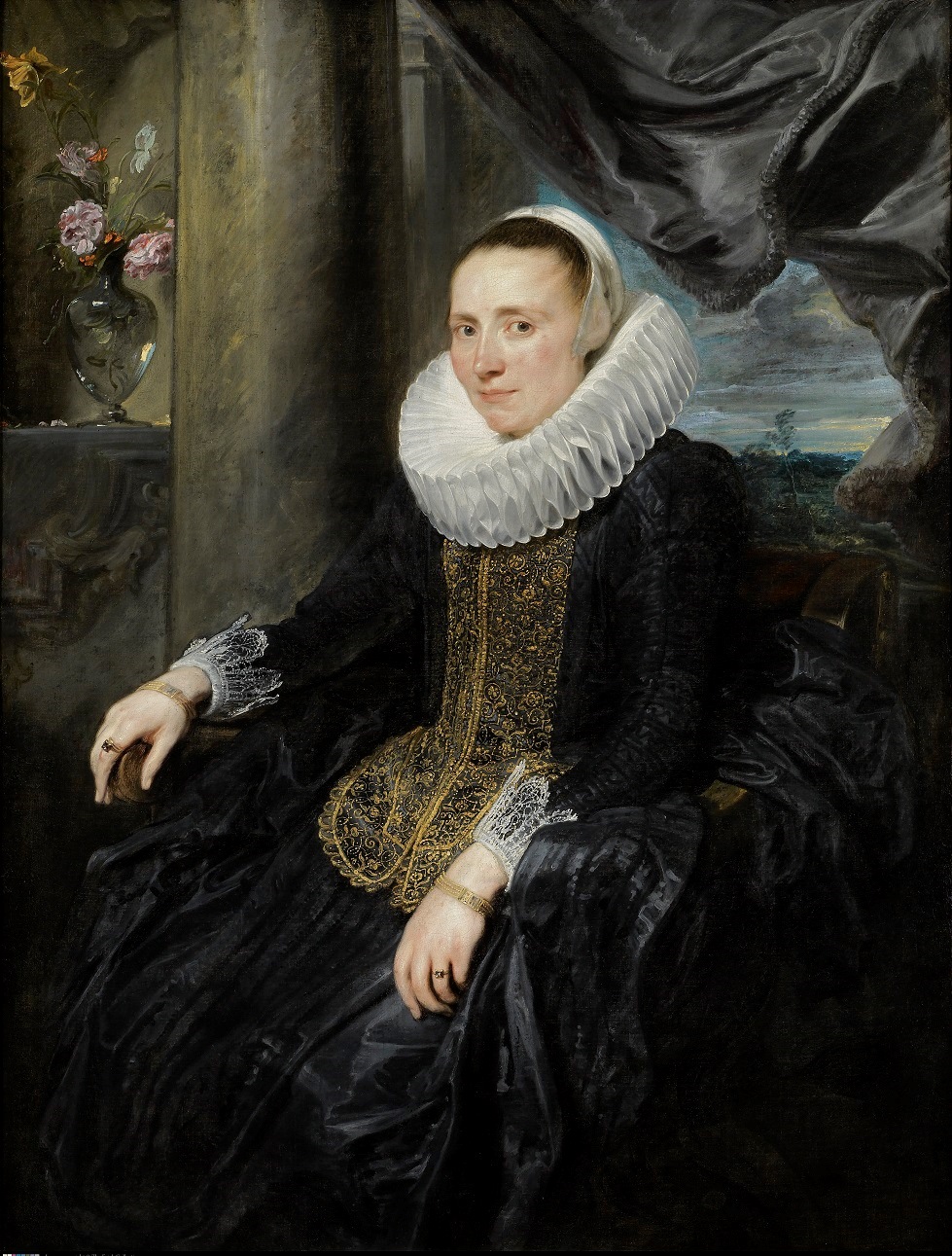 In 1905, Frick bought the first of his eight paintings—all portraits—by Anthony van Dyck, Ottaviano Canevari of 1627, formerly in the celebrated Cattaneo collection, Genoa. Van Dyck was by far the most beloved Flemish master in America, where his portraits gained particular praise. (By contrast, Americans had little appreciation for Van Dyck’s master, Rubens.) Soon other Van Dycks entered Frick’s collection, among these, in 1909, a fine early portrait pair reunited for the first time since the French Revolution: the portrait of Frans Snyders (fig. 2), painter of animals and still lifes, from the collection of the Earl of Carlisle, and its pendant, the portrait of Margareta de Vos (fig. 3), from the collection of the Earl of Warwick.

Frick also continued to add Dutch works to his collection: for example, a second Cuyp (Dordrecht: Sunrise of c. 1650); a Salomon van Ruysdael (River Scene: Men Dragging a Net of c. 1667); and the first of his four works by Frans Hals (Portrait of a Painter of the early 1650s, long thought to be a self-portrait). A second Rembrandt, the Self-Portrait of 1658 (fig. 4), followed in 1906. Frick paid a steep $225,000 for the latter painting, which, like so many of his Old Masters, came with a prestigious British provenance, the Ilchester collection. Painted two years after Rembrandt’s bankruptcy, the picture was (and still is) generally considered one of his most extraordinary self-portraits. A third Rembrandt, The Polish Rider—famously discovered by Abraham Bredius at a remote Galician castle in 1897—followed in 1910. A second Vermeer, the splendid Officer and a Laughing Girl (fig. 5), came to the collection in 1911. 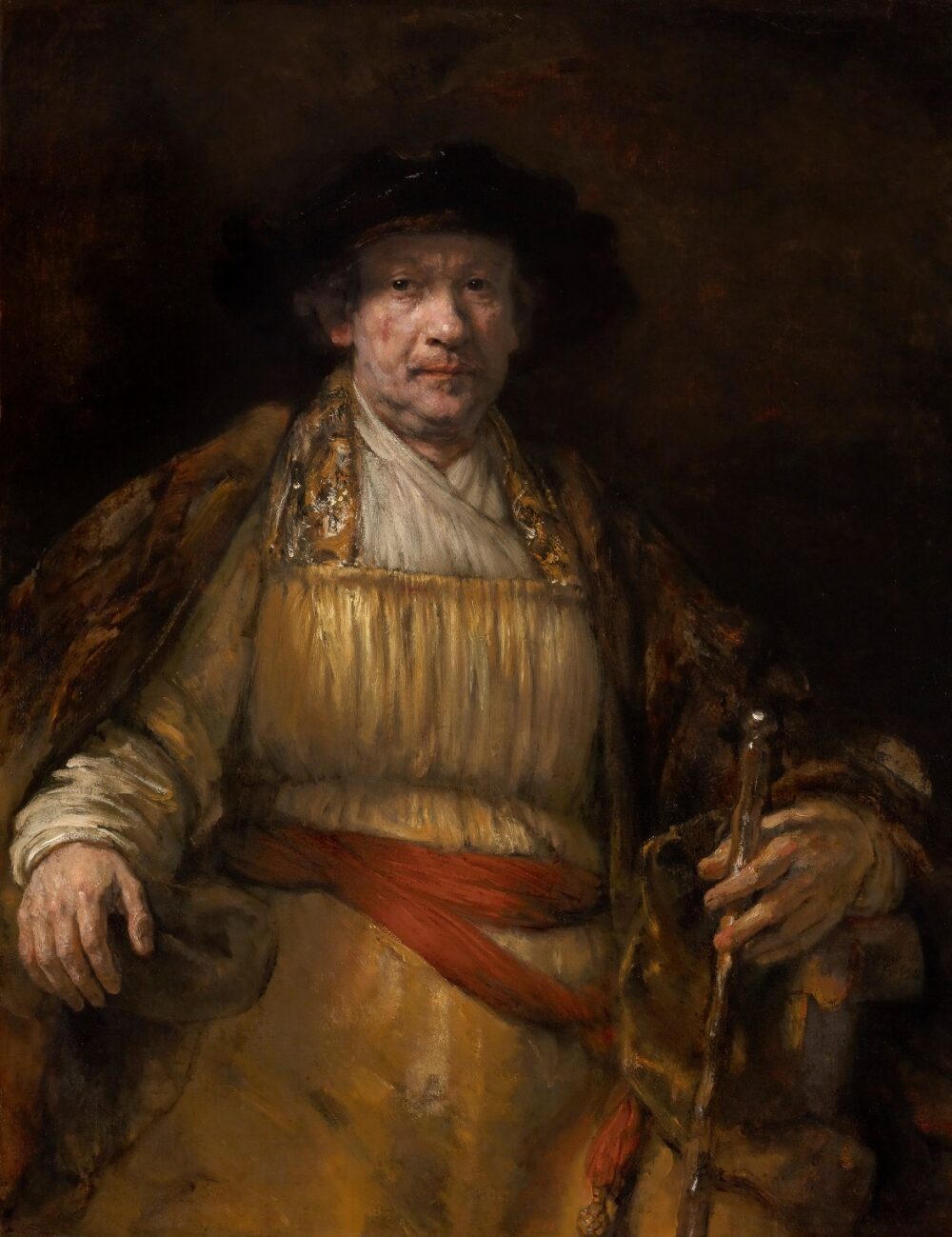 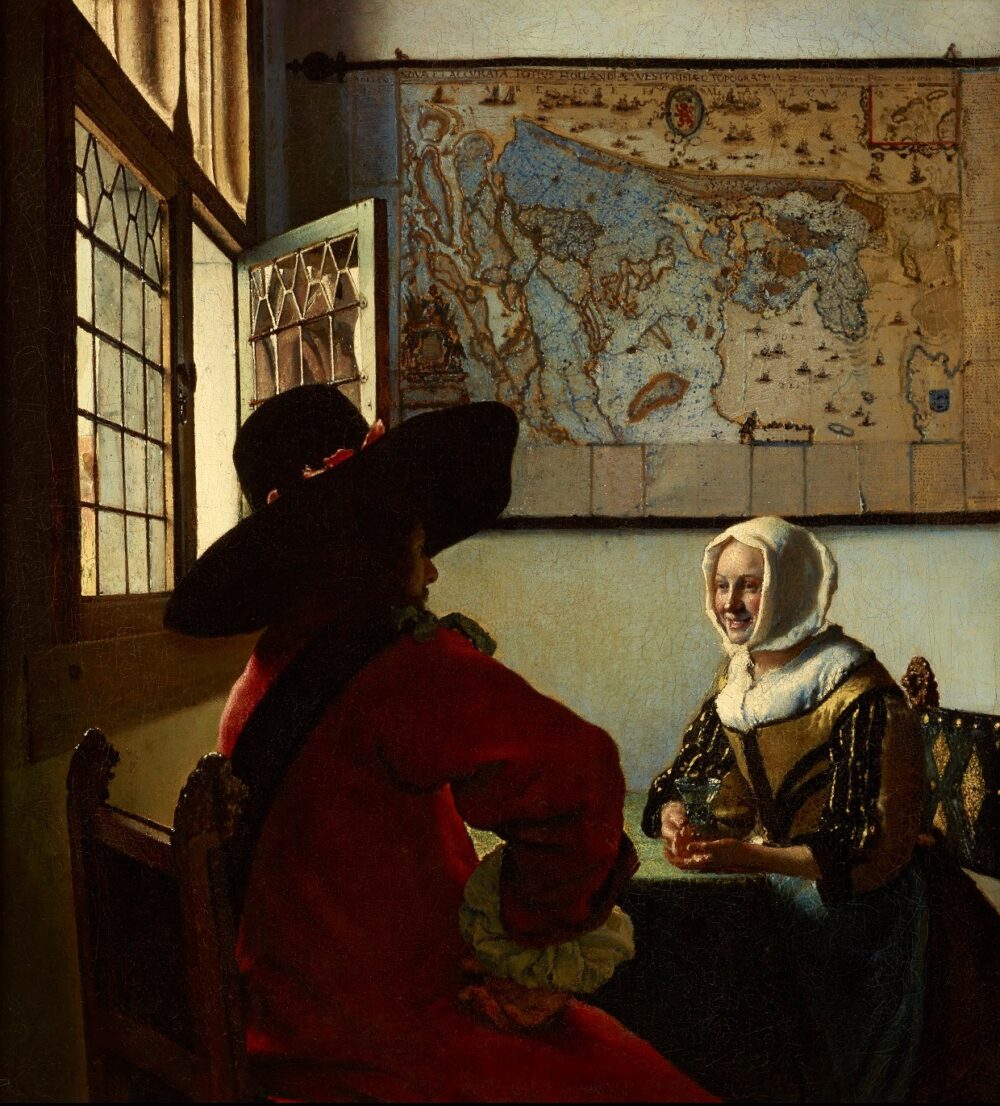 In 1914, Frick and his family moved into their newly built home on Fifth Avenue and East 70th Street (fig. 6). In the later 1910s, as the art market changed due to the outbreak of the First World War, Frick purchased fewer paintings. The last picture he bought under Rembrandt’s name, Old Woman with a Book, in 1916, was also his least successful Rembrandt purchase. It is now given to Rembrandt’s student Carel van der Pluym. In the summer of 1919, Frick made his final purchase, when he bought his third Vermeer, the late Mistress and Maid. 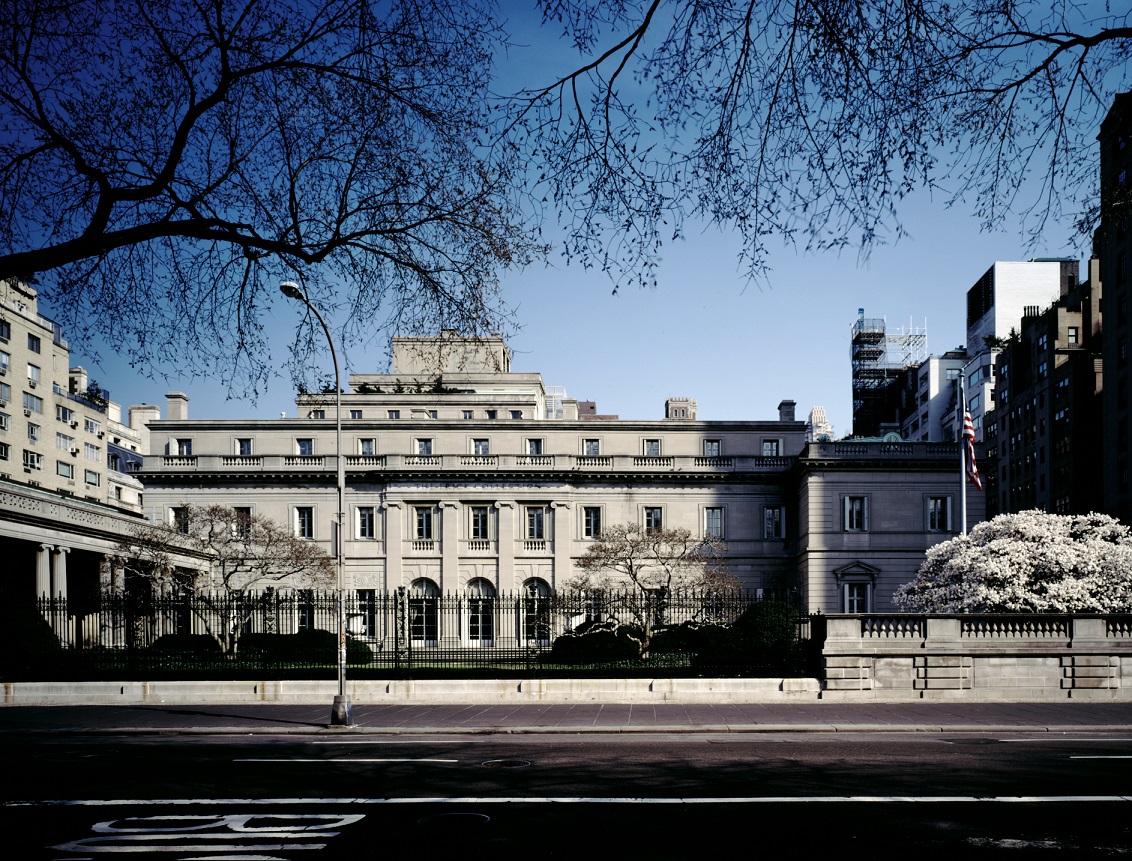 Frick died unexpectedly in December 1919. In his will, he stipulated that his New York residence—subject to occupancy by Mrs. Frick during her lifetime— together with the furnishings and the most outstanding of his many works of art should become a public gallery “which shall encourage and develop the study of the fine arts and which shall promote the general knowledge of kindred subjects among the public at large.” Frick’s bequest included sculpture, drawings and prints, and decorative arts. Chief among his grand gift, however, were 131 paintings, including not only his Dutch and Flemish pictures, but also an impressive number of British portraits by artists such as Gainsborough, Romney and Reynolds, as well as such masterpieces as Giovanni Bellini’s St. Francis in the Desert, Holbein’s Sir Thomas More, and Velázquez’s King Philip IV of Spain, to name a few of Frick’s own favorites. In addition, in his will, Frick provided a generous endowment of $15 million to be used for the maintenance of the museum and for improvements and additions.

Mrs. Frick continued to live at the residence until her death in 1931. At that time, the building was extensively renovated; it opened to the public as The Frick Collection in December 1935. Many works of art have since been added, among them several Dutch and Flemish paintings. Only the most notable ones can be mentioned here: Rembrandt’s superb Nicolaes Ruts, which entered the collection in 1943, and Virgin and Child, with Saints and Donor, acquired in 1954, as by Jan van Eyck, and now attributed to the master and his workshop.

Today, The Frick Collection continues to evoke the splendor of America’s Gilded Age, and its assembly of masterpieces testifies to Henry Clay Frick’s extraordinary vision as an art collector. Many of the Dutch and Flemish paintings are on view in the museum’s West Gallery, where some of them have been for more than a century (fig. 7). 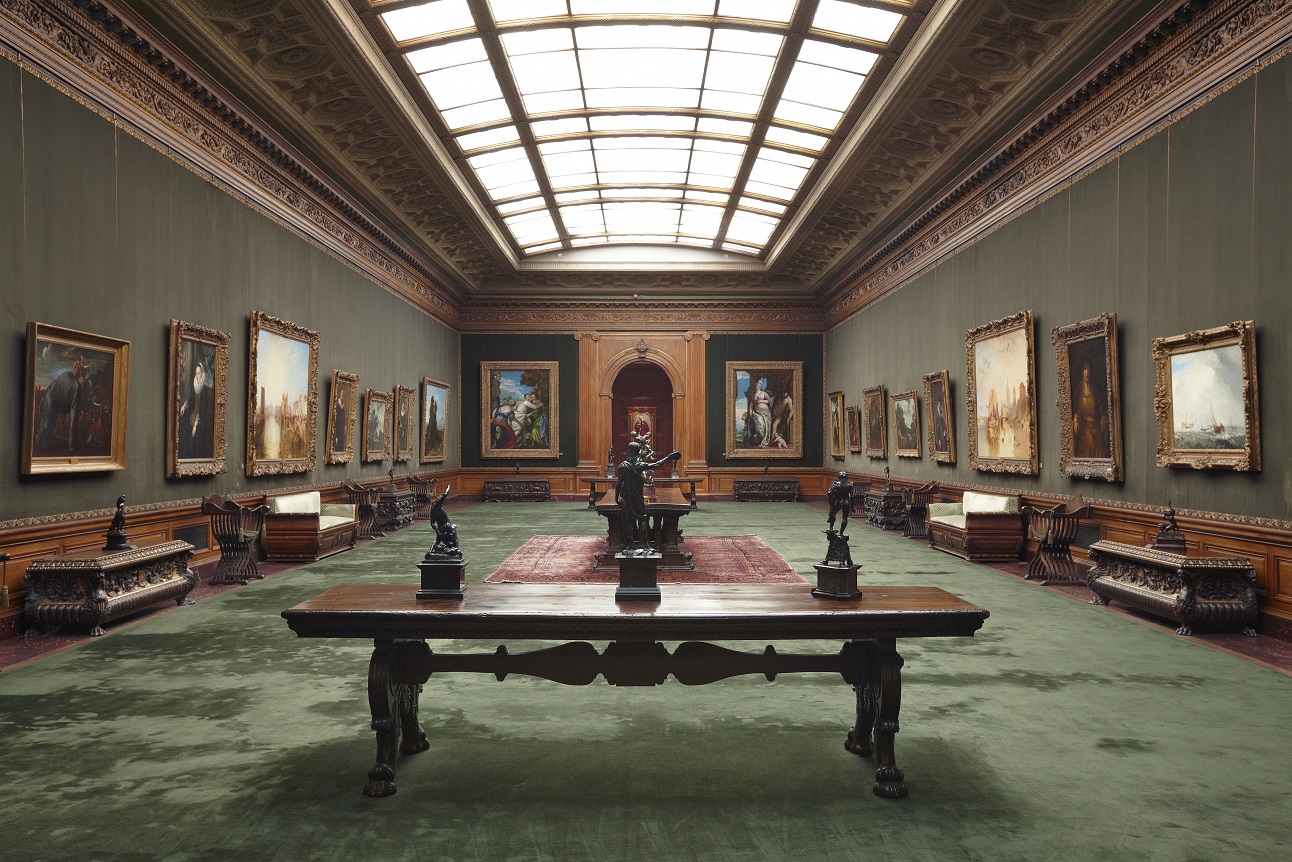 Esmée Quodbach is Assistant Director at the Center for the History of Collecting, Frick Collection, New York, USA. She has been a member of CODART since 2007.