This article was originally published in the CODART eZine, no. 3 Autumn 2013

As a professor of art history at the Universidad de Buenos Aires, I teach a course on sixteenth to eighteenth-century European art. Like most of the professors, I teach my classes with the aid of slides and other analogue reproductions of works of art. The university does not have an art collection that would be useful for our teaching activities. The most relevant repository for my classes is the Museo Nacional de Bellas Artes, whose collection of European art forms an important part of the exhibits. This collection has some significant highlights but, as is only to be expected, there are a lot of gaps among the oeuvres when one surveys the overall development of European art. Even when there are works that are of use for my course, there is always the need to use reproductions and other analogue aids in our classes and lectures, and for the students this results in a lack of contact with real works of art.

Nevertheless, it has recently been possible to introduce a way of focusing on the study of a genuine work of art. Certain paintings, prints or drawings are taken into the classroom to be examined, analyzed and studied by the students, who then produce an attribution as if they were working on a catalogue raisonné entry. In 1999, I brought them a drawing by Jan de Bisschop (1628-71), The Aurelian Walls and the Pyramid of Cestius, Rome (fig. 1), and asked them to study it and suggest the artist’s name. It was then, while doing the necessary research, mostly in rather poor local libraries but also on the internet, that the students happened to discover CODART, a new institution that they felt might be able help them in their work. They contacted, Gary Schwartz, who was the director at the time, and mentioned my name as a prospective member of the institution. They wanted me to become part of this group of scholars devoted to Dutch and Flemish art. As a result, I joined CODART in 2000 as an associate member (since the Museo Nacional de Bellas Artes does not list curators as a staff category). I had already published the catalogue of Dutch and Flemish paintings in the museum’s collection,1 and to a certain extent I was able to provide references to Dutch and Flemish works of art elsewhere in the country. 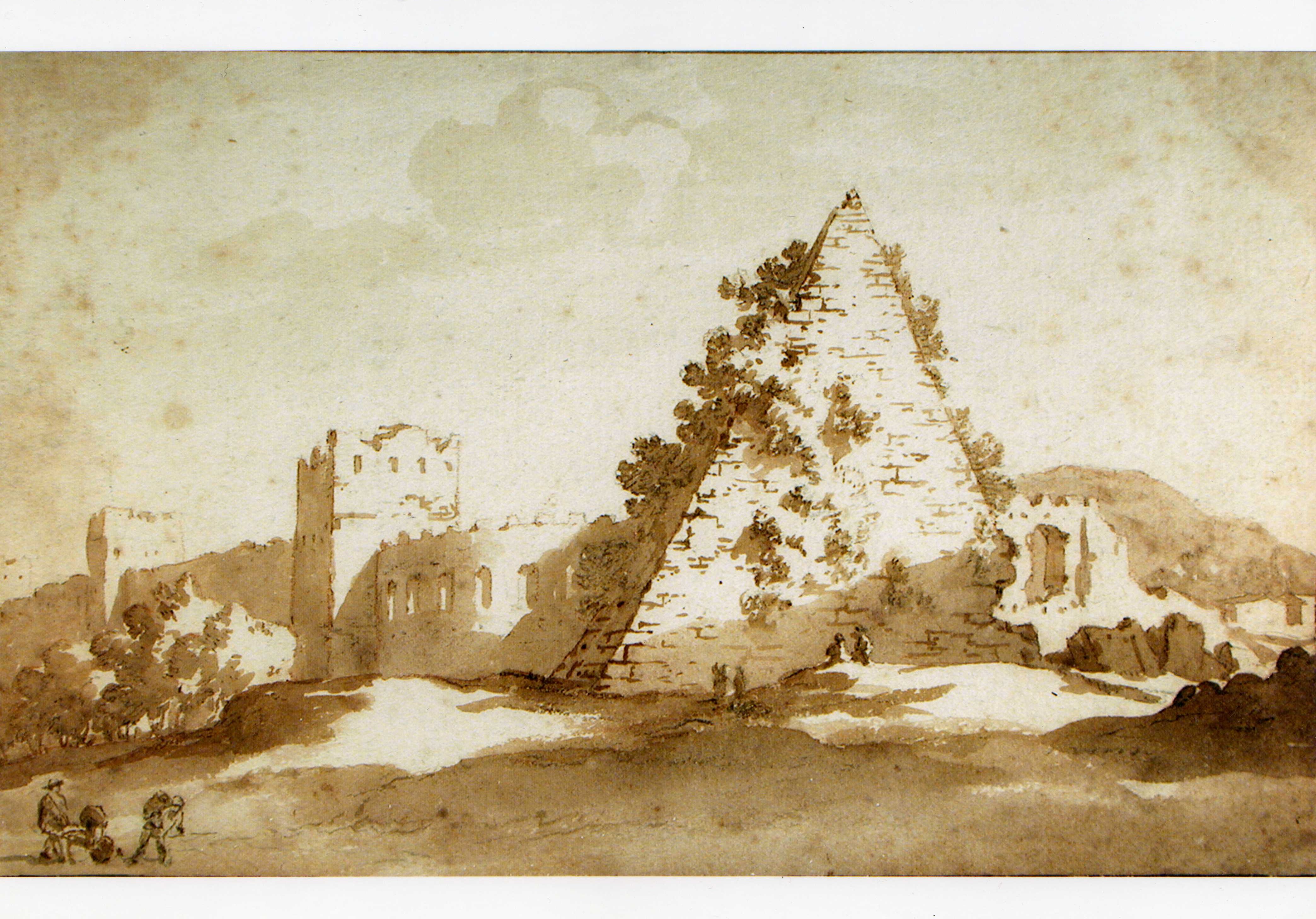 Located at the tip of the American continent, Argentina is far away from the world of art collecting and dealing. Having been part of the Spanish empire, it declared its independence as in 1810, but political and economic troubles prevented the young nation’s normal development until 1880, when peaceful times permitted a better organization of social and cultural life. It was only in the closing years of the nineteenth century that cultural and artistic institutions were founded, among them El Ateneo (The Atheneum) and the Museo Nacional de Bellas Artes, which opened in 1896. Its holdings include the most important group of Dutch and Flemish art in the country today. It is mainly made up of donations and bequests from prominent private citizens, but there are also acquisitions made by its founder and first director, Eduardo Schiaffino, during his visits to Europe. The collection consists of around 80 paintings from before the eighteenth century as well as works by Dutch and Belgian artists from the nineteenth and twentieth centuries. 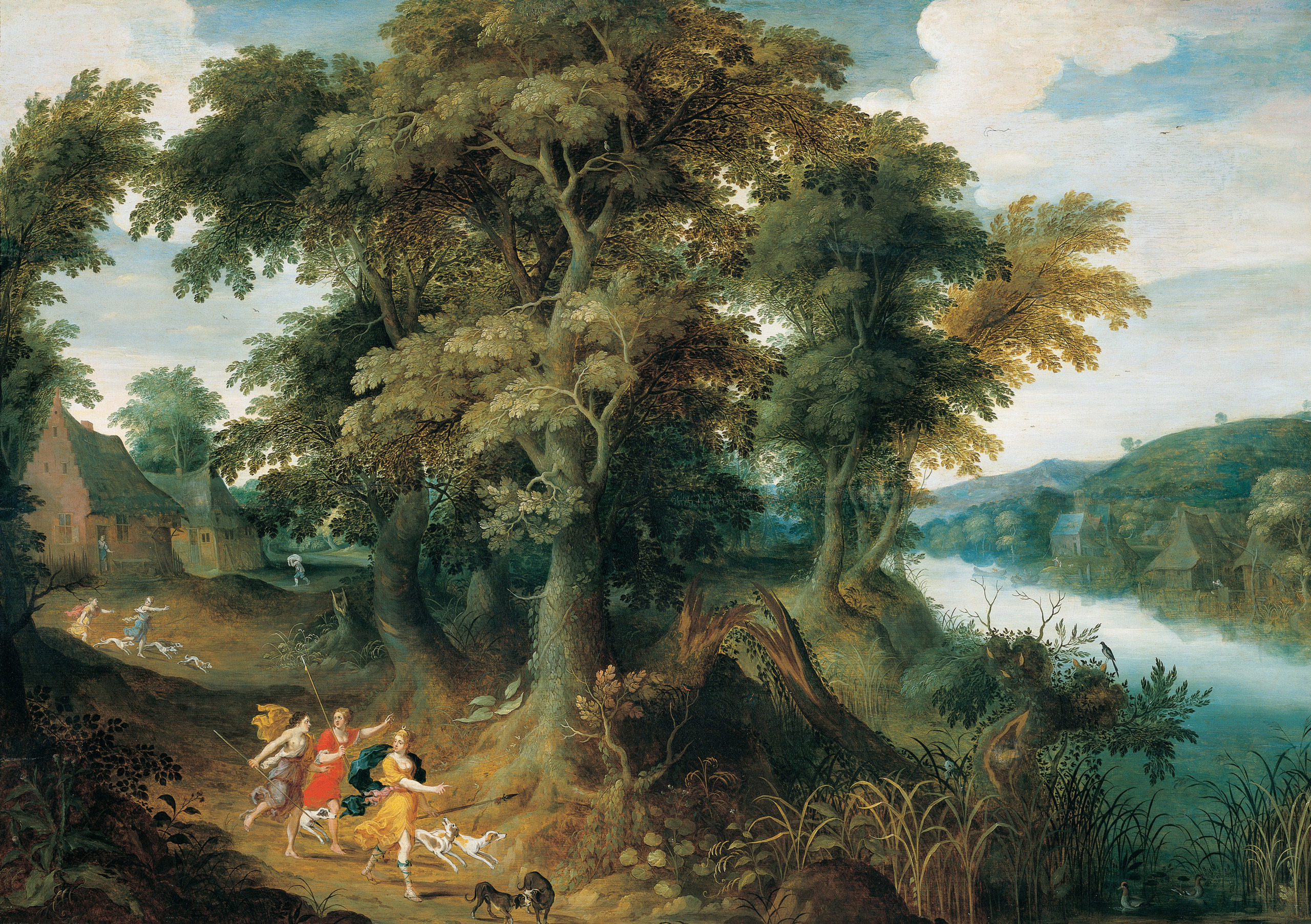 Some of the highlights among the Flemish school are a small landscape panel with a Rest on the Flight into Egypt attributed to Joachim Patinir (1475/80-c. 1524) and a beautiful painting by Herri met de Bles (active 1535?-50), The Last Apparition of Christ to his Apostles, signed with the owl, which has a wonderful foreground of a beach filled with shells and other sea creatures. There are also two wings with saints and donors by Adriaen Isenbrandt (active 1510-51), a Landscape with Diana and her Nymphs that I have attributed to Jasper van der Lanen (c. 1585-after 1634) and a Diana and her Nymphs (fig. 2) painted by Hendrick van Balen (1574/75-1632) and Jan Brueghel I (1568-1625). To the latter artist I have assigned the landscape in a small Christ on the Cross attributed to Otto van Veen (1556-1629). The collection further includes a large composition with Moses and the Brazen Serpent, which Silvie Begin has attributed to Hans Speckaert (?-1577), a Portrait of Margarita Gonzaga by Frans Pourbus the Younger (1569-1622), and two bozetti by Peter Paul Rubens (1577-1640): The Holy Family with St Isabel and the Infant John the Baptist and Allegory of Fortune and Virtue. Finally, mention must be made of a Judith attributed to Gerard Seghers (1591-1651) in a composition that shows the influence of Caravaggio. 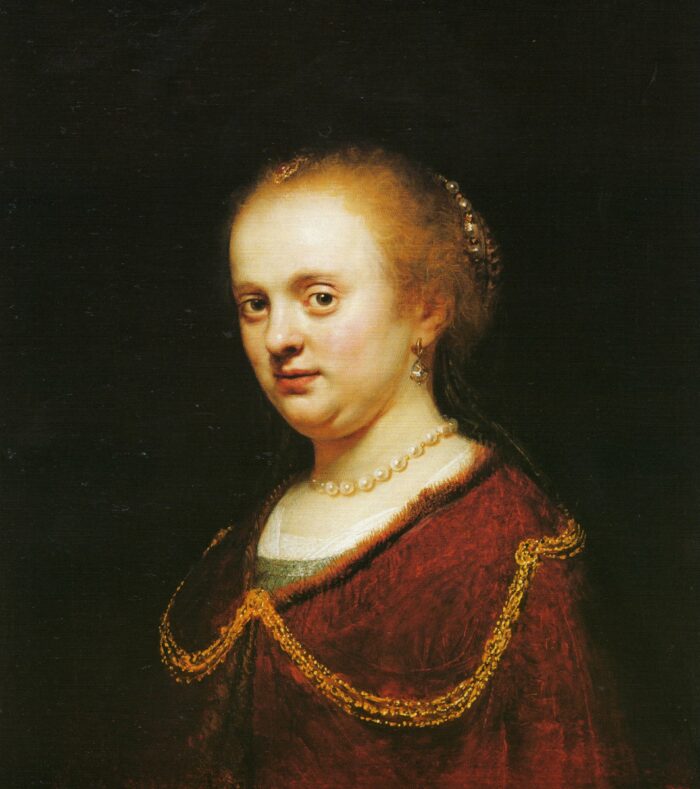 In the Dutch school there are several portraits by seventeenth-century artists like Salomon de Bray (1597-1664), Jacob van Loo (1614-70), Paulus Moreelse (1571-1638), Pieter Nason (1612-88), Nicolas Eliasz Pickenoy (1588-1655/56), Jan Anthonisz van Ravesteyn (1572-1657) and Govaert Flinck (1615-60). The name of this latter artist is associated with a tronie (fig. 3) which is signed by Rembrandt and dated 1634, and is probably a joint studio work by the two artists. There is a distinctive scene of Esther and Mordecai Writing the First Purim Letter by Aert de Gelder (1645-1727), another Rembrandt pupil (fig. 4). Also related to Rembrandt is a Presentation in the Temple by Jacob de Wet (1610-71), a composition with small figures in a setting of monumental architecture. There are several landscapes, including one with figures by a follower of Mattheus Molanus, Wooded landscape with River and Figures by Jan van Kessel (1641/42-80), Travellers before an Inn by Jan van Huchtenburg (1647-1753), The Beach at Scheveningen by Adriaen van de Velde (1636-72), a panel with a Shipwreck by Ludolf Bakhuysen (1631-1708), and a Landscape with the Ruins of Rijnsburg Abbey (fig. 5) by Aelbert Cuyp (1620-91). That landscape was probably painted at the end of the 1640s, and very clearly shows the Italian influence in the treatment of its brilliant golden light, with the ruins of the abbey by a body of water on the right illustrating a message about freedom and peace in the Netherlands. 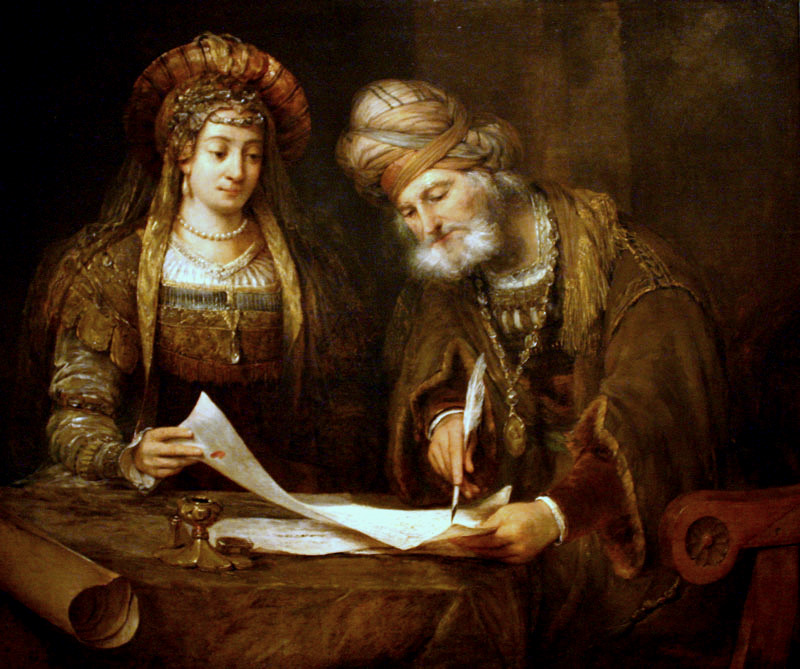 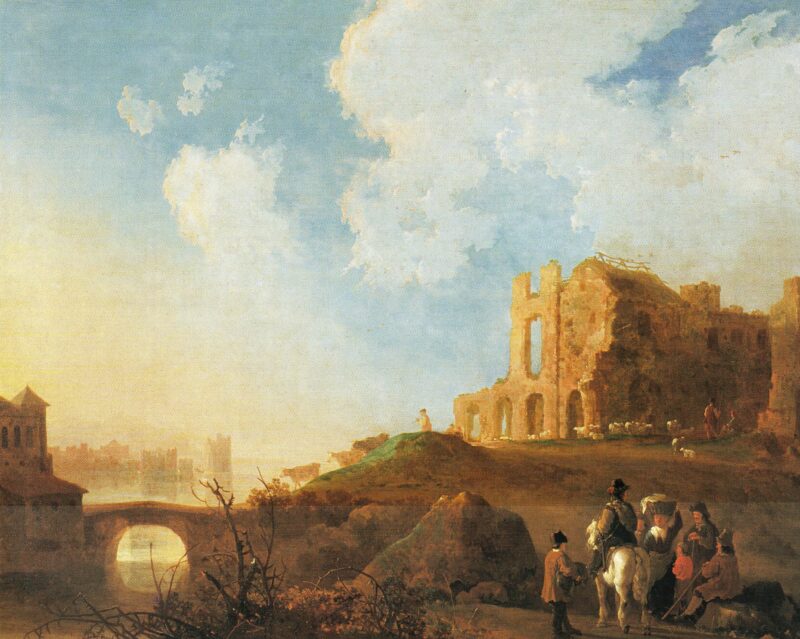 Aelbert Cuyp is also present in the collection of the Museo Nacional de Arte Decorativo of Buenos Aires, which has a large portrait of a family in a landscape with a view of the skyline of Rhenen in the distance. It was painted in collaboration with his father Jacob Gerritsz Cuyp (1594-1562). The collection of this museum includes a man’s portrait by Verspronck and a flower bouquet by Rachel Ruysch, in addition to several other pictures of a Dutch or Flemish origin.

As regards private collectors, the most important was Alfredo Hirsch, who assembled a major collection of works by prominent masters. In 1983, the Hirsch heirs gave several of them to the MNBA and a gallery was named after the collector.2 Some works remain in the family. Other private collectors enabled us to organize the exhibition Pinturas del Siglo de Oro Holandés en colecciones de Buenos Aires (Paintings of the Dutch Golden Age from Buenos Aires Private Collections) in 2003 in honour of the then Prince Willem Alexander and his wife Maxima Zorreguieta. In addition, there are collections of prints and drawings, one of which is devoted to Dutch and Flemish artists working in Rome. This was the collection that supplied the Bisschop drawing that helped me and my students at the Universidad de Buenos Aires.

Ángel Navarro was Professor of art history at the University of Buenos Aires. He is currently Curator of Drawings (before XIX Century) at the Museo Nacional de Bellas Artes in Buenos Aires, Argentina. He has been a member of CODART since 2014.

1. Ángel M. Navarro, Flemish and Dutch Masters (from the XVth to the XVIIIth Century) at the National Museum of Fine Arts, Buenos Aires 2002. The first catalogue was published in 1994.
2. The heirs were Mario Hirsch, Sarah Saavedra Guani de Hirsch, Claudia Caraballo de Quentin and Octavio Caraballo.