In 1907 the children of industrialist Ernst Carl Louis Posselt (1838–1907) gifted their father’s collection of 148 paintings to the Kurpfälzisches Museum Heidelberg. In addition to German, French, Spanish and Italian works, the principal focus of Posselt’s collection was on Flemish and Dutch painting of the sixteenth to eighteenth centuries. Within this field he had a particular passion for Dutch painting from the Golden Age.

Ernst Posselt was born in Heidelberg in 1838, the son of Wilhelm Heinrich Posselt, a professor of paediatrics at the university. After attending school in Heidelberg, he went to Brussels where he learned his trade as a merchant. In 1858, at the age of 20, Posselt established an export business in the English town of Bradford. In 1883 he moved to Warsaw, from where he started several textile businesses, including in Zgierz and Riga. Posselt spent the final years of his life in Berlin, surrounded by the art he had collected over the years, some of it acquired on the Russian art market. The noted Berlin museum director, Wilhelm von Bode, advised him in the development of his collection.

The Posselt family’s close association with Heidelberg led to the collection being gifted to the city. The donation agreement stipulates that all the paintings in the Posselt Collection should be on permanent display. Today the Dutch and Flemish paintings can be seen in the museum’s Painting and Sculpture Gallery in their own dedicated spaces. The works are densely hung over several rows, echoing the way paintings would have been displayed in seventeenth-century middle-class Dutch homes. It was decided to group the paintings by genre, to enable viewers to compare the works of the often highly specialised painters of the period. 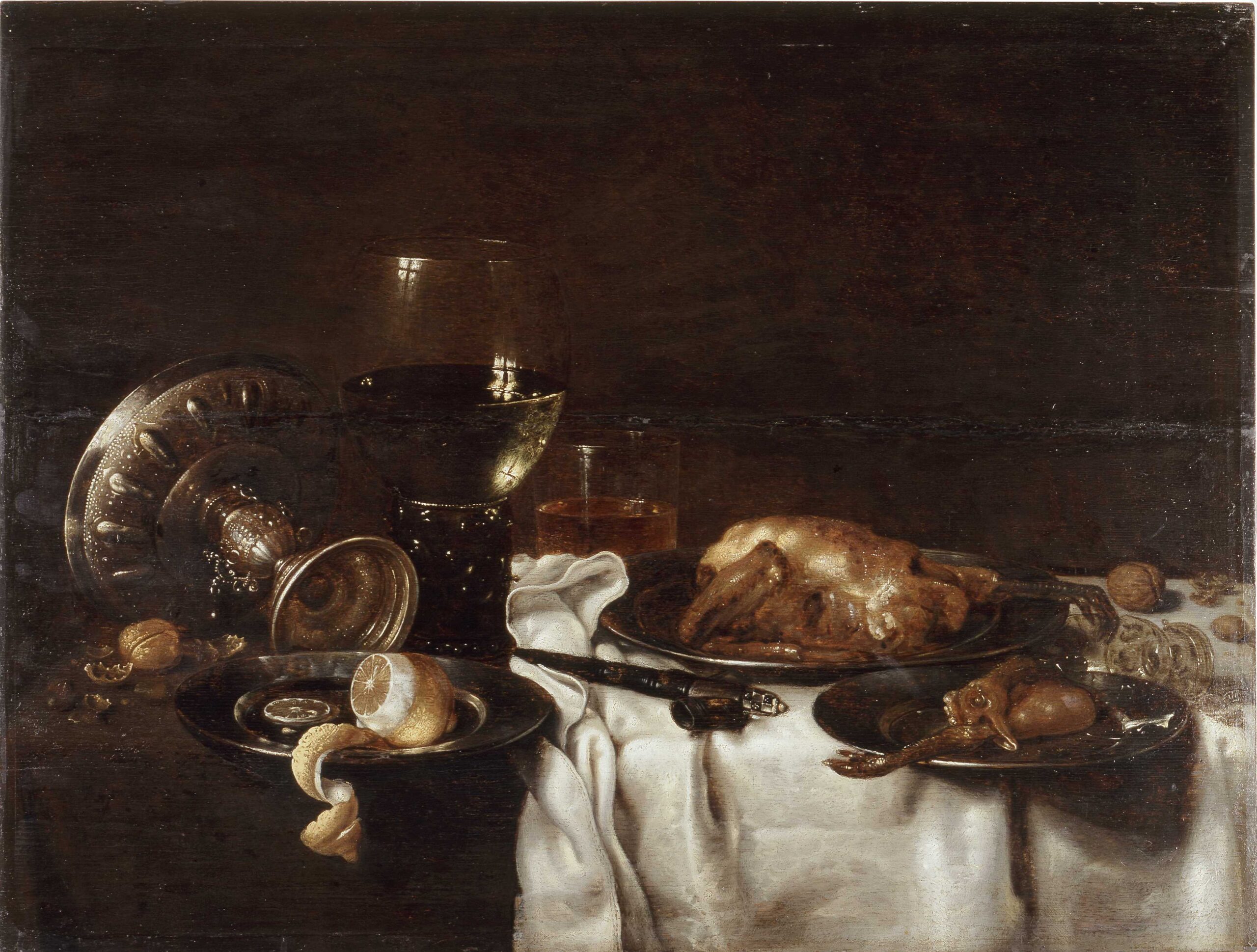 The still lifes in the Posselt Collection include some remarkably fine works by painters who were highly influential in shaping still life painting in the Golden Age. Among them are works by Pieter Claesz., Willem Claesz. Heda, Jan Davidsz. de Heem, Willem Kalf and Cornelis de Heem. The breakfast still life by Heda, for instance, reminds us of the role played by this painter in the development of the monochrome ‘banketjes’, depictions of light meals using a reduced colour palette (Fig. 1). The charm of the painting lies in the sensitive balance of colour, ranging from cool, metallic silver and grey-green to warm, golden yellow tones, as well as in the particular attention the painter pays to observing the light and its reflections. 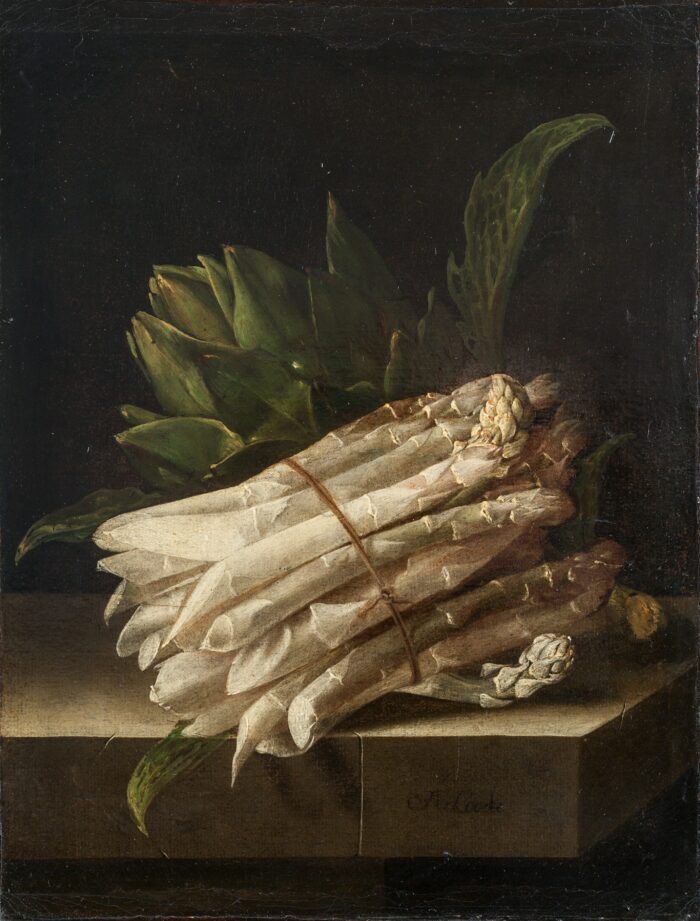 In addition to famous names, the collection contains still lifes by lesser known artists which stand out due to their particular virtuosity and unusual compositions. One exceptional work is Still Life with Asparagus and Artichoke by Adriaen Coorte who was based in Middelburg (Fig. 2). Pared down to a few objects and using a reduced palette, the composition captivates the viewer with its distinctive, seemingly unpretentious imagery and detailed observation of nature.

The still lifes with hunting trophies form a separate group in the collection. Works by artists who specialised in this genre, such as Elias Vonck, Cornelis Lelienbergh and Pieter Boel, range from small still lifes of birds to large-scale game scenes in the Flemish style. In the collections of middle-class art lovers, works like this played a particular role in demonstrating the aspirations of the wealthy bourgeoisie to a high social status.

Comprising 57 works, this particularly large group of landscapes and seascapes reflects the breadth of different types of Netherlandish landscape painting. They range from naturalistic portrayals of the flat coastal, woodland, village and meadow landscapes of the Netherlands, with their low horizons and wide, overcast skies, skilfully depicted by Esaias van der Velde, Anthonie Verstraelen, Jan van Goyen or Meindert Hobbema to the southern landscapes by Italianate painters such as Nicolaes Pietersz. Berchem, Jan Asselijn, Abraham Jansz. Begeyn and Jan Hackaert.

Van Goyen’s works exemplify the ground-breaking new style of the homely flat landscape. In his Landscape with Farmhouse the simple motifs appear to have been randomly chosen and the scene conveys a natural visual impression (Fig. 3). Looking at this painting, evidence of the artist’s quick and efficient way of working is clear to see. 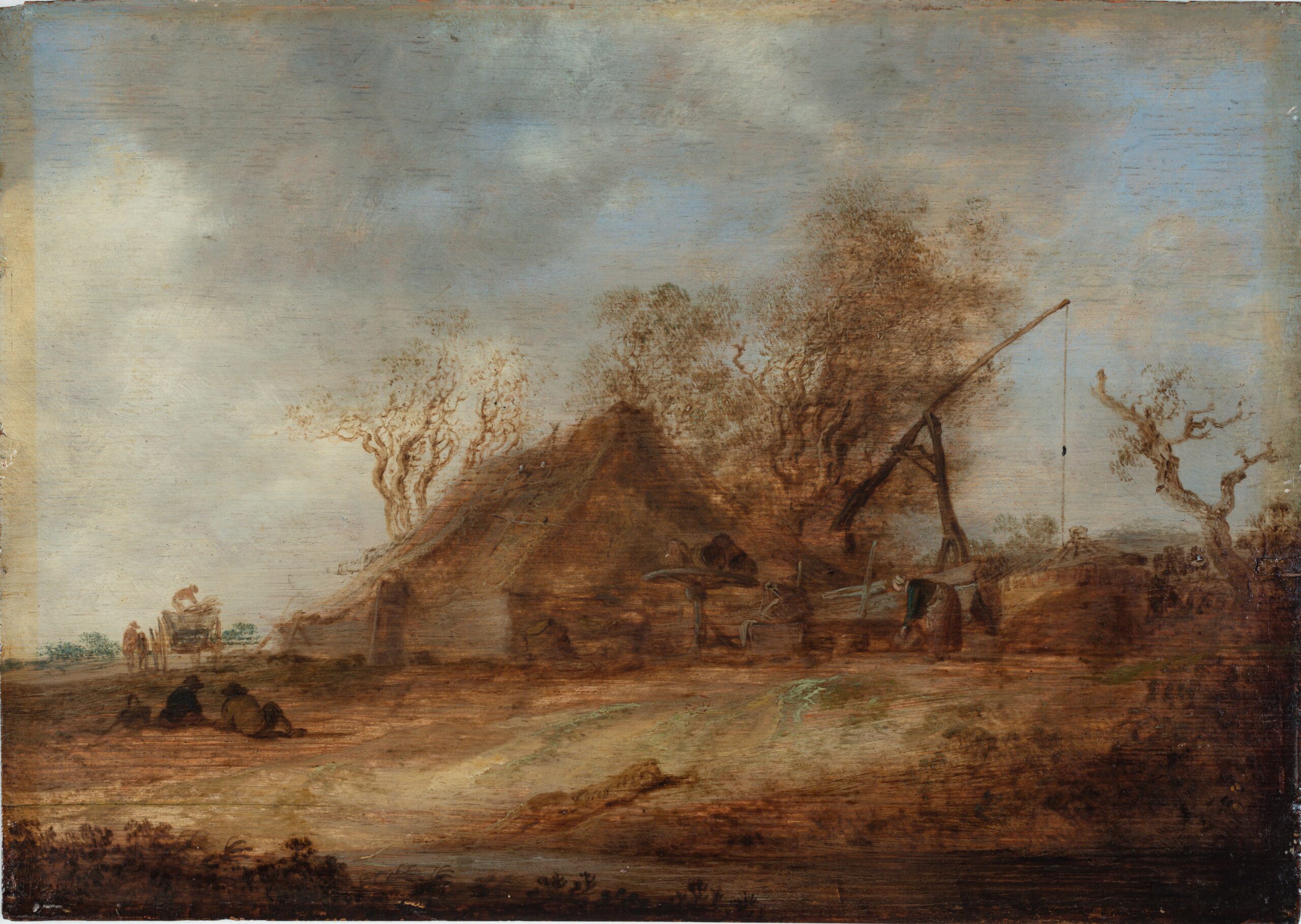 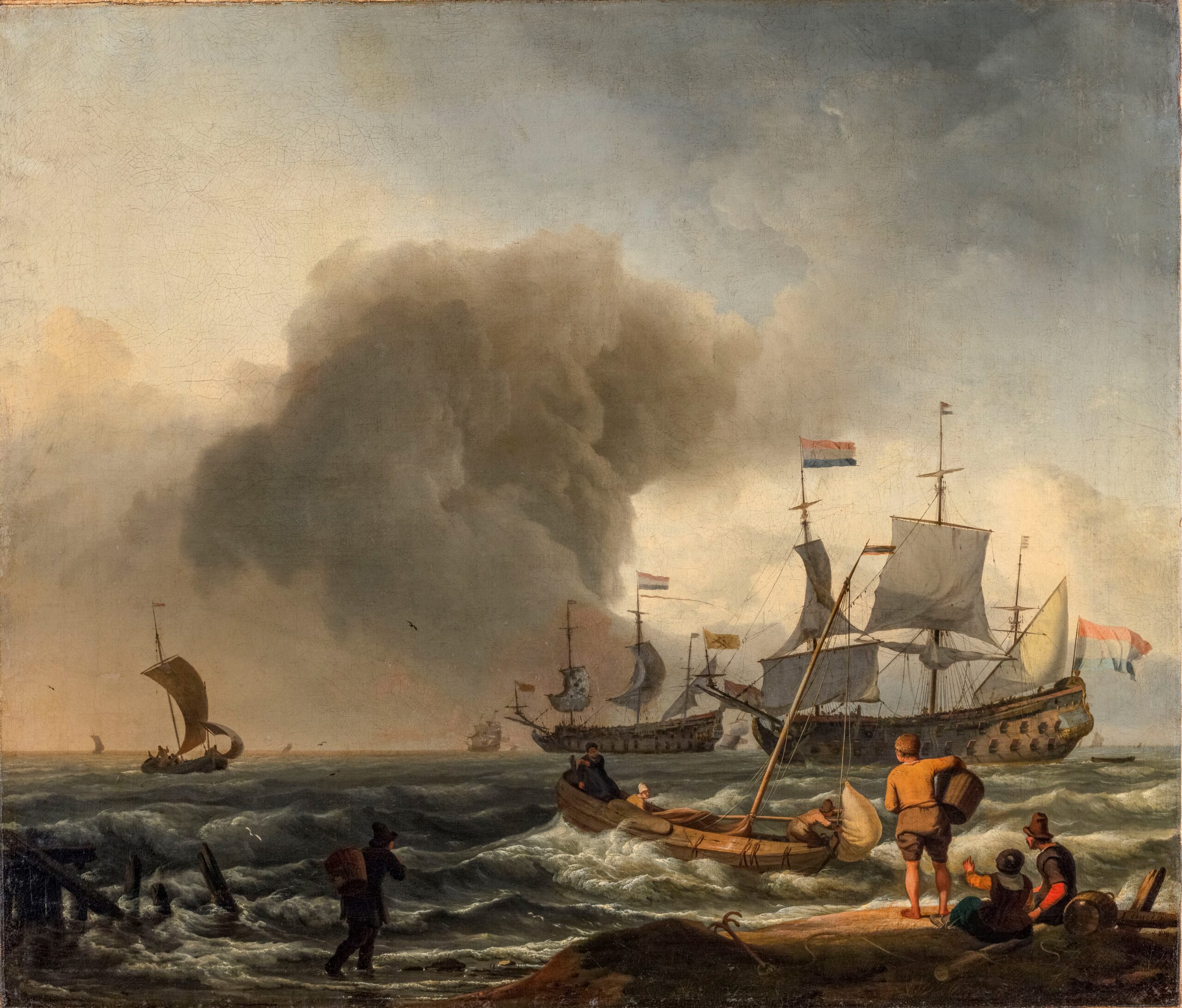 Like van Goyen, Jan Porcellis played an important role in developing tonal painting. The Posselt Collection includes a Porcellis seascape of a Dutch coastal scene with several fishing boats. The painting’s focus is on rendering the sea, the cloudy sky and the hazy atmosphere. In contrast, Ludolf Backhuysen made seascapes with meticulously detailed depictions of warships and trading vessels. Seascape with Fishing Boats and Warships shows two retour ships which would have plied between the Dutch Republic and the West and East Indies (Fig. 4). They were deployed as escort vessels to protect and defend trade convoys, as indicated by the open gun-ports on the two gun decks.

The biblical and mythological scenes in the collection include small-format pictures by artists such as Frans Francken the Younger, Hendrick van Steenwijck the Younger, Willem de Poorter and Hendrik van Limborch, as well as larger paintings, for instance from the workshop of Anthony van Dyck, or by Gerard de Lairesse and Rembrandt’s pupils Gerbrand van den Eeckhout and Aert de Gelder.

The finely executed paintings from the workshop of Frans Francken the Younger and by Hendrick van Steenwijck are particularly exquisite. In a work from Francken’s studio, in a dramatically lit night-time scene painted in strong colours, the viewer is confronted with the gruesome murder of John the Baptist. With great persuasiveness the painter evokes the different reactions of those witnessing the event. Van Steenwijck’s small painting on a copper plate shows a solitary St Jerome sitting at a reading desk in a Gothic church interior. Every detail of the space and the way the light falls through the window are depicted with the greatest precision and finesse. 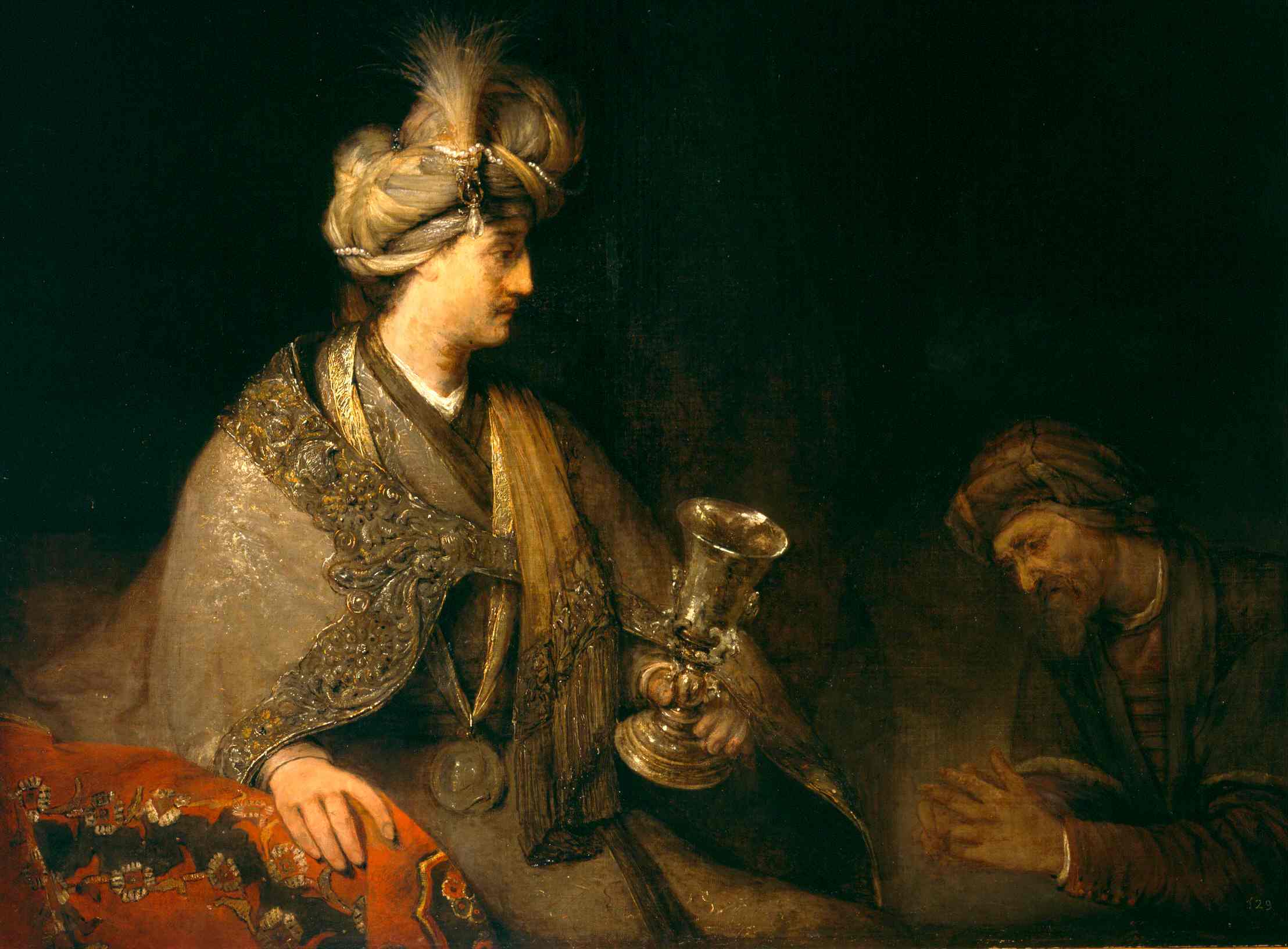 The painting Jupiter and Antiope from the workshop of van Dyck from around 1620 and de Gelder’s painting Judah and Joseph with the Cup from around 1682 (Fig. 5) are both larger than the cabinet picture size. De Gelder’s painting reveals how closely the Rembrandt pupil followed the late style of his master. This can be seen in the warm tonality, the pastose brushwork and the fact that the scene is reduced to two figures, so that the focus is on the emotional moment of the human encounter. 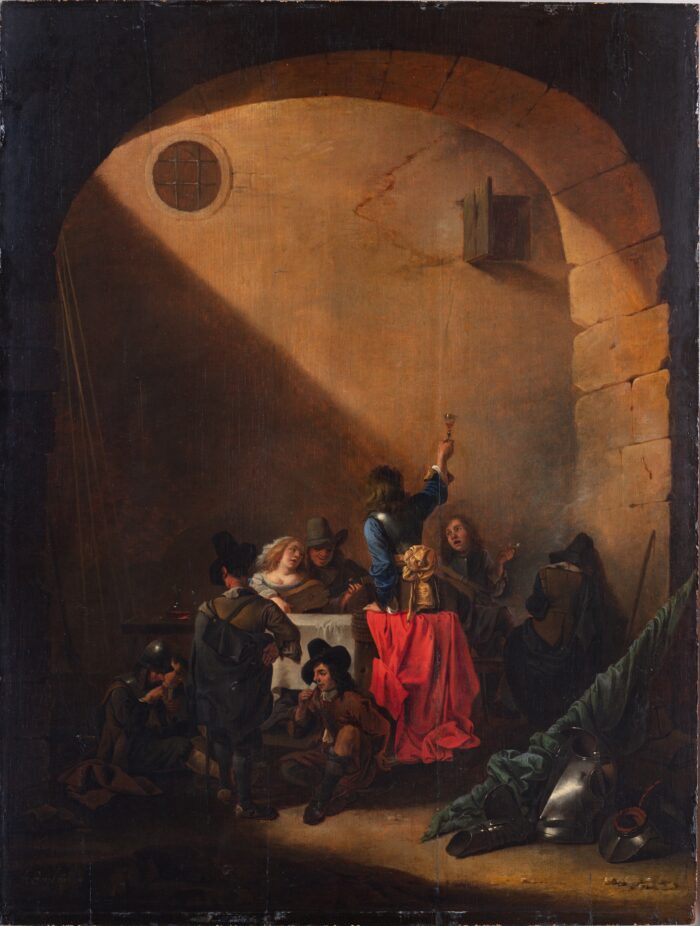 Stable interiors, farmhouses, taverns, guardhouses and village squares provide diverse settings for the figures depicted in the many peasant genre paintings in the collection. Works by Joost Cornelisz. Droochsloot, Pieter Symonsz. Potter, Cornelis Saftleven and from the circle of Jan Miense Molenaer, Adriaen van Ostade and others vividly convey to the viewer the lewd and stupid behaviour of idle, carousing, gambling or flirting peasants and simple soldiers. Anton Goubau’s Guardroom, in which soldiers neglect their duties and indulge in gambling, alcohol and amorous adventures, is to be seen as a moral warning against indolence and profligate dissipation (Fig. 6).

In addition to peasant scenes, the collection also includes genre pictures depicting the bourgeoisie, with merry parties of people talking, making music or eating a meal, brothel scenes and also paintings of individual figures in bourgeois interiors, such as a painter in a studio, a doctor or a woman reading a letter. Among the painters of these works are Anthonie Palamedesz., Jan van Bijlert and Esaias Boursse.

The array of peasant and middle-class interiors is complemented by depictions of sacred spaces. One of these is the church interior flooded with light by Antwerp artist Peeter Neeffs the Elder. The picture shows a three-aisled Gothic church reminiscent of Antwerp Cathedral and is characterised by painstakingly precise draughtsmanship (Fig. 7). In addition, the collection contains a small number of portraits, including the delicate likeness of a Woman in a Red Silk Dress by Caspar Netscher, which testifies to the artist’s colouristic and fine painting technique (Fig. 8). 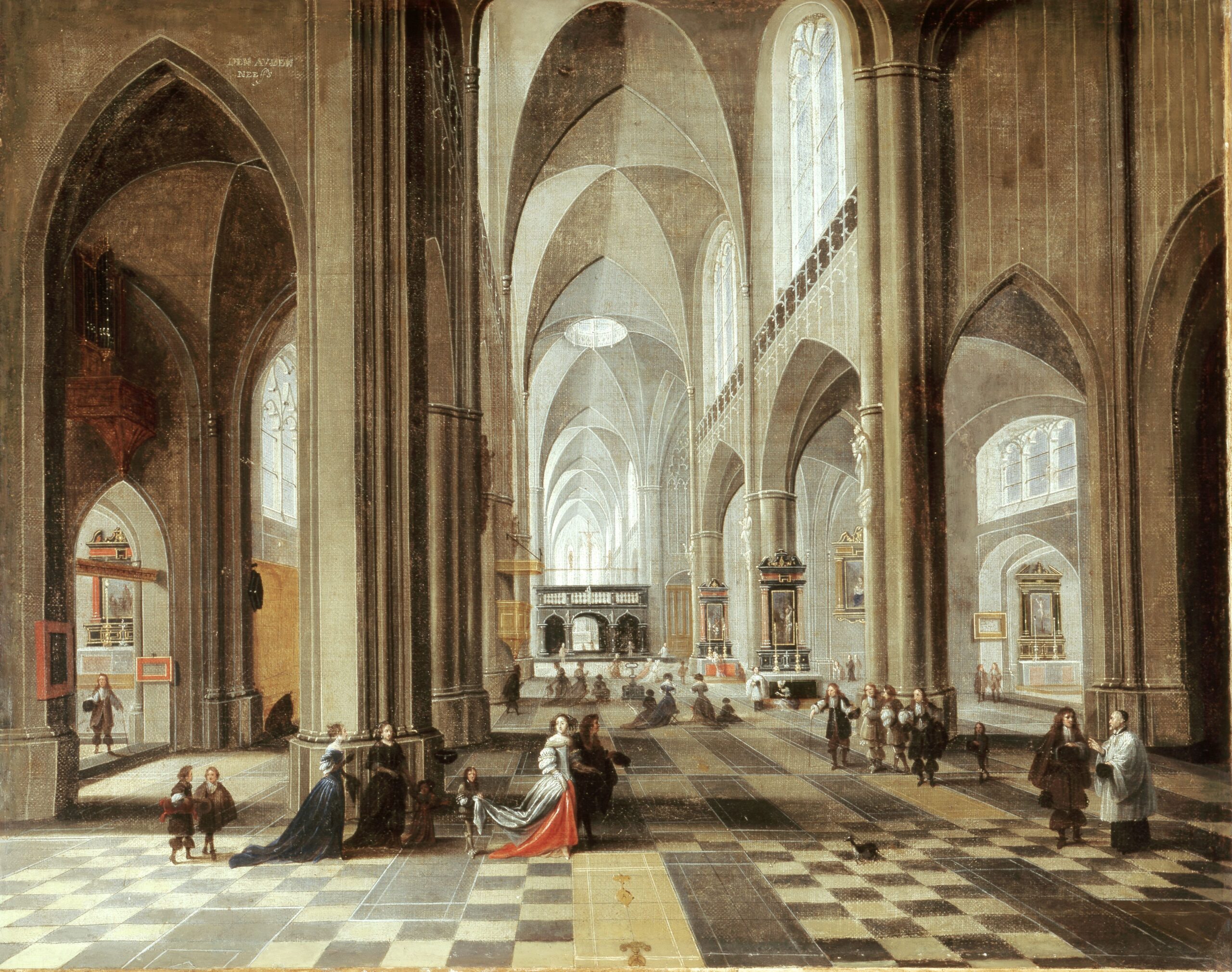 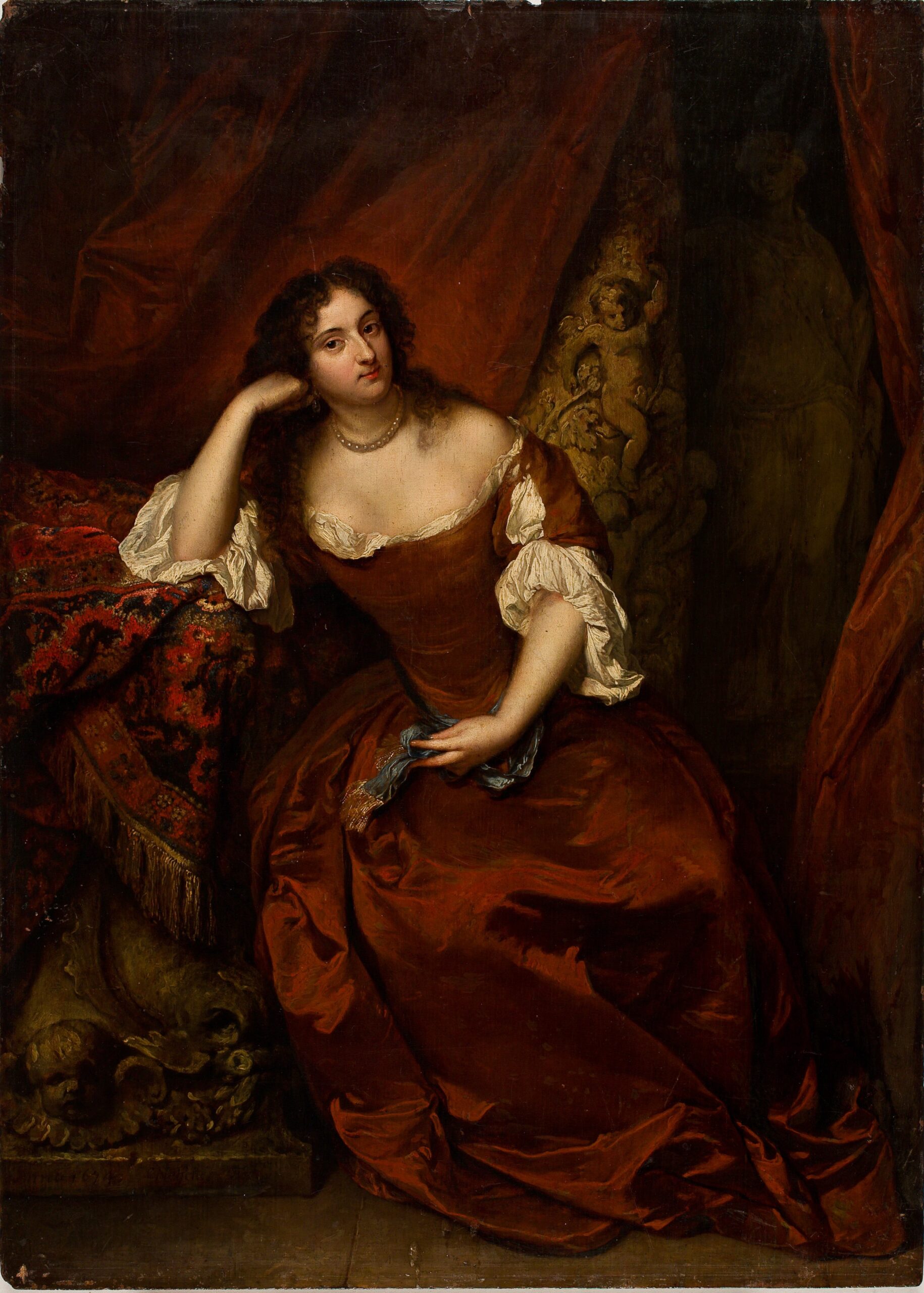 Ernst Posselt’s passion for collecting and the instinct he displayed in his choice of appealing works applied to all genres of painting, but his particular penchant for still lifes and landscapes is apparent. It is also evidenced by the fact that there are some remarkably fine pieces among these works. The collection provides an opportunity to discover lesser known masters and to immerse oneself in the variety of different themes and painting styles in Netherlandish art.

Dagmar Hirschfelder is Head of the Department of Paintings and Graphic Arts of the Kurpfälzisches Museum der Stadt Heidelberg in Heidelberg, Germany. She has been a member of CODART since 2018.