Osias Beert (1580-1623), Still Life with Various Vessels on a Table, ca. 1610
Promised gift of Rose-Marie and Eijk van Otterloo, in support of the Center for Netherlandish Art

My interview with Christopher Atkins, Van Otterloo-Weatherbie Director of the Center for Netherlandish Art at the Museum of Fine Arts in Boston, takes place in early October, during one of the most tumultuous years imaginable; as museums across the world have been forced to close their doors and adjust to a very different reality. And yet, even in the midst of this crisis, institutions and individuals have taken bold steps to reimagine the future of the sector – exploring digital frontiers, diversifying their narratives, and embarking on alternative models for collaboration.

In the field of Dutch and Flemish art, the Center for Netherlandish Art undoubtedly has one of the most ambitious agendas. The Center was founded in 2017 through a major gift from Rose-Marie and Eijk van Otterloo, and Susan and Matthew Weatherbie. Although the project began in the pre-Covid era, the Center has since gained new significance as a space for bringing people together, and supporting professionals in the field as well as the wider community. As has become standard in the age of Corona, Christopher agrees to meet with me over Zoom. Christopher has been in his post as Director of the Center since 2019, having previously worked at the Philadelphia Museum of Art. The following is an edited version of our conversation.

How have the past few months been for both you and the Center?

It’s been a trying time. None of us anticipated this, and we’ve been constantly grappling with the changing situation. The MFA has been closed since March, and just reopened to the public 26 September. There’s been all kinds of impact on what we do and how we operate. 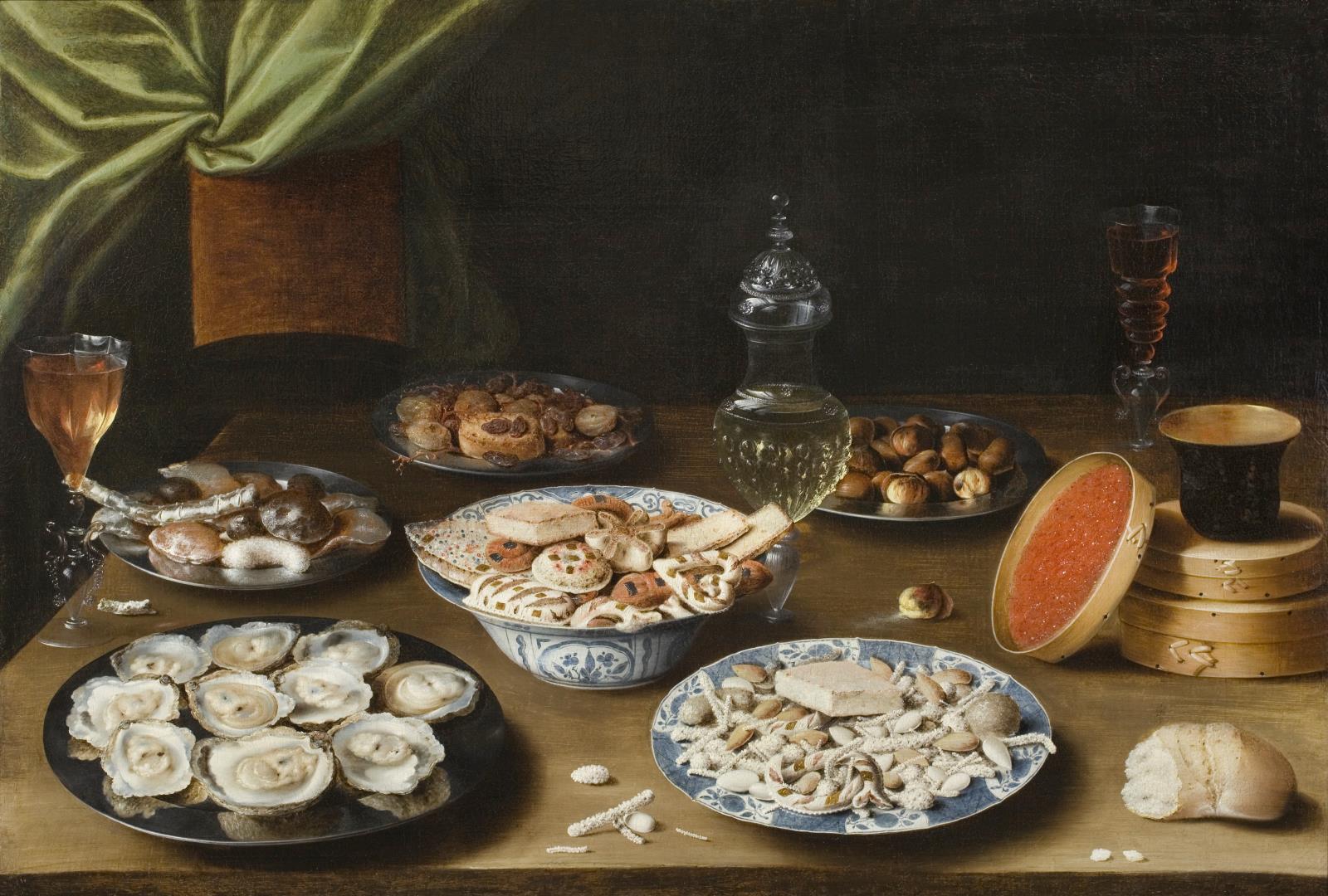 Osias Beert (1580-1623), Still Life with Various Vessels on a Table, ca. 1610
Promised gift of Susan and Matthew Weatherbie, in support of the Center for Netherlandish Art

The original plan for the Center was to open this year, has that changed given the current circumstances?

We’ve had to shift our schedule. The CNA is operational – and we’ve started to do programs – but the infrastructure is still in development and there are two key components of that. One is that we’re completely reinstalling the galleries of Dutch and Flemish art, which will enable us to present the integrated collections: the historical MFA collection, as well as the promised gifts of the Van Otterloos and Weatherbies, alongside some acquisitions that will allow us to tell new stories. That was imagined to be the first phase of the CNA’s launch but, because of Covid, that has shifted. We’re now looking at fall 2021 to complete that work. In fact, we were poised to de-install the galleries at the end of March when all of this happened.

The second component is that we’re building the library and forum, located within the MFA. These will be accessible from the galleries, and the spaces will be linked. It involves converting existing space to a new purpose. During the closure, we were able to advance work on designing the space, and our construction firm is now able to get back in. That will also be opening in fall 2021. The advantage is that, where we had originally envisioned a multi-phase launch, we will now be able to launch both elements in the same season.

You’ve talked about the re-presentation of the collection and the new stories you hope to tell. Are you able to share more about your work on that?

I should say that it’s a collaborative effort. There are lots of people involved from across the MFA; including curatorial staff in paintings, decorative arts, and works on paper, and it’s a really great group.

For us, this is a fantastic opportunity but it’s also an imperative because of the moment we’re in. We want to find ways to connect the stories of the past with our present. We’re thinking largely under the scheme of place. The place of the Netherlands and Flanders, interactions with places beyond Europe, domestic space, the place of art in the home and the significance of place in the northern tradition. Those are some of the key nodes that we’re looking at.

Our global engagement gallery is something I’m really excited about. Critically, we don’t want to present it as an addendum but as an integrated part of the dialogue, and a means of reframing works from the collection.

There has been a lot of discussion recently, across the globe, but especially in the US about the Black Lives Matter movement and how this impacts museums as they look to address their racist systems. Is that in your mind as you think about these issues of display?

Absolutely. We have to. As a field, a discipline, and an industry we have a long way to go but we’re thinking about how we do that appropriately. We’re also talking to others about how we can accomplish the goal of presenting a more balanced and socially-informed representation, one that is better reflective of the historic circumstances and which can better engage contemporary audiences. 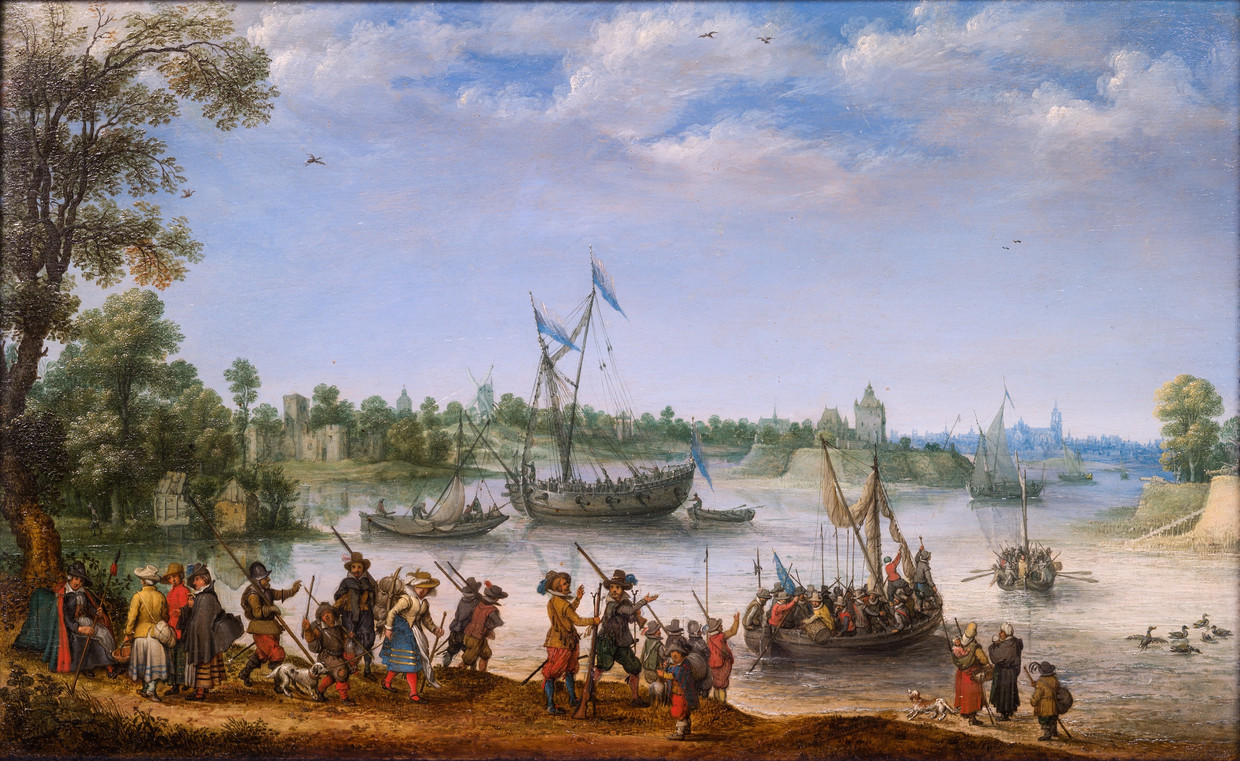 Adam Willaerts (1577-1664), The Departure of the Pilgrims from Delftshaven, 1620
Promised gift of Rose-Marie and Eijk van Otterloo, in support of the Center for Netherlandish Art

Something that strikes me is your emphasis on place. Obviously, you have the place of the Netherlands, but how do you see the relationship between the Center and the city of Boston?

We’re looking to create a learning community in Boston that engages beyond the city. One of the great resources of the city is our academic communities. We’re looking at how we can engage with them more fully. So, that’s one aspect. The other is that the Center was placed at the MFA. It is a research institution but not exclusively. By which I mean, why wasn’t it placed at a university? The idea from the beginning was to be publicly engaged, and one of our key goals is to expand the public appreciation for Netherlandish art.

We’re thinking about how we can give our ‘back of house’ scholarship greater prominence. I think that’s where we generate excitement and interest, by sharing as broadly and openly as possible. We want people to see this as an active field. Yes, it’s art from 400 years ago but there are pressing questions that people are asking about it today.

We recently did a symposium about sugar in the early modern Atlantic world, where we started with a still life by Osias Beert and spiraled out from there. We used that to engage with larger issues of commodity exchange, and of course the slave trade that fueled part of that consumption. We’re also working on a program around the 400th anniversary of the Mayflower. The pilgrims landed very close to Boston but they were in Leiden for twelve years. Amazingly, through the promised gift, we have a painting by Adam Willaerts of the pilgrim fathers departing Delfshaven, which offers a great opportunity to start a conversation not only about the history of the Dutch/American relationship but also questions of migration and movement more broadly. 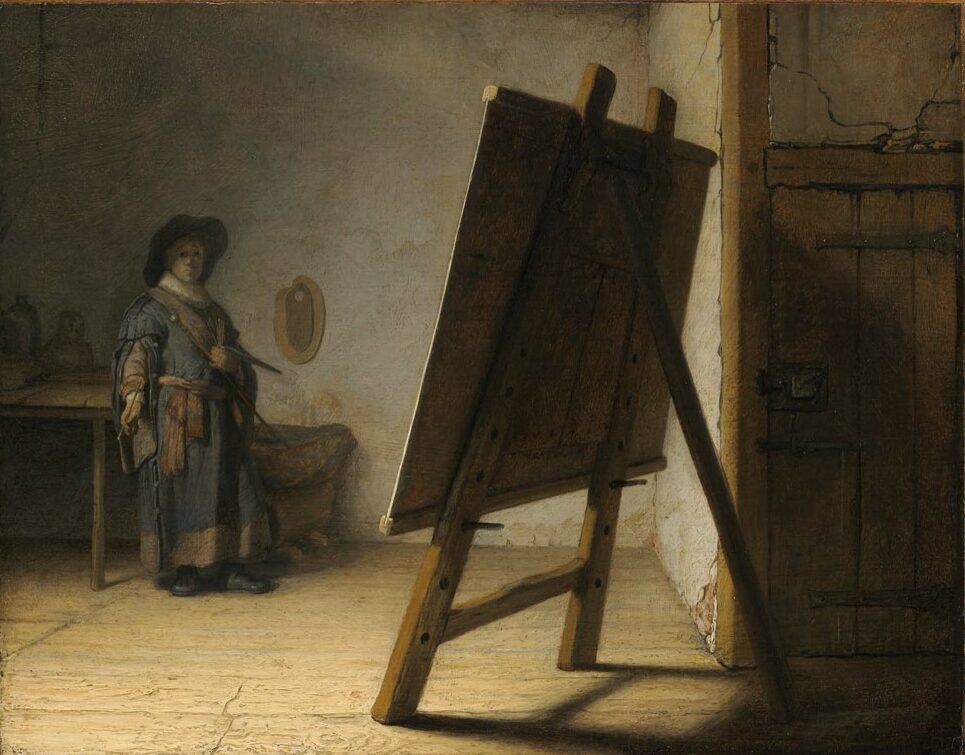 Can you tell me about any works from the collection that you’re particularly excited about displaying?

We have an interesting group of works that are related by the theme of artistic creation. Probably our most famous work in this area is Rembrandt’s depiction of the artist in his studio. We’re going to put that in a conversation with some other works, including our early Rogier van der Weyden painting St Luke Drawing the Virgin. We’ll show them in greater proximity and have a dialogue about the artistic process. We also have some self-portraits, including one by Maria Schalcken, which adds another element. Our new installation will be able to showcase works of art by women artists. Of course, it’s not entirely representative and there’s more work to be done but we plan to show seven different paintings by women, as well as a long term loan depicting an important female patron.

The CODART and scholarly community understands this all too well, but I’m not sure our public knows about the diversity of artistic production – in gender terms anyway – so I’m really excited about what that means, and what that says to our visitors. 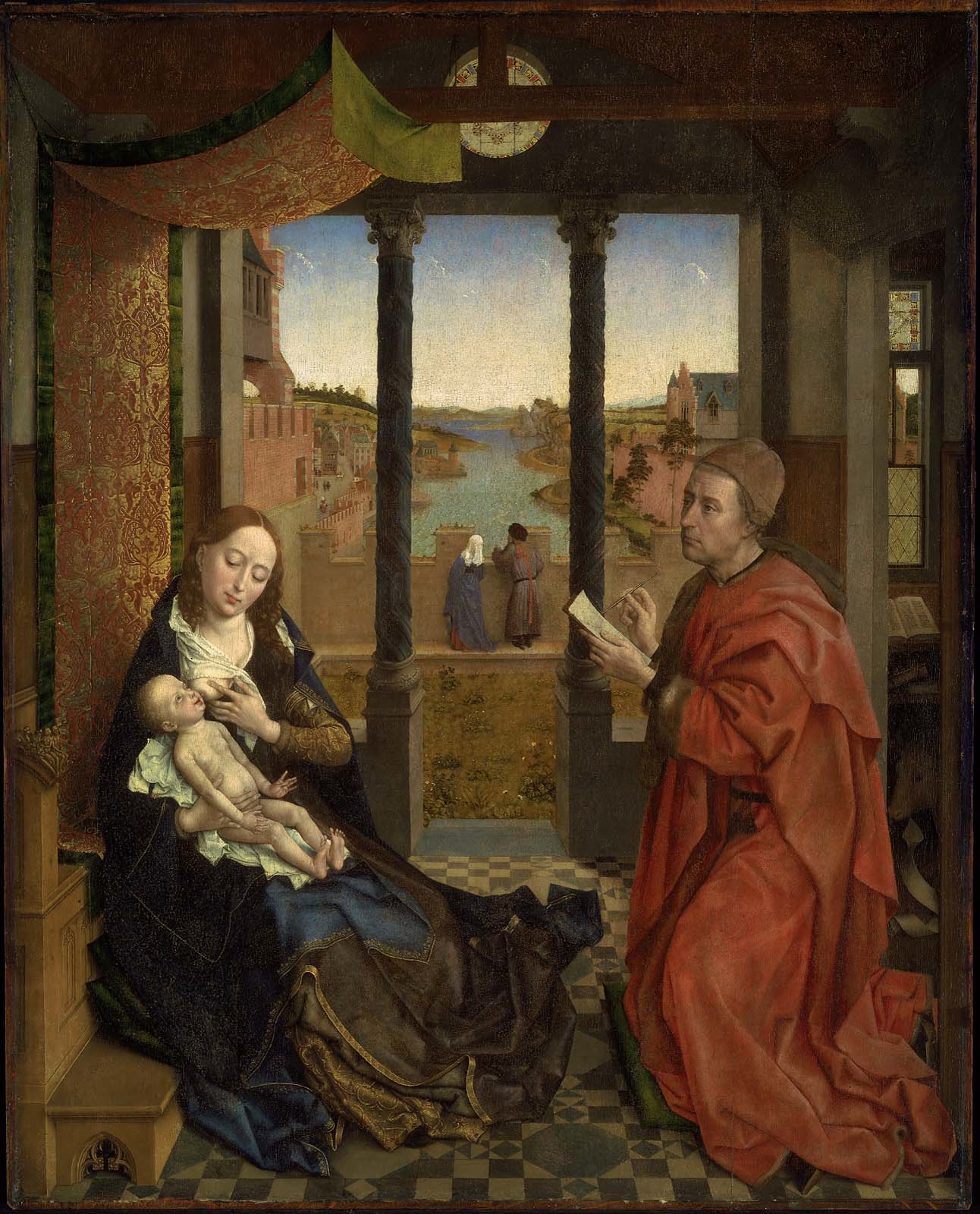 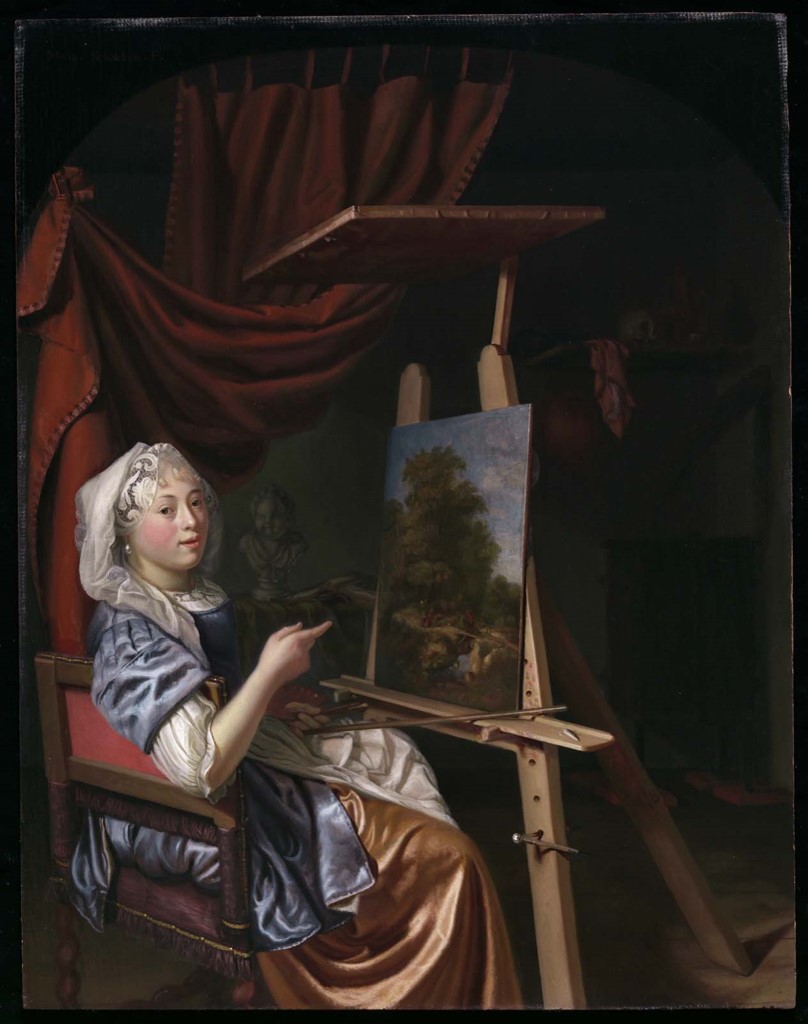 I think sometimes – in focusing on the works themselves – we can exclude a discussion of artists’ biographies, but I think that’s something that can really capture the public’s imagination…

One of the galleries we’re installing will be a CNA designated rotating space, which we can change over more frequently than the permanent collection. Our initial installation will be about the art market in the seventeenth century, which is something I am personally interested in and is well known in scholarship but hasn’t been presented that well in public forums. I think it links to some of those ideas. It’s about the birth of capitalism really and if you follow that thread it leads us into some interesting places. It’s about putting these objects not just in the context of their genre, but in the context of a social and capital dynamic.

What do you hope the center will be able to offer scholars and curators, including CODART members?

One of our programmatic areas will be a residency fellowship program, which will launch once we open the library and study center. Through fellowships scholars and students will be able to devote themselves to individual research projects and engage with the resources of the MFA. We’re also interested in expanding the opportunities for training: art historical, curatorial, and conservation. We want to bring people together, as CODART does. That’s one of the great things about CODART, in that it brings our professional cohort together, but perhaps there’s a way in which we can expand that opportunity to others.

We also hope to share the collection broadly though loans and collection sharing, so as CODART members have projects – please think of the CNA and MFA as places that might be able to participate and help. We’re building, looking forward to the future, and looking forward to working with CODART and its members.

Helen Hillyard is Assistant Curator at Dulwich Picture Gallery in London, United Kingdom. She has been a member of CODART since 2016.

Christopher Atkins is the Van Otterloo-Weatherbie Director of the Center for Netherlandish Art at the Museum of Fine Arts in Boston. He has been a member of CODART since 2012.