The Maagdenhuis was once the girls’ orphanage in Antwerp. In 1553, thanks to a donation from the merchant Jan Van Der Meere, the city was able to open a school for “young maidens” in the rear annex. Eighty years later, around 1634, the complex was expanded, including the beautiful inner courtyard. It was then that the building acquired – almost entirely – its current appearance. This was thanks to a bequest from Gilbert Van Schoonbeke (1519–1556), a major real estate developer. He himself did not take a particular interest in the fate of orphans, foundlings, or the poor, but through a twist of fate part of his estate ended up with the almoners, who used it to finance the building’s expansion. Several portraits and a portrait bust of him can still be seen in the museum.

A museum was set up for the first time in the former chapel on 20 September 1884. The initiative for the new museum was taken by the then Board of Civic Almshouses, the predecessor of the current OCMW (Public Center of Social Welfare). It only lasted a few years, since the poor relief board badly needed the premises for its administration.

In July 1930 it reopened at the same location to host an international conference on charitable works, following the World Exhibition. The museum has been open to the public continuously since then. Another expansion followed in 1985, when the administrative offices were made ready for use as the “Salons.”

The collection is conspicuously diverse in two ways. First, the artworks and objects themselves are extremely varied (paintings, sculptures, ceramics, furniture, gold and silverware, pottery, etc.), still preserved in its original setting. This creates a particularly intimate and delicate atmosphere, which is greatly appreciated. Second, the diverse origins of the collection are also remarkable. Many almshouses (the Boys’ Orphanage, the Home for Foundlings, the “Lunatic Asylum” etc.) fell vacant or were torn down towards the end of the 19th century. Their inventories and artworks were transferred to the Maagdenhuis, along with the superb furniture from nearby St Elisabeth’s Infirmary, the second oldest infirmary in the country. This institution also provided the nucleus of the city’s main archives, including a document with the oldest seal of the City of Antwerp (1232).

Given the museum’s origins and the context of its early history, it is not surprising that the collection contains very few seascapes or still lifes, for instance, but has an abundance of portraits and history paintings, some of which are described below.

Highlights of the Collection

One of our most important works of art is an early painting by Jacob Jordaens, The Washing and Anointing of the Body of Christ (known as De Nood Gods; fig. 1). The scene is in a sense iconic for the context of our organization, “the care for the injured or deceased.” It was made in two stages. The central section with the Virgin Mary, Nicodemus, and Joseph of Arimathea surrounding the dead body of Christ was painted by the young artist around 1620–1623. The enlargements on all four sides were added in or after 1650. In 1679, after Jordaens’s death, the painting was donated to the Maagdenhuis, where it has remained ever since. With its restoration in 2010, IRPA, led by Hélène Dubois, laid bare the different layers of the complex work. During the CODART FIFTEEN Congress, those who took part in the excursion to IRPA were able to learn the results of this work. 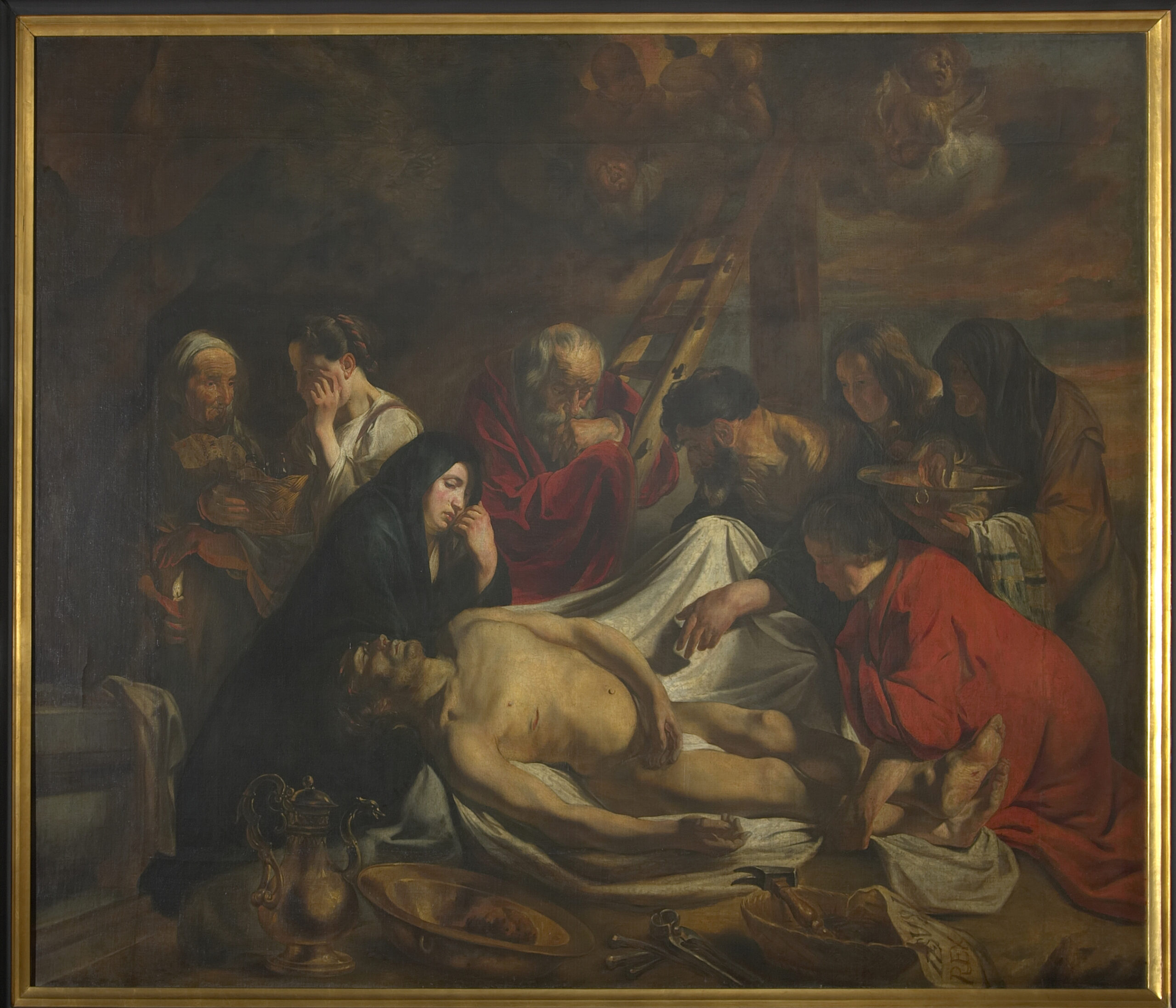 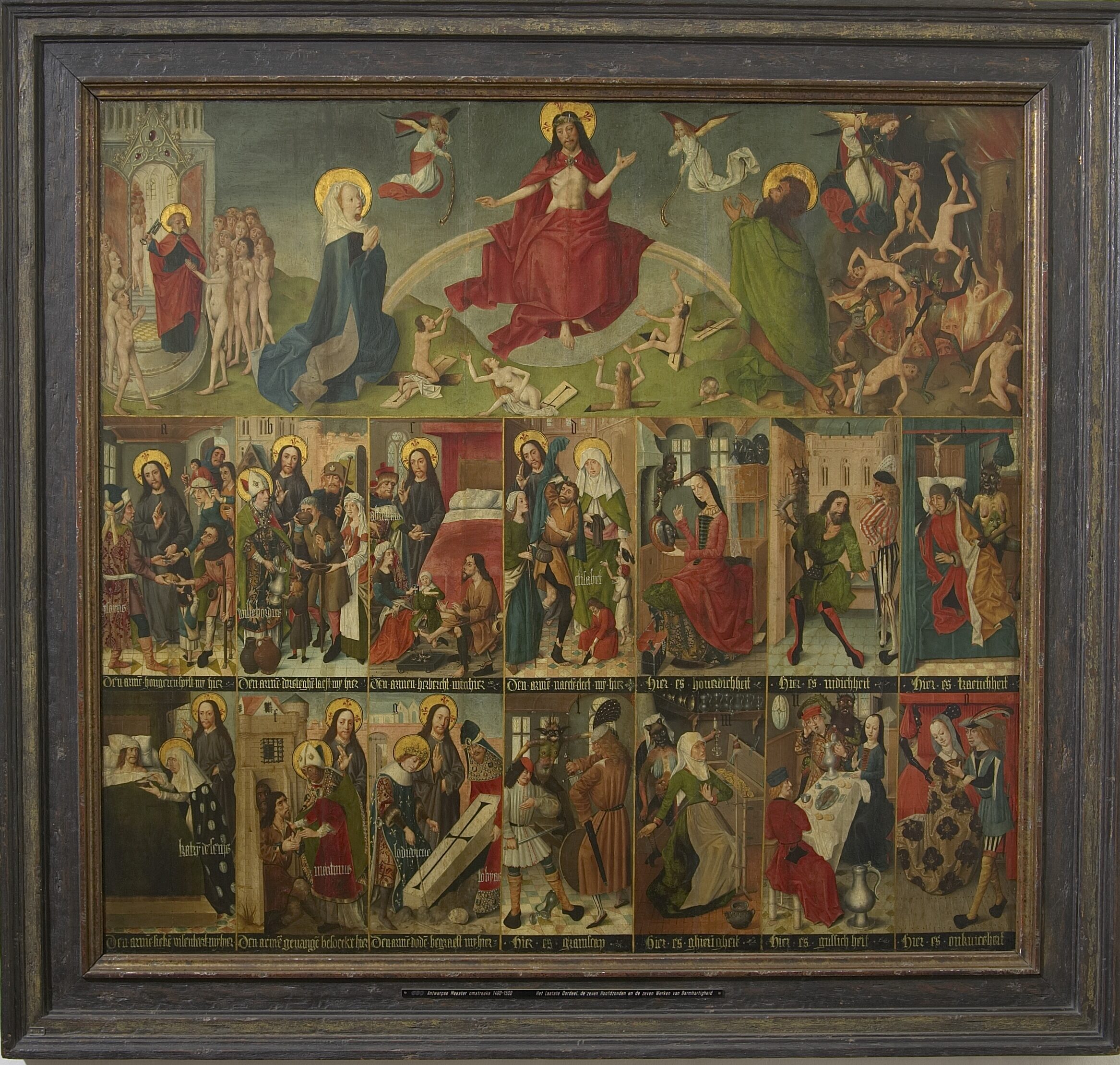 Another highlight of the collection that is closely related to the former purpose of the Maagdenhuis is the late 15th-century panel depicting “The Last Judgement, the Seven Acts of Mercy, and the Seven Deadly Sins” (fig. 2). The work is anonymous and may have been made by more than one artist – the upper section is superior in quality to the lower part. This representation of a Biblia Pauperum is the artwork that is most frequently requested on loan. It is the first of three paintings with this theme, commissioned by the almoners over the centuries. The second was the “Seven Acts of Mercy” in the impressive triptych by Bernard van Orley (in a depot at the Royal Museum of Fine Arts, Antwerp, and until recently on display in the Cathedral of Our Lady) and the third is in a work with Calvinist traits by Gillis I Coignet, which has vanished. Providing shelter for the homeless and care for the sick are just two of the core tasks of the OCMW, which includes the Maagdenhuis Museum, to this day. 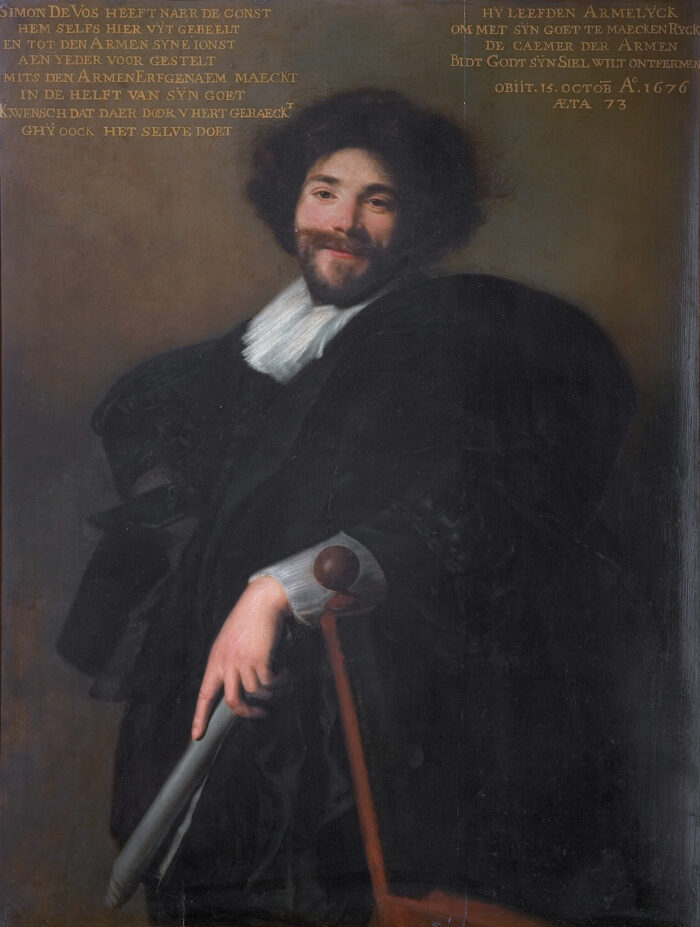 One of the most striking portraits in the Maagdenhuis Museum is the portrait of Simon de Vos by Abraham de Vries (fig. 3). The painting comes from the boys’ orphanage in Antwerp – in other words, the boys’ counterpart to the Maagdenhuis. Partly in view of the inscription at the top of the painting, applied in 1678 or 1679 (that is, after De Vos’s death in 1676), it was long believed to be a self-portrait. During restoration work in 1909, a monogram was discovered in the right corner: “FECIT AdV Anno 1635”, leading to the attribution to Abraham de Vries. The piece is remarkable for its energetic execution and understated color palette. It is one of the most charming portraits in the collection and also shows the way in which charitable institutions were seen at the time: a beautiful confluence of art and history.

The Mass of St Gregory (fig. 4) is an absolute gem, which once hung in the Poorhouse of Our Lady on Schoenmarkt. In 1987/88, Didier Martens attributed it on stylistic grounds to the Master of the Bartholomew’s Altar (c. 1450–1510). The work, which, given its horizontal format, may have been part of a predella, came to the attention of the organizers of the exhibition Jacob Cornelisz. Van Oostsanen (c. 1475–1533): The Renaissance in Amsterdam and Alkmaar. In the end it was not included in the show or the catalog, but we have since presented it as a work from the circle of this first known artist to have worked in Amsterdam. Its Northern Netherlandish origins do not appear to be disputed any longer. 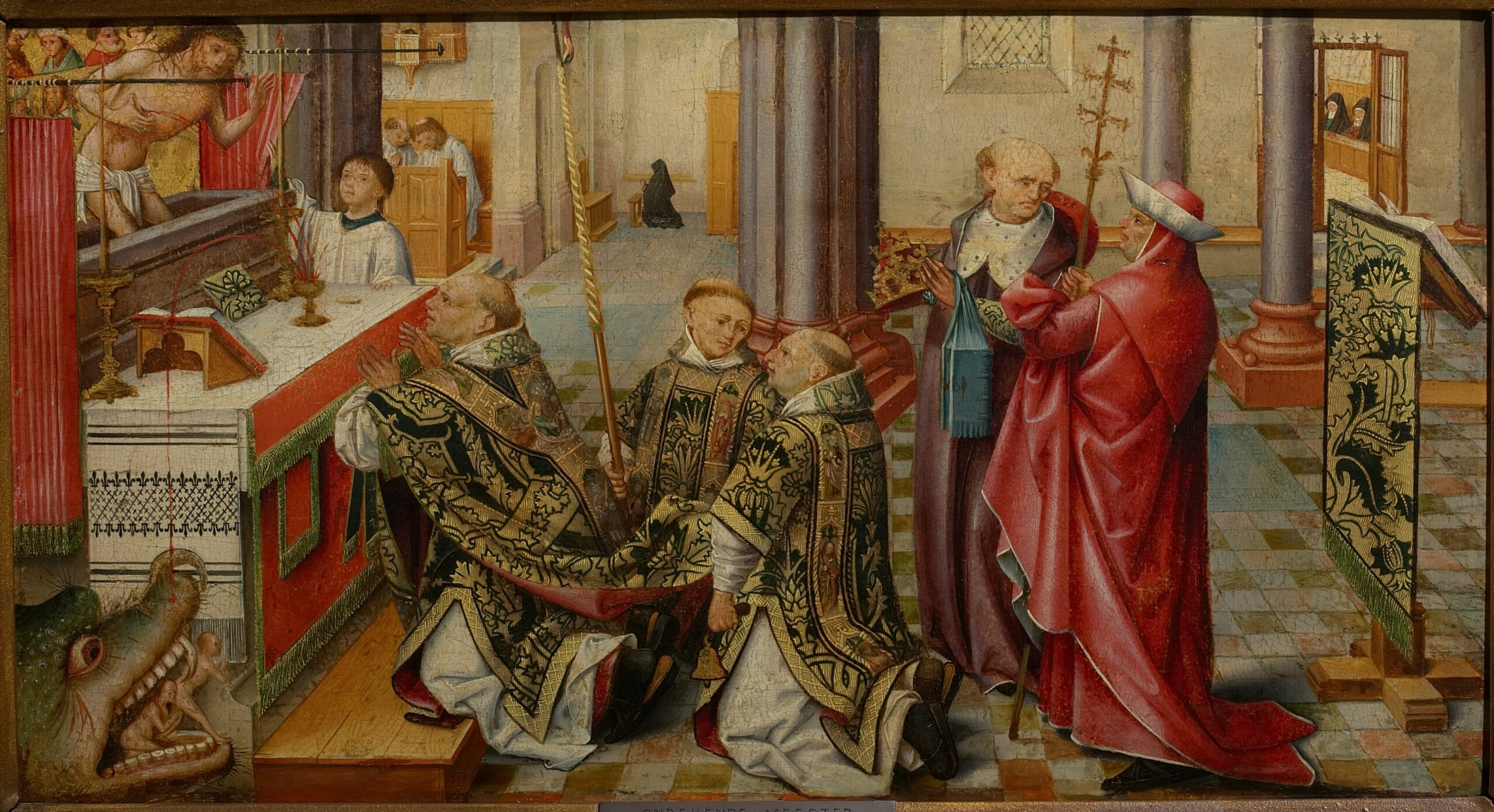 The small triptych depicting the Madonna (fig. 5) is exceptional. Its central panel is of high quality. It is almost a compilation of motifs by Rogier van der Weyden, while the illuminated background reminds us of Hugo van der Goes. The 1872 catalog mentions for the first time the name of the virtually unknown Ghent master Gerard van der Meere (? – 1512). “Anon., late 15th century” is certainly a more correct identification, but further research is needed. The two side panels, with St Adrian on the left and St Margaret of Antioch on the right, are clearly of lesser quality and are indeed later additions: it is therefore justified to refer here to a kind of “recycling.” 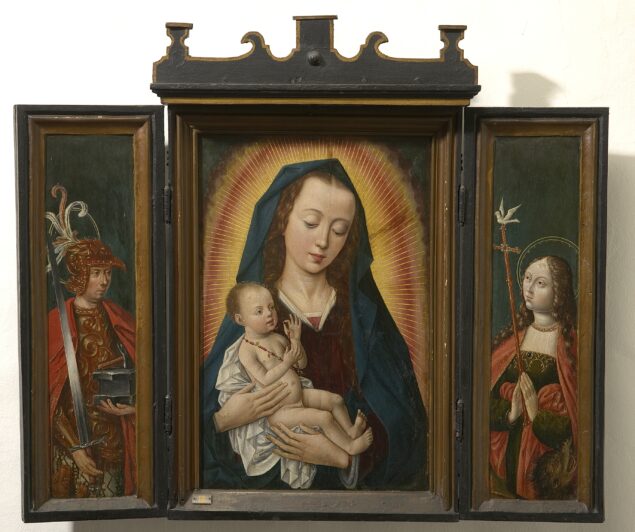 Benefactors to Charitable Institutions and the Theme of Charity

Most of the paintings in the Maagdenhuis Museum have a theme or provenance that is related to charity and the building’s past. For example, the theme of “The Dedication of Mary in the Temple” (or “Presentation of the Virgin Mary”) is represented three times in the collection, while the archival sources even refer to a silver bowl with this subject. The date of 21 November, on which the Presentation of the Virgin Mary is celebrated, was celebrated practically as the day of the institution’s patron saint, something we continue to commemorate each year. The “prefiguring” is quite clear: as Mary was welcomed by the high priest to remain in the temple, so too the orphaned girls were received by the almoners to be educated in the Maagdenhuis.

One of the artworks in the former chapel of the Maagdenhuis is the Jan van der Biest Triptych by Pieter Aertsen (1507/08 – 1575) from 1546. It is Aertsen’s first documented work and was commissioned by Van der Biest, who was a tanner and merchant. In 1504 Van der Biest converted his own home into a charitable institution providing shelter for sixteen elderly and frail women. The triptych adorned the institution’s altar, in Falconrui, Antwerp. Today it occupies a similar place in the Maagdenhuis.

The sketch depicting Christ, Protector of Orphans was transferred to this collection from the boys’ orphanage. This small panel is attributed to Rubens; some consider its authenticity to be beyond doubt. After several experts had studied the work in 2019, the decision was made to subject it to dendrochronological examination. Depicted on the left are the almoners, who are taking charge of the children and promising to raise them with all due care.

The Maagdenhuis owns a great many works whose authorship is unclear and that present interesting case studies. St Jerome (fig. 6) was long thought to be a work by the young Anthony van Dyck, but the results of research conducted in 2015 by the University of Antwerp refuted that attribution. It is sometimes linked to the name of Peter van Lint, but without any evidence. 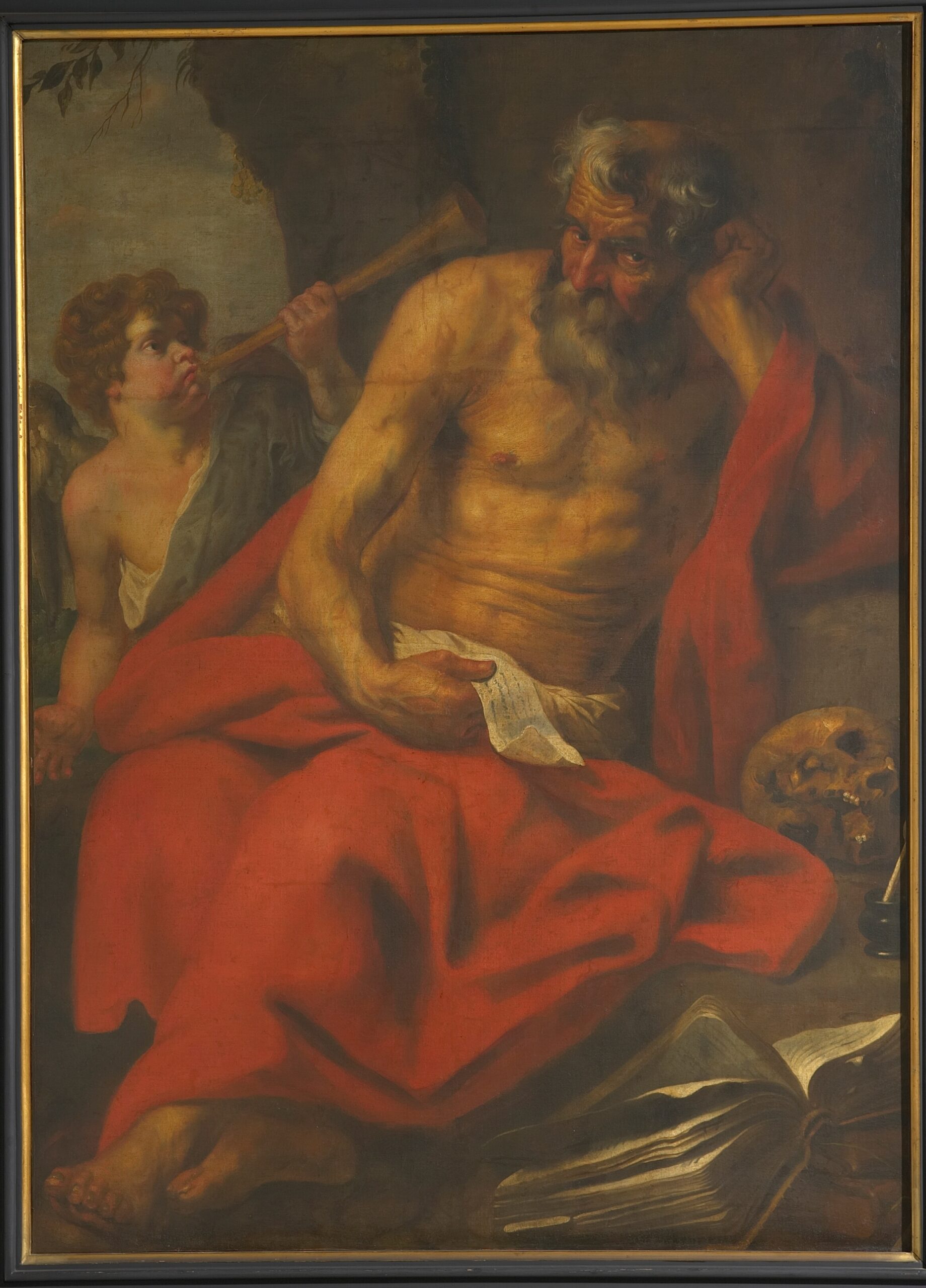 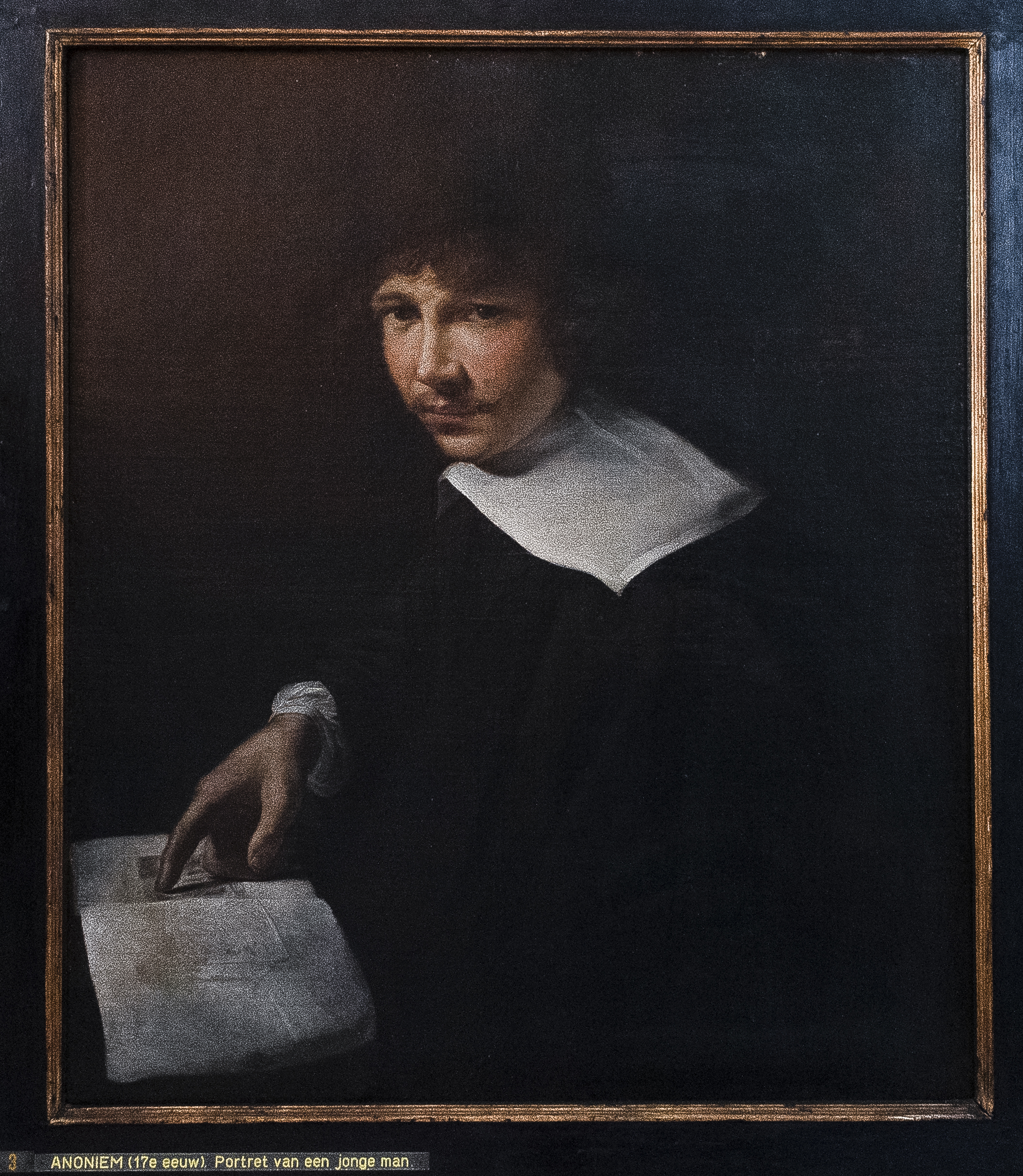 Portrait of a Young Man (fig. 7), formerly in St Elisabeth’s Infirmary, was been attributed to Frans Hals since an inventory drawn up in 1872. The inscription at upper left reads: “Out 24. A. 1635”. The painting, which probably depicts a student, is extremely dark and would certainly benefit from conservation treatment.

Daniel Christiaens is Curator at the Maagdenhuismuseum in Antwerpen.  He has been a member of CODART since 2007.