The 350th anniversary of Rembrandt’s death in 2019 will be plentifully marked by numerous exhibitions treating various aspects of the artist’s training, production, and reception. The popularity of this multifaceted master seems only to increase, and there is clearly still more to learn and celebrate about Rembrandt’s groundbreaking approach to art. In the sphere of printmaking, recent research on Rembrandt’s printing papers has revealed a great deal about his creative process, influence on the print market, and even his role as teacher in a highly active studio. Still, much data remains to be collected from impressions on European papers whose mold-imparted traits—especially watermarks—not only assist in verifying authenticity but can shed light on Rembrandt’s practice. And, in practical terms, identifying watermarks on Rembrandt impressions, and considering the implications together with indications of quality and chronology signaled by state, inking, and plate wear, remains a complex and often time-consuming task requiring specialist expertise. Some watermark types found on Rembrandt’s prints occur in upwards of a hundred different variations, complicating confident matching and interpretation despite the significant strides in scholarship on this topic. 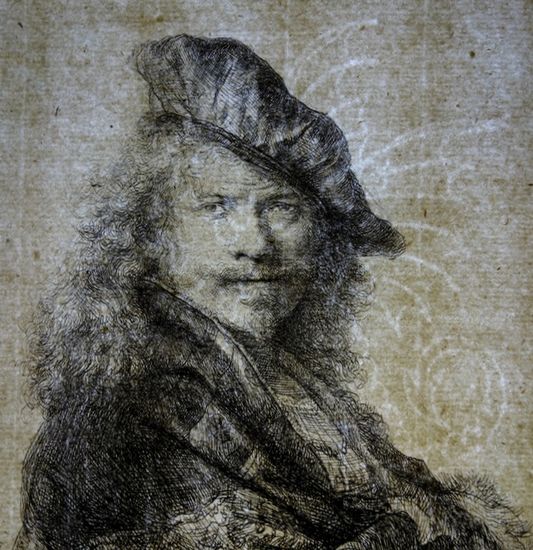 The Watermark Identification in Rembrandt’s Etchings (WIRE) Project, based at Cornell University in Ithaca, New York, is a collaborative undertaking offering a technical approach to expand our understanding of Rembrandt’s papers. Directed by Andrew C. Weislogel, a curator at Cornell’s Herbert F. Johnson Museum of Art, and Cornell engineering professor C. Richard Johnson, Jr., its initial objective is the development of an interactive online interface enabling curators, academics, and collectors to quickly and confidently identify the many variations of watermarks within the fifty-odd visual categories currently known in Rembrandt’s printed oeuvre. The project builds upon the wealth of watermark scholarship begun by Nancy Ash and Shelley Fletcher and magisterially expanded and interpreted in Erik Hinterding’s 2006 study Rembrandt as an Etcher: The Practice of Production and Distributionand incorporated into the 2013 New Hollstein Rembrandt catalogue.

As Hinterding’s research revealed, the identification of specific paper batch-mates in Rembrandt’s prints through the matching of sheets with the exact same watermark (called moldmates) or sheets bearing the near-identical watermarks from pairs of molds used in the papermaking process (known as “twins”) allows the dating of specific impressions, helps define the time-span of plate changes, reveals when Rembrandt reprinted older plates, and helps distinguish lifetime from posthumous impressions. Since the fall of 2015, the WIRE project has proceeded as a series of cross-disciplinary teams led by Weislogel and Johnson, in which students learn how these quantifiable paper characteristics contribute to an understanding of Rembrandt’s printmaking and to the development of an online identification interface. 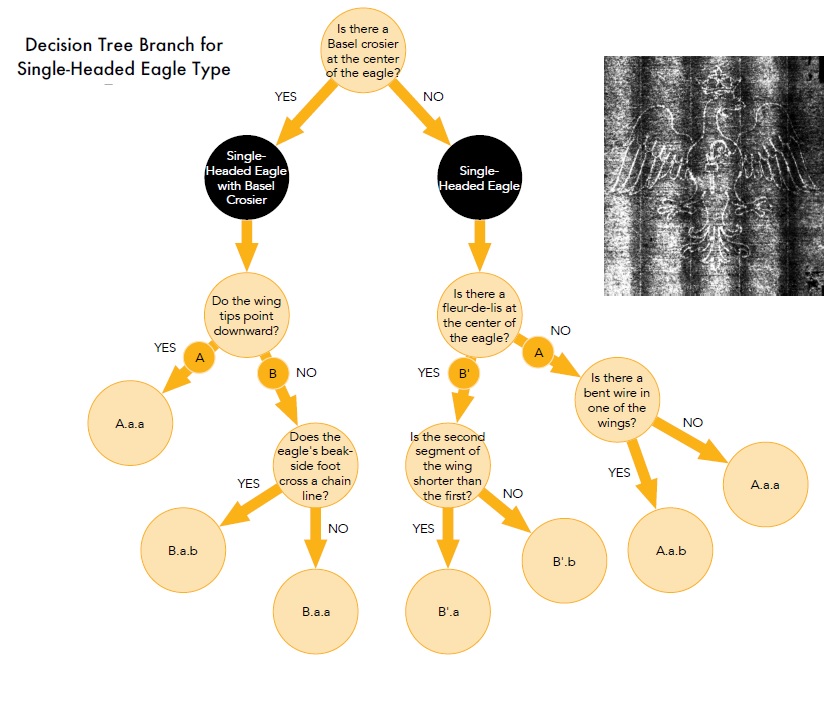 This interrogatory interface is based on the concept of the decision tree (fig. 2), a branching graph that leads the researcher through a sequence of yes or no questions about visual watermark descriptors to the correct watermark match. To build decision tree “branches” based on Hinterding’s taxonomy, WIRE students under supervision from Weislogel and Johnson study all the variations of a given watermark type, noting and describing visual features that conclusively differentiate each one from all the others. In this process, they leave aside questions of scale, which can vary depending on the image being compared, in favor of quantifiable differences of relative number (e.g., the number of bells on a fool’s cap), relative size of features, orientation of the watermark, and especially its position with respect to its adjacent chain lines (lines imprinted on the paper by the row of vertical chain wires on the paper mold). Once developed and vetted, these decision tree branches are then coded into the online identification interface. 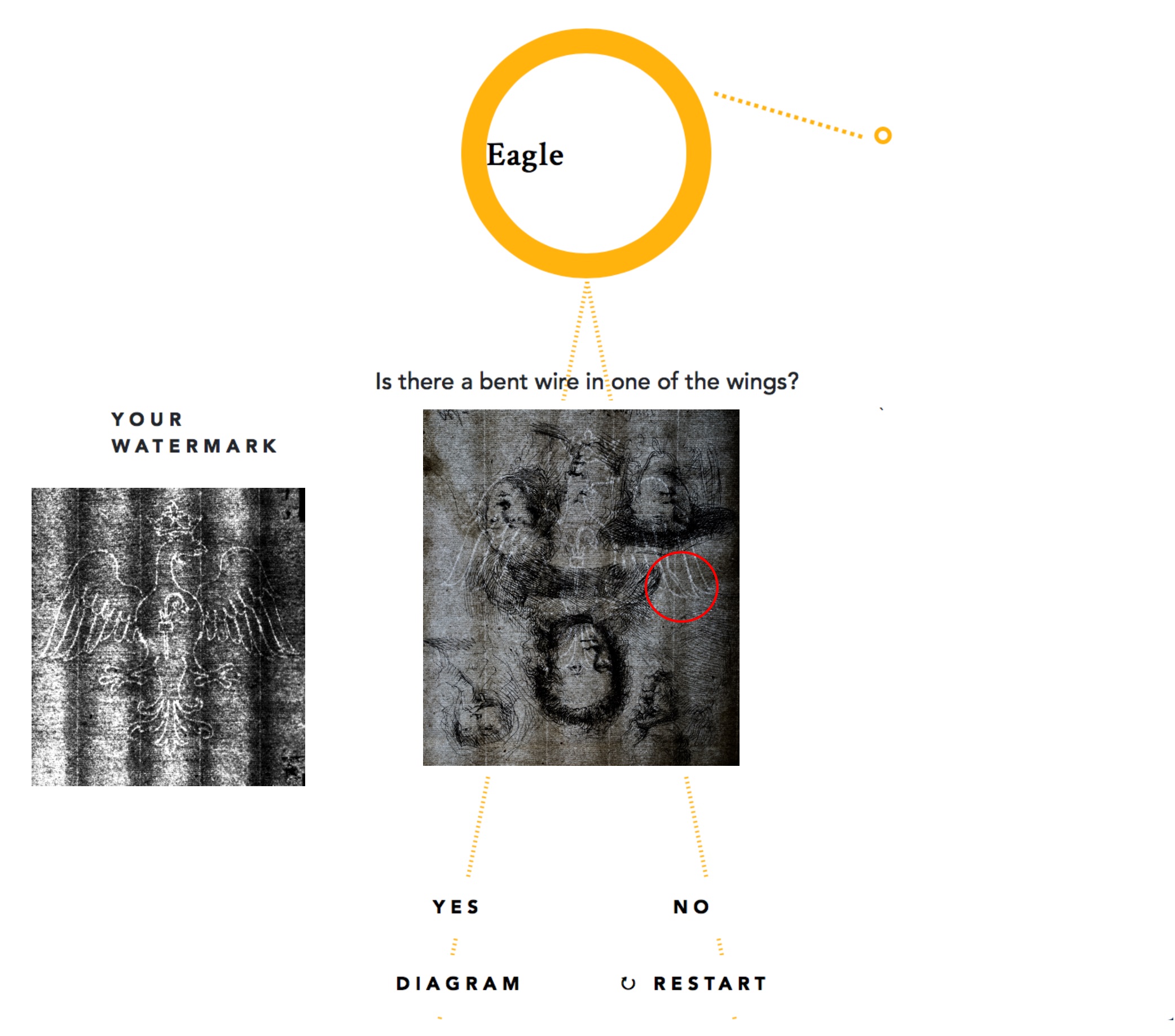 To work the interface (fig. 3), the outside user uploads a photograph of their sought watermark for comparison and is offered a short series of questions supported by watermark images visually annotated to clarify differentiating features. These question-and-image pairings steer the researcher to a match and a listing of that watermark’s unique visual characteristics, to enable final confirmation. Having identified the correct watermark subvariant, the researcher can then refer to information in Hinterding’s study about the particular features of their paper, including its approximate date, other impressions of the print found on this same paper, and other plates also printed on it. This interface, with its capability for side-by-side, magnified digital comparison of watermark images, is designed to streamline the identification process and reduce the potential for error that arises when comparing an original print to the watermark illustrations in the book. In addition to the efficiency of the decision tree feature, the WIRE project is developing additional enhancements, such as 1) a tool to compare chain line spacing and overlay watermark images as further proof of a match, and 2) an illustrated glossary of watermark terms and features to aid in visual differentiation.

The project developed in tandem with the organization of the 2017–18 traveling exhibition Lines of Inquiry: Learning from Rembrandt’s Etchings organized by Weislogel and Andaleeb Badiee Banta, then curator of European art at the Allen Memorial Art Museum at Oberlin College in Ohio. The holdings and the generous staff of partner museums and galleries, including those of Yale, Princeton, and Harvard Universities, and many others who also lent to the exhibition, are helping to drive the project’s next goal, that of constructing a database of newly captured watermark images from American collections. As a first step towards this database, WIRE watermarks newly catalogued through the WIRE project appear as an appendix in the Lines of Inquiry exhibition catalogue. And, when the online interface is made available, individual user-uploaded watermark images will also be incorporated into the database. 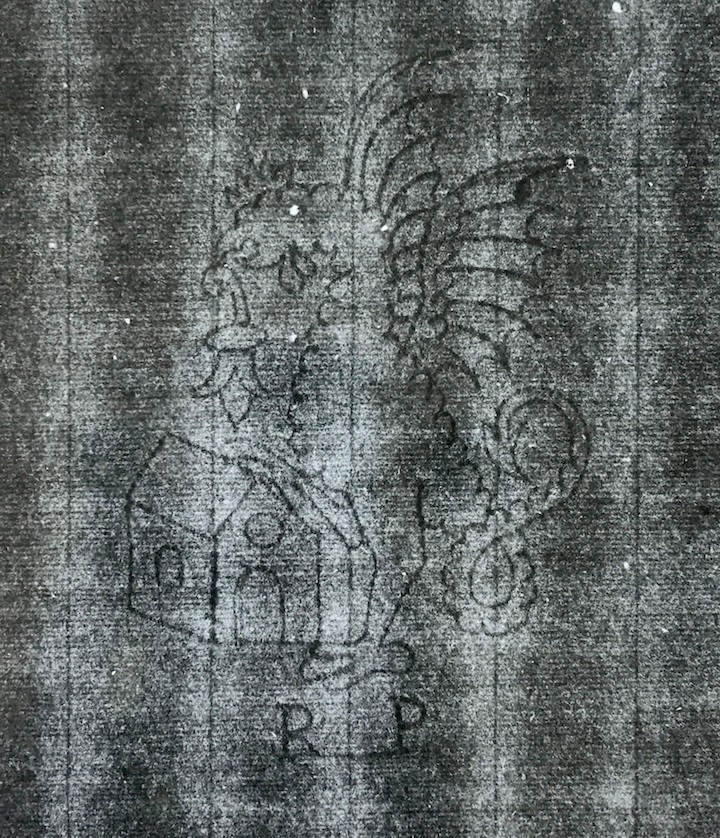 In its efforts to continue enlarging the store of Rembrandt watermark images, the WIRE project has initiated the practice of generating reports for partner institutions, cataloguing new instances of watermarks on their prints and noting their dating significance as an aid to the staff of these museums where desired. In the process, the watermarks brought to light on these new impressions have continued to both confirm and expand the picture of Rembrandt’s paper batches and edition sizes, and have augmented the census of surviving impressions of individual prints. For example, the project has added several new examples to the already large batch of paper marked with a Basilisk watermark (figs. 1, 4) that Rembrandt seems to have used continually between 1641 and 1647, on which approximately seventy impressions including examples of Self-Portrait Leaning on a Stone Sill (1639; fig. 1), The Hog (1643), Ephraim Bonus, Jewish Physician (1647) were previously counted. This research has also yielded several watermarks not seen before on Rembrandt’s papers, each likely signaling a heretofore unknown print edition, such as the Johnson Museum’s impression of Self-Portrait with Plumed Cap and Lowered Saber of 1634 (fig. 5). In selected cases, WIRE project research has identified a new twinmark for a given batch, assuring that future impressions found with those marks will be linked to helpful and accurate existing dating information. WIRE has also begun to reunite countermarks (subsidiary watermarks found on the other half of the paper) with their associated main watermarks from sheets of paper cut in half prior to printing.

In addition, the situation of numerous as yet unexamined Rembrandt impressions in smaller museums, many of which do not own radiographic equipment or employ technical staff, has encouraged investigations by a related American consortium of conservators, conservation scientists, and engineers into safe and inexpensive imaging tools that could be shipped to these institutions along with instructions for the systematic capture of new paper data. Furthermore, initial evidence of potential matches between papers used for Rembrandt prints and those on which prints and drawings by Rembrandt pupils appear is opening avenues for new research on work from related contemporary artists, such as Ferdinand Bol, a successful Rembrandt student who was also an accomplished etcher. These developments presage further insights into the workshop practices of Rembrandt the teacher. 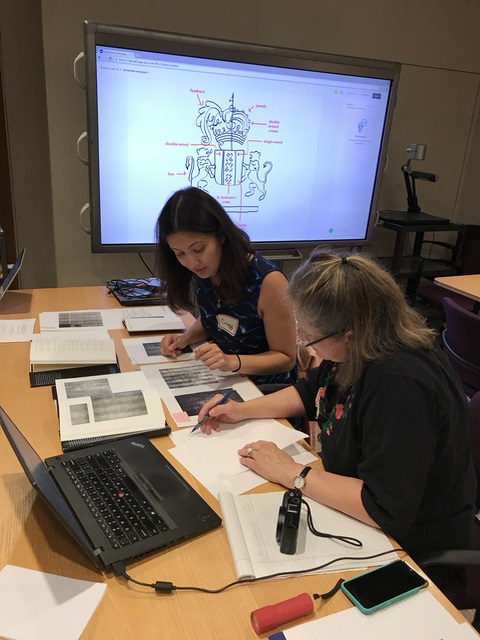 Fig. 6: Casey Lee (left) of the Getty Museum and Theresa Fairbanks-Harris (right) of Yale University Art Gallery, participants in the NEH WIRE Summer workshop, June, 2018, work on the decision tree branch for the Arms of Amsterdam watermark. An annotated image with glossary terms appears on the screen.

The WIRE project is supported by a generous grant from the National Endowment for the Humanities (NEH); with this assistance, the resulting online watermark interface will be made freely available once fully tested, and the code for the website will remain open source for adaptation by related applications requiring consistent visual differentiation of medium size datasets. In June 2018, with NEH support, Weislogel, Johnson, and Brittany R.R. Rubin, print room curatorial assistant at the Johnson Museum, along with guest presenters Stephanie Dickey, Bader Chair of Northern Baroque Art at Queen’s University, and Michele Hamill, paper and photograph conservator, Cornell University Library, hosted a week-long workshop on the WIRE project (fig. 6). The participants, ranging from undergraduate and graduate students to early-career prints and drawings curatorial staff and experienced paper conservators, studied historic papers, and learned the fine points of identifying watermarks and cataloguing prints according to the latest sources. Participants tested and refined existing WIRE decision tree branches for previously completed types by cataloguing a fresh group of beta radiographs from Rembrandt prints in the Cleveland Museum of Art. They also developed a decision tree branch for the large Arms of Amsterdam watermark, that occurs on Rembrandt’s prints of the mid-1650s and onward. For participants and organizers alike, among the key lessons of this workshop was the continued importance of dialogue among curators, academics, conservators, and technical staff to continually test the hypotheses underlying Rembrandt watermark study, crucially blending print connoisseurship, historical context, and paper knowledge. We hope that ongoing research will continue to enrich understanding of Rembrandt’s printing chronology and relationships with his contemporaries. Finally, we welcome inquiries from CODART members interested in learning more about the project, or wishing to pose watermark questions on which we may be of assistance.

Andrew C. Weislogel is the Seymour R. Askin, Jr. ’47 Curator of Earlier European and American Art at the Herbert F. Johnson Museum of Art, Cornell University. He has been a member of CODART since 1999.

The WIRE project is advised by:

Please see CODART’s Rembrandt Year 2019 page to see all special exhibitions and events that are organized to celebrate the life and works of this remarkable Golden Age painter and his contemporaries.