The permanent collection of the Spencer Museum of Art was founded in 1917 when Kansas City art collector Sallie Casey Thayer offered her collection of nearly 7,500 art objects to the University of Kansas to form a museum “to encourage the study of fine arts in the Middle West.” There were no significant prints from the Low Countries in this founding gift but a number of Netherlandish prints, whose source is unknown, were presumably already at the university and are now part of the museum’s collection. These include, for example, Pieter Schenk’s etched view of Panama and 37 undistinguished impressions of Anthony van Dyck’s Icones Principum Virorum, including the title page but lacking the famous etching of Erasmus of Rotterdam.

The collection of prints began in earnest with two major donations from the Max Kade Foundation in 1969 and 1977. These included five of our six Lucas van Leyden engravings, two Israhel van Meckenem engravings, Rembrandt’s renowned large drypoints (The Three Crosses and Christ Presented to the People, White and Boon iv/v and v/viii, respectively), and many Renaissance prints, most notably by Albrecht Dürer and Marcantonio Raimondi.1

The subsequent growth of the collection has been stimulated by additional gifts and many purchases to support specific pedagogical goals and thematic exhibitions. The pedagogical goals were initially driven by the courses in 17th-century Netherlandish art offered by Professor Linda Stone-Ferrier and my own classes in Print History and Print Connoisseurship, but our dedicated room for teaching from the collection of prints, drawings and photographs now hosts classes from nearly every discipline taught at the university. 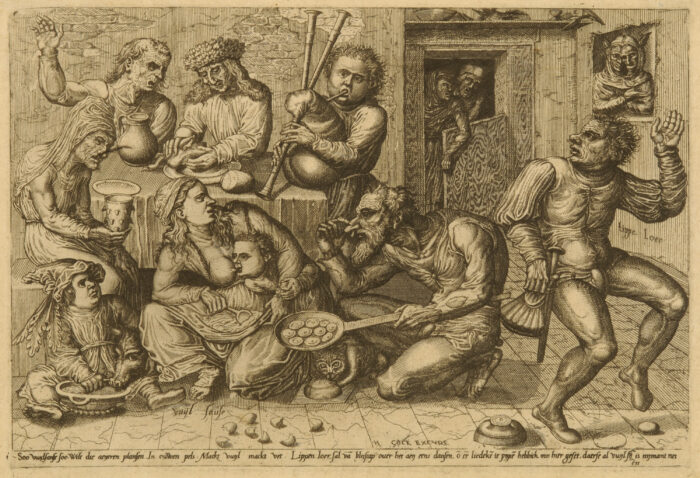 One of our initial goals was to be able to tell the important story of print publishing in the Low Countries. For this purpose, focusing on Hieronymus Cock and his Antwerp publishing firm, In de Vier Winden / Aux Quatre Vents, was a clear place to start. We now have 19 works published by Cock, including three of his own etchings of Roman ruins, and a good representation of the range of subjects issued from the Vier Winden including secular subjects after Pieter Bruegel the Elder, a village feast after Hans Bol, architectural subjects after Hans Vredeman de Vries, landscapes after Lucas Gassel and the Master of the Small Landscapes, ornament sheets after Cornelis Floris II, a biblical series after Maerten van Heemskerck, and a low-life scene derived from Rederijker lore after Frans Verbeeck (fig. 1). Treatment of publishing houses is also represented by a portrait of Cock’s widow, Volcxken Diercx (who continued the business), by Hieronymus Wierix, and a work published by Philip Galle, Karel van Mander’s series treating Aesop’s fable of The Man, the Son, and the Ass.

The establishment of dynastic families of printer-publishers is an important outgrowth of mid-century publishing houses and is now represented in the Spencer Museum by works from the Sadeler, Wierix, and Van de Passe families. Two prime examples of these are the justifiably famous double portrait, Bartholomaeus Spranger and his Wife Christina Müller, by Aegidius Sadeler II; and Johan Wierix’s deft copy after Albrecht Dürer’s Melencolia I. 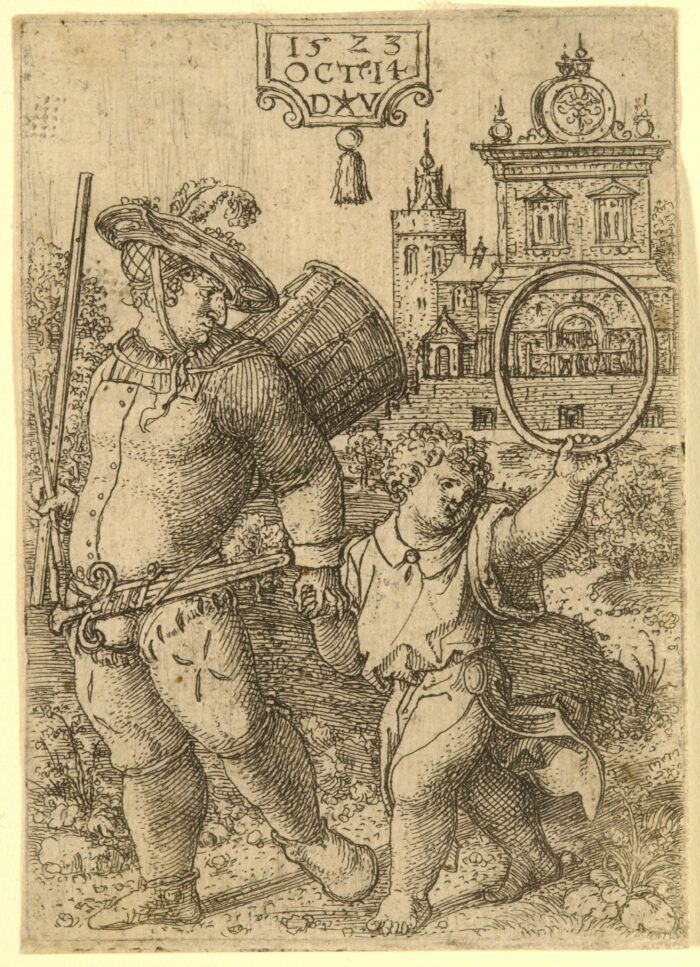 The Spencer also aspires to represent the early story of printmaking in Antwerp prior to Hieronymus Cock’s activity. While hardly adequate, three works have entered the collection that begin to address this need: The Creation of Eve in a Mandala with God and the Four Winds by The First Antwerp Woodcutter (c. 1487), Dirk Vellert’s lovely etching Drummer with a Child Holding a Hoop (1523, fig. 2), and an engraving by Cornelis Massys, The Beggars’ Repast (1539).

Aside from the history of print publishing in the Low Countries, the Spencer Museum collections have significantly grown through carefully-selected specific monuments in printmaking and works by individual artists. A bound copy of Pieter Coecke van Aelst’s series, Les moeurs et fachons de faire de Turcs (Mores and Fashion of the Turk) is a good example of the former. This work, given its considerable cultural valency and relevance, is heavily used in the museum’s teaching mission for classes dealing with a large variety of issues, from religious studies to geography and history (fig. 3). Similarly, a print like Harmen Jansz. Muller’s The Henpecked Husband, c. 1595, in which the husband’s wife wears the pants in the family, offers points of connection with contemporary issues concerning gender roles.

The museum’s longtime focus on collecting the work of individual artists particularly significant to the history and development of printmaking has also shaped the collection. Thirty-five years ago, the remarkable career of Hendrik Goltzius was represented at the Spencer by the 1596 engraving of the Pietà, two of the three engravings from the 1596 series of Minerva, Venus and Juno, and the masterful 1594 Circumcision of Christ in the manner of Albrecht Dürer from the Life of the Virgin series. While an excellent start, we set as specific goals the acquisition of the remaining five engravings of the Life of the Virgin, given its importance in the history of printmaking and due to the towering achievement of producing a series of six large-format tour-de-force engravings each in the manner of another artist. This was achieved in 2004 and in 2011 we addressed the need of a Goltzius chiaroscuro woodcut with the acquisition of his Demogorgon in the Cave of Eternity (c. 1588). 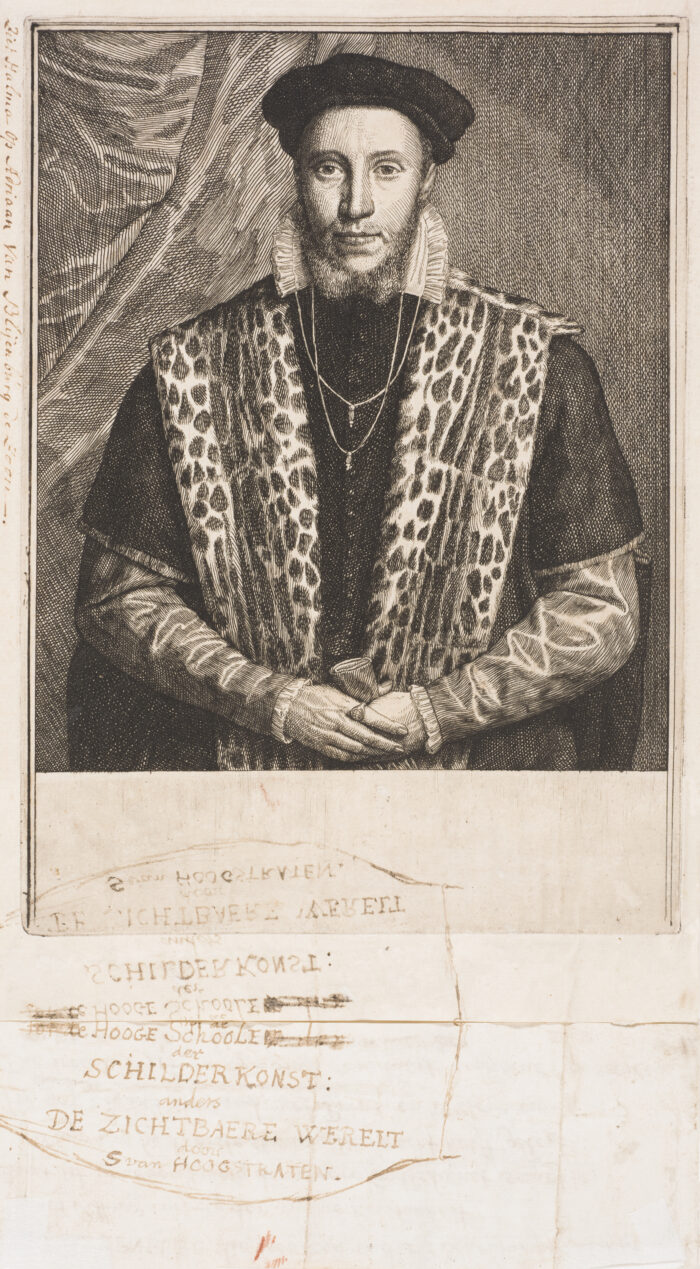 Similarly, while the Spencer’s collection has long included several major works by Rembrandt, we did not until recently have one of the artist’s important landscapes. We were lucky to be able to acquire his Landscape with a Cottage and a Large Tree (1641) in 2014. Other important printmakers who have entered the collection include Hendrik Goudt, Nicolaes de Bruyn, Gerard de Lairesse, Cornelis Dusart, Cornelis Bega, and Samuel van Hoogstraten (fig. 4).

The Spencer’s collection has also grown significantly through the purchase of prints in support of exhibitions. While this takes us into the modern era, it may be of interest to CODART members. In 1993 we organized the exhibition Les XX and the Belgian Avant-Garde: Prints, Drawings, and Books, c. 1890.2 In preparation for this exhibition we not only arranged significant loans, but acquired works as well, building on our holdings by James Ensor and acquiring our first works by Frantz Charlet, Max Elskamp, Alfred William (Willy) Finch, Henry de Groux, Fernand Khnopff, Armand Rassenfosse, Férnand Rops, Jan Toorop, Théo van Rysselberghe, and Henry van de Velde as well as some loose gatherings of the albums of the late nineteenth-century Antwerp etching society, De Vereeniging der Antwerpsche Etsers. 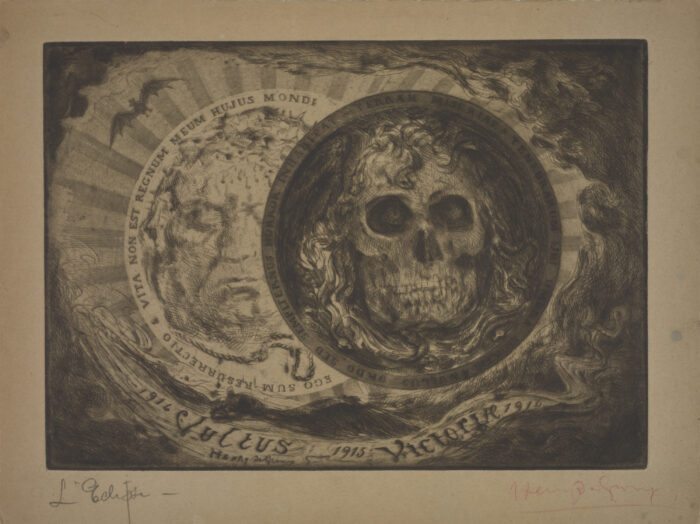 In 1996, when we organized the exhibition, An Eye on Flanders: The Graphic Art of Jules De Bruycker, we took the opportunity to add several works by this late-nineteenth and early-twentieth-century Antwerp-based artist.3 Notable among these is the artist’s own impression of Ieperen de Slechte Maere (Ypres–the Grim Reaper), a 1916 etching of the Grim Reaper striding before the burning tower of the cloth hall in Ypres during the First World War. The scene captures the moment that the bell falls from the burning bell tower.

While examining a German private collection we were offered the opportunity to purchase a group of fifty-seven prints by Henry de Groux, the great majority of which were working proofs for the artist’s 1916 First World War etching portfolio, Le Visage de la Victoire (fig. 5).4 These, combined with the previous purchases for the Les XX exhibition and a large number of lithographs by the same artist concerning the First World War donated to the museum by the late Eric Gustav Carlson, have raised our De Groux holdings to 92. 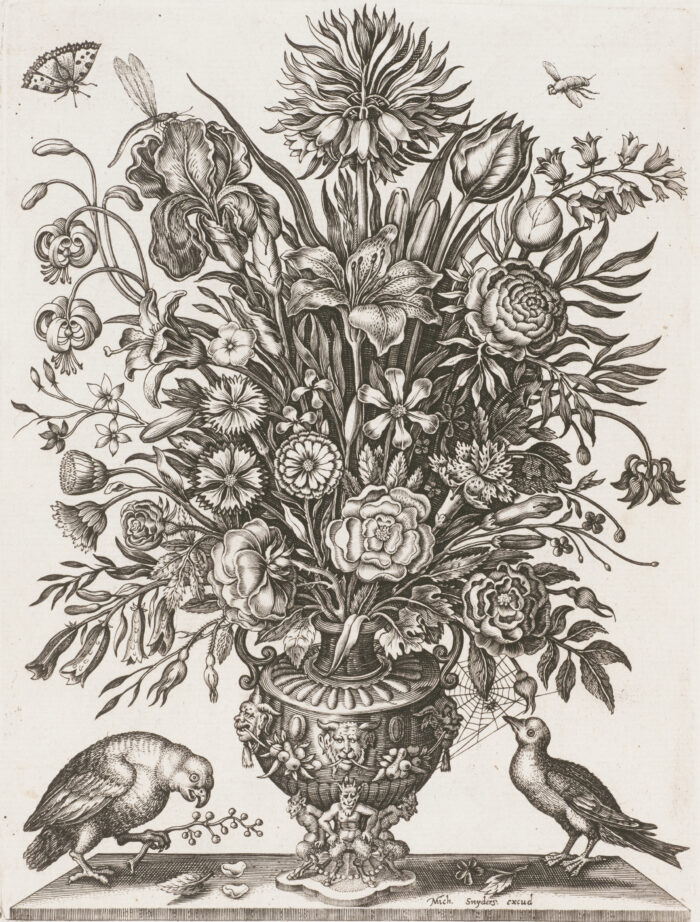 This gives a rough impression of the contours of the Netherlandish print collection at the Spencer Museum of Art, although there are many others, as disparate as Pieter Dupont’s Portrait of Steinlen6 and Rainer Vinkeles’s 1801 etching and engraving (after Pieter Barbiers II), The Felix Meritis Hall of Physics in Amsterdam, in which J.H. van Swinden and his assistant demonstrate an electrical machine in front of a large audience.

All of these prints find broad application in our teaching mission, thanks to the multitude of subjects and concerns addressed by printmakers active in the Low Countries.

Stephen Goddard is Curator of Prints and Drawings at the Spencer Museum of Art in Lawrence, Kansas, USA. He has been a member of CODART since 1998.

1 With a few exceptions, the collection is online and illustrated on our website: https://www.spencerart.ku.edu/collection