The Papevleugel of the Lakenhal was reopened today, 25 November 2006, after a 15-month renovation. The inaugural exhibitions show work by present-day Dutch artists inspired by Rembrandt. The Lakenhal is the hosting museum for the CODART NEGEN congress next March, Dutch and Flemish art in the land of Rembrandt.

After being closed for renovation since 17 August 2004, the temporary exhibitions wing of Stedelijk Museum De Lakenhal, the Papevleugel, was reopened today. This part of the building was erected in 1923. Because it no longer met present-day standards for museum galleries, it was renovated with new light and climate control systems as well as improved facilities for fire prevention and visitor safety.

The €3.5 million renovation was undertaken in preparation for the Rembrandt year in 2006, when the museum expects a large burst in attendance. De Lakenhal will celebrate Rembrandt’s 400th birthday with three exhibitions, of which the first, Rembrandt’s mother, will be on display during the CODART NEGEN congress in March. Participants in the congress will also be able to visit the museum’s ultramodern new storage facilities for paintings and applied art.

Stedelijk Museum De Lakenhal has added some noteworthy new acquisitions and long-term loans to its display. On loan from the Rijksmuseum, for the duration of its own renovation, is an outstanding selection of 25 paintings, including Frans Post’s large Brazilian landscape of 1652. The Centraal Museum has loaned its monumental Relief of the siege of Leiden (1830) by the Belgian artist Gustave Wappers. 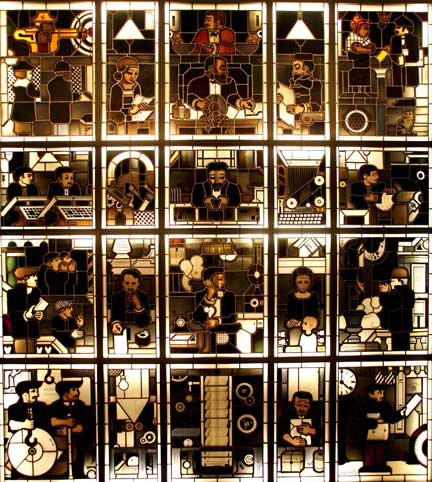 A spectacular new acquisition is also being presented today: a vast tableau in stained glass by the Leiden artist Harm Kamerlingh Onnes. The twenty panels depict the twenty different kinds of activity involved in making a newspaper, from office work to writing to photography to printing and distribution. It was made for the Amsterdam daily Algemeen Handelsblad in 1928, to mark the 100th anniversary of the newspaper. After the merger with the Nieuwe Rotterdamsche Courant, the building was closed and the decorations removed. Thought to have been lost, the glass panels were discovered last year at a wrecker’s in Friesland. The museum was able to acquire this major work by an artist to whom it has devoted exhibitions in the past and with the aid of the Friends of De Lakenhal to restore and mount them.

The Mondriaan Foudation helped the museum acquire from a private owner about 300 pieces of earthenware from the Amphora plant in nearby Oegstgeest, most of them designed in the period 1900-25 by Chris van der Hoef.

From its own cellars, De Lakenhal was able to retrieve another treasure of Leiden art history. In 1812 the artist, art historian and museum director D.P.G. Humbert de Superville brought to Leiden a cast of the Laokoön, to serve as a showpiece in the ideal museum he wished to found there. It has long been off view, gathering dust, but newly restored it adds renewed glory to the present-day Lakenhal.

The reopening of the Papevleugel connects past and present in yet another form. Two exhibitions are being opened there by living Dutch artists who were inspired by Rembrandt: Cees Krijnen, Mother, fiction or fact, will be on show until the closing the exhibition on Rembrandt’s mother on 19 March 2006. Honestly stolen from the experience of a lifetime by Ritsaert ten Cate, a series of photo portraits made up of shots of Rembrandt self-portraits, will be up all year. Both exhibitions mark the start of a whole year of exhibitions of work by modern artists inspired by Rembrandt.