Detail of the angel from Madonna at the Fountain (left Antwerp, right New York)

After six years of research crowned by a European prize, the Royal Institute for Cultural Heritage (KIK-IRPA, Brussels) has just published the last high-resolution images on Closer to Van Eyck, completing the VERONA project. The new images are of Léal Souvenir (or Portrait of a Man) from London (National Gallery), Saint Jerome from Detroit (Institute of Arts), Saint Francis from Philadelphia (Museum of Art) and Madonna at the Fountain from New York (private collection). All four of these paintings were on display at the large Van Eyck exhibition in the Ghent Museum of Fine Arts in 2020. Shortly after the first wave of the pandemic and just before they were packed and flown back to their owners, KIK-IRPA was able to examine and document the paintings.

The Closer to Van Eyck website is dedicated to the restoration of the Ghent Altarpiece, but also features the complete oeuvre of Jan van Eyck, his studio and his followers. Initially started in 2011 to assess the condition of the polyptych, the website has come a long way since then.  After the first stage of conservation treatment (on the exterior panels) was finished in 2017, high-resolution images in different modalities and extreme resolutions were integrated into the website. A new viewer was introduced, allowing for the comparison of three images simultaneously. After the second stage (the lower register of the interior) was finished in 2020, all images of the treatment, the restoration reports, exhaustive bibliography and educational videos were added. The images of the restoration’s third phase (the upper register of the interior) will be incorporated when these become available. 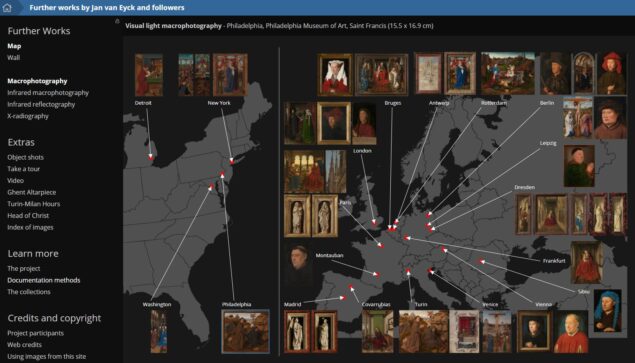 It is now possible to zoom into this rich new visual material online and savor the tiniest details as well as discovering the layers below the paint surface with the help of radiography and infrared reflectography. For the minutely painted works of Jan van Eyck, this is not only a feast for the eyes. The website is also a unique tool to probe the sometimes thorny issue of attribution Bart Fransen of KIK-IRPA explains: ‘There are several versions of some compositions. For the very first time, we can now compare them in the minutest detail on the basis of equivalent visual material, because all the paintings were photographed according to an identical protocol and with the same equipment.’ 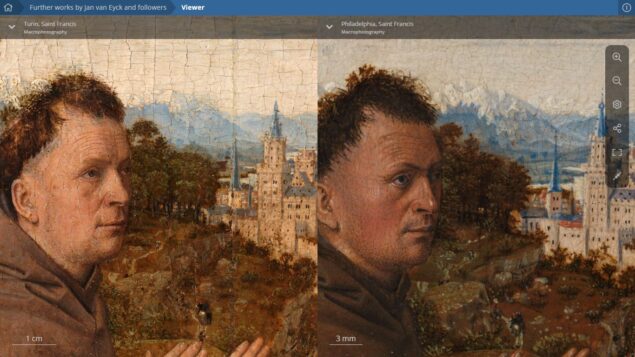 There are two versions of Saint Francis, one in Turin (Galleria Sabauda), the other in Philadelphia. They differ in size, but the degree to which some details match, down to the smallest touch of paint, is extraordinary. There are also two versions of Madonna at the Fountain, one in Antwerp (KMSKA) and one in New York. Bart Fransen: ‘In the long run, you end up playing the game of spot the difference. Comparative research may have become simpler, but the interpretation of similarities and differences is still a subject of much debate.’ 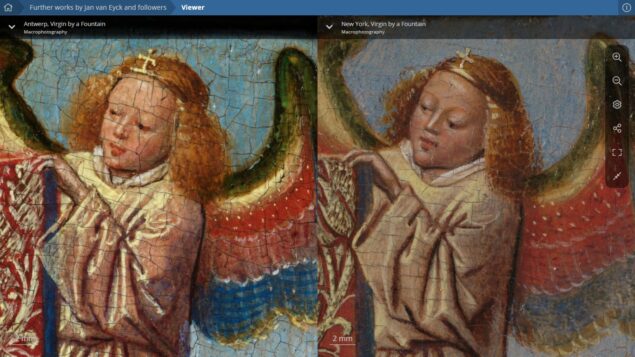 Detail of the angel from Madonna at the Fountain (left Antwerp, right New York)

Also new on the website are photos of the reverse sides of all the paintings. These usually remain hidden from the museum visitor. Sometimes they contain old labels identifying former owners, or they offer insight into the structure of the wooden panel. But often they are also painted with imitation marble or porphyry and show paint splatters, which in close-up are even reminiscent of Jackson Pollock’s paintings. 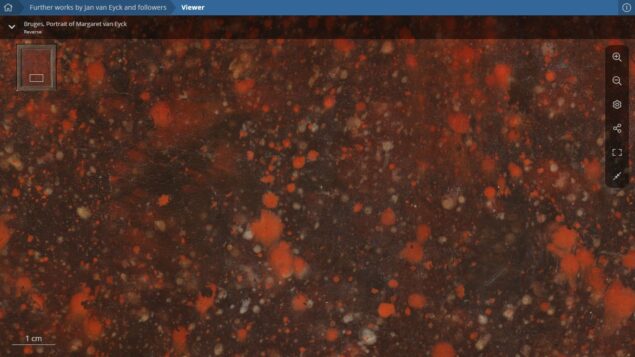 Reverse side of Portrait of Margaret van Eyck , 1439 Groeningemuseum, Bruges

It is precisely by zooming in on the paintings of Van Eyck that we can fully appreciate their true beauty. On 28 January, after the dramatic fire at BOZAR, the exhibition Facing Van Eyck. The Miracle of Detail reopened. It is extended until 14 March 2021.