Ger Luijten, the director of my institution, passed away on 19 December 2022. His sudden and untimely death caused us so much grief that CODART and I decided not to publish my portrait as “Curator in the Spotlight” on 20 December 2022. Instead, a beautiful memorial portrait of Ger was published on the site.

But Ger was very proud and happy for me that I had been selected by CODART for this feature. I would like to dedicate this page to Ger Luijten, whose inspiring presence as a director has been so important to me for the past twelve years.

I am delighted and honored to have been chosen for the “Curator in the Spotlight” feature and to be sharing the podium with the Fondation Custodia, Frits Lugt Collection – this very special institution where I have been working for the past fifteen years. The path that led me there was long, quite tortuous but rich in experience. It started in Cologne, Germany, where I studied law since I initially intended to become an auctioneer in France – a position that required a law degree at the time. After completing my master’s degree in German and French law, I studied art history at the University of Paris X-Nanterre. In the course of a long and fruitful internship at the Jean-François Heim Gallery in Paris, I came to realize that what really drove me was not wanting an active role on the art market, but a desire to conduct research on all those beautiful works of art that passed through the gallery on their way to museums and private collections. My ambition crystallized: what I wanted was to gain a position as a university researcher.

After my Master’s thesis on the French pastel portrait of the eighteenth century (analyzing its stunning development, informed by the art theory of the time and semiotics), I decided to specialize in Dutch art of the seventeenth century. I had two reasons: first and foremost, I was in awe of the quality, variety, and inventiveness of the Northern Netherlandish artists’ work. But I also had a tactical reason: at the time, there were no scholars in this field at French universities. My PhD mentor, Professor Christian Michel, advised me to find a Dutch supervisor for my doctoral research in the Netherlands. When I approached Professor Eric Jan Sluijter in 1999, he was enthusiastic about my plan to study the teaching of drawing in Dutch studios in the period 1600–1680. I applied for a position as a research trainee (Dutch: AIO) at Leiden University. This became my first real job in art history. 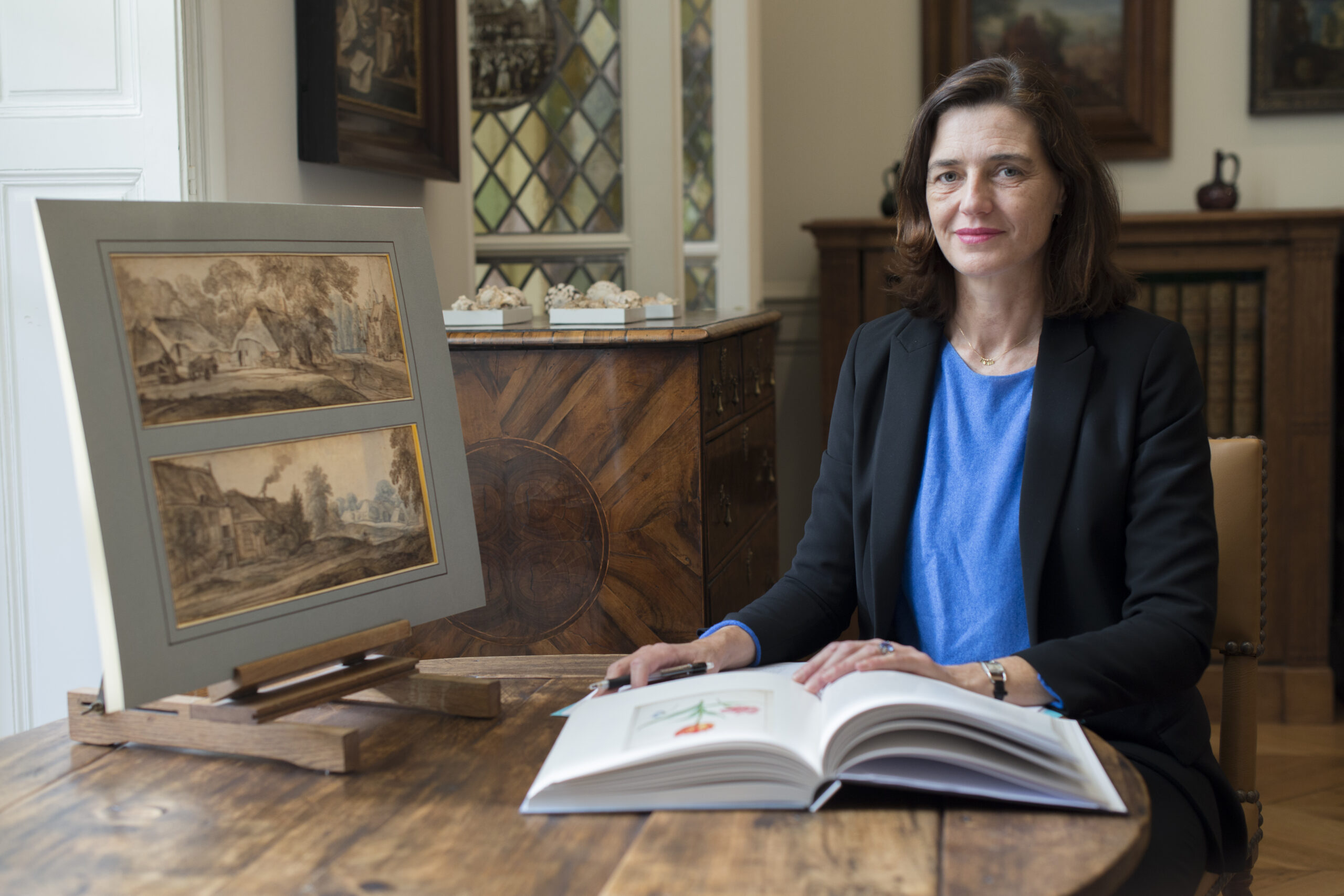 The new position meant three important things: I was to write my dissertation at this famous Dutch university, under the supervision of Prof. E.J. Sluijter, in the lovely city of Leiden; I was able to use the university’s rich collection of prints and drawings for my classes; and I became part of the Art History Research School (OSK). This provided a unique opportunity to meet with many other PhD students, who are now my colleagues at universities and museums – and of course fellow CODART members.

When my four-year contract at Leiden University came to an end, I still had not completed my dissertation – and I persuaded myself that I would be able to finish it while working full-time at a museum. My dear colleague Jef Schaeps, curator at the Leiden University Print Room, had told me the Fondation Custodia was looking for an assistant curator and suggested this would be an ideal position for me: a Dutch environment with a great collection of Dutch art, in the heart of Paris.

When I embarked on my two-year contract in January 2007, I did not realize that I was following a well-trodden path: many of my Dutch colleagues had also started their careers at a museum before completing their doctoral dissertation. Nor did I predict that I would fall in love with the curatorial work. Instead of an interesting work experience while completing my PhD, this position was to become the job of my life! But I still do love teaching and this is one of the things I enjoy about working at the Fondation Custodia: we often welcome groups of students with their lecturers or professors from Dutch, Belgian, and French universities and art schools and provide classes in our specialist fields, especially in the graphic arts and the Netherlandish schools.

Jef Schaeps was right: working for the Fondation Custodia, Frits Lugt Collection in Paris was the ideal job for me. As one of the few French specialists in the field of Dutch art, there was no better environment for me to cultivate my love for and knowledge of the artists of the Early Modern Netherlands than the institution founded in 1947 by the great Frits Lugt (1884–1970) and his wife. His accomplishments as an art historian and as a collector inspire me and my colleagues every day.

The administrative structure that the Lugts chose was probably inspired by examples they had seen in the USA. They had spent four years there with their children during the Second World War, while many works of art that had remained in their Dutch home were stolen by their own secretary. This experience prompted Jacoba and Frits Lugt to create a foundation that would not only take care of their superb collection but also conserve it in perpetuity thanks to an endowment scrupulously protected by our two treasurers and our board in the Netherlands. The Fondation Custodia can therefore continue to preserve and enrich the collection.

The core of the collection is made up of drawings and prints acquired with great expertise and passion by Frits Lugt. But the collector also assembled some 250 Dutch and Flemish paintings. These are displayed in the rooms of the Hôtel Turgot where most of the curatorial staff perform our duties. My office is therefore one of the most beautiful I have ever encountered: from my desk I can admire the paintings by Moyses van Wtenbrouck or Roelandt Savery – and turning my head to the left, I see the Portrait of Hugo de Groot by Jan van Ravesteyn above the Book Still Life painted by Jan Davidsz. de Heem in Leiden in 1628. A truly inspirational place to work! 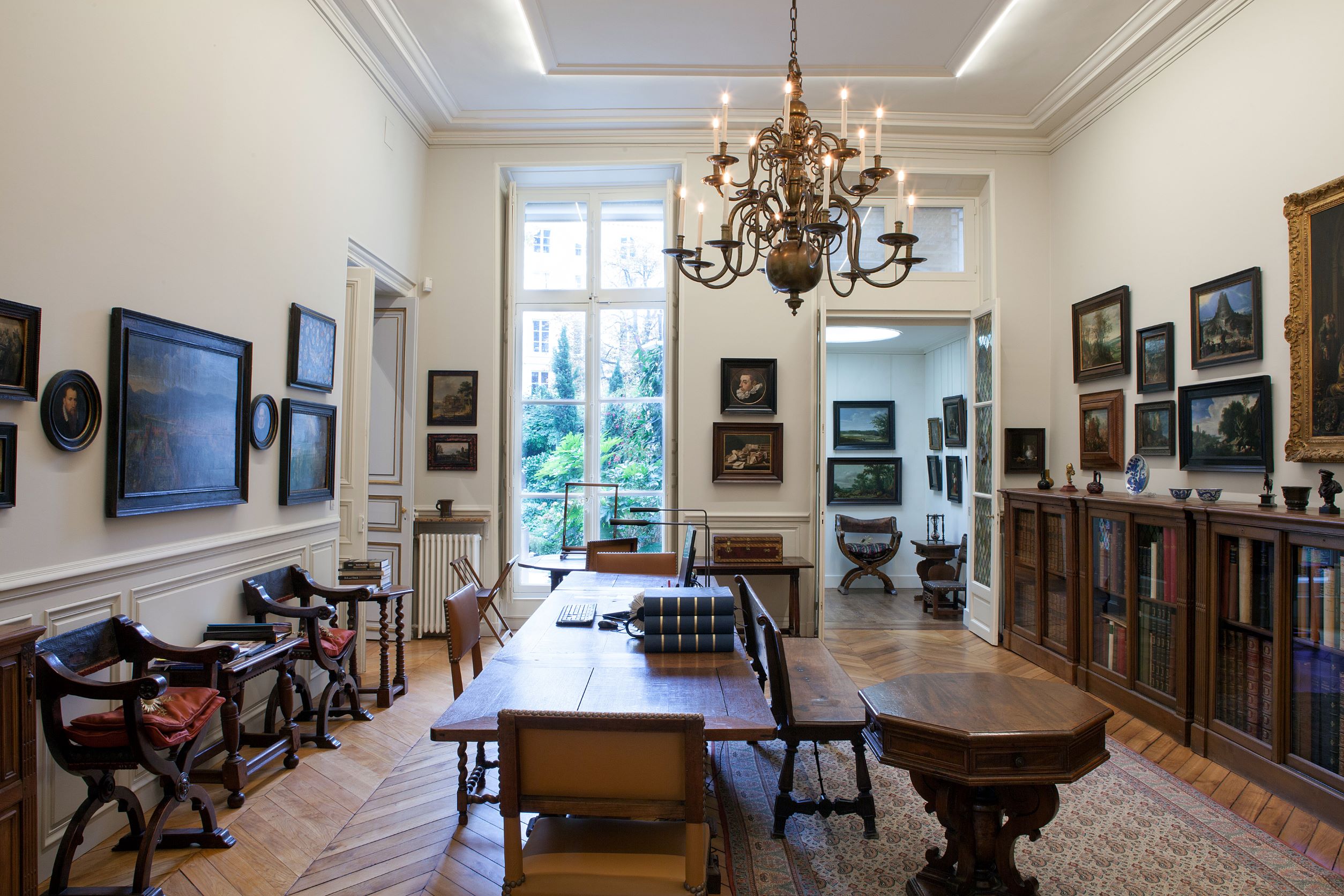 Soon after my arrival in 2007, our then director, Mària van Berge, entrusted me with curating my first exhibition for the Fondation Custodia. This show, in 2009, was dedicated to the Dutch and Flemish paintings of the Musée des Beaux-Arts in Rouen, one of France’s finest regional museums, with a very rich collection. This project followed on from three earlier exhibitions and catalogues raisonnés of paintings in the Northern Netherlands at the museums of Quimper, Lyon, and Montpellier, the Fondation Custodia being the hub in France for its network in the Netherlands and Belgium and its specialist staff.

The Fondation Custodia has a fairly small team, certainly considering the many exhibitions, publications and scientific projects it produces. As a result, the curator’s job is extremely varied, which makes my daily activities all the more attractive. In my fifteen years at the Fondation, I have been involved in many exhibitions and publications, especially those relating to the art of the Northern and Southern Netherlands. Most have been dedicated to drawings – the field with which the Fondation is traditionally associated – from sister institutions including the Uffizi in Florence, the Hamburger Kunsthalle, the Museum Boijmans Van Beuningen, and the De Boer Foundation in Amsterdam. One of my favorite projects was the Hieronymus Cock exhibition that we organized with M in Leuven and the Royal Library of Belgium. In my own little pantheon, it is surpassed by the exhibition Drawings for Paintings in the Age of Rembrandt that we produced in partnership with the National Gallery of Art in Washington in 2016. It was a unique experience to collaborate with leading scholars such as William W. Robinson, Peter Schatborn, and Arthur Wheelock.

Since my arrival at the Fondation Custodia, I have taken part in numerous conservation projects. Together with our director Ger Luijten, I had most of the Dutch and Flemish paintings cleaned and, in some cases, restored. We also started to reframe many of them, looking for the perfect frame of the era. Ger Luijten’s eye, sharpened by his many years at the Rijksmuseum, saw how much a seventeenth-century painting could gain from being put back into the kind of frame the painter would have had in mind. I still remember clearly a moment of revelation, when our Pieter Saenredam was removed from its Louis XIII gilded frame and fitted into a Dutch, ebonized fruitwood frame dating from around 1600. It was suddenly just perfect! 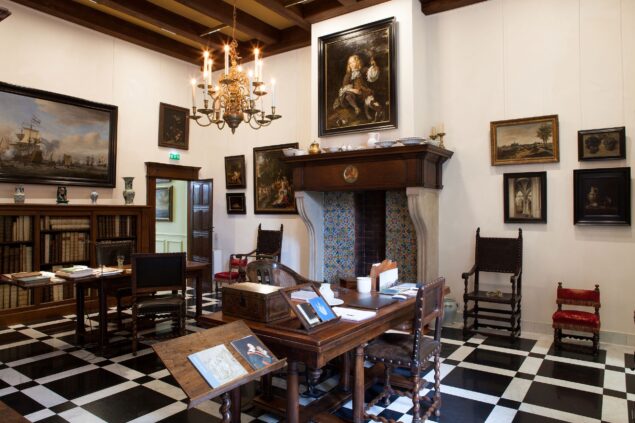 I am currently preparing the first ever monograph exhibition on the mysterious painter Jacobus Vrel. This project is really a child of CODART. It was conceived during the 2015 trip organized by CODART around the American Midwest. Those who took part told me that it was a fantastic experience. They included Quentin Buvelot (Mauritshuis, The Hague) and Bernd Ebert (Alte Pinakothek, Munich), who were particularly struck by the Vrel painting in Detroit and discussed it there with Gerdien Verschoor. In consequence, when Bernd and I met in Paris later that year, he suggested that we collaborate on a book and exhibition on this fascinating artist, one of whose most beautiful paintings hangs at the Fondation Custodia. We were soon joined by Quentin  and we worked in close partnership until the monograph was published in May 2021. The exhibition was one of the many victims of the COVID-19 pandemic. It had to be rescheduled several times and was unfortunately cancelled by the Alte Pinakothek. However, I am thrilled to say that it will finally be displayed in 2023, both at the Mauritshuis and the Fondation Custodia.

After this project, which has taken up so much of my energy for many years, I would like to return to the graphic arts and in particular to our wonderful collection of seventeenth-century Dutch drawings, which – aside from those by Rembrandt and his school – have yet to be published on our online database. It is probably the best ensemble of Dutch drawings in France – not in numbers but in terms of quality and to the extent that it represents the full range of the work. It is also the largest ensemble of drawings within our collection. They are still kept in their original albums, in accordance with Frits Lugt’s wishes. It was a prescient decision, as shown by the recent discovery of the so-called “Mondrian effect” at the Rijksmuseum’s conservation studio: window mounts stacked in modern conservation boxes create a micro-climate that discolors the sheets.

Over the past seven years I have worked with my colleagues on the restoration of many of the albums and reorganized those containing seventeen-century Dutch drawings. Next comes the task of providing each one with a description, after which they can be made available for online research and will be accessible to a wider public. 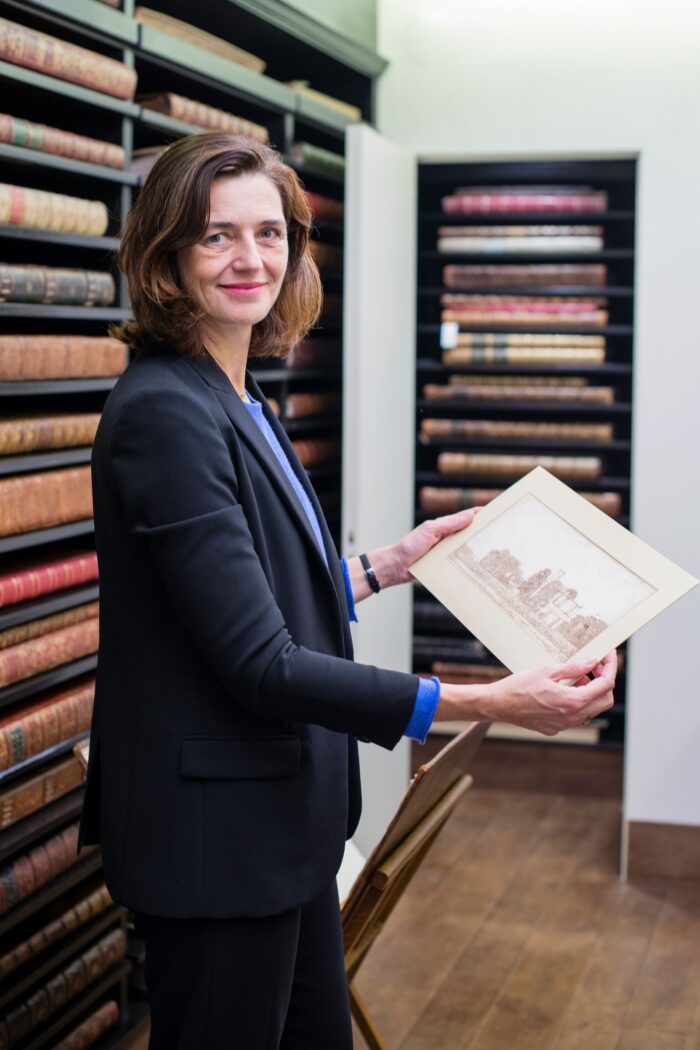 Cécile Tainturier holding the drawing by Willem Buytewech The Ruins of the Castle of Spangen in the old masters’ drawing safe. Photo © Yannick Pyanee 2022

At the same time, my colleague Rhea Sylvia Blok and I will be preparing an exhibition on our Dutch landscape drawings, revisiting the catalogue published in 1968 by Frits Lugt’s brilliant assistant Carlos van Hasselt, who served as the first director of the Fondation Custodia after the collector’s death. This show was a milestone in the history of cataloguing Old Master drawings, setting a standard for scholarly exhibitions in this field. It was also the first overview of Dutch landscape drawings of the seventeenth century, and returning to it may well be the perfect occasion on which to take stock of the advances made in this area in the past fifty years.

Cécile Tainturier is Curator at Fondation Custodia, Collection Frits Lugt in Paris. She has been a member of CODART since 2007 and a member of the editorial board of CODARTfeatures since 2019.